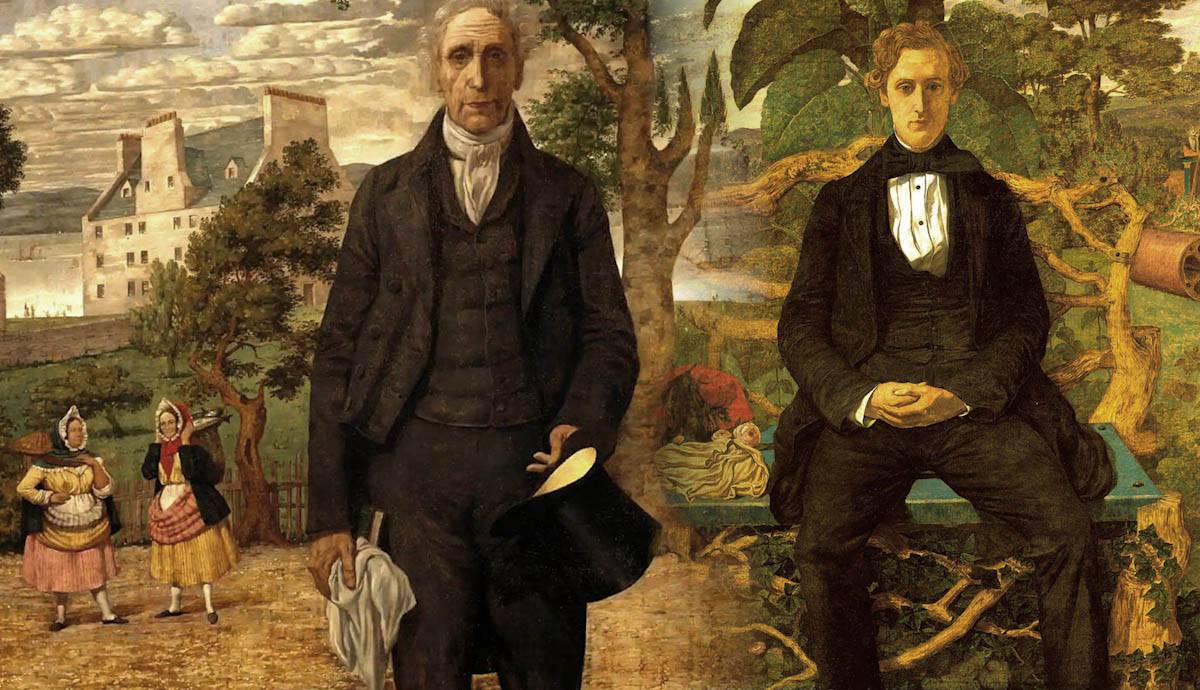 Richard Dadd was a Victorian era painter whose life and artistic career were characterized by tragedy, patricide, and otherworldly innovation in the imaginative subgenre of 19th-century fairy painting. Born in 1817 in Kent to a large family, Dadd was considered an artistic prodigy from early childhood. At age seventeen, Dadd moved to London after being admitted to the Royal Academy of Arts as a student. Keep reading to explore the unusual yet impactful life and career of Richard Dadd, from his ambitious beginnings as a young artist in London to the debilitating mental illness that confined him to asylums and inspired his most fascinating fairy paintings.

From the very start of his career as an artist, Dadd’s paintings were imaginative and unexpected. This attracted public intrigue while defying categorization within the mainstream and avant-garde art movements of his time. Later, Dadd’s fairy paintings, with their obsessively painted details, fantastical fairy characters, otherworldly scenes, and mystifying meanings, dazzled exhibition goers during and long after the artist’s lifetime.

Like many young adult painters in Victorian-era Britain, Richard Dadd had grown tired of the hierarchy of art imposed by institutions like the Royal Academy of Arts, which favored history painting as the highest form of art. In the late 1830s, before he became interested in fairy painting, Dadd formed a group of avant-garde artists called “The Clique” with fellow art students in London.

Instead of practicing academic high art, members of The Clique favored genre painting, which was considered one of the least important types of art by the Royal Academy because it depicted ordinary subjects and everyday life. They cited William Hogarth, a controversial 18th-century British genre painter, as an inspiration. The Clique also believed that art should be judged by the public and not according to academic standards of high art, which they viewed as too rigid and out of date.

The Clique formed a sketching club, where they would meet together to make drawings on a common theme and then ask non-artists to judge the resulting works and select the best of the session. The group only stayed together until the early 1840s, after which each member of The Clique, except for Richard Dadd, went on to become successful members of the Royal Academy. The Academy was known at this time for its opposition against the activities of the more famous avant-garde group of Pre-Raphaelite artists.

Before Pursuing Fairy Painting, Richard Dadd Was Interested In Orientalism

As his involvement with The Clique came to an end, Dadd’s burgeoning artistic career took a direction all its own. Dadd embarked on a grand tour of the Middle East to immerse himself in the style and subject matter of the Orientalist style of painting. Orientalism, which refers to Western artists’ depictions and imitations of Eastern cultures and aesthetics, was a respected area of emphasis for 19th-century academic painters in Europe.

The Flight Out of Egypt depicts Mary, Joseph, and the infant Christ in a dynamic scene full of figures and bold swaths of desert landscape hues. Dadd was likely inspired by an encampment of Muslim pilgrims he visited during his travels in Damascus, a meeting point for the annual Hajj pilgrimage to Mecca. At the same time, this painting was also clearly inspired by Dadd’s travels through Egypt and the Holy Land. Like other examples of Orientalist painting from Dadd’s time, The Flight Out of Egypt is an imaginative amalgamation of unrelated locations and cultures to set an engaging and exotic stage for Western viewers to interpret the Biblical story.

It was at the end of his Middle Eastern excursion while traveling up the Nile River by boat that Richard Dadd first began exhibiting signs of distress. Dadd described his declining mental state in a letter home: “The excitement of these scenes has been enough to turn the brain of an ordinary weak-minded person like myself, and often I have lain down at night with my imagination so full of wild vagaries that I have really and truly doubted my own sanity.” If he hadn’t become famous for being institutionalized and for his fairy paintings, Richard Dadd would likely have been remembered for his travel-inspired Orientalist paintings, much like his contemporary William Holman Hunt.

After Murdering His Father, Dadd Was Hospitalized for Life

Upon returning home to England from his tour of the Middle East, Richard Dadd was diagnosed with an unsound mind. Hoping to recover, Dadd relocated to rural Kent with members of his family. However, his psychological distress and paranoid delusions only worsened. Dadd tragically ended up killing his own father with a knife after believing him to be possessed. After a failed attempt to flee, Dadd confessed to the crime.

Dadd was among the first convicted criminals in Victorian-era Britain to be declared insane rather than found guilty of murder, which would have meant execution. Instead, Dadd was sentenced to be institutionalized at an asylum for the remainder of his life. It is speculated that Dadd likely had schizophrenia, a condition that seemed to run in his family.

When it came to recognizing and dealing with mental illness, the Victorian era made many progressive societal changes. The 19th century saw the establishment of new asylum facilities in Victorian-era Britain, which allowed individuals determined to be criminally insane to avoid mistreatment in prison and instead receive treatment while confined to asylums, which were viewed as places of refuge and recovery. While antipsychotic treatments available during the Victorian era did little to quell Dadd’s psychological symptoms, Dadd’s doctors encouraged him to continue painting, which he did throughout his 42 years of confinement. Dadd’s portrait, Sir Alexander Morison, depicts one of the physicians who oversaw his mental healthcare.

Because Richard Dadd spent the height of his career institutionalized, most of his best works were created within the walls of asylums. For example, Portrait of a Young Man depicts an unknown sitter and was completed during his sentence. The scenery is as imaginative and highly detailed as his more fantastical fairy paintings and includes a red fez hat that Dadd wore during his travels in the Middle East.

In the 1860s, Dadd was transferred from Bethlem Hospital in London to a new state-of-the-art, high-security facility called Broadmoor Hospital outside of London. There, he was outfitted with his own artist’s studio and granted additional freedoms, including access to the sprawling grounds outside, where he spent time gathering inspiration for his fairy paintings and other projects. Dadd also painted murals throughout the new facility, which have unfortunately since been lost.

Dadd lived the rest of his life comfortably at Broadmoor Hospital, where he continued working on his famous fairy paintings until his death in 1886 at age 68. Broadmoor Hospital, which continues to operate as a psychiatric institution today, would later become famous for housing several celebrity patients after Richard Dadd.

Richard Dadd Was the Leader of Victorian Era Fairy Painting

Fairy painting refers to a subgenre of art depicting fantastical fairy subjects from myths, legends, and the imaginations of artists. It was especially popular in Britain from the 1840s through the 1870s, but before the Victorian era, British artists like William Blake and Henry Fuseli had already dabbled in fairy painting. The widespread fascination with Spiritualism and the supernatural during the Victorian era helped popularize Richard Dadd’s otherworldly fairy paintings. The 19th century also saw a resurgence of public interest in Shakespeare, especially fairy stories like A Midsummer Night’s Dream.

Puck is Richard Dadd’s first completed example of a fairy painting and was exhibited in 1841 along with another fairy painting, establishing his reputation as a leading artist of the time and as the figurehead of the Victorian era fairy painting genre. The painting depicts Puck, a fairy character from A Midsummer Night’s Dream, surrounded by dancing tiny figures. This fairy painting was completed before Dadd’s mental illness and hospitalization, but he continued to paint the subject matter and in the style of fairy painting throughout his career.

Richard Dadd achieved incredibly fine detail in both his oil and watercolor works by stippling, an additive painting technique borrowed from the tradition of miniatures that involves subtly building colors using a sponge or stippling brush to pile on thin layers. Dadd painted The Fairy Feller’s Master-Stroke over a period of nine years. While the canvas remains technically unfinished, it is widely considered to be Dadd’s magnum opus. Over the course of nearly a decade, Dadd worked on one tiny section of the painting at a time, creating several sketches and layering so much paint that the canvas is almost three-dimensional. The detail is exquisite and minute, especially considering the relatively small size of the canvas.

Dadd was transferred between institutions before he could officially finish this fairy painting, so he penned a poem in an attempt to explain some of the imagery and characters he painted. The Fairy Feller’s Master-Stroke contains a swath of characters from Dadd’s imagination, including the Fairy Feller, who raises an ax. The composition also includes the Pope, Dadd’s late father, and Shakespeare’s Oberon and Titania. While Dadd’s poem described each of these characters in detail, it provided no clues into the painting’s overarching narrative or intended meaning.

Despite being shrouded in mystery, this fairy painting went on to inspire many creators, including the early-20th-century artists who spearheaded Surrealism and Queen frontman Freddie Mercury. Having discovered The Fairy Feller’s Master-Stroke at the Tate Britain Gallery in London and pored over the accompanying poem, Mercury was inspired to write a hit song by the same name, proving the enduring impact of Richard Dadd’s fantastical 19th-century fairy paintings.