HomeAncient HistoryRoman Trade with India and China: The Lure of the East 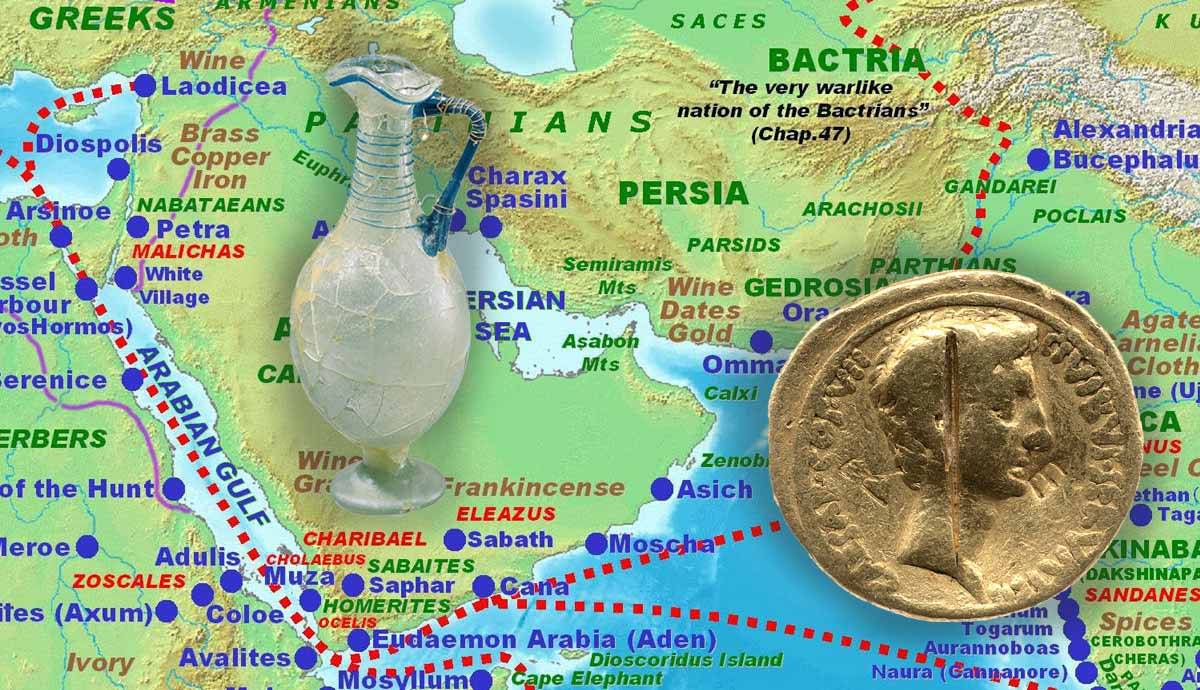 During the first and second centuries CE, the Roman Empire reached its apex. Its famed legions protected vast lands, while the imperial navy policed the Mediterranean, known to the Romans as “our sea” — Mare Nostrum. This unprecedented period of peace led to a population boom. The estimates range from 60 million in the first to 130 million people in the mid-second century — over a quarter of the world’s population!

To satisfy the needs of its wealthy citizens, Rome established and extended trade routes to the East. Every year, ships laden with Mediterranean commodities would sail to the ports of India and China, bringing back exotic luxuries, such as cinnamon, ivory, pepper, and silk. The long-distance trade between Rome and the East would last for centuries, facilitating economic, cultural, and diplomatic relations. However, the weakening of the Roman Empire’s economy, followed by the Arab conquests in the mid-seventh century, resulted in the loss of Egypt, bringing Roman trade with the Far East to its end.

Maritime trade between Mediterranean lands and the East has a long history, predating Roman rule. Already in the third millennium BCE, ancient Egyptian ships reached the lands on the edge of the Red Sea, bringing back the precious incense used in religious rituals and mummification. In the following centuries, the pharaohs established harbors on the Egyptian Red Sea coast to provide shelter and logistics for their trade fleet. According to ancient records, Queen Hatshepsut dispatched a fleet to a distant and fabled land of “Punt” (present-day Somalia). The African expedition was more than successful, bringing gold, ivory, myrrh, and frankincense back to Egypt.

The Persians, too, could not resist the lure of the East. Nor could Alexander the Great and his successors. After taking control of Egypt, the Ptolemaic kings had rebuilt the old ports along the Red Sea shore, using them as a transit station for African forest elephants, a core of their military. This infrastructure would later play a key role in facilitating and protecting the Roman Empire’s trade with the East. According to Strabo, in 118 BCE, the Ptolemies established the first trade route with India, following the rescue of a shipwrecked Indian sailor. However, trade with the East remained limited in scope. The dangers of long-distance sailing, and low profits (the Ptolemaic rulers bought the goods at artificially low prices), made the voyage a risky prospect.

The situation finally changed with the arrival of Roman rule. After annexing Ptolemaic Egypt in 30 BCE, Octavian — soon to be the first Roman emperor Augustus — made Egypt his personal property. He also took a personal interest in the maritime trade with the East. To make the venture more attractive to merchants, Augustus removed the old Ptolemaic trade restrictions and ordered the legions to build roads through the desert. Suddenly, the passage to India became a profitable venture. According to Strabo, during Augustus’ reign, the number of ships sailing to India increased from 20 to over 120 vessels. Soon, exotic oriental goods flooded Mediterranean markets, with wealthy Romans having access to spices, expensive fabrics, precious stones, slaves, and exotic animals.

Besides the increase in trade and commerce, establishing a permanent route to India (and beyond) resulted in diplomatic contacts between Rome and the East. Historian Florus tells us that Indian ambassadors traveled to Rome to discuss an alliance with the emperor. While the alliance had little impact, considering the enormous distance between the Mediterranean and the Subcontinent, these contacts had a profound impact on the ideology of the nascent Roman Empire, further solidifying Augustus’ legitimacy. The arrival of oriental embassies also lent credence to the popular phrase “Imperium sine fine” — “an empire without an end”.

Our primary source for Roman trade with the East is the Periplus of the Erythraean Sea. Written in 50 CE, this navigation manual describes in detail the passage through the Red Sea corridor and beyond. It contains a list of main ports and anchorages, the distances between them, length of travel, and the voyage description. It took about 20 days for the ships to sail from Ostia and Puteoli (Italy’s main ports) to Alexandria. Three weeks later, the goods (brought via the Nile canal or overland by camel caravans) reached the Red Sea ports of Berenike and Myos Hormos.

Here, goods were loaded onto ships for their long voyage to Africa and India. After passing through Bab-el-Mandeb, the fleets diverged. Ships bound for African ports would sail around the Horn of Africa and proceed southwards. The vessels destined for India sailed eastwards to the ports of Aden and Qana on the southern coast of Arabia. Leaving the safety of the coastline, the ships caught summer monsoon winds, sailing across the open waters of the Indian Ocean to India.

Seventy days after leaving Egypt and after two weeks braving the peril of the open seas, the Roman merchant ships would see the first sight of Indian land. The first port of call was Barbaricum (near modern-day Karachi, Pakistan). This was a transit port for goods coming from the hinterland and far East — including Chinese silk, Afghan lapis lazuli, Persian turquoise, and other precious stones and expensive linen.

Another vital entrepôt was Muziris, the premier spice emporium (known for its black pepper and malabathrum), located on the Malabar Coast. Finally, Roman ships would reach the southernmost part of the route: the island of Taprobane (present-day Sri Lanka), whose ports acted as the transit hub for trade with Southeast Asia and China. Their ships were filled with precious goods, before the Romans headed home, reaching the familiar sights of Berenike and Myos Hormos after a year-long journey.

In the mid-second century CE, Roman ships reached Vietnam, and in 166 CE, the first Roman embassy visited China. The Middle Kingdom, ruled at the time by the Han dynasty, was an important trade partner for Rome. Its most valuable export — silk — was so prized among the Romans that they named China Seres: the Kingdom of Silk. During the Roman Republic, silk was a rarity. In fact, it was so rare that, according to Florus, the silken Parthian standards dazzled the legions of Marcus Licinius Crassus during the fateful battle of Carrhae. By the second century, silk became a common sight in Rome, despite its prohibitive cost. The luxury commodity was in such demand that Pliny the Elder blamed silk for putting a strain on the Roman economy.

Pliny’s complaints might be exaggerated. Yet the silk trade, and eastern trade in general, caused a significant outflow of wealth during the first two centuries of the Roman Empire. The extent of trade is clearly visible in the large hoards of Roman coins found throughout India, especially in the busy emporia in the south. Smaller amounts of coins have been found in Vietnam, China, and even Korea, which further confirms the Tamil merchants’ role as an intermediary between the two mighty empires.

Another piece of the puzzle is a shipwreck of a massive Roman cargo ship found near Madrague de Giens, off the southern coast of France. The 40 meter (130 feet) long, two-mast merchantman carried between 5, 000 to 8, 000 amphorae, weighing up to 400 tonnes. Although the shipwreck was found in the Western Mediterranean, it proves that the Romans had the technology and skills to construct a large ocean-going vessels, ones that could reach the far-flung ports of India and China.

The End of Roman Trade with the East

While the maritime route to India and China was not Rome’s only trade route to the East, it was the cheapest and most reliable one. The overland route, also known as the Silk Road, was largely beyond Roman control, with Romans having to pay hefty tariffs to Palmyran and Parthian intermediaries. Aurelian’s conquest of Palmyra in the late third century CE re-established imperial control of the westernmost part of this route. However, the rise of the Sassanids in Persia, and the increased hostility between the two empires, made overland travel a difficult and dangerous affair. Similarly, the Persian Gulf route remained out of the Roman Empire’s reach.

Thus, the maritime trade route through the Red Sea corridor and the Indian Ocean retained its importance. Ships continued sailing, albeit in smaller numbers. In “Christian Topography,” the sixth-century monk and former merchant Cosmas Indicopleustes described his sea voyage to India and Taprobane in detail. Around the same time, the Romans scored a massive coup by smuggling silkworm eggs to Constantinople, establishing a silk monopoly in Europe. The lure of the East remained strong.

Then tragedy struck. The loss of Egypt to the armies of Islam in the mid-seventh century brought an end to 670 years of Roman trade with India and China. Only in the fifteenth century, after the Ottoman Turks cut off all the routes to the East, would the Europeans restart the maritime trade route to India, ushering in the Age of Discovery.