HomeStoriesWhat Was the Silk Road & What Was Traded on It?

The Silk Road between Asia and the Mediterranean was maintained for over 2,000 years, as the longest network of routes in the premodern world. 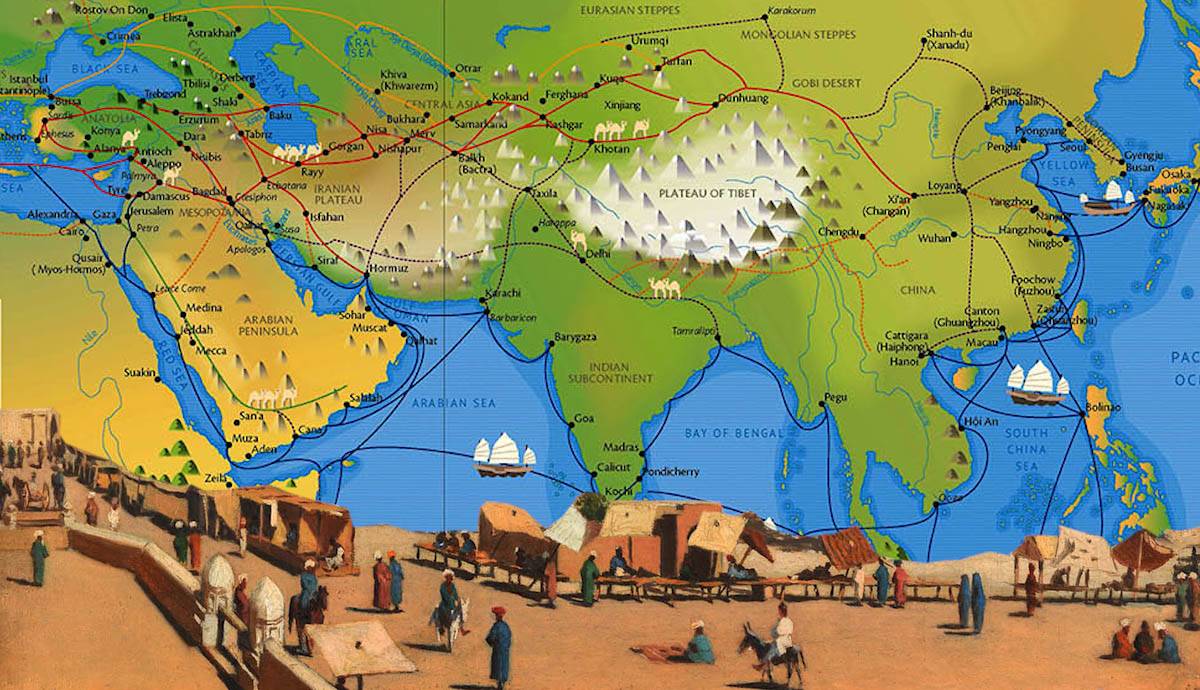 The Silk Road has been a link between China, Central Asia, and Europe for two thousand years. Its name evokes fascinating images of oases in the desert sand, of merchants trading in fabrics and spices, and of wondrous journeys across dangerous lands. The Silk Road shaped history not only as a trade route that stretched over the vastness of Eurasia, but also through the political and social upheaval that came along it.

What is the Silk Road?

Describing the history of the millennia-old Silk Road is a challenging undertaking; it is a reminder of the difficulties the traveling merchant once faced with his camel caravan, as they traveled across waterless, scorching hot desert stretches and the highest mountain ranges on earth. This is especially difficult because the Silk Road was not a continuous stretch of road, but a huge network of unmarked and frequently changing routes.

The Silk Road was not even known in premodern times, the magical name being a 19th century creation when the West was fascinated by the exotic and oriental East. It was first coined in 1877 by the German geographer Baron Ferdinand von Richthofen. Many of Richthofen’s students became important explorers along the Silk Road, among them Sven Hedin, Albert Grünwedel, and Albert von Le Coq. The naming became the general standard in 1936, when Sven Hedin’s book about his discoveries in Central Asia was titled “The Silk Road”.

The best-kept secret of East Asia in ancient times was the manufacture of silk. Chinese emperors recognized the enormous economic opportunities that would come from monopolizing the luxury product. From around the time of Christ, the export of silkworm eggs and mulberry seeds from China was forbidden under the death penalty. But silk was not the only thing brought along the Silk Road. Other commodities traded included spices, tea, precious metals, clothes, and, above all, paper. Religions, languages, technologies, cultural customs, and even diseases were also brought along the routes.

Due to geographic and cultural factors, the Silk Road can be divided into northern and southern branches. The Northern Silk Road is the more famous of the two. From the starting point of Chang’an (modern Xi’an, China), travelers would go west through the Gansu Corridor to Dunhuang. There, the caravans might go northwards into the Mongolian Plateau, to the great Mongol city of Karakorum, or they would cross the Taklamakan Desert, moving from one small oasis town to the next westwards into Central Asia and on to the Mediterranean Sea.

The Southern Silk Road (also known as the Tea-Horse Road) extended from the city of Chengdu in Sichuan Province, China, south through Yunnan into India and the Indochina Peninsula, and extended westwards into Tibet. This was an important route for the tea trade throughout South China and Southeast Asia but also contributed to the spread of religions like Taoism and Buddhism across the region.

These routes were extremely dangerous. Travelers would have to navigate wars, bandits, earthquakes, and sandstorms. The Chinese monk Faxian, having returned from his adventurous journey to India, reported as early as 414 CE of the agonizing and inhospitable challenges of the Taklamakan Desert:

“In the desert were numerous evil spirits and scorching winds, causing death to anyone who would meet them. Above there were no birds, while on the ground there were no animals. One looked as far as one could in all directions for a path to cross, but there was none to choose. Only the dried bones of the dead served as signposts.”

When Did the Silk Road Begin?

The first reliable written reports about the trade along the Silk Road concern the Chinese envoy Zhang Qian (d. 113 BCE). He traveled from Chang’an to Central Asia on behalf of Emperor Wu of the Han Dynasty. Zhang Qian had been sent to make contact with the nomadic tribes of the Yuezhi, based in the Fergana Valley (present-day Uzbekistan). The emperor hoped that the Yuezhi would become an ally against the Xiongnu, a nomadic people based in present-day Mongolia, and known to Western readers as the “Huns”.

Although the desired pact with the Yuezhi never came about, Zhang Qian brought reports to the imperial court that considerably expanded their geographical, ethnographic, and political knowledge of Eurasia. Emperor Wu was especially interested in the “blood-sweating” horses of the Fergana Valley, which were supposed descendants of the legendary horses of heaven. To get these horses, Emperor Wu sent an army of several thousand men to Fergana. This opened the way for further economic and cultural contacts between the Chinese and Central Asia, and could be considered the historic beginning of Silk Road trade.

The banners used by the Parthian army at the Battle of Carrhae (53 BCE) were the first silk objects that the Romans had ever seen, but they quickly developed an insatiable demand for the exotic fabric. In ancient Rome, the buying and wearing of silk became a symbol of wealth and status because of its rarity and cost. The Romans called China the State of Serica, a name derived from the Latin word for silk.

It is very unlikely that any traders ever made the 6,000 km journey all the way across the Eurasian landmass. Silk and other goods were instead traded by middlemen between the various kingdoms and tribes of Central Asia. One of these was the kingdom of Kushan (1st century BCE – 3rd century CE), which occupied a vast territory that linked the Roman and Persian empires with China.

With the fall of the Han dynasty in 220 CE, and the decline of the Roman Empire due to the pressure of Central Asian nomadic tribes, the balance of power along the Silk Road changed. Lucrative trade relations between the Hephthalites and Persian Sassanids were negotiated by the foremost trading people of the Silk Road: the Sogdians of Samarkand.

The Golden Age of the Silk Road

While Europe sank into the chaos of the Dark Ages and the Byzantine Empire came under increasing pressure from the Arabs, China consolidated itself and flourished under the Tang Dynasty (618-907 CE). New empires emerged along the Silk Road. The Göktürks established a great empire that extended from Mongolia to Bactria, and controlled the silk trade along the Silk Road westward to the Sassanid Empire and the Caspian Sea. The Arabs also brought about a fundamental transformation of Central Asia, as they expanded Islam from Lisbon to Samarkand.

Under the Tang, there was a period of great prosperity along the Silk Road, as their openness and tolerance towards foreign civilizations brought about a golden age in China. However, during this time, the various empires of Central Asia came into violent contact with each other. One of the largest battles was the Battle of Talas (751 CE) between Tang China and the Abbasid Caliphate. According to legend, prisoners taken from the defeated Chinese army introduced the art of paper production to Samarkand. Sogdian merchants spread this new technology throughout the Islamic world, though it would not be until the Arab conquest of Spain in the 11th century that paper reached Europe.

The 8th to 12th centuries CE can be characterized as a time of fragmentation along the Silk Road. This lack of stability negatively affected trade and travel. That changed when Genghis Khan (1162-1227) united the various tribes of the Mongol steppe. He established an empire that, due to its sheer size, made trade along the Silk Road safe again.

The first contact between Europe and the Mongols was of a warlike nature. The Mongols swept into Eastern Europe with vehemence and immediacy that shocked the Europeans. The victory of the Mongols in the Battle of Legnica (1241) caused such horror in Europe that the European chroniclers of the time believed that the Biblical end of the world had come. It was by pure chance that the Mongols withdrew after this battle, due to succession disputes that arose after the death of the Great Khan Ögedei.

European Missionaries and Merchants on the Silk Road

Despite the robbery and manslaughter that heralded the coming of the Mongols, many European powers did not want to give up hope of a possible alliance with the Mongols. The first detailed information about the Mongols from a European perspective was written in the 1240s by Giovanni da Pian del Carpine, a Franciscan missionary sent by Pope John IV to bring a letter to the Great Khan Güyük. Another famous Christian missionary to have traveled across the Silk Road was Wilhelm von Rubruck, who told wonderful tales of the Mongol capital at Karakorum after his six-month stay there.

Where missionaries can go, traders can follow, and no European traveler is better known for their association with the Silk Road than Marco Polo. The son of a Venetian merchant, he traveled to China with his father and uncle to visit the court of Kublai Khan. The effect of his extensive and detailed travelogue was enormous. It introduced Christian Europe to the ancient cultural land of China for the first time. For many explorers and merchants, it formed their entire basis of knowledge about Asia.

What is the New Silk Road?

The New Silk Road project began in 2013 when Chinese President Xi Jinping announced his “Belt and Road Initiative”. As the English name “One Belt One Road” indicates, this New Silk Road is actually two planned trade routes: a maritime one from China via South Asia to Africa (the Maritime Silk Road) and a northern land route (the Silk Road Economic Belt) from China through Central Asia, Iran, Turkey and Moscow to Europe.

In the tradition of the ancient Silk Road, China would like to connect Asia and Europe with roads, rail networks, shipping lines, ports, industrial corridors, and communication networks. Securing the large oil, precious metal, and gas reserves in Central Asia is another major motive that not only drives China, but also the USA with its “Silk Road Strategy Act” and the EU, which has been trying to expand the infrastructure between Europe and Central Asia since 1993 with their own projects.

The Silk Road was maintained for over two thousand years as the longest network of routes in the premodern world between Asia and the Mediterranean. Great empires came and went, but the trade routes remained. Even if the ambitious New Silk Road initiative may not be realized in the comprehensive framework imagined by the Chinese leadership, it shows the strong political will of a country that has once again become the epitome of a “global player”. Of course, it is not the first time in history that China has risen to become a leading world power – they remember the great times of the Han and the Tang Dynasties when China dominated large parts of the ancient Silk Road. 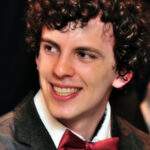 By Tomas SkinnerMA Asian Studies, MA ArchaeologyTomás works as a field archaeologist and is due to start a Master's program in Regional and Urban Planning this September. His professional background in archaeology, critical heritage studies, and museology has given him a deep interest in the importance of heritage to individuals, communities, and nation-states. His main research interest is in the study of the Silk Road – the history, archaeology, art, and contemporary cultures of Central Asia and East Asia. Other interests include UNESCO World Heritage, urban heritage and urban renewal, Irish heritage, the material culture of Chinese literati, and global tea culture.