For two centuries, the four ancient empires of Eurasia enjoyed a long period of peace and prosperity, trading freely along the Silk Road, creating the first period of globalization. 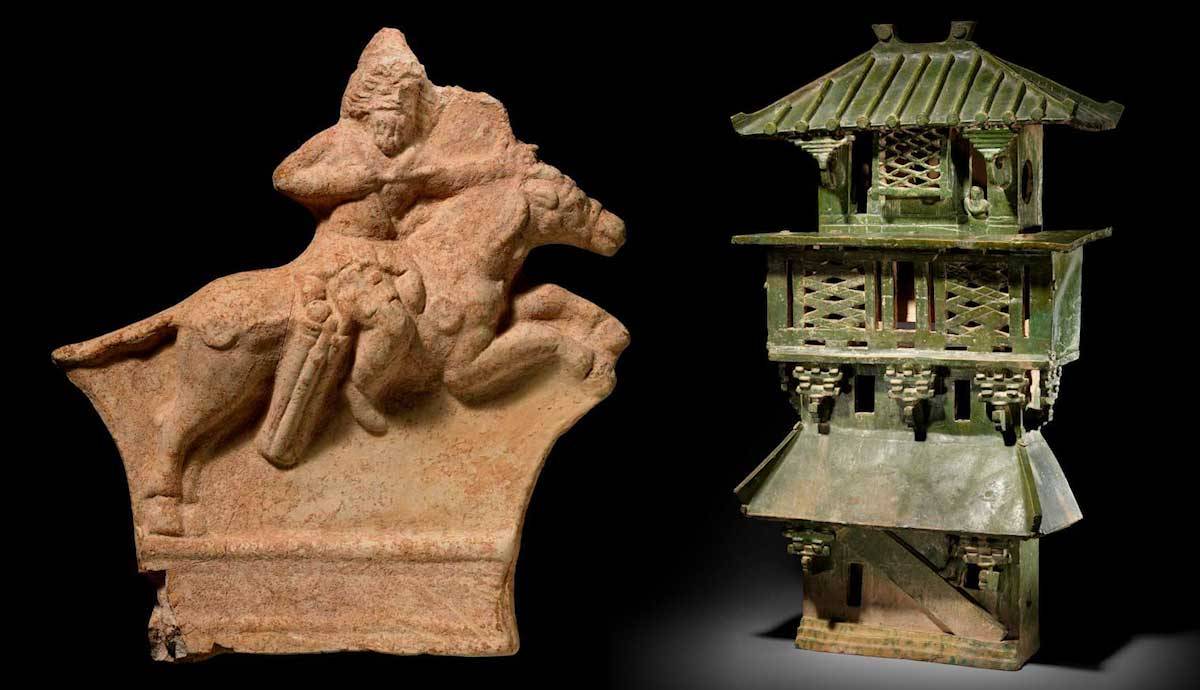 The first and second centuries CE was a time of unprecedented peace and prosperity for all the ancient empires of Eurasia (comprising Europe and Asia). China flourished under the Han dynasty in the East, exporting precious commodities (especially silk) along the iconic Silk Road. In India, the Kushan Empire spread its influence across the Subcontinent, taking on a vital role in supporting Indian Ocean trade. Parthia (a historical region located in northeastern Greater Iran), another powerful Empire, ruled over a vast area, stretching from Mesopotamia to the Iranian Plateau.

Finally, in the West, the Roman Empire reached its greatest extent, spanning three continents at its height. This “Age of Empires” created the first period of globalization. People, goods, ideas, and even disease and devastation freely traveled these silken strands, in greater numbers and with greater speed than ever before, across the vast expanse of Eurasia.

1. China: An Empire at the Beginning of the Silk Road

In 207 BCE, the Han dynasty overthrew its predecessor and took control of China. Han emperors retained much of the imperial bureaucracy of the Qin dynasty, but they reduced the harshness of imperial edicts and lowered taxes. They also promoted Confucianism as a state ideology, encouraging morality and virtue and avoiding governing through fear and oppression. By doing this, the Han strengthened the Empire’s internal stability and boosted its economy. After they consolidated their power, Han emperors began to expand their imperial territory. However, the Xiongnu — fierce warriors skilled in horsemanship and archery — halted their attempts to annex the western regions. After years of paying tribute, and indecisive fighting, the imperial army, bolstered by the “heavenly horses” of Ferghana, defeated the Xiongnu in 119 BCE.

China now controlled access to the Silk Road and could begin to benefit from highly lucrative trade with the empires of the West. Yet, due to the vast distances between these states, the merchants leading the caravans were predominantly people from Central Asia, most notably the Sogdians. In 90 CE, however, Han emperors expanded their influence further west, conquering the Tarim basin and reaching the border of Parthia — one of its main partners on the Silk Road. To break up the Parthian monopoly on transcontinental trade, general Ban Chao dispatched an expedition to Rome. Unfortunately, the expedition’s failure prevented an alliance between the two empires. But the envoys brought back valuable information on the lands to the west of China, including more info about the Roman Empire, which remained one of its central trade partners centuries after the Han dynasty collapsed.

2. The Kushan Empire: A Cosmopolitan Society

After the Han cavalry defeated the Xiongnu and expelled them from China, these nomad warriors turned against their neighbors, the Yuezhi, driving them westwards from the great steppe. The Yuezhi started their long journey to their new homeland and eventually settled in the area occupied by the Hellenistic Kingdom of Bactria in 128 BCE. For nearly two centuries, the Yuezhi consolidated their power in the region. Then about the middle of the first century CE, they advanced first into Kashmir and then into northwest India.

The Kushan Empire (modern-day territory of Afghanistan, Pakistan, Uzbekistan, and northern India), the dynasty by which name the Yuezhi was known in India, soon ruled over much of the Northern Subcontinent. Kushan monarchs adopted the elements of Hellenistic, Persian, and Indian culture. They introduced the modified Greek alphabet and minted the coinage following the Greek model. In addition, the Kushans adopted local beliefs and customs, blending Greek cults, Zoroastrianism, Buddhism, and Hinduism. At its height, in the second century CE, the Kushan Empire bordered both China and Parthia, acting as an intermediary on the Silk Road. The Kushans also played a significant role in Indian Ocean trade. Barbaricum, located in the Indus delta, became an important seaport and a transit area for trading goods between the Roman Empire, India, and China until the seventh century CE.

3. Parthia: Where the East and West Met

The largest Hellenistic state — the Seleucid Empire — encompassed a vast territory, from the Himalayas to the shores of the Mediterranean. However, costly wars with the Ptolemies of Egypt gradually weakened Seleucid control over the eastern part of their realm. In about 250 BCE, the tribe of Parni, led by one Arsaces, exploited the opportunity, using the absence of Seleucid forces to take control of the satrapy of Parthia, situated between the Oxus (Amu Darya) river and the southern shores of the Caspian Sea. The following century saw almost constant fighting between Parthian and Seleucid forces, with the Parthians grabbing more and more territory. Finally, in 138 BCE, the Parthian Empire reached the Euphrates in the West and Bactria in the East.

Although originating in Iran, Arsacid rulers adopted the art, architecture, religion, and even the royal symbols of their multicultural subjects, encompassing Persian, Hellenistic, and regional cultures. By the late first century BCE, the Parthians became a major power.

Parthian prosperity was derived mainly from the closely guarded transit of trade from the Silk Road and from their powerful cavalry. While in the East, the Arsacids lost Bactria to the Kushans, in the West but they managed to hold the Romans at bay, dealing the legions a humiliating blow at Carrhae in 53 BCE and killing their commander, Marcus Licinius Crassus. Despite continual dynastic struggles and the growing Roman threat, which culminated in the short-lived conquest of Emperor Trajan, the Parthian state remained the dominant power in the middle of the Silk Road route until it fell to the Sassanids in the third century CE.

4. The Roman Empire: The Mediterranean Superpower

The last of the Big Four, located at the western terminus of the Silk Road, was the Roman Empire. After defeating Carthage (Tunisia) and securing control of the entire Mediterranean, Rome looked East toward the wealthy Hellenistic monarchies in Egypt and Asia. In 63 BCE, Pompey the Great eliminated the remnants of Seleucid power by conquering Syria. Then, in 31 BCE, Octavian, soon to be the first Roman emperor Augustus, destroyed Ptolemaic naval power at Actium. A year later, Rome annexed Egypt, erasing the Ptolemaic kingdom from the map. The Roman Empire now had access to the Silk Road, at just the right time. Besides the enormous wealth of its new eastern provinces, their Spanish mines further boosted the imperial economy and, later, the gold of Dacia.

Despite its best efforts, Rome could not remove the Parthian obstacle in order to establish direct contact with China. In addition, the powerful and wealthy client states of Palmyra and the Nabatean Kingdom, centered in Petra, further limited Roman control over the overland trade along the Silk Road. In 105 CE, Emperor Trajan incorporated the Nabateans into his Empire, increasing the Roman hold over the western segment of the Silk Road, while Emperor Aurelian finally annexed Palmyra in the mid-third century. By that time, however, Parthia was no more, replaced by a mighty and hostile Sassanid Empire. Thus, Rome had to focus its efforts on Indian Ocean trade. Over 100 ships sailed for India each year during the first and second centuries via this maritime route, carrying Mediterranean commodities and bringing back exotic goods, such as silk, spices, and precious gems.

In 116, Trajan’s legions reached the Persian Gulf, but the emperor’s death a year later resulted in the army’s withdrawal from Parthian territory. By 130, the Han military, too, retreated from Central Asia to the old frontier. In the West, Roman-Parthian relations worsened. In 163, the war began once more and was fiercer than any before. While the war was still raging, a dreadful plague broke out. It quickly spread through all empires via the Silk Road network, ruining their economies and decimating the population. Towards the end of the second century, the Roman Empire, the Han dynasty in China, the Parthian monarchy, and the Kushans, all faced grave crises. In the early third century, the Han dynasty and the Parthian royal house fell from power. However, trade continued along the Silk Road, but with much greater difficulties. Only after the arrival of the Mongols in the thirteenth century would the vast expanse of Eurasia be again united, renewing the silk ties between the continents.