At the Roman Empire’s height, ships embarked on a yearly journey to India, taking advantage of rich Indian Ocean trade. Join us as we follow the voyage of one ancient explorer. 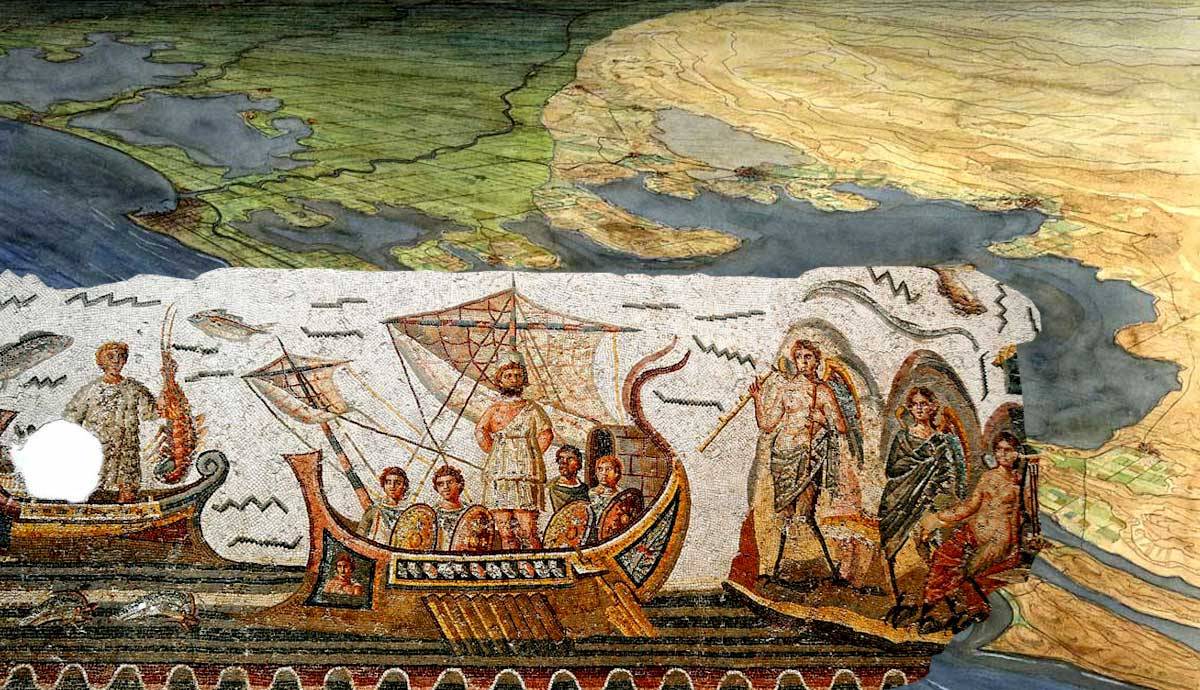 The Roman annexation of Egypt in 30 BCE brought this wealthy region under imperial control. It also gave Rome direct access to the Red Sea, opening a trade route to the East. Each year, the ships laden with Mediterranean commodities would depart Egypt and sail to India, bringing back exotic luxuries. Eastern goods transformed Roman society by flooding the markets with spices, perfumes, jewelry, and fine clothing – luxuries that the often-austere Romans had never before seen. Both elites and ordinary citizens enjoyed the fruits of the Indian Ocean trade. In fact, the demand for exotic goods was so high that it drained Rome’s coffers.

It also enriched those involved in commerce, from merchants to customs officials. And while most of ships were privately owned, carrying the goods of the individual merchants, the government was by no means left out in the cold. It took, through customs, no less than a quarter of everything that was brought in. Join our ancient explorer while sailing the Indian Ocean Trade route.

The Starting Point for Indian Ocean Trade: From Alexandria to the Red Sea

Our story begins in 40 CE, in Alexandria ad Aegyptum, the capital of Roman Egypt. Or more precisely, in its famed library. It is here that we meet Leombrotus, a Spartan. Instead of following the martial ways of his ancestors, Leombrotus decided to travel and explore the far reaches of the known world. He was no exception, as contemporary accounts mention many individuals who traveled to India not only for business but also to see the sights or enrich their knowledge. Leombrotus visited the library, to check out a copy of Strabo’s “Geography” and his account of distant India — one of few detailed accounts we have from the Roman period.

Leombrotus’ first stop on his journey East was Juliopolis. Unlike its more famous Mediterranean counterpart, dominated by the iconic Pharos lighthouse, the harbor on the Lake Mareotis served as an entry point to the Nile delta and the Egyptian hinterland. It was also the starting point for Indian Ocean trade. Here, our intrepid traveler would embark on a boat, already loaded with goods to be exported to India — such as fine Syrian glassware, Egyptian olive oil, and Campanian wine. Unlike the exotic luxuries highly sought in Rome, Mediterranean commodities were less in demand. Still, they could find their buyers among the Indian elites who had an acquired taste.

Twelve days later, after smooth and monotonous sailing up-river, Leombrotus’ boat arrived in Koptos. It was one of the most important places on the Nile, a port set at the point where a great eastward bend in the river brings it closest to the Red Sea. Koptos’ large stores were full of goods destined for Africa, Arabia, and India, or in the other direction, to Alexandria and Rome. From Koptos, merchants and other travelers would join camel caravans bound for two main Red Sea ports on the Egyptian coast — Myos Hormos and Berenice. Unlike Myos Hormos, and its foul northerly winds, Berenice was further away, but its winds were less tempestuous. Thus, it was the place from where most ships sailed east, including Leombrotus’ vessel.

Berenice: The Gates to the East

Laden with goods, Leombrotus’ caravan took twelve days to reach the Red Sea coast. Its progress along the desert road was slow but steady. Occasionally, Leombrotus could see one of many watchtowers or forts built during Augustus’ reign along the route. Despite the emperor’s efforts to eradicate local banditry, Leombrotus noticed a contingent of Roman soldiers escorting a caravan. The merchants took no risks, considering the valuable content they were carrying.

Berenice was a sight to behold. Built by the Ptolemaic rulers as a transit hub for African forest elephants hunted in its hinterland, Berenice became one of the biggest forts in the eastern desert and a major Red Sea port. Moreover, harbor facilities, recently restored by Emperor Tiberius, made Berenice more attractive than its northern counterpart. Thus, it is unsurprising that at the time of Leombrotus’ arrival, dozens of ships of all sizes filled the harbor. According to Strabo, our best source on Indian Ocean trade, more than 120 merchant vessels sailed to India every year.

Walking towards his ship, Leombrotus could see numerous buildings and storehouses owned by shipping companies belonging to wealthy families. The agents who handled the family interests in overseas trade talked to dock workers, oversaw the loading or unloading of goods, and negotiated with the authorities or caravan leaders. There was also a usual import duty of twenty-five percent, taken by the state. Despite the high taxes, Indian Ocean trade was a lucrative business. But it required significant financial resources, which only the most affluent merchants could afford. Most of those entrepreneurs came from Roman Egypt, with only a few originating in Italy or the rest of the eastern Mediterranean.

Along the African Coast

Leombrotus’ ship — Hierapolis — belonged to one such Roman Egyptian merchant. It was a large vessel, big enough to brave the waters of the Indian Ocean and powerful monsoon winds. The ancient records and Mediterranean shipwrecks, such as one found near Madrague de Giens, suggest that Indian Ocean trade ships could have been as long as 60 meters (196 feet) and capable of carrying up to 1000 tons of cargo. The vessels had stout hulls and caught the wind with a huge square sail on a stubby main mast. However, sailing was slow and only effective with a following wind. Thus, it was vital to depart Berenice on time. Leaving Egypt in July would allow the captain to take advantage of the powerful Southwest monsoon wind that would then carry Hierapolis over the Indian Ocean, all the way to Malabar Coast and its destination, Muziris.

Observing the African coastline passing by, Leombrotus noticed an armed archer patrolling Hierapolis’ deck. The Romans maintained a small navy in the Red Sea, but their patrols operated only in upper stretches of the gulf. A century later, Emperor Trajan would expand the navy and make the Red Sea safe for sailing. But in Leombrotus’ time, piracy was still an issue. Thus, vessels had to carry teams of mercenary archers aboard. The Spartan explorer could also see other ships on the horizon. The merchants had to adhere to a tight schedule dictated by the rhythms of the Monsoon winds and thus sailed in groups to make most of the limited time window.

Sailing close to the African coast allowed for easier navigation and a safer voyage, as the ships could use numerous bays and coves in case of a sudden storm. In addition, several ports, controlled by local chiefs, offered a safe harbor and an opportunity to engage in commerce. Hierapolis was already laden with cargo, and the captain was uninterested in the Ethiopian slaves provided by the local trader. South Arabia, however, was a different case. Before the long run over the open water, Hierapolis docked at Kane. Nowadays, a village on Yemen’s coast, Kane was a significant exporter of frankincense in the Roman period. After loading the valuable cargo, and 40 days after leaving Berenice, Hierapolis sailed into the Indian Ocean.

The last stage of Leombrotus’ journey involved a two-week crossing over the open ocean while the monsoon winds and heavy rain pounded the ship. Luckily, this time Hierapolis passed unscathed. Even with the most favorable winds, sailing over the Indian Ocean was a risky business, and the ships carried a complement of carpenters to repair the damage. Finally, a hundred days after leaving Alexandria, Leombrotus saw the lights of the Malabar Coast on the horizon. Hierapolis had reached India!

Once situated on the estuary of the Periyar River, Muziris now lies hidden in the undergrowth of its former lagoons. But during Roman times, Muziris was one of the principal centers of Indian Ocean trade (the other two centers being Barbarikon in the north and Arikamedu in the south). Disembarking the ship, Leombrotus would be amazed by the cosmopolitan setting of the town, which housed the local population, the merchants arriving from other parts of India, and even those from far-flung China, relatively unknown to the Romans.

As a place of paramount importance for the Empire, Muziris had a small Roman community. While most merchants who sailed to India would depart as soon as their business was over, some more powerful and wealthy families had their agents in the town. These individuals would have been able to engage with local contacts to gather helpful information and assemble goods in advance. They also served as middlemen between the Romans and local merchants.

Written accounts and coin hoards comprising over 6000 silver denarii and gold aurei suggest the large extent of trade carried out in Muziris. That is unsurprising, as the goods that Muziris’ markets offered to Rome were incomparable with the commodities brought in. Besides black pepper, which became an integral part of Roman cuisine, Indian Ocean trade ships returned to Egypt loaded with nard, malabathron, tortoise shell, pearls, ivory, gems, diamonds, sapphires, and fine cotton garments.

Another precious commodity shipped from Muziris was Chinese silk, highly sought among the Roman elites, including the imperial family. All of the goods could be carried easily and in great quantities. Thus, ships used in the Indian Ocean trade could accommodate cargoes of enormous value. Even after the Roman government creamed off its twenty-five percent import duty, the merchants would earn huge profits, enough to buy entire estates in the imperial heartland and invest the rest.

In December, three months after its arrival to Muziris, the Hierapolis sailed back, catching the benign northeastern monsoon. The ship was loaded to the brim with exotic commodities, which would fill the markets in all corners of the Roman Empire. It also carried an Indian embassy for an audience with Emperor Caligula. A year after departing Egypt, Hierapolis moored in Berenice, only for its crew to discover that the emperor was killed by his bodyguards, the Praetorians.

Leombrotus, however, remained in India to study with Hindu Brahmins, oblivious to the regime change in his distant homeland. News in the ancient world traveled slowly, and it would take another year for our intrepid Spartan explorer to discover that another emperor now ruled in Rome. Indian Ocean trade, however, was not affected by the power shifts. It continued as usual, with ships sailing to-and-fro to India until the trade route broke down in the seventh century.