From tattooing the back of drug-addicted sex workers to paying people to sit in a box for several hours, Santiago Sierra’s works are known for causing controversies. 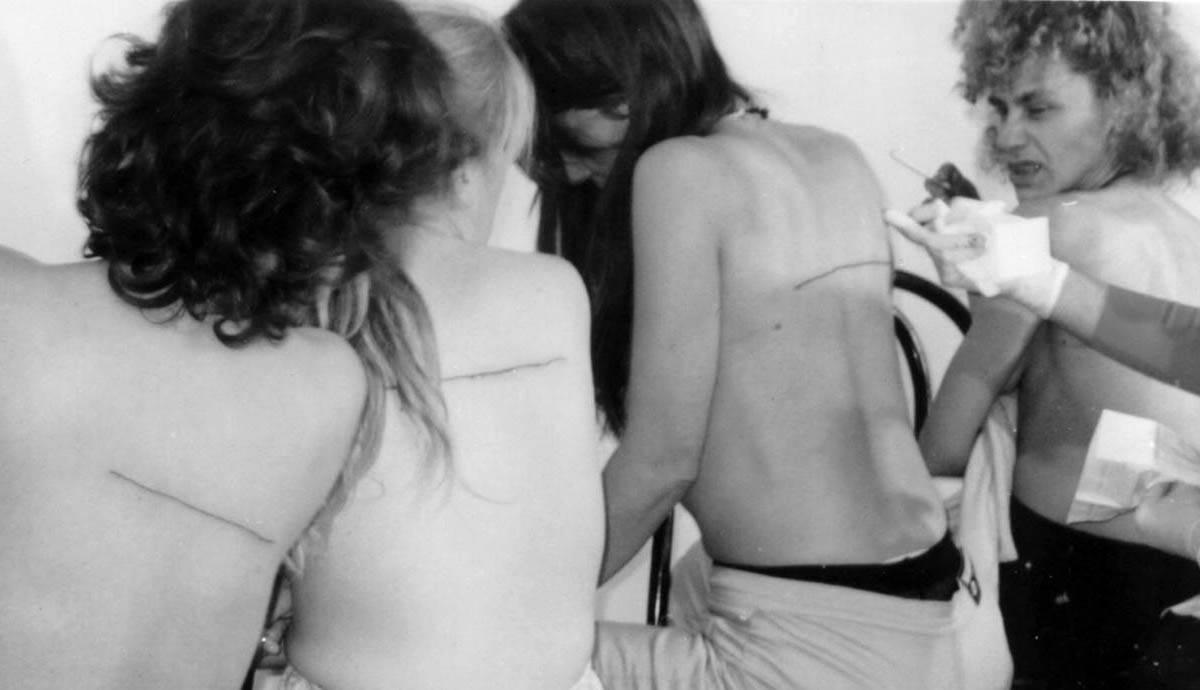 Santiago Sierra’s art often includes marginalized groups of people such as immigrants, sex workers, asylum seekers, and people with low incomes. The artist usually hires them to do menial and uncomfortable tasks like sitting in a box during an exhibition for several hours, getting their naturally dark hair dyed blond, or having a line tattooed on their back for payment. Santiago Sierra’s work commonly references topics like social inequality, capitalism, morality, and labor.

Who Is Santiago Sierra?

The Spanish artist Santiago Sierra was born in 1966 in Madrid. He studied in Madrid, Hamburg, and Mexico City, where he also lived for fourteen years. Sierra said that Mexico had the most important influence on his life. The artist added: “In Mexico, you become part of the higher levels of society because you are European. These kinds of issues were very important to understand how tough the working conditions are in some parts of the world.”

His body of work consists of a mixture of performance art, installation art, and sculpture which are often documented via videos and photos. His works are characterized by a minimalist aesthetic. Sierra explained the focus on minimalism in his art by saying that it helps him to avoid distraction and that it is cheaper, and easier to transport “if it’s cubic.” The artist and his work have a reputation for being controversial due to his art’s morally questionable nature.

Santiago Sierra recently made headlines with his plans to soak the British flag in the blood of colonized peoples. The work was canceled because of a social media backlash led by Indigenous Australian artists. One of his earliest similarly controversial works consisted of asylum seekers sitting in boxes for four hours per day. They were not allowed to be paid for their work according to the law in Germany, which was the country where they were asking for asylum. The piece from the year 2000 is hence called Six People Who Are not Allowed to Be Paid for Sitting in Cardboard Boxes. Let’s take a look at the central themes of the performance and installation art movements to better understand Santiago Sierra and his work!

Even though there are earlier examples of performance art, the term arose during the 1970s to generally describe a temporary artistic live act. This included things like Happenings, body art, events, and guerilla theater. A few of the most important artists of the movement are Marina Abramovic, Yoko Ono, Carolee Schneeman, Vito Acconci, Joseph Beuys, and Chris Burden.

The themes of performance art pieces are often connected to social critique, feminism, and challenging traditional media of visual art such as sculpture and painting. The revolutionary and political spirit of the movement was represented in many, often highly controversial, performances which pushed the limits of art as well as of the artist and audience. Marina Abramovic’s work Rhythm O, for example, consisted of the artist inviting the audience to use 72 provided objects on her as desired. The objects included a rose, razor blades, and a scalpel. While the beginning of the performance was relatively harmless, the audience became more aggressive later on by subjecting Abramovic to sexual assault and cutting her skin near her throat in order to drink her blood. The performance raised questions of how far people would go when given the chance to do whatever they want to a person.

Installation art consists of large-scale and three-dimensional constructions that are sometimes specifically designed to occupy a concrete space such as a gallery. When viewing an installation art piece, the viewer is supposed to be physically present in the space to fully experience the effect of the work. Due to their size and innovative design, these site-specific installations frequently evoke strong emotions or moods. Important artists of the movement include Yayoi Kusama, Cornelia Parker, Judy Chicago, Damien Hirst, and Marcel Broodthaers. Cornelia Parker’s piece Cold Dark Matter: An Exploded View is one example of a large-scale installation artwork. The British Army blew up an old shed for the artist and Parker reassembled the pieces into a large installation that represents the exact moment when the shed exploded.

In many of Santiago Sierra’s works, people get paid for completing ordinary or even unpleasant tasks. The exchange of money for doing things like standing in front of a wall for one hour, holding up a block-like structure, or sitting inside of a cardboard box for several hours exemplifies the relationship between physical labor, low pay, and capitalism. Workers, such as the staff at a museum, are almost invisible to many people and often go unnoticed. In Sierra’s art the workers, their status in society, and their physical labor become visible. The boxes in which Sierra’s workers were hidden even exemplify their invisibility in everyday life.

While Sierra is often criticized for the treatment of the workers and displaying them while completing these tasks, many people are forced to work under uncomfortable or even harmful conditions on a daily basis in order to survive. The difference between those cases and Sierra’s art is that people have to confront themselves with these uncomfortable conditions.

In an interview, Santiago Sierra said: “Well, I have been called an exploiter. At the Kunstwerke in Berlin, they criticized me because I had people sitting for four hours a day, but they didn’t realize that a little further up the hallway the guard spends eight hours a day on his feet. […] Many of the people who make those criticisms have never worked in their lives; if they think it’s a horror to sit hidden in a cardboard box for four hours, they don’t know what work is.“

Criticizing art institutions is another important aspect of Santiago Sierra’s work. In one of his projects, he covered the word España on the façade of the Spanish Pavilion with black plastic during the Biennale of 2003 in Venice. He also sealed the pavilion’s entrance with cinderblocks and people had to go around the building and show uniformed guards their Spanish passports in order to enter the building. Those who managed to get into the pavilion found nothing but remains of the previous exhibition. According to Sierra, the empty pavilion represented the political construction of nations since “countries don’t exist.”

Sierra commented on this project and criticized the exclusivity of the Biennale in an interview: “In the context of the Biennial we are all playing at national pride, and I wanted to reveal that as the principal system of every pavilion. I had fun covering the word “España” on the facade of the building […] — because you can’t forget that the countries that participate in the Biennale are the most powerful ones in the world. I mean, there’s no pavilion for Ethiopia.“

Santiago Sierra’s work 160 cm Line Tattooed on 4 People is a video of an act that took place in Spain in the year 2000. The piece consists of four sex workers addicted to heroin who were paid for their consent to have a line tattooed on their back. The payment was equal to one shot of heroin, which was around 12,000 pesetas or about 67 US dollars. The artist clarified in a text accompanying the video that the women usually charge 2,000 or 3,000 pesetas or about 15 to 17 dollars for fellatio. The work is often viewed as immoral and as an exploitation of the participating women. Sierra, however, argues that the tattoo is not the problem. The problem is the existence of social conditions that allow for this work to happen.

Works like 160 cm Line Tattooed on 4 People by Sierra focus on the tension created between the relationship of the privileged and wealthy viewer who engages with and potentially buys art and the drug-addicted sex workers who do not have access to proper medical and financial support. Sierra highlights the economic, political, and social circumstances that facilitate these harmful aspects of labor.

Another work called Group of persons facing a wall which, among other places, took place at the Tate Modern museum shows a line of women standing in front of a wall. The women who participated in the performance were homeless and received a payment covering the expenses of staying in a hostel for one night. They were instructed to face the wall and not move for one hour. The position that reminds of a common punishment was intentionally chosen by Sierra.

While the performance might be uncomfortable to watch for some viewers, the work does not add to the stigmatization of homeless people. It serves the purpose of making the viewer painfully aware of the negative status and treatment this group of people often has to endure. By lining the women up in a museum, the viewer cannot ignore them as many would do on the street, but they have no choice other than to confront themselves with the issue.

Santiago Sierra’s work brings attention to communities that are overlooked, ignored, ostracized, and exploited. People who are homeless, unemployed, sex workers, drug addicts, illegal immigrants, and endure physical labor become visible in his art. For Sierra equality is one of society’s broken promises which is why his art addresses themes like continuing inequality, capitalism, and the less visible groups of society.