HomeArtistsSantiago Sierra: 10 of His Most Important Artworks

Santiago Sierra: 10 of His Most Important Artworks 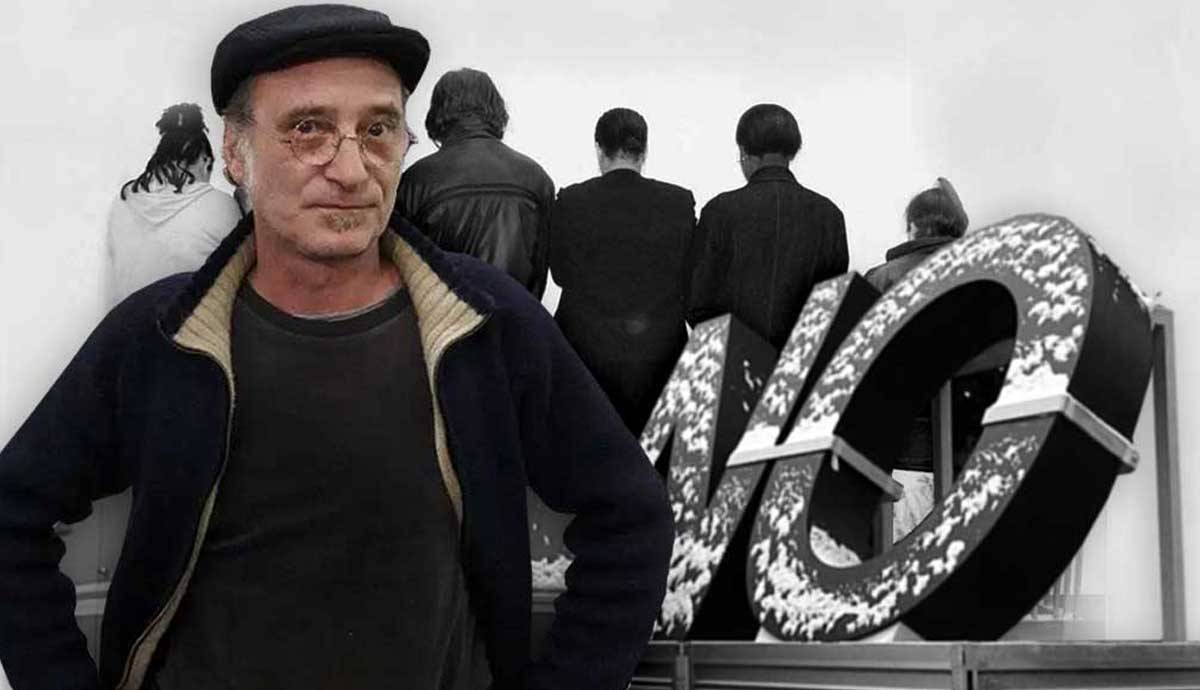 Santiago Sierra’s art often causes controversy. Sierra’s unconventional projects such as his empty Spanish Pavilion for the Venice Biennale, spraying immigrants with foam or paying homeless women to face a wall usually attract public attention. In many cases, the Spanish artist’s works represent a critical response to social, economic, and political conditions and the visibility of labor. Read on to learn more about 10 of his most important artworks.

For his work 160cm Line Tattooed on Four People, Santiago Sierra paid four sex workers who were addicted to heroin to have a straight line tattooed on their backs. He filmed the act resulting in a 63-minute-long video that shows the process in black and white. The women were paid the right amount of money to be able to buy a shot of heroin during that time, which was about 12,000 pesetas or around 67 dollars. According to a text accompanying the video, the participating sex workers usually charge 2,000 or 3,000 pesetas, between 15 and 17 dollars, for fellatio. This means they would have to perform the sexual act around four times for the same amount of money that Sierra paid them.

To create the 160cm Line Tattooed on Four People Sierra went to locations that were frequented by sex workers. He asked them how much they usually charge and made an offer to them. When confronted with the aspect of exploitation in his work, Sierra argues that it is not his work that is problematic but the social circumstances that make it so easy to create a work such as this one.

2. Workers Who Cannot Be paid, Remunerated to Remain Inside Cardboard Boxes, 2000

The long title of the piece Workers Who Cannot Be Paid, Remunerated to Remain Inside Cardboard Boxes fittingly describes its content. In the year 2000, Santiago Sierra got six people who were seeking asylum to sit inside a cardboard box for four hours every day over a period of six weeks. Sierra did similar projects in Guatemala City and New York, but in these cases, he was able to pay them minimum wage. For the work in 2000 that took place in Berlin, Sierra was prohibited from paying asylum seekers by German law. Despite the fact that Sierra secretly paid them anyway, the work makes the precarious living conditions of asylum seekers visible. While the viewers walked around the exhibition, they could not see the refugees behind the boxes but only notice the oppressive atmosphere that was created by the noises of coughing or movement coming from the inside of the cardboard boxes.

During the Venice Biennale in 2001, Santiago Sierra asked local illegal street vendors to have their hair dyed blond for 120,000 lire, which equaled around $60. The only condition was that the participant’s hair was naturally dark. Many of the street vendors were immigrants from countries such as Senegal, Bangladesh, China, or Southern Italy who met Sierra’s requirements.

The act took place in a warehouse in Venice with many of the participants getting their hair dyed at the same time. Sierra planned for 200 people to take part in this work, but the chaotic and large flow of people leaving and entering the place made it difficult to count the participants. They consequently had to close the entrance which resulted in only 133 people having their hair dyed blond during the project. The dying of the naturally dark hair of immigrants during one of the biggest contemporary art exhibitions addresses questions regarding racism, wealth distribution, and the price of labor.

Santiago Sierra’s version of Group of people facing a wall that was exhibited at Tate Modern in 2008 shows a group of women standing in front of a wall with their back to the audience. The women who participated in this piece were homeless and were paid the amount of money it would cost to stay in a hostel for one night only. They had to face the wall and stand there for one hour without moving.

The way they were facing the wall reminds us of a common punishment that is often used to discipline children. Santiago Sierra said that this was one of his most important pieces done around the concept of work and punishment. Places like museums, art galleries, and the art market are popular among the wealthy and the upper-class people. These are also places where most of the visitors do not want to be directly confronted with social inequality. Sierra challenges the invisibility and disregard for those living in poverty and under precarious conditions.

5. The Spanish Pavilion of the Venice Biennale, 2003

In one of Santiago Sierra’s projects, the artist used black plastic to cover the word España on the façade of the Spanish Pavilion of the Venice Biennale. The entrance of the pavilion was blocked, and people had to go around the building if they wanted to see the exhibition. When they reached the entrance at the back the visitors could only access the building with a Spanish passport that they had to show to the guards in uniform. The few people who met the requirements were able to see nothing but the remains of last year’s exhibition. In an interview, Sierra explained the empty pavilion as a representation of Spain as a country by saying: “A nation is actually nothing; countries don’t exist. When astronauts went into space they did not see a line between France and Spain.”

6. Polyurethane Sprayed on the Backs of Ten Workers, 2004

Santiago Sierra’s work Polyurethane Sprayed on the Backs of Ten Workers consists of 10 immigrants from Iraq who were paid to be sprayed with Polyurethane foam. According to Sierra’s website, they were protected with chemical insulating suits and plastic sheets. After they were sprayed, the foam slowly turned into free-standing forms. The forms as well as everything else that was used during the action remained at the exhibition, except for the Iraqi immigrants.

Santiago Sierra said that he used the foam to create tension between the seemingly aggressive guns used to spray the foam emitting toxic fumes and the protective quality of the Polyurethane. He called it a dual way of administering power: with love and hate. The artist also wanted to remind the viewers of significant images of workers in protective suits cleaning up the Prestige oil spill that took place in Spain in 2002 and the horrifying pictures of Abu Ghraib.

The installation titled House in Mud took place in the year 2005 in Hannover, Germany. The artist filled the ground floor of the Kestner Gesellschaft with a mixture of mud and peat that was distributed over the floor and walls. Sierra’s House in Mud is inspired by the artificially created Lake Masch in the city center of Hannover. The creation of the lake was commissioned by the government in the 1930s as part of an unemployment relief program. The installation explores the worth of workers and their labor. The visitors were provided with rubber boots or could walk through the room with bare feet. The visible footprints of the visitors in the mud became part of the artwork.

The work with the long title 7 Forms Measuring 600 × 60 × 60cm Constructed to Be Held Horizontal to a Wall consists of several people who were paid to hold up blocks with their shoulders to a wall. Sierra recruited the workers through an employment agency and paid them minimum wage to hold up the structures for eight hours. The work is characteristic of Sierra’s art by commenting on labor and the stark contrast between people watching and people working. The piece makes the labor of those doing menial tasks in the art world visible and separates the exhibition space into those who work and those who watch.

Santiago Sierra’s series War Veterans Facing the Corner started with veterans facing a corner in different exhibition spaces. They were paid to stand in the corner and not speak or answer questions from anyone. Each veteran participating in the performance was photographed.

The work challenges the depiction of soldiers as evil or heroes and interprets their work as influenced by the social and economic circumstances that produce illegal work, sex work, and drug addiction. Sierra pays the veterans for their participation in his work as they were paid by an industry that often facilitates violence.

The No, Global Tour consists of two sculptures spelling the word NO. The sculptures toured through different countries and Sierra made a movie of the monumental structure traveling around the world. The sculptures traveled through cities such as Berlin, Milano, London, Pittsburgh, Toronto, New York, Miami, Madrid, and Mexico City. According to the tour’s press release the work carries out a synthesis between the sculpture that stresses the relation to specific environments, and the letter, which is able to address particular situations. Due to the constant change of location, the meaning of the work and the word “NO” change as well.