Along with Goya's Neoclassicism and Sorolla's Luminism, many Spanish painters and other forgotten masters raised 19th-century art to its highest pinnacle. 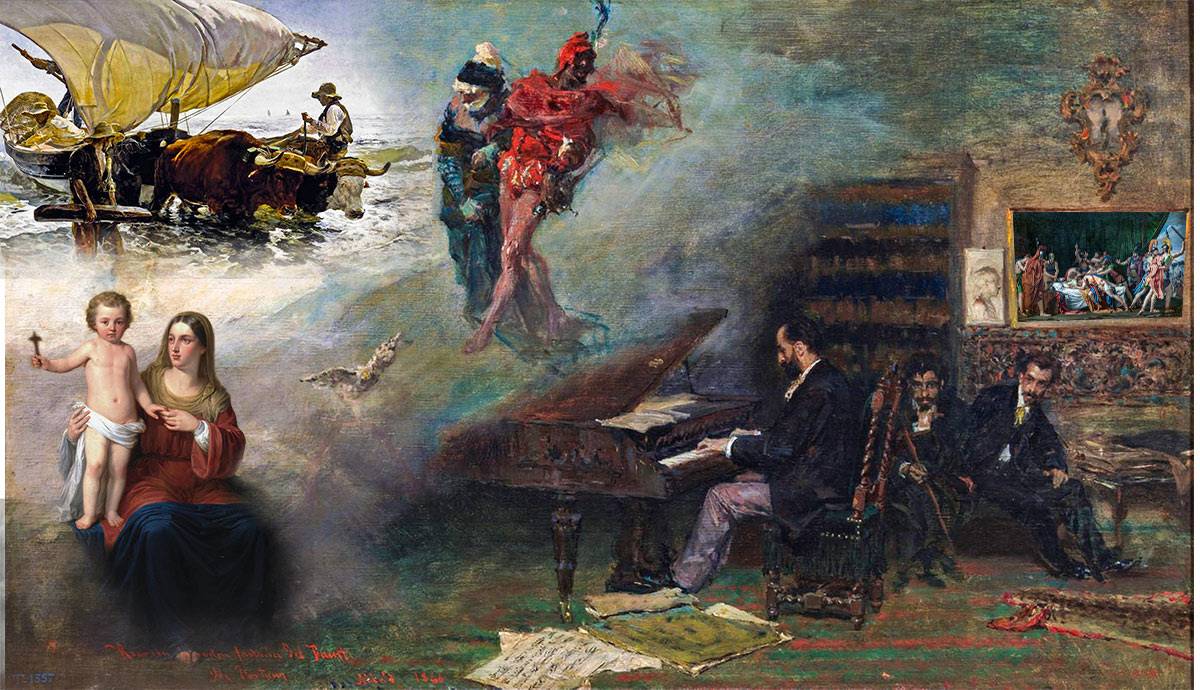 One of the prominent genres of the 19th century was history painting. Many Spanish artists adopted this style and it was mainly cultivated in Art Academies. The painters used to compete for pensions by submitting historical subjects as academic exercises to win prizes. The Spanish government, as the biggest patron of history painting, thereby promoted a particular representation of past figures and events. The classical world and particularly the Roman Republic were the most common topics of many artworks. Heroes, political and military leaders, anonymous or individualized, were often depicted by artists in order to mirror the national identity. Below are 10 influential Spanish painters that marked 19th-century art.

Fransico de Goya was considered the best Spanish painter of Neoclassicism and Romanticism. He commanded the transition in art from the 18th to the 19th century and occupied a unique position within the history of Western art. Born in Fuendetodos, Goya was the son of a gilder. In 1779, Goya was named a painter to the royal court of Spain, where he worked for four monarchies. Although he spent his entire life painting commissioned works for the royal court and Spanish aristocracy, he was also a prolific artist outside of the court. He enjoyed painting happy scenes about light-hearted daily events.

After being diagnosed in 1793 with a severe illness that left him completely deaf, his work became progressively darker and pessimistic. His series of black paintings and etchings contain images of violence, despair, mental illness, and evil. Goya used his art to critique the Spanish government and express his dissatisfaction with Spanish king Ferdinard. Eventually, he isolated himself in a small country home. Between 1819 and 1823 he painted some of his darkest work. Many of his 19th-century contemporaries were influenced by his unique style and technique. The inclusion of Goya allows for a better understanding of painting of the first third of 19th-century art.

José de Madrazo was one of the most important and cherished Spanish painters. He lived at the end of the 18th century and the beginning of the 19th century. In Madrid, Madrazo was under the protection of King Charles IV of Spain. From there he went to Paris to master his pictorial technique under the Neoclassical master, Jacques Louis David. His apprenticeship inspired him to bring the new French Neoclassical style into Spanish art and culture.

In the 19th century, throughout Europe and specifically Spain, there was great political turmoil with serious disputes between nations. This representative painting of Madrazo evokes the courage of the people of the Lusitanian tribes of Hispania Ulterior against the Roman empire. Therefore, the struggle of Spain against Napoleon.

A great artist among the notable Spanish painters of 19th-century art history, Antonio Gisbert bloomed in the period of Spanish Eclecticism. He was of humble origin but managed to get trained at the Royal Academy of Fine Arts of San Fernando. Between 1855 and 1858, he retired to Rome, where he sent his work as a pensioner to the Academy. In 1968, he became the first director of the Prado Museum in Madrid.

One of his greatest paintings was the Execution of Torrijos and his Companions on the Beach at Málaga. This painting was the only one commissioned by the State for the Prado museum. The theme of Torrijos wasn’t a popular subject for other Spanish painters until 1885. That year, the Prime Minister of Spain commissioned Gisbert to paint this painting. The intention was to commemorate the action of the squad of general Torrijos and his closest unconditional followers, who had fought in the Spanish War of independence.

Pradilla was a brilliant Spanish painter from Aragon, the same town where Francisco Goya was raised. From a young age, he showed a talent for drawing and he aspired to become a sign painter. He attended the San Luis School of Fine Arts, then moved to the Royal Academy of Fine Arts of San Fernando in Madrid. In 1877, Pradilla created what was later considered one of the most famous paintings of 19th-century art.

He submitted this history painting of Doña Juana “la Loca” – or Joanna the Mad in 1878 at the National Exhibition of the Spanish Salon, where he won the Medal of Honour. Inspired by a historic figure, the Queen Juana of Castile, the Spanish painter wanted to depict her through a romantic interpretation, given that she embodies love, honor, death, and madness. In Pradilla’s painting, Juana, stripped of power, contemplates while standing above the coffin with her dead husband in it.

His historic muse, Juana la Loca, became a figure that inspired the artist throughout his life.  Although history paintings are generally canvases of enormous dimensions, Pradilla had the exquisite ability to transform them into smaller cabinet paintings. These were intended to decorate the houses of the bourgeois and wealthy families of the early 20th century who were his patrons.

In its almost 37 years of existence and less than 17 years of work, Eduardo Rosales marked the history of 19th-century art in Spain. An orphan child from Madrid, Rosales managed to study in the Academy of Fine Arts of San Fernando. After receiving his artist pension, he went to Italy, where he completed his training. He wasn’t concerned with the pictorial genre of his time. Thus, he significantly reformed 19th-century art in Spain, moving away from purism towards realism. He devoted himself to the historical theme during his pensioner stay in Rome.

The painting that earned Rosales his entry and a first-class medal in the universal exhibition in Paris in 1864, was a testament to Isabella the Catholic. The reason why he chose this historic theme was that for him a dying Catholic Queen was a more transcendent subject than the others he had considered. In Rosale’s painting of Isabella, as well as in Pradilla’s painting, Doña Juana, the presence of death points towards a model of national rebirth, shaping Spain’s present and future.

Born in Catalonia, Fortuny was one of the most renowned printmakers and Spanish painters that created works in the Orientalist tradition of the 19th century. Despite his early death at the age of 35, his traditional style was defined by painstaking drawings and brilliant colors. In 1857, he won a scholarship to Rome, where he studied at the Accademia Gigi. The different techniques he mastered included: oil painting, watercolors, and etchings that were influenced by the work of Goya, Rembrandt, and José de Ribera. Mariano Fortuny not only captured the point of view of ancient great masters but also incorporate it into his artworks.

The painting Fantasy on Faust conveys the artist’s exceptional love for music, even a year before he was married to Cecilia de Madrazo, granddaughter of José de Madrazo, and a skilled pianist. It’s also an homage to Joan Baptista Pujol, the most brilliant composer and pianist of Fortuny’s day.

Known as the great Spanish Master of Light, Sorolla marked this spontaneous and luminous transition from the 19th century to the 20th century. Born in 1863 in Valencia, he was raised by his uncle because both of his parents died in the 1865 cholera epidemic. His uncle saw his talent and encouraged him to take drawing classes at a local art school. He was also a student of another famous Spanish painter, Francisco Pradilla.

Very ambitious from a young age, Sorolla wanted to be a successful artist, not only in Spain but across the world. He was gifted with extraordinary technique. He captured light well, whether he painted scenes of Spanish life or landscapes. Even though he lived during the Impressionist era, his style had little in common with the French Impressionists. His style became known as light Impressionism or new Impressionism.

In 1894, this large-scale four meters wide painting was exhibited at the Paris Salon. Sorolla won a second class medal which was a remarkable achievement for a foreign artist. His painting was also bought by the French state. He usually depicted scenes from daily life from Mediterranean landscapes, like in this artwork. Given that Sorolla was extremely aware of photography, it’s understandable why he depicted light so accurately in this painting.

Born in Valencia in 1772, the Spanish painter Vincente López Portaña began his artistic studies at the Academy of San Carlos. Soon, he received a scholarship to study for three years in Madrid.  He returned to his native city in 1792, while in 1801, he became a director of the Academy where he was trained in his youth. Lopez served before the reign of Ferdinand VII of Spain as the honorary court painter to King Charles IV and he was one of the most important artists of the Spanish Enlightenment period. He is best known for producing portraits of royals, statesmen, academics, and even other painters. Apart from that, he painted miniatures and frescos showing religious, allegorical, and mythological scenes.

One of the greatest realist landscape Spanish painters from the 19th century was Carlos de Haes. Born in Belgium, de Haes moved to Spain with his parents to Málaga. There he studied under the protection of Luis de la Cruz y Ríos. Later, he went back to Belgium and continued his studies, getting in touch with contemporary Realist trends. Soon, he began to exhibit numerous landscapes depicting the Spanish countryside. In 1860, he became a teacher of landscape painting at the Real Academia de San Fernando in Madrid, training a generation of Spanish painters. Carlos de Haes was known as the grandmaster of landscape painting​, with an emphasis on three aspects: luminosity, proportion, and direct observation from nature.

Antonio María Esquivel y Suárez de Urbina can be ranked among the best Sevillian and Spanish painters of the 19th century. He studied painting at the Academy of Fine Arts in Seville, where he practiced the pictorial techniques of his teacher Bartolome Esteban Murillo. Later, he moved to Madrid to continue his studies and became a merit scholar. In 1839, after being diagnosed with a pink eye illness, he committed suicide but for his good luck without success. After several years, he became a court painter and, in 1847, a professor at the San Fernando Academy in Madrid. During his career, he specialized in religious paintings and portraits, reflecting not only on his formal and literary sources but also on his connection with the work of Murillo.