When the Black Death struck Europe, society didn’t know how to treat it. Some remedies had their basis in herbal medicine, but others were nonsense and made patients worse. 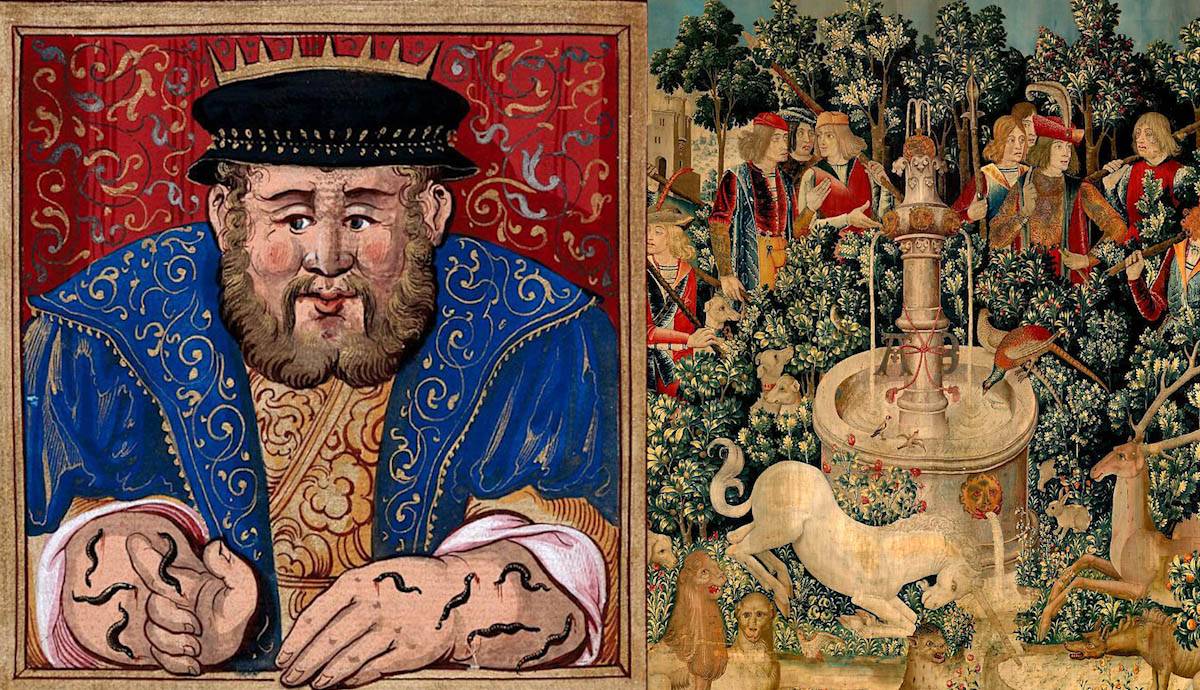 The Black Death devastated Europe during the Medieval Period, killing an estimated one-third of the population. Today, we know that the Black Death is caused by a bacteria called Yersinia pestis. During the Black Death, this bacteria was spread by the biting fleas and rats that were a common fixture in medieval living conditions. The medical profession had no idea what caused the Black Death, let alone how to cure it. Many cures had their roots in herbal medicine, which was the mainstay of contemporary physicians and apothecaries. Other so-called “cures” were quackery, or fuelled by religious fear-mongering.

Medicine and the Black Death in the Medieval Period

The Greek physician Galen (129-201 CE) popularised a theory about the human body, which stated that it was made up of four fluids called “humors”: black bile, yellow bile, blood, and phlegm. If there was an imbalance of any of these humors, then illness would follow. Medieval medicine adhered to Galen’s theory, and food was often used as medicine to correct an imbalance in the humors of a sick patient.

When the Black Death struck, medieval physicians turned to this theory in an effort to combat the disease, as well as trying new treatments. Along with tried-and-true treatments, medieval doctors were desperate enough to try anything to stop the pandemic, the likes of which they had not seen before.

For anyone unfortunate enough to contract the Black Death, their days were most likely numbered. It took an average of three days from the first signs of infection, to death. People were so horrified by this lack of time that they would sew themselves into their own funeral shrouds (besides, in some cases there was no one else left alive to do it).

However, catching the plague was not an automatic death sentence. Some people caught it and survived, whereas some people never caught it at all. Modern science believes that these people had a natural immunity to the pathogen that caused the Black Death.

Here are ten medieval “cures” that were used to treat the Black Death. While none of them cured the plague, the science behind some of them was quite sound. Other methods were not only ineffective, but they caused the patient even greater suffering.

1. Vinegar and the Black Death

The Vinegar Merchant, by Abraham Bosse, mid-to-late 17th century, via the Metropolitan Museum

Known as Four Thieves Vinegar, this Black Death cure from the Medieval Period mixed vinegar with garlic, herbs, and spices. Legend has it that four thieves who ransacked the homes of dead victims protected themselves with this concoction whilst they looted, and they never succumbed to the disease.

Vinegar was used as more of a preventative than as a cure for the Black Death; the advice at the time was for the healthy to rub it on their bodies before dealing with the sick and the dead. There was some science behind this plague treatment; vinegar has been known as a disinfectant since ancient Greek times. Added to this were the antimicrobial and insect-repelling properties of the herbs and spices.

2. Curing the Black Death with Onions

The humble onion was one of the home remedies that desperate doctors and patients alike tried to use to cure the plague, by rubbing chopped raw onion on the buboes (the large pus-filled boils that turned black, hence the name, the Black Death). Not only would the onion draw out toxins, it was thought that onion fumes could combat miasma. Miasma was what medieval folk called poisonous, noxious fumes. The Europeans of the Medieval Period believed that breathing in miasma led to the plague.

While they may not have been entirely correct about miasma, they still understood that respiration played a part in the spread of the Black Death. There were two types of plague — bubonic plague, which caused buboes, and pneumonic plague, which was spread by coughing and sneezing. Pope Clement VI supposedly advised his people to only shake hands with a person if their breath was sweet. More on Pope Clement VI later.

Going back to Galen’s theory of the four humors, blood-letting was a common medical procedure in the Medieval Period. The idea was to allow some of the excess humors to drain out of the body. It was used as a cure-all for a variety of conditions, including epilepsy.

Blood-letting was the first port of call for physicians during the Black Death. This was generally done using a blade (called a fleam), or by applying leeches (more on those later). The blood would be drained into a bowl directly from the patient’s vein, usually one found in the forearm or the neck.

Sadly for victims of the Black Death, blood-letting certainly had no effect, and could not destroy the bacteria within. All it achieved was to weaken the patient, and potentially spread more infection and disease via unsterilized equipment. Germ theory had been proposed by the Persian physician Ibn Sina (a.k.a. Avicenna) as far back as 1025, but in the Middle Ages in Europe, this theory was rejected in favor of Galen’s ideas.

4. Live Chickens and the Vicary Method

This is one of the more bizarre quack cures for the Black Death. This treatment was named the “Vicary Method” after Thomas Vicary, the doctor who promulgated it. It involved plucking feathers from a chicken’s rump, and then tying the chicken to the patient, so that the chicken’s rump was touching the patient’s buboes.

Now if that wasn’t weird enough, the thought process behind this strange and highly impractical course of treatment was that people in the Medieval Period believed that chickens breathed through their bottoms, so therefore the chicken would draw the infection out of the patient. If the patient died, then so be it. But if the poor chicken died first, then they would simply pluck and attach another.

Once again, the bacteria from the chicken would have only made matters worse for the patient, and possibly hasten death.

The Chinese had been using snakes in their traditional medicine since at least 100 CE, and snake meat was eaten to aid circulation and remove toxins from the body of a patient. During the Medieval Period, physicians would treat the plague by cutting up a snake and placing its parts on the pustules of the sufferer. In this case, it was believed that “like attracts like”, and the flesh of the evil snake would draw the evil sickness out of the victim. Snakes were also blamed for the Black Death, with religious leaders preaching that evil serpents had befouled the rivers with their pestilence.

The species of leech used by medieval doctors, hirudo medicinalis, was procured by leech collectors from the Medieval Period onward. It was used to such an extent that it was declared extinct in the British Isles at the turn of the 20th century.

Human excrement is perhaps the foulest in a long line of revolting plague treatments. Feces were mixed up with other substances into a paste consistency and smeared on buboes that had been cut open. One such recipe called for feces to be mixed with ground lily root and tree sap, and after it was applied to the open wound, it would be tightly bound with cloth — to then no doubt fester.

Let us not forget that religion pervaded every aspect of life in Europe during the Medieval Period. It is, therefore, no surprise that many considered the Black Death to be a punishment from God for the sins man committed on earth.

Groups of people known as flagellants would walk the streets stripped to the waist, whipping themselves as public penance, to purge their bodies of the sins that had brought the plague. These whips often had several tails, knotted with nails. Other people had an opposing view, thinking that the end was nigh so they may as well enjoy what time they had left on earth, and looting, drunkenness, and promiscuity became rife.

The Medieval Period is known for its mythical beasts, with the unicorn being perhaps the most intriguing. According to medieval myths, the unicorn could only be subdued and captured by a virginal maiden. One cure for the Black Death that was very expensive and therefore only available to the very wealthy was powdered unicorn horn.

This powder, known as alicorn, was mixed with water and then given to the patient to drink. It is thought that it was actually made from the tusk of the narwhal, found in the seas of northern Europe, or from rhinoceros tusk that had come to Europe from Africa.

The physicians who attended Pope Clement VI during the Black Death were really onto something. They suggested that he surround himself with flaming torches, to keep the disease at bay (as well as sick people). Today, it is understood that heat kills bacteria.

Pope Clement did not catch the plague. But he did not stay in quarantine either (again, a method of preventing the spread of disease that is known to work and therefore is still in use today). Instead, he went out and cared for the sick in his native Avignon, yet he never became sick himself.

A man ahead of his time, Pope Clement issued two papal bulls condemning the violence that had broken out against the Jews, who many Christians blamed for the Black Death. Using common sense, Pope Clement pointed out that the Jews could not be responsible given that many Jewish people had contracted the plague. He offered the Jewish people in his community sanctuary at his court and urged other members of the clergy to follow his example.

Luckily for modern-day patients, the bubonic plague can be effectively treated with something that people in the West now take for granted — antibiotics.