HomeArtThomas Nast: Learn About the Man Behind Santa Claus

Thomas Nast: Learn About the Man Behind Santa Claus

Learn how the familiar image of Santa Claus came to be, through the work of German-American illustrator Thomas Nast. 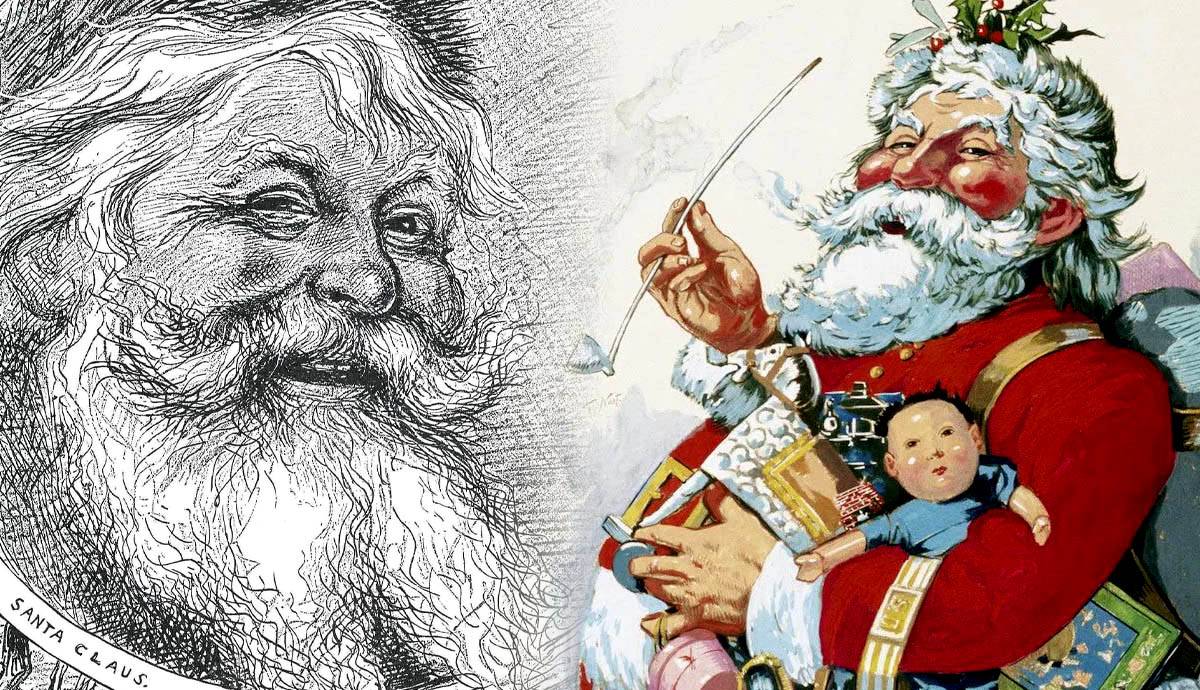 Santa Claus represents one of the Christmas season’s most iconic images. For many of us, the bearded present-giver in the red suit remains a time-honored part of the holiday season, long after we’re stopped believing he’ll have a present for us. While the idea of Santa Claus has centuries-old precedents from the Christian and pagan worlds alike, his appearance as we know it today is largely the creation of one man: German-American artist Thomas Nast. Our modern image of Santa Claus is directly indebted to Nast’s dozens of Christmas illustrations for Harper’s Weekly magazine in the 1860s-80s.

Thomas Nast (1840-1902) was born in Bavaria, Germany. He immigrated to the United States as a young child. As Nast told his first biographer, Albert Bigelow Paine, he started drawing at an early age, to the exclusion of pretty much all else. Living in New York City, he dropped out of school in favor of studying drawing with fellow German-American Theodore Kaufmann and at the National Academy of Design.

At the age of fifteen, he got his first job as a professional illustrator for Frank Leslie’s Illustrated News. Both Frank Leslie’s and Harper’s Weekly, where Nast later made his name, were illustrated weeklies. Part newspaper and part magazine, this popular new type of publication relied heavily on illustrations to clarify and enhance the written content. In the days before quick and easy photography, periodicals of all stripes employed artists to sketch current events. Nast made his living creating such images.

Thomas Nast was most actively involved in political commentary during his long career. A strong supporter of the Republican party, African-American rights, and abolitionism, Nast vigorously attacked all that he found to be corrupt and immoral in 19th-century American politics. At times, though, his satire could be downright prejudiced, particularly against the Irish and the Catholics, and he used many stereotypes common in his time.

Nast’s pen was powerful, and his cartoons could sway elections. He is frequently credited with having originated the American political cartoon. Over his career, Thomas Nast created or popularized the now-familiar images of the Democratic donkey, the Republican elephant, Uncle Sam, and Columbia (a female personification of America).

In 1862, Nast began working for Harper’s Weekly, which would publish his most celebrated and influential work. As a political cartoonist for Harper’s, the strongly abolitionist Nast created a stream of pro-Union, anti-Confederacy images throughout the American Civil War. In fact, Ulysses S. Grant later commended Nast for his powerful support of the Union, saying that Nast “did as much as any one man to preserve the Union and bring the war to an end”. After the war, Nast continued to draw often-scathing political commentary. He particularly targeted corrupt New York City politician William “Boss” Tweed, head of the powerful Tammany Hall political group.

Threats of retribution by Tweed and his cronies made Nast and his family leave New York in 1871. They settled in Morristown, New Jersey, where Nast lived for most of the rest of his life. Morristown’s Macculloch Hall Historical Museum, located across the street from Nast’s former home, still holds the world’s largest collection of his work. Nast continued, however, to contribute to Harper’s Weekly and other NYC-based publications until the 1880s. Despite his political activism, Thomas Nast is better known for something else – changing Christmas forever by creating the modern-day image of Santa Claus.

The Origins of Santa Claus

The Santa Claus we leave milk and cookies for on Christmas Eve is largely a 19th-century phenomenon. However, his roots run deeper. His clearest early ancestor was St. Nicholas, a 4th-century CE bishop from Myra, in modern-day Turkey. For this reason, Santa is still sometimes referred to as Saint Nick. The patron saint of children, among other things, St. Nicholas is also associated with generosity. He is believed to have donated doweries for three impoverished women and has brought murdered children back to life. He is usually depicted wearing ecclesiastical vestments and holding a crozier (bishop’s staff).

Many saints acquire followings, and it’s perhaps unsurprising that one known for saving children and at-risk young women would find widespread popularity. Originally, children hoped to receive presents from him on St. Nicholas’s Day, celebrated on December 6th. He has been especially popular in Holland, even after much of the country dropped Catholicism for Protestantism.

Another Santa Claus forefather is the English figure, Father Christmas, also known as Sir Christmas. Almost certainly descended from pagan traditions in the pre-Christian British Isles, there is evidence for him from at least the 15th century. Dressed in robes, with a crown of holly in his head, Father Christmas was a Dionysus-like figure who livened up some pretty wild Christmas parties. This is because pre-19th century Christmas celebrations were less about presents and family than they were about drinking, feasting, and carousing. Some of this rowdiness likely held over from the pagan Winter Solstice celebrations. Early Christmases often weren’t all that religious, to the point that Puritans briefly banned Christmas celebrations during the English civil wars of the mid-1600s.

Christmas Holidays in the 19th Century

In the 19th century, British and American culture transformed Christmas into the wholesome holiday celebrated today. Charles Dickens’ classic A Christmas Carol of 1843, for example, dates to this period. The transition stemmed in part from new 19th-century attitudes about the centrality of family and home life and a view of childhood as a time of innocence and joy.

When Dutch settlers arrived in the American colonies, they brought their love of Sinterklaas, as they call him, with them. He received particular affection from New York City, where the influence of so-called Knickerbockers, the old New York families descended from original Dutch settlers, was strong. Washington Irving promoted him in his 1809 A History of New York, a fictional work concerning New York’s Dutch history.

In 1822, the American writer Clement Clark Moore featured Santa Claus/Saint Nicholas heavily in his poem A Visit from Saint Nicholas. It’s better known today by its opening lines Twas the Night Before Christmas. Moore, Irving, and other American admirers together originated Santa’s image as a chubby, elf-like creature chauffeured by a team of reindeer pulling his sleigh on Christmas Eve.

Thomas Nast built upon this 19th-century persona when he began drawing Santa for Harper’s Weekly. He published his initial illustration of Santa Claus in his first year with the magazine. His January 3, 1863 cover depicted Santa Claus handing out presents to Union soldiers. This Santa is a rather generic bearded old man, seen from the side in a star-spangled jacket. This image pairs holiday sentiment with political messaging. Nast makes it clear that Santa supports the Union, not the Confederacy. When Santa shows the soldiers a jack-in-the-box that seems to be hanging by a noose, the puppet has the face of Confederate President Jefferson Davis. The same issue also contained another Nast illustration juxtaposing a soldier in the field with his wife and children at home. Santa Claus and his reindeer fly across the top of the image and climb down the family’s chimney on the left.

Nast made 33 Harper’s Christmas illustrations from 1863 through 1886, and almost all of them feature Santa. In those decades, a familiar Santa Claus emerges – round-bellied, ruddy-nosed, and pipe-smoking, with white hair, beard, and iconic suit. Nast, who was reportedly a rather rotund figure even in childhood, seems to have partially based Santa Claus’s physique and appearance on his own. Nast’s illustrations appeared as black-and-white wood engravings, so they make no reference to the color of Santa’s outfit. You can, however, find many versions that have been hand-colored by their owners.

Nast’s images provide the first known references of Santa Claus having a toy workshop and living at the North Pole. Over the years, he portrayed Santa making toys, separating the naughty children from the nice, stealthily delivering presents, and more. Later images even showed him interacting with children. Nast’s work gave Santa Claus a life and personality, rather than just using him as a symbol. His other Christmas illustrations showed children writing Santa letters, tracking his route, and even calling him on the telephone.

Nast’s Christmas drawings were often grander in scope and more detailed than his other work. Although they sometimes contained coded political elements, they most often focused on childhood, sentimentality, and the importance of family. His wife and children made cameo appearances, and their Morristown home often served as the backdrop.

The best-known Thomas Nast image of Santa Claus, one that continues to adorn Christmas cards and ornaments, is his 1881 Merry Old Santa Claus. It shows a Santa in an egg-shaped profile, turning towards the viewer and carrying an armful of toys. In typical Nast fashion, the selection of toys and military-style bags from which they emerge carried political meanings that would have been understandable to Nast’s original audience. According to Mccullough Hall, Thomas Nast told his family that he wanted most to be remembered for this image. If so, he certainly got his wish.

Nast’s Santa Claus lives on into the present day. More recent images, from Norman Rockwell’s Saturday Evening Post and Haddon Sundblom’s illustrations for Coca-Cola to ubiquitous shopping mall Santas and Christmas ornaments, all trace their appearances in part back to Nast’s vision. Filled to the brim with inviting warmth and vivid detail, it’s really no wonder that Thomas Nast’s Christmas illustrations have been so influential and enduring. Even more than a century after Nast’s death, they beautifully evoke the magic and joy of Christmas to many viewers.