Feast your eyes on some of the most beautiful and rare examples of Greek Antiquities that have sold on the art market over the last decade. 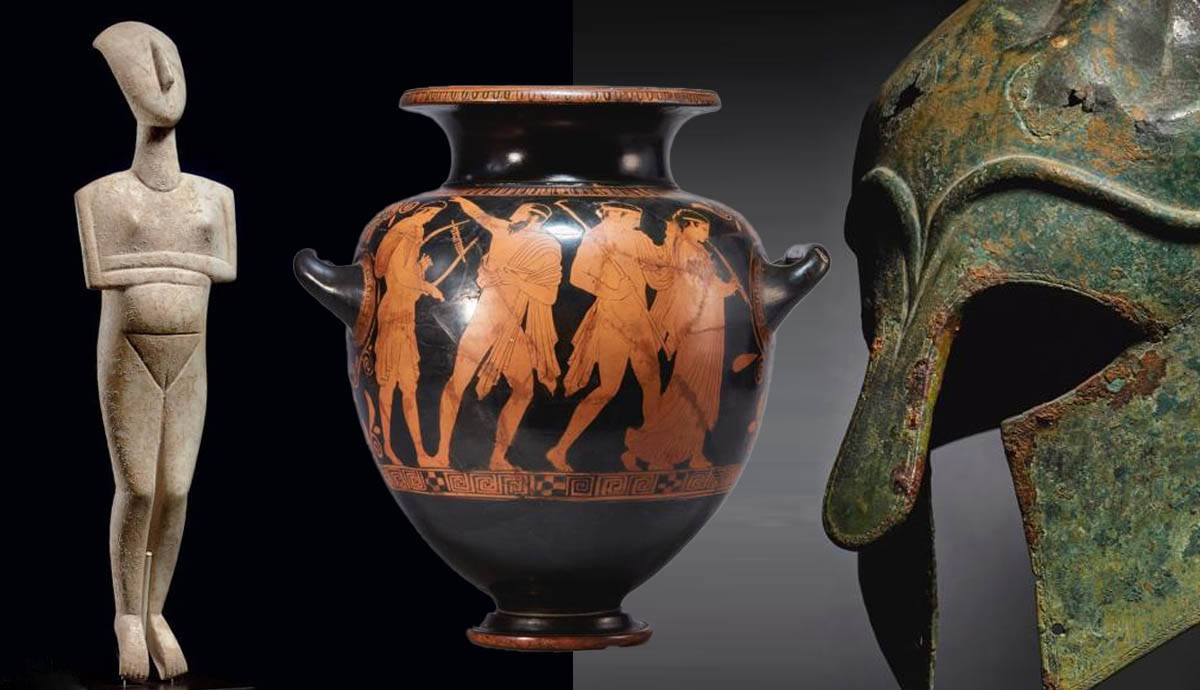 In the last decade, some of the rarest Greek Antiquities and sculptures, jewels, and armor from different eras have sold. Below, we’ll introduce you to some of the most culturally interesting gems of Greek antiquity in recent auctions.

An Attic Red-figured Stamnos, attributed to the Kleophon Painter

This is the work of the Kleophon Painter, an Athenian vase artist who was very active during the Classical period (circa 5-4th century B.C.). This specific vase is dated to 435-425 B.C. Most of his work portrayed scenes of festivities, such as symposia, or post-meal banquets.

This is no exception, portraying men playing flutes on one side. Although it shows signs of damage and restoration, it’s in good enough condition to serve as an example of one of the most well-recorded vase artists’ styles.

This 6th century B.C. helmet is in the Corinthian style, the most iconic of Greek helmets. This one is specifically made for Apulia, a part of Italy that was colonized by the Greeks.

You can distinguish it from other Greek head pieces by its wide nose plate and eyebrow details. Note the two holes on its forehead- This damage was done in battle, making this an authentic relic of the past.

Not a lot of data is available on this model besides that it was made in the 5th century B.C. Yet it’s in very good condition, with minimal repairs done, and remnants of original red pigment used to paint it.

Due to the rarity of Greek sculptural wings, the popularity of decorative antiques, and perhaps it’s conceptual resemblance to the Nike of Samothrace, an unknown buyer took this gem home for about sixteen times what it was estimated.

The cuirass, or breastplate, was an essential piece for the upper-class hoplite (Greek city-state soldiers). The bronze, “nude” style of these pieces made soldiers look like they glowed to enemies from a distance.

The above sample, despite some cracks, is very well preserved compared to many models which have oxidized. Soldiers had to buy their own body armor, and some couldn’t afford more than linen—This makes cuirasses stand out as one of the rarer artifacts of Greek armor.

Dated to 650-620 B.C., this helmet is the highest quality of its kind. It’s one of two Cretan helmets with the topping hook, but unlike its counterpart, this one contains mythological illustrations.

The drawings (pictured right above) reveal the details of what they would have looked like before damage. Part of it portrays Perseus presenting Medusa’s decapitated head to Athena. In 2016, this helmet was on display with the Kallos Gallery at Frieze Masters.

A Greek Geometric Bronze Figure of a Horse

This figure is a strong representation of Greece’s Geometric period (circa 8th century B.C.). Although the geometric art style mainly appeared in vases, sculptures followed suit. Artists would craft bull and deer statues with “limbs” extending from their necks into a circular shape.

The above figure of a horse is slightly modified, showing an arch within the limbs to create an elongated appearance. This niche technique makes the above figure stand out as a uniquely stylistic gem of its time.

From the collection of Rome’s antiquities Dealer Giorgio Sangiorgi (1886-1965) comes this miniature masterpiece. This scaraboid, dated to the 4th century, shows an extremely detailed Perseus approaching Medusa on a 3cm long “canvas.” Engraved gems like this were common in ancient Greece and Rome.

Buyers normally engraved them with their favorite philosophers or figures on amethyst, agate, or jasper stones. But multicolored jasper like this is a rare fine among such jewelry, making this a gem in both material and craftmanship.

The Chalcidian helmet, dated to 5th century B.C., strikes a balance between warfare and beauty. The Greeks adapted it from the previous Corinthian model to feel much lighter, and create an open space where soldiers’ ears would be. But what makes this helmet unique is that its more finely decorated than its counterparts.

Other Chalcidian helmets don’t have a swirl adorning their cheek plates, or a framed crest at the center of their foreheads. It’s likely that this one belonged to a wealthier hoplite due to its one-of-a-kind ornamentation.

This head’s characteristics indicate that it may have been the work of Skopas, a revered Greek sculptor of the Hellenistic period. Skopas was famous for work such as the lost Meleager statue.

Here, we see only one of two marble statues that depict Hermes, god of trade, with a lotus leaf headdress. Such a feature was common in smaller Roman figures, but this rare attribute, alongside its prestigious creator, make it a piece that’s both rare and culturally fascinating.

These reclining female figures are iconic of the Cycladic civilization. The Cycladic people lived in the Aegean islands off the coast of Greece, including modern day Mykonos. Although the purpose of these figures is unknown, archeologists have found them in very few Cycladic graves, indicating that they were reserved for the elite.

This one stands out because it’s completely intent with no excessive restoration. It also combines two of the major art styles of the Cycladic time: Late Spedos, known for its slender arms, and Dokathismata, known for its sharp geometry.

These figures inspired many artists of the modernist movement, such as Picasso, and Modigliani. It is one of 12 sculptures known by its artist, nicknamed the Schuster Master, who carved exquisitely-rendered female figures like the one above.

Phidias: The Greatest Sculptor Of Antiquity