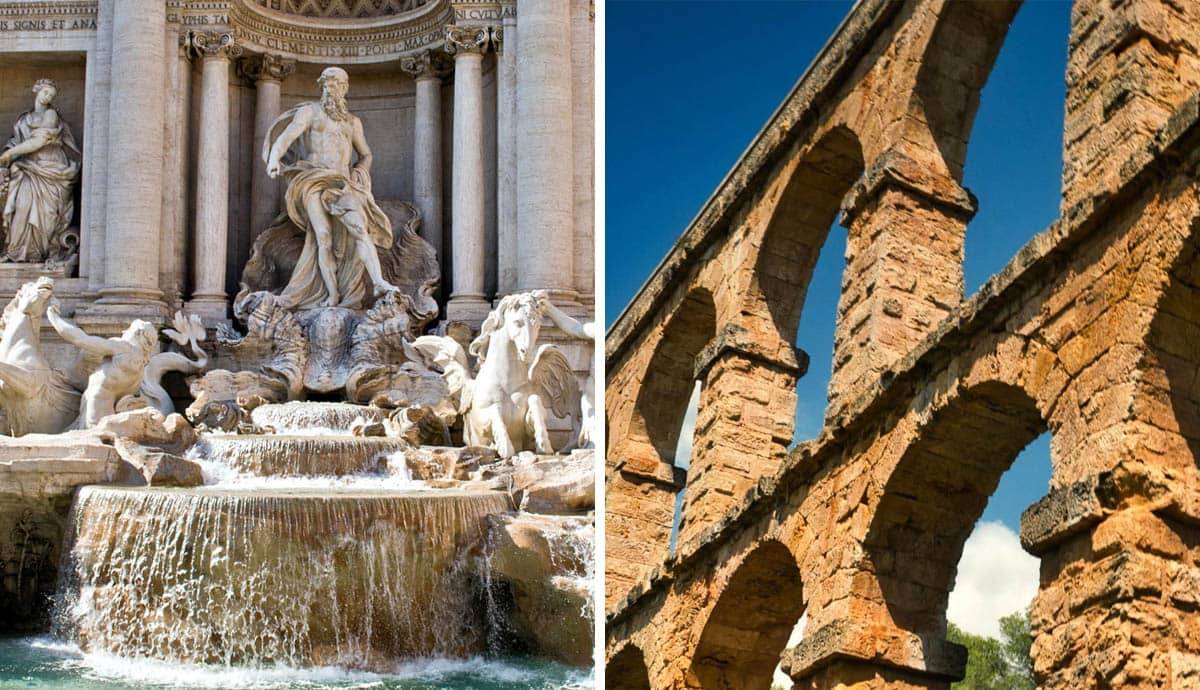 Aqueducts were the great waterways of ancient Rome. They transported fresh water from the mountains into the heart of cities to create fountains, drinking water and baths. Ancient Egyptian and Indian civilizations before the Romans had made use of aqueducts. But the Romans were the first to create them on such a colossal scale. Many are still surviving today, some intact, others partially ruined. We can recognize them by their rows and rows of triumphal arches that span over rivers and fields of the former Roman Empire. Let’s take a look at some of the most fascinating facts about Rome’s incredible aqueducts.

Aqueducts Ran Both Over and Under the Ground

In order to carry water such long distances, Roman aqueducts were highly complex systems that ran water both over and under the ground. Although the arched bridges are evidence of their former glory, there was in fact much more activity going on unseen below the ground. This was to allow many millions of gallons of fresh water every day into the heart of ancient Roman cities where the vast majority of the population lived.

The materials Romans used to build aqueducts were stone, brick and their own form of cement, known as pozzolana. They made pozzolana using an ingenious mixture of volcanic stone with powdered lime, sand and water. It was this substance that gave their constructions an extraordinary strength, allowing them to survive for thousands of years. Romans used to make their water pipes out of lead. But when they discovered its toxic properties, they switched to using clay pipes.

They Needed a Huge Amount of Maintenance

Perhaps unsurprisingly, Roman aqueducts needed a huge amount of maintenance to keep them running smoothly. Roman emperors appointed a Curator Aquarum (or water curator) to oversee the care of Rome’s waterways. These curators employed vast teams of slaves, paid laborers and legions to keep up with maintenance, repairs, contamination and damage.

They Relied on a Downward Slope

Romans were able to transport water such long distances by building their aqueducts on downward slopes, which sometimes spanned hundreds of kilometers under and over ground. In places where land was more uneven and irregular, Romans even invented an ingenious system of high-pressure pipelines, called inverted syphons, which miraculously allowed water to travel uphill!

In Total, Romans Built Over 200 Aqueducts Across the Empire!

Across the entire Roman Empire, the Romans built an incredible number of over 200 aqueducts to supply their many cities with fresh running water. Having a supply of water became a status symbol for the empire, showing off how advanced and sophisticated (and clean!) they really were. Today, evidence of Rome’s ancient waterways exist all around the world, from the United Kingdom to France, North Africa and the Middle East. Some of the most famous are the Pont du Gard in France, Valens Aqueduct in Turkey, Ferreres Aqueduct in Spain and the Caesarea Aqueduct in Israel.

The City of Rome Alone Had 11 Different Aqueducts

At its peak in the 6th century CE, the city of Rome had 11 different aqueducts, which were needed to keep the vast population clean and healthy. Romans gradually built them over a span of around 500 years as the city became more prosperous and densely populated. The most famous of these is the Aqua Virgo, built in 19 BCE during the reign of Emperor Augustus. By some miracle, this construction is still fully functioning today, and it runs all the way from the Italian mountains into the heart of Rome, supplying water to the iconic Trevi Fountain. But be warned! Today its water is chemically treated and recycled, making it not safe for drinking, however tempting it might look.