HomeAnswersWhat Are the Most Famous Aqueducts of Ancient Rome? 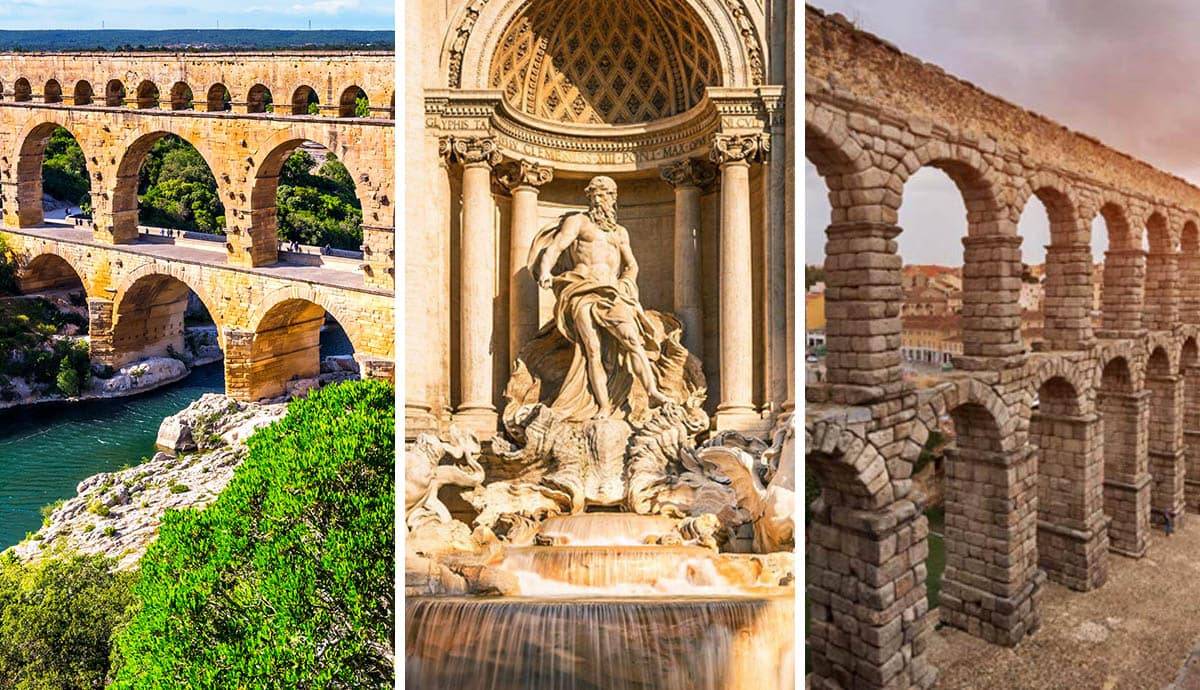 Aqueducts were a vital aspect of society in ancient Rome, channeling fresh water from remote sources to city centers. Although aqueducts had been in existence before Roman times, it was the Romans who turned them into incredible architectural marvels, with impressive arched bridges and complex internal structures that could span across the territories of Rome. Many of these aqueducts have survived for thousands of years, a testament to the wonders of Roman engineering. Let’s take a look through some of ancient Rome’s most famous aqueducts that are still in existence today.

The stunning Pont du Gard is one of the best-preserved aqueducts of Roman times, and was built during the first century CE. Once the 50-kilometre-long water source for the ancient Roman colony of Nemausus, this colossal construction is now situated in present day Nimes, France. Its bridge runs over the Gardon River, and is an incredible 48.8 meters high, making it one of the tallest aqueduct bridges in the world.

The Aqua Virgo has an important place in Roman history, as one of the first aqueducts to bring water into the city of Rome. It was originally built in 19 BCE by Marcus Agrippa during the reign of Emperor Augustus, and underwent various restoration projects throughout the centuries to keep it standing strong. Although it fell out of use following the fall of the Roman Empire, it was renovated during the Renaissance to transport 80,000 cubic meters of fresh water into the Trevi Fountain in the center of present-day Rome, and it continues to perform this role well today!

One of the last aqueducts to be built during the Roman Empire, the Aqua Alexandrina was constructed between 208 and 235 CE by Alexander Severus to provide water for the city of Rome. A particularly ambitious feat, it is 22.4 kilometers in length and almost all of its construction is built on a long series of arches above the ground. It once carried water from Pantano Borghese to the Baths of Alexander on the Campus Martius, but fell out of use in the 8th century CE. Today you can still find the remains of the aqueduct in the Roman district of Centocelle, along Via dei Pioppi and Via degli Olmi, where it is surrounded by modern neighborhood developments.

Regarded as one of Rome’s greatest aqueducts, the Aqua Claudia was begun by the notorious Emperor Caligula in 38 CE, and completed by Emperor Claudius in 54 CE. Mainly underground, this aqueduct was once 69 kilometers long and carried water at the speed of 80 cubic feet per second! Because of this fast rate, the Aqua Claudia came to supply over 20% of Rome’s water. Partially destroyed today, the Aqua Claudia’s impressive archways can still be seen today in the Parco Degli Acquedotti (the Park of the Aqueducts) and the Via Lemonia in Rome.

The almighty, two-tiered Valens aqueduct is one of ancient Rome’s most impressive relics. Built by Roman Emperor Valens I in the 4th century CE, it provided gallons of fresh water from the hills of Istanbul to the Byzantine and Ottoman Empires. Today this incredible 436-kilometre-long construction is considered the longest aqueduct of the ancient world. Visitors can see surviving ruins of the Valens Aqueduct bridge (and even drive right under it in their car!) in the Fatih district of Istanbul, where it stands remarkably well-preserved as an icon of the Eastern Roman Empire and the city of Constantinople.

The aqueduct of Segovia was built during the second half of the 1st century, to supply water from the Frio River to the city. Once a prominent emblem of the Roman Empire, its setting in present-day Segovia, in Spain’s central Catille and Leon region, commemorates the European city’s diverse history. At around 30 meters high, the aqueduct’s double-layer bridge looms over the city and stretches out 800 meters across its horizon, creating an impressively vast display of Roman architectural engineering.

How to Establish an Empire: The Emperor Augustus Transforms Rome