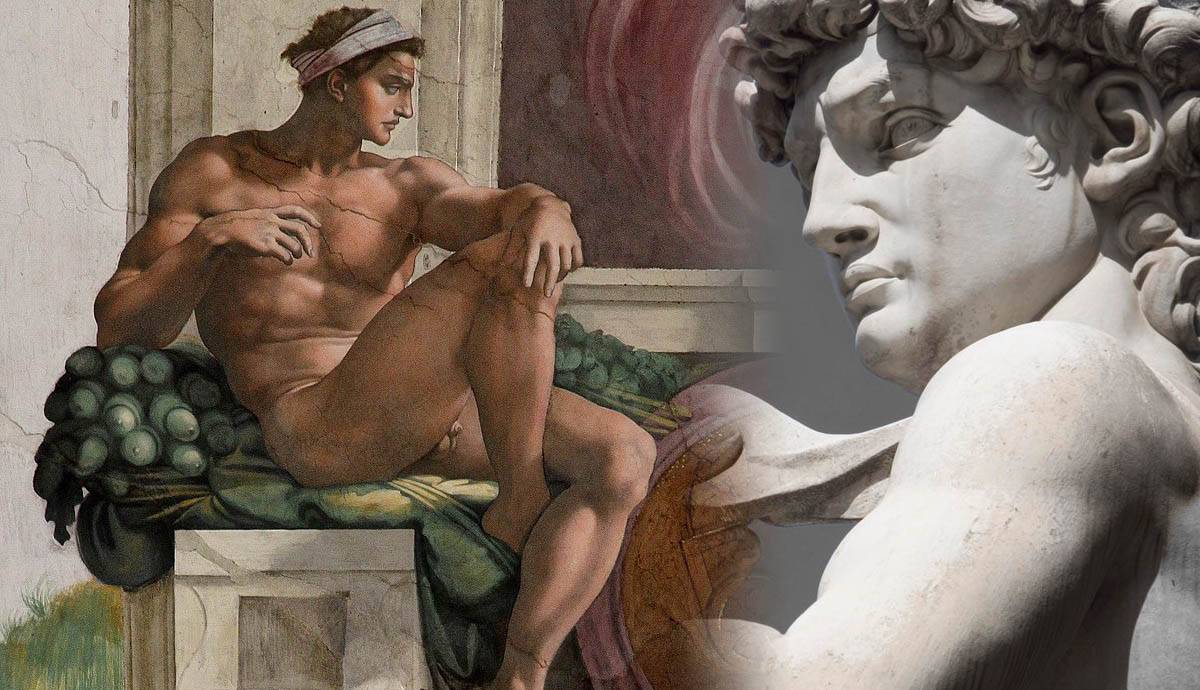 The great and monumental Michelangelo, master of the High Renaissance, produced some of the most famous and impressive artworks of all time. From his colossal statue of David to the incredible Sistine Chapel ceiling, his artwork is a testament to the scope and ambition of human achievement. A deep understanding of the human body was at the core of Michelangelo’s art, and almost all his paintings featured, or were based on the male body. This has led many to speculate about his sexuality. Can we uncover any truths that suggest Michelangelo was gay, or is this one of those mysterious questions that will never be answered? Let’s have a look at the evidence and see…

Although Michelangelo painted a huge variety of figures throughout his incredibly prolific career, his most notable and ambitious works of art are undoubtedly dominated by the male form, which has led many to speculate about whether or not this is evidence he was gay. His David, for example, is considered one of his finest contributions to the history of art, and it portrays an idealised young man with incredible attention to detail, demonstrating just how knowledgeable the artist was of the nude male body. Similarly, in Michelangelo’s Sistine Chapel ceiling, the emphasis is on male nudes, who he painstakingly conveyed as athletic, nubile and muscular. He painted his male figures entirely nude, leaving nothing to the imagination, an act considered so shocking that another artist was hired to paint little leaves and loincloths over their manhood.

Michelangelo Invented the Use of Ignudi in Fresco Painting

In the Sistine Chapel ceiling Michelangelo introduced a series of 20 seated male nudes which he called “The Ignudi”, coming from the Italian word ‘nudo’ meaning naked, or its singular form, ‘ignudo.’ His inclusion of these youthful and athletic male nudes in pairs of four were not related to the Biblical themes of the paintings, and they had not been seen in prior fresco paintings, leading many to speculate on their intended meaning. Were they angels looking on as the stories unfolded, or idealised men representing the artist’s inner desires?

Some Say He Based His Female Nudes on Men’s Bodies

Some think that even when he was painting women, Michelangelo used male models to pose for him. We can see evidence that suggests this in the women who featured in the Sistine Chapel ceiling, who have stocky, muscular frames and strong arms, and his marble sculptures in the Medici Chapel, whose bodies seem to feature prominent pectoral muscles. Did this mean that Michelangelo was gay? It’s possible, but not conclusive. During the Renaissance the male form was idealised more than women’s bodies. This suggests Michelangelo might have simply been responding to cultural trends rather than his own preferences.

Many believe Michelangelo fell in love with a young nobleman named Tommaso dei Cavalieri in his later years. The evidence for this love is in a series of poems with somewhat erotic undertones that Michelangelo dedicated to Cavalieri. In some poems, Michelangelo even describes how he wants to be Cavalieri’s clothing so he can wrap himself around his body, or be his shoes and kiss his feet, imagery that implies a romantic infatuation. Although the pair had a close friendship, history suggests they never had an actual romantic relationship, which might have been partly because of their age gap – Michelangelo was 57 and Cavalieri was only 23. Even so, Cavalieri might have been the model for some of Michelangelo’s most famous artworks, including the image of Christ in his Last Judgement for the Sistine Chapel, which must have been the ultimate compliment during the Renaissance.

The Truth Is, We Will Never Really Know

Although many have speculated about Michelangelo’s sexuality, the truth is, we will never really know, even if evidence does suggest he leaned towards a preference for men. It is thought Michelangelo was a rather solitary figure who was almost entirely dedicated to his obsessive passion for art, a true love affair that has benefited society for centuries since.