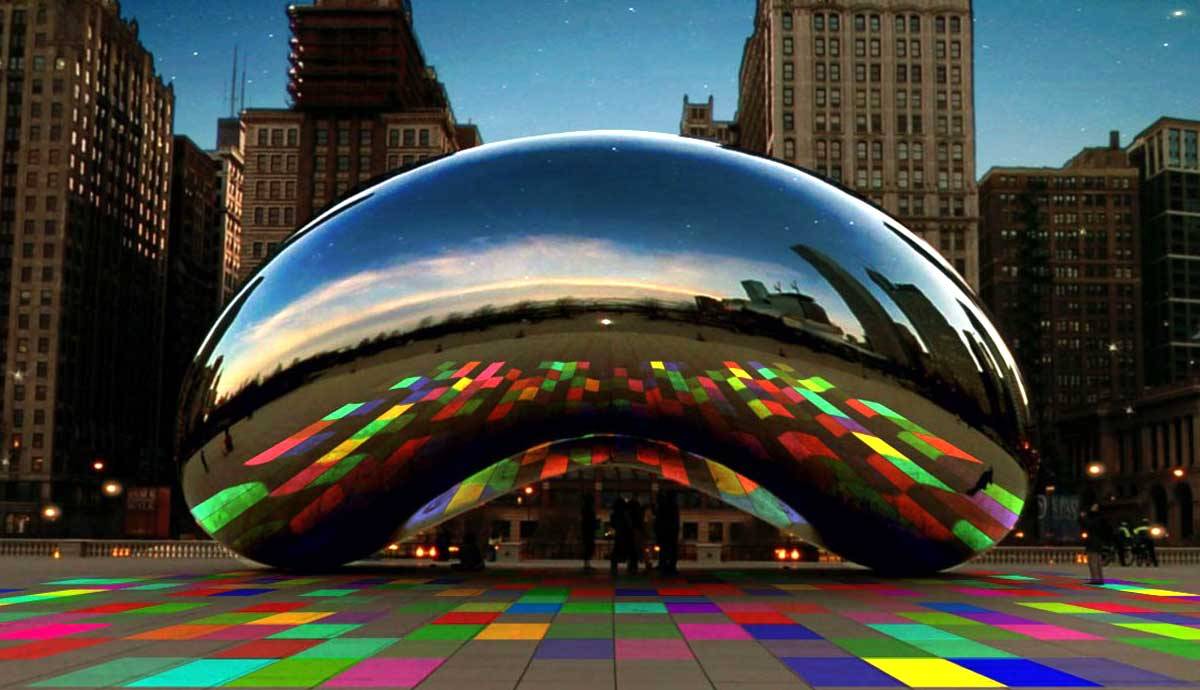 British-Indian sculptor Anish Kapoor has made some of the most awe-inspiring and breath-takingly ambitious sculptures of all time. They have ranged from giant trains made of red wax to giant amorphous mirrored forms that reflect the world as it rushes by around them. Almost always abstract in nature, Kapoor’s forms test and stretch the scope and boundaries of what sculpture can be. They also express contemplative and introspective states of mind. In this article we celebrate the legacy of this great sculptor with a list of his 5 best sculptures.

Anish Kapoor made his strikingly vast public art sculpture Dismemberment, Site 1, 2009, for a wide-open stretch of land in Gibbs Farm, Kaipara Harbour, New Zealand. Amazingly, it is as large as an eight-story building. Kapoor made this sculpture from Serge Ferrari textile, a monumentally strong fabric that can withstand the harshest weather conditions. Here it stretches out like a large trumpet, with a bell shape at either end. The artist designed this unusual shape to amplify the sounds of the landscape as they rush through it. But the sculpture also has a dramatic, theatrical impact that contrasts with the green space around it.

Known colloquially as “The Bean” for its curious elliptical shape, Anish Kapoor’s Cloud Gate, 2004-6, is in the AT&T Plaza at Millennium Park in Chicago. Kapoor made this monolithic sculpture from 110 tons of highly polished stainless steel, which he shaped into a mirrored infinity loop that curves around itself. Cloud Gate is 66 feet long and 33 feet high, making it one of the largest public artworks in existence. In keeping with the spirit of public art, Kapoor encourages visitors to interact with the work, and to see themselves and the world around them reflected back in a variety of distorted new ways.

Depending on where it is shown, Anish Kapoor’s giant, shiny sculpture Sky Mirror, 2001, takes on different qualities. Designed in a convex shape, this huge, five-meter mirror reflects the sky above it and turns it upside down. Lord Cholmondeley, owner of Houghton Hall where Kapoor has previously exhibited this work says this sculpture “brings the heavens literally down to earth.” The neatest trick about this sculpture, however, is its incredibly fluidity – in different contexts or weather conditions, viewing Kapoor’s Sky Mirror can create viewing experiences that are as mutable and changeable as the patterns of nature or the city around it.

Whirlpools, vortexes and concave shapes are a recurring theme in Kapoor’s practice, and the slightly terrifying Descension is no exception. Originally made as a temporary exhibit for India’s Kochi-Muziris Biennale in 2014, Kapoor later reconfigured this same concept for a solo exhibition at Versailles in 2016. The sculpture is a giant whirlpool that swirls into a deep central vortex. Kapoor even dyed the water in his pool to make it black, a trick that made the murky depths of his pool seem even darker than before. This fascination with black later led Kapoor into his Vantablack controversy, but that’s another story…

Red wax and pigment are another recurring theme in Kapoor’s practice. He has made a series of varying sculptures and installations that play with the curious mutability of pigments, either in powdered form, or transformed into his own trademark sticky substance which is made from a combination of wax, Vaseline and pigment. Svayambhu must surely be one of Kapoor’s most impressive sculptures in the ‘red’ theme. Kapoor has created several versions of this installation, notably for the Haus der Kunst (House of Art) in Munich in 2007, and the Royal Academy in London in 2009. The artwork is essentially a ‘train’ of red wax that runs along a track in the gallery space, filling it with a delightfully messy pathway of sticky red substance.