What Are Marcel Duchamp’s Strangest Artworks? 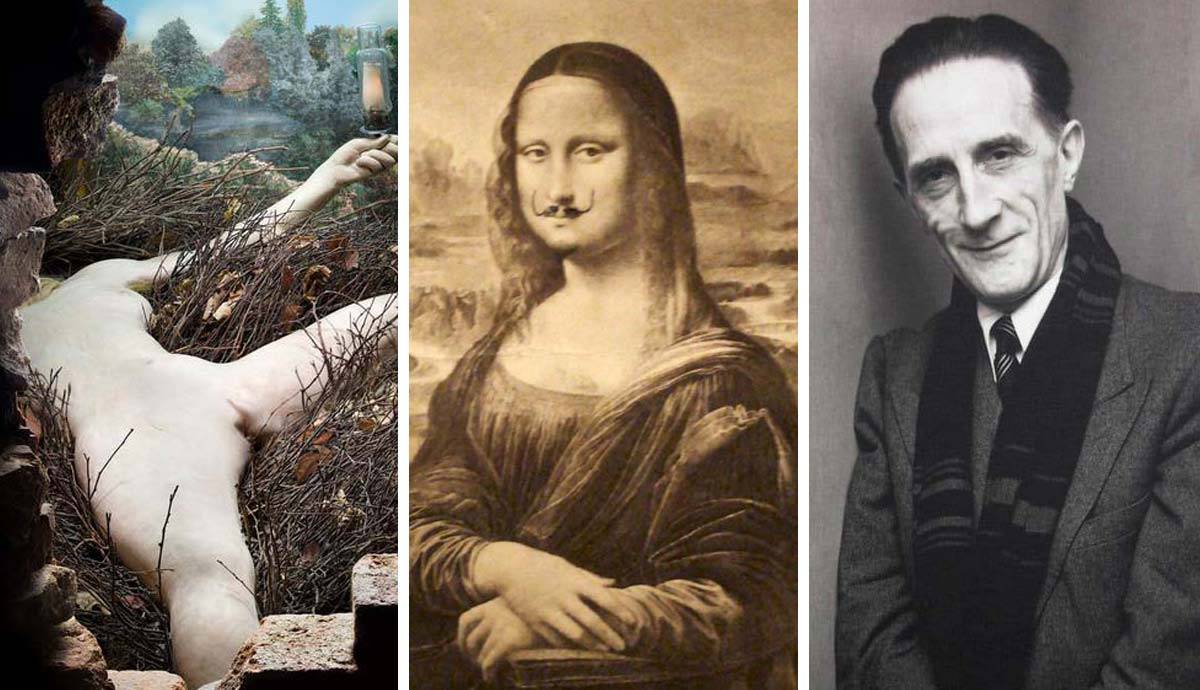 Marcel Duchamp might be best remembered as the Dada experimentalist of the early 20th century, who made boundary pushing art that shocked audiences used to seeing paintings hanging on the wall and sculptures sitting on plinths. Broken glass, spinning bike wheels, reels of string, urinals and suitcases were all fair game for this agent provocateur. We celebrate Conceptual Art’s founding father with a list of Marcel Duchamp‘s strangest artworks.

This vast installation made from glass and metal must surely be one of Marcel Duchamp’s strangest artworks. He worked on this curious, Cubist-style construct over a period of 8 years. Even then, he still hadn’t finished it. Duchamp divided the work horizontally into 2 parts. The upper part is the female area, which Duchamp called the ‘Bride’s Domain.’ The lower area is male, or the ‘Bachelor Apparatus.’ Breaking down male and female bodies into insect or machine hybrids, Marcel Duchamp makes reference to the lovemaking process as a strangely mechanical act with no physical contact. His disturbing human-machine hybrids here echo the angular, detached forms of Cubism. But he also prefigures the Surrealist distortions of the human body that were still to come. When movers damaged this artwork in transit, Duchamp embraced the cracks as an exciting new development.

Bicycle Wheel, 1913, is a classic example of Marcel Duchamp’s ‘Readymade’ art. In this genre Duchamp took ordinary, functional objects and refashioned them as works of art. Duchamp called any sculpture that combined more than one object an ‘assisted Readymade.’ In this ‘Assisted Readymade’, Duchamp has attached a bike wheel to a kitchen stool. This simple act renders each object unusable, and forcing us to consider them in a new way. Duchamp was particularly interested in the idea of bringing the sensations of motion into his art, making him an early practitioner of Kinetic Art. The bike wheel allowed him to play with this concept, as he explained, “I had the happy idea to fasten a bicycle wheel to a kitchen stool and watch it turn.”

A postcard version of Leonardo da Vinci’s Mona Lisa is given a cheeky, mischievous makeover in this deliberate act of defacement. Marcel Duchamp not only shows his irreverence to the revered art of the past, but by transforming the Mona Lisa into a seemingly masculine figure, he questions the divide between male and female genders. The strange title of Duchamp’s work might seem even more confusing, but it was a calculated joke – it sounds out in French the phrase “Elle a chaud au cul” (“she has a hot ass”).

During a 1942 Surrealist exhibition in New York titled First Papers of Surrealism, Marcel Duchamp chose to mix things up in his characteristically irreverent manner. He filled the entire exhibition space with string, weaving it all around the other exhibits to form a giant, complex web. His installation forced visitors of the space to squeeze in and out of the art in unusual ways. This made it almost impossible to see the other art on display. To further disrupt the exhibition, on its opening night, Duchamp hired a group of children to dress in sports clothes and play loudly. What else could you possibly expect from an exhibition about Surrealism?

One of Marcel Duchamp’s most surprising and unusual artworks was the installation titled Étant Donnés. Duchamp had been secretly working on this artwork for 20 years. It was only when he donated the work posthumously to the Philadelphia Museum of Art that anyone saw it. Hidden behind two tiny peepholes, the installation revealed a vast, sprawling construction. It featured a miniature forest, a waterfall, and a naked woman sprawled out across the grass. No one really knew what to make of the work, with its strange metaphors and analogies, much like Duchamp’s earlier artwork The Bride Stripped Bare by her Bachelors, Even, 1915-23.