HomePhilosophyWhat Does “I Think, Therefore I Am” Really Mean?

What Does “I Think, Therefore I Am” Really Mean?

René Descartes’ observation that “I think, therefore I am” is one of philosophy’s most famous sayings. But what does it actually mean? This article explores Cartesian thought, particularly Descartes’ epistemology. 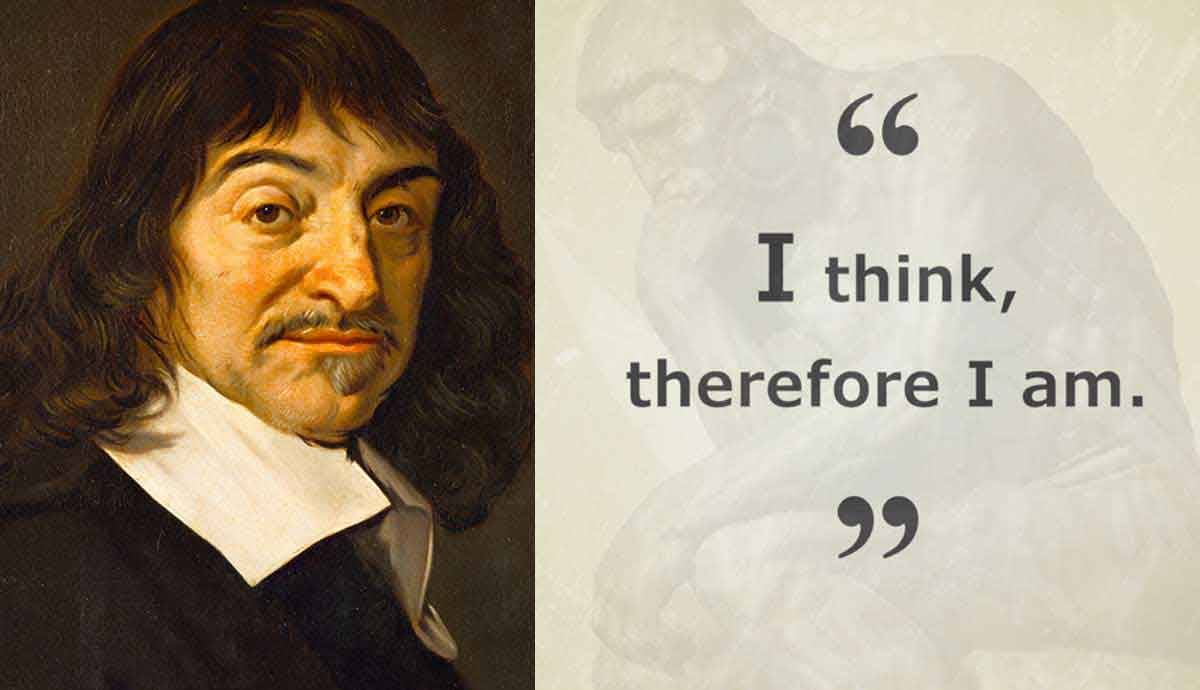 Descartes is often referred to as the ‘father of modern philosophy’ due to his groundbreaking approach to philosophical enquiry. He was one of the first notable figures to completely abandon Scholastic Aristotelianism, a school of thought which had dominated European university teaching for centuries. He was also responsible for developing a modern theory of mind-body dualism and promoting a new method of science which was grounded in experiments and scientific observations. However, Descartes is best-known among philosophers for his system of methodical doubt (also known as Cartesian doubt, for obvious reasons!). As we will see, he was highly skeptical of any claim to truth by past philosophers. He also doubted the dogma presented as truth by 17th century religious authorities. Descartes even questioned the reliability of our individual senses and cognitive faculties. So, what is truth? Is there anything we can confidently point to and accept as fact? These questions eventually led Descartes to develop one of his most famous dictums: Cogito, Ergo Sum or “I think, therefore I am”.

The Origins of “I Think, Therefore I Am: René Descartes’ Life

René Descartes (1596-1650) was a French mathematician, scientist and philosopher. He was born and raised in France, but traveled extensively around Europe and spent most of his working life in the Dutch Republic.

Descartes was well-known during his lifetime for his commitment to open dialogue with other philosophers. He invited other thinkers to publish responses to his work, then he collected them and responded to their reflections in turn. After a successful academic career, Descartes spent the last year of his life in Sweden, tutoring Queen Christina (although apparently the two didn’t get on!). Descartes died of pneumonia in February 1650, having earned fame as one of Europe’s most famous philosophers.

Descartes and the Meditations on First Philosophy

In 1641, Descartes published his Meditations on First Philosophy. He wrote the work in Latin and it contains critical responses from thinkers including Thomas Hobbes and Pierre Gassendi (as well as Descartes’ replies to them).

The Meditations are important because they set out Descartes’ epistemology. Descartes is seeking a specific kind of knowledge which some academics have referred to as ‘perfect knowledge’. Descartes describes this in the Meditations thus: “[As] soon as we think that we correctly perceive something, we are spontaneously convinced that it is true. Now if this conviction is so firm that it is impossible for us ever to have any reason for doubting what we are convinced of, then there are no further questions for us to ask: we have everything that we could reasonably want” (Cottingham et al, 1984).

Descartes believes that perfect knowledge requires us never to have any reason whatsoever to doubt it. In other words, the absence of doubt is what makes perfect knowledge. This is a very high standard to apply to any given statement of supposed fact! Still, in the Meditations Descartes persists in trying to establish various items of knowledge that we can rely on with absolute certainty.

Cogito Ergo Sum, or “I Think, Therefore I am”, in the Meditations

Descartes spends much of the first part of the Meditations establishing how and why everything we assume to be true can be doubted. He establishes that all his thoughts might well be mistaken. Fortunately, help is at hand. It comes in the form of his ‘Cogito Ergo Sum’, which we will henceforth refer to here as the ‘Cogito’.

At the start of the ‘Second Meditation’, Descartes observes the following:

“I have convinced myself that there is absolutely nothing in the world, no sky, no earth, no minds, no bodies. Does it now follow that I too do not exist? No: if I convinced myself of something then I certainly existed. But there is a deceiver of supreme power and cunning who is deliberately and constantly deceiving me.

In that case I too undoubtedly exist, if he is deceiving me; and let him deceive me as much as he can, he will never bring it about that I am nothing so long as I think that I am something. So after considering everything very thoroughly, I must finally conclude that this proposition, I am, I exist, is necessarily true whenever it is put forward by me or conceived in my mind.”
(Cottingham et al, 1984)

Let’s unpack this passage a little bit. Descartes first asks whether he can even be sure that he exists. But he then realizes this isn’t in doubt, because if he can convince himself of something then he must exist.

He then argues that even if an all-powerful, evil demon tried to deceive Descartes into thinking that he exists when he actually doesn’t, Descartes must exist in order for the demon to try and deceive him in the first place. Therefore whenever he thinks, he exists.

Although it’s not spelled out word for word here, Descartes later clarified this position through his famous ‘Cogito’ i.e. the philosophical saying ‘I think, therefore I am’. Even though Descartes has previously argued that the existence of his physical body can be doubted, the existence of his thinking cannot. Philosopher Barry Stroud helped to explain this by noting: “A thinker obviously could never be wrong in thinking ‘I think’”, and “no one who thinks could think falsely that he exists” (Stroud, 2008).

Of course, there have been plenty of criticisms of Descartes’ Cogito. But this is the basic meaning attached to his most famous and thought-provoking(!) dictum.

Further Points of Discussion Concerning “I Think, Therefore I Am”

What’s most interesting about this phrase is how personal it is to the interlocutor who speaks it aloud. The phrase has to be in the first-person and falls apart if we change it to the third-person e.g. “Descartes thinks, therefore he is.” I can’t say with any unshakeable certainty that Descartes is thinking. I can only assert my own thinking beyond any reasonable doubt.

The Cogito also ceases to function if we change the tense of the phrase. I cannot say: “I existed last weekend, because I was thinking then.” What if I’m misremembering events from last weekend? Doubt instantly floods into this phrase. The Cogito is grounded in the idea that we cannot try and think away what we are thinking right now in the present.

Many philosophers have discussed what Descartes is referring to when he says “I” in this sentence. Particularly since Descartes himself states: “But I do not yet have a sufficient understanding of what this ‘I’ is, that now necessarily exists” (Cottingham et al, 1984). In other words, Descartes has established that he exists, but doesn’t seem to know what he is.

Pierre Gassendi was one of the first thinkers to point out that we can’t be sure what the “I” means. Therefore the only thing that Descartes can reliably say is that “thoughts are happening” or “thinking is occurring” because we don’t know from this sentence that an entity is thinking. There is no evidence from the Cogito for the existence of a rational thinking thing.

Descartes and the Influence of “I Think, Therefore I Am” on Later Philosophy

Descartes would probably have been surprised by the influence of his Cogito on later thought. But the Meditations involve a radical shift in the history of philosophy. Rather than debating “what is true”, Descartes asked “of what can I be certain?”. In doing so, he removed the authority of various bodies (particularly the Church) to claim truth and instead showed how certainty relies on our individual judgements.

In most modern societies, God is not accepted as the ultimate guarantor of truth. Instead, human beings are their own guarantors, equipped with reason and the ability to doubt. Thanks to this shift, Descartes is often credited with inspiring the Enlightenment to look outside religious doctrine for a proper understanding of the world.

Stroud, Barry, 2008. “Our Debt to Descartes,” in A Companion to Descartes, ed. Janet Broughton and John Carriero, Oxford: Blackwell.