HomeAnswersWhat Is a Camera Obscura?

What Is a Camera Obscura? 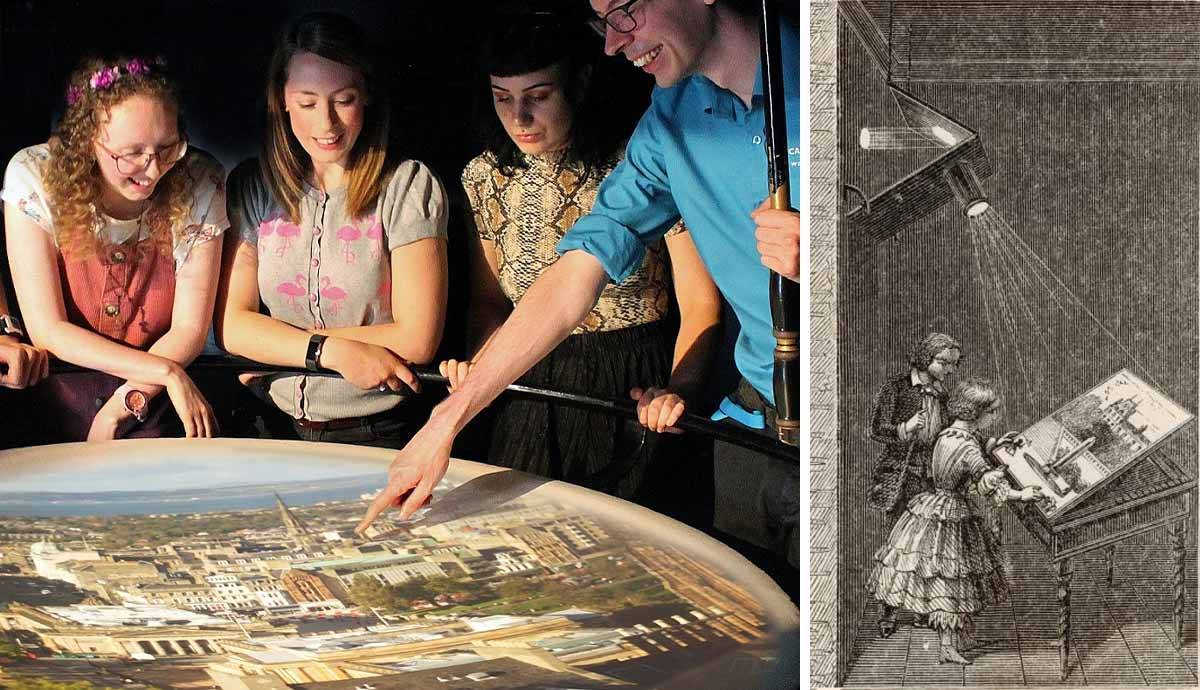 A camera obscura is the earliest form of the modern camera we know and love today. The name is Latin for ‘dark room’, or ‘dark chamber’, and makes reference to early optical devices used for projecting real world images through a tiny hole into a darkened room or box. Unlike modern cameras, the projected image is both upside-down and reversed. While the earliest camera obscura filled entire rooms, over time they became smaller, more portable and complex, hitting a high period of popularity among artists of the High Renaissance. We look through a brief history of this early camera to find out more.

The Camera Obscura Has Roots in Antiquity

Amazingly, the roots of the camera obscura can be traced all the way back to antiquity. One of the earliest recorded incidents is from the ancient Chinese philosopher Mo-tzu (or Mozi) from 400 BCE. Mo-tzu keenly observed how light from an illuminated object could pass through a tiny pinhole into a darkened room, projecting an upside-down image of an object. Ancient Greek philosopher Aristotle made use of a similar device when viewing a partial eclipse, which he projected through the hole of a sieve into a shaded leafy area of ground.

It Was a Scientific Instrument

The brilliant Muslim mathematician and astronomer Alhazen (or Ibn al-Haytham) made significant breakthroughs in his studies on human perception. He played with various pinhole camera models, and he was the first to coin the term ‘camera obscura.’ In his studies, he experimented with dark, tented spaces, into which light could pass through a small hole. The darkened chambers he worked inside became the starting point for the earliest cameras in subsequent centuries.

In the 11th century, scientists further developed the concept of the camera obscura as a tool for scientific study. It was during this time that scientists first began projecting the area of projected light onto a viewing screen. A few hundred years later, the Italian 16th century Renaissance scholar Giabattista Della Porta added a concave lens to the space where light enters the pinhole to sharpen the image, and he introduced mirrored panels to correct the early camera’s image reversal. In 1604 German astronomer Johannes Kepler created his own portable version of the camera obscura for carrying around out in the field.

The Camera Became a Useful Aid for Artists

Over the following centuries scientists continued to update the camera obscura model to make it increasingly portable. Many artists realized these portable models could be a particularly useful tool for aiding in the realism of their practice. Among the many artists who experimented with how it could help them achieve startlingly lifelike levels of realism in their two-dimensional works of art are the Venetian 18th century painters Canaletto and Francesco Guardi, and the Dutch Golden Age painter Johannes Vermeer.

The camera obscura paved the way for the first cameras in the 19th century, which could capture an image and transfer it onto photographic paper. Meanwhile, the concept of the camera obscura changed into more of a tourist attraction. Since Victorian times, large scale camera obscura have existed in various locations. Once a popular beach front attraction, they can now be found in various sites all around the world, including Edinburgh in Scotland, Bristol, England, New York, San Francisco, Aegina, Greece, and Nova Scotia, Canada. These observatories or viewing platforms allow large groups of people to gather around a flat, convex screen, area of floor, or table, in a darkened room, and view a crisp, projected version of the space outside.

What Were the Best Inventions of the Renaissance? (Top 5)