What Is Mid-Century Modernism? 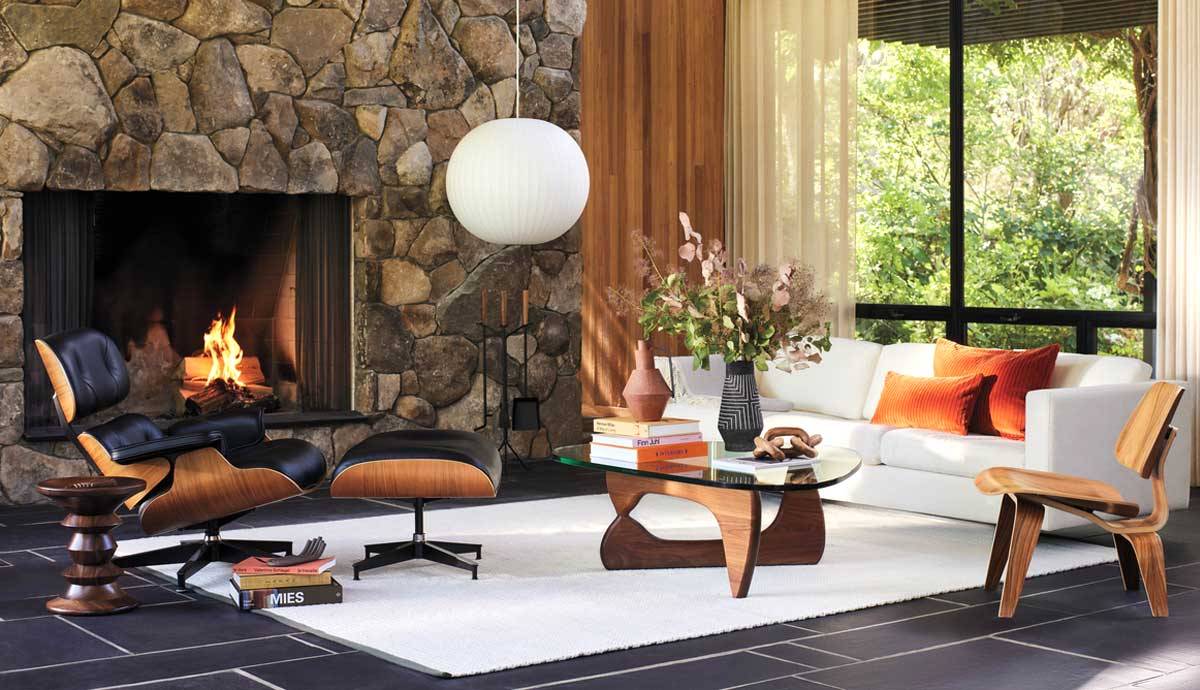 Mid-century modernism was an influential and distinctive design movement from the United States, lasting roughly from 1945 to 1959. The movement was widespread and prolific, spanning interiors, architecture, furniture, urban design, graphic design, and even household products. The curvilinear lines, fusion of natural and man-made materials, funky colors and graphic contours of this design style often fit with the popular and widespread term ‘retro’ that we all use today (think Mad Men era). Leaders of the Bauhaus style in Europe who emigrated to the United States during World War II helped shape the style, while American mass production saw a real boom in industrial production. We take a look through the defining features of this iconic lifestyle movement that swept across post-war America.

Much like the earlier Bauhaus style, mid-century modernism is defined by clean, minimal and uncluttered simplicity. In the now classic furniture designs of Charles Eames and Marcel Breuer, we see simple, geometric shapes with softened, curved edges. Breuer in particular wanted to achieve the feeling of weightlessness with metallic, tubular forms that trace the outlines of the seat form, while leaving plenty of empty space for air to circulate below. Eames, meanwhile, explored how he could mold wood and plastic into softly geometric forms to create ergonomic shapes contoured to the human body.

Another key defining feature of Mid-Century Modernism is the fusion of natural and man-made materials. Designers brought funky new materials like vinyl, plastic, fiberglass and Lucite, as well as glass, together with naturally derived raw materials such as wood, metal, and marble. Architect and furniture designer Eero Saarinen put these theories into practice with many of his most radical designs, such as his Ingalls Rink, 1958, in New Haven, Connecticut, which blends wood and metal with concrete to create a quirky and theatrical blend of old and new. In Herman Miller’s Noguchi Table, released in 1948, we see a similar blend of natural and synthetic, as the clear glass tabletop contrasts with the curving wooden form below.

Bright Pops of Colors Against Neutrals

Designers associated with Mid-Century Modernism experimented with color in a variety of ways. Some stuck mostly to neutral tones like beige, black and white, while others introduced acid-bright accents of neon orange or red. Many times, designers liked to play with how mainly neutral tones could be invigorated with these pops of intense bright. We see this color palette at play in many Mid-Century Modern interiors. Architect and designer Florence Knoll had a particular knack for creating interior spaces filled with warm neutral tones, and enlivened with bright hues here and there, through painted wall panels, furniture, or the careful placement of works of art, as in her San Francisco showroom of the 1950s.

A Blend of Indoor and Outdoor

A fusion of indoor and outdoor space was a hallmark feature of Mid-century Modernism in architecture and interior design, which tied in with the notion of blending natural and man-made materials. Houses in the Mid-Century Modern style were geometric and minimal, with large floor to ceiling windows, sliding doors, and airy open plan spaces that allowed them to connect to the outside space beyond. Meanwhile, designers often created complimentary gardens that echoed the style of the building, with a simple, uniform and uncluttered aesthetic. The radical and world-famous home of Charles and Ray Eames, for example, had large, double-height glass windows that let the surrounding greenery of the garden infiltrate their living spaces. Meanwhile, inside, they contrasted the building’s geometric paneling and minimalist structures with large glossy plants to create an interior jungle.

Who Was Walter Gropius?