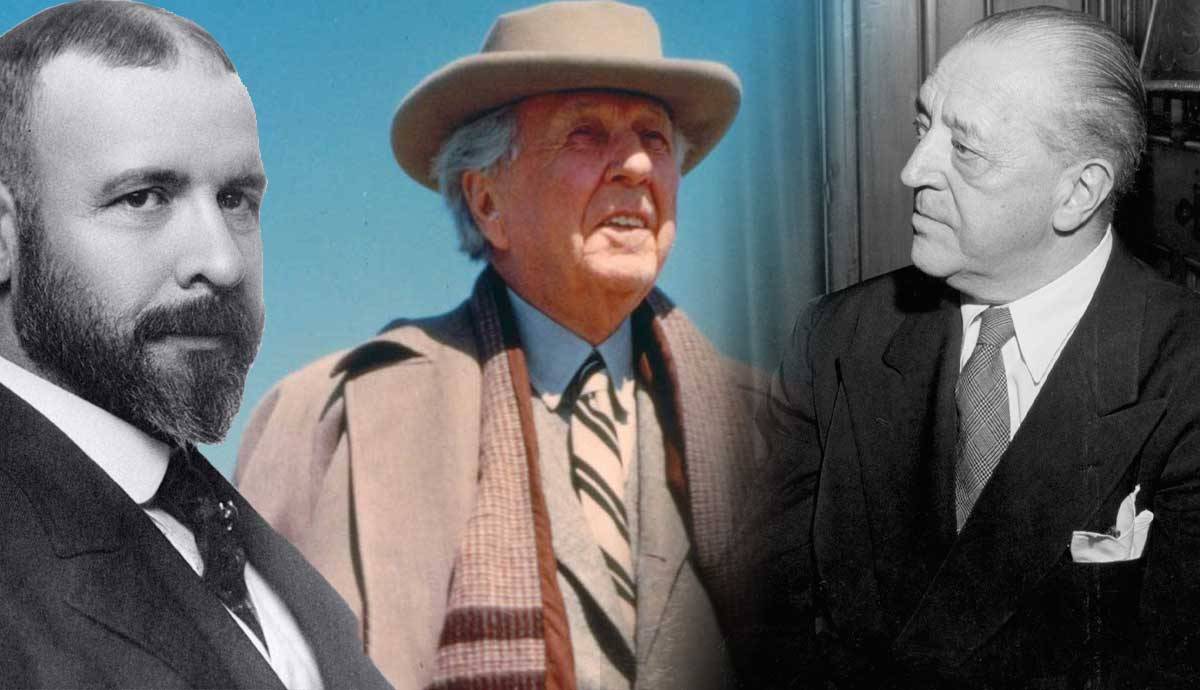 Modern architecture is all around us, informing the way we live, work and play. And there are many star architects who have designed some of the most iconic buildings and landmarks that grace countryside and city skylines around the world. But who was the first truly modern architect? Or was there really only one? We look through some of the top contenders for this almighty title, to see who seems like the most likely winner.

American architect Louis Henri Sullivan was one of the greatest architects of the late 19th and early 20th century. So much so, he is sometimes known as “the father of modernism”. Many architectural historians consider him to be the first modern architect, because he pioneered the Chicago School of Architecture, and the birth of the modern skyscraper, along with his partner Dankmar Adler.

Sullivan created over 200 buildings in his lifetime, which were designed with architectural clarity and a reference to the natural world, rather than classical ornamentation. This includes the Wainright Building in St Louis, designed in 1891, which was one of the world’s first ever high-rise buildings. In his famous essay, The Tall Office Building Artistically Considered, 1896, Sullivan coined the iconic phrase “form follows function,” a reference to his sleek and minimal attitude towards design. This saying subsequently became an enduring mantra for modernist architects, artists and designers across the modern world.

German architect Dankmar Adler is best-known for working closely alongside Louis Henri Sullivan for 15 years, under the eponymous business name Adler and Sullivan. Adler was an engineer by trade, and his innate understanding of structure informed some of the most important buildings of the American landscape, including temples, theatres, libraries and offices. With Sullivan, Adler conceived of over 180 different buildings including the Pueblo Opera House in Chicago, 1890, and the Schiller Building, 1891. The Chicago Stock Exchange Building, 1894, was considered a true highlight of their partnership, demonstrating their adoption of the Art Nouveau style into the American idiom.

American architect Frank Lloyd Wright began his career training with Adler and Sullivan. While here, Wright worked extensively on the design of James Charnley House, 1892, and he learned how to completely eliminate superfluous detail, focusing instead on geometric simplicity. Wright himself even called this design “the first modern house in America.” Over time Wright pioneered the Prairie Style of architecture, in which low-slung, geometric buildings spread out horizontally across large areas of land, in response to the surrounding environment.

One of Wright’s most famous Prairie style building designs was Fallingwater, a summer home built for a wealthy Pittsburgh couple in Bear Run, Pennsylvania, which blended with the scenery by extending out over a naturally occurring waterfall. But perhaps Wright’s greatest triumph was the Guggenheim Museum in New York, built at the end of his career in 1959 with tilted walls and a slanting spiral ramp. Wright also made a series of innovative breakthroughs that continue to shape modern architecture. For example, he was the first to bring in passive solar heating, open-plan office spaces, and multi-story hotel atriums.

German architect Ludwig Mies van der Rohe is also a hot contender for the first truly modern architect. He was director of the Bauhaus in Germany during the 1930s, and became instrumental in founding the International Style during the early 1920s. Mies later relocated to the United States, where he championed buildings made from materials that looked completely modern, such as steel, glass and concrete. Mies was also the first to coin the term “less is more” in relation to his design work. One of his most enduring icons is the famed Seagram Building in New York, completed in 1958, a looming dark monolith constructed from glass and metal that continues to dominate the city’s skyline today.