Art collector, bohemian spirit, and social figure - Peggy Guggenheim was among other things a real patron of modern art in the 20th-century. 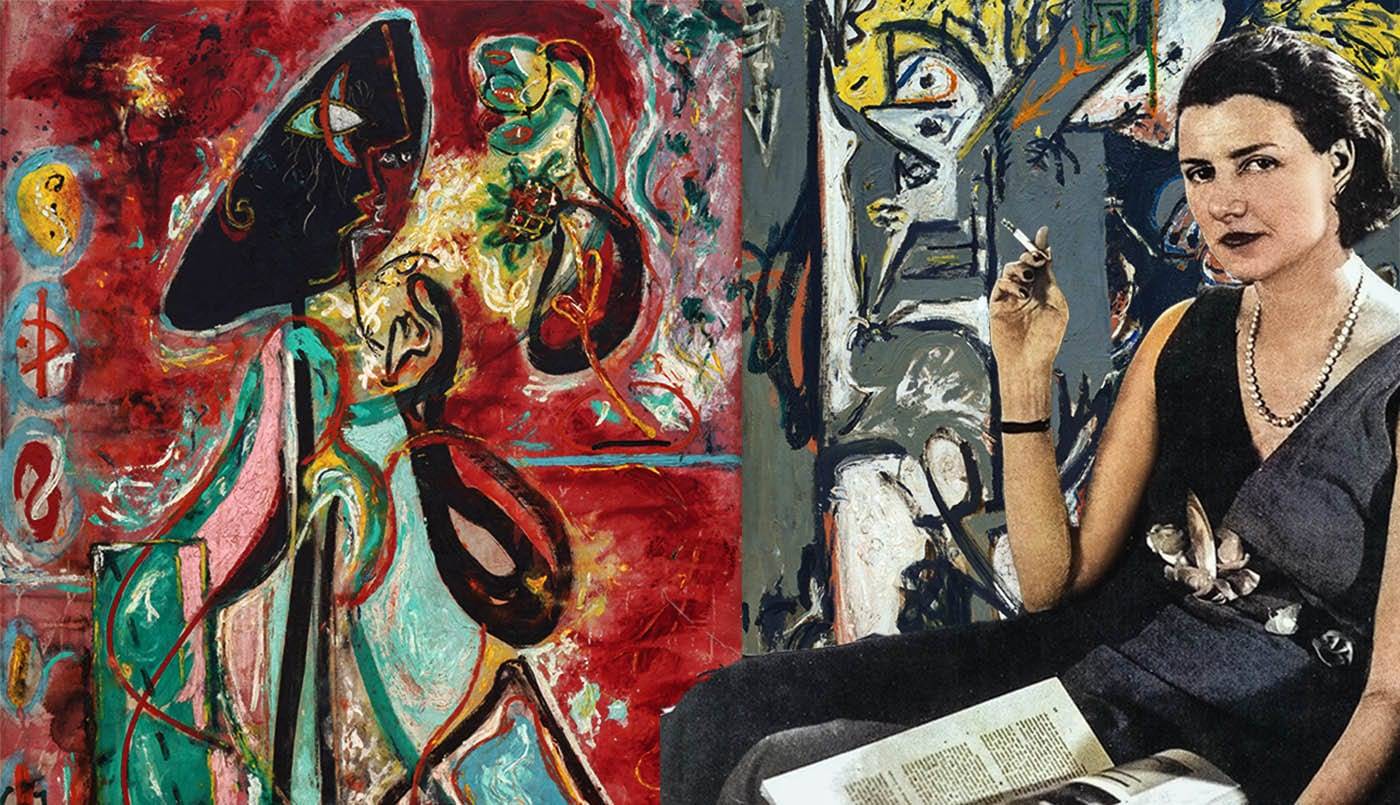 It’s fascinating to know how Peggy Guggenheim conquered the world of modern art, especially in times of war. She was born in 1898 in New York in a wealthy Jewish-American family. She inherited her fortune at a very young age, after the tragic death of her father on the luxury British steamship Titanic in 1912. She was always a rebel. She considered herself a self-educated woman, as she didn’t want to go to college for studies. In her twenties, Peggy decided to travel to Europe, where she met famous artists, authors, and members of the European avant-garde movement. Art became a way of finding herself emotionally. Her passion to promote art turned her eventually into a star.

The Early Career of Peggy Guggenheim in Europe

Her inquisitive mind and sense of adventure drew her to Paris. There, Peggy was fascinated by the bohemian world and the bourgeois society. Artists from all over Europe and the United States were making their way to Paris as if some magnet was pulling them. Soon she became in love with the Parisian avant-garde artists, poets, writers, who were all living creative, unconventional lifestyles. As she was very ambitious, she decided to create a gallery of modern art in London, enlisting the expertise of her good friends, Marcel Duchamp and Herbert Read. By that time, Peggy Guggenheim knew very little about modern art, thus she relied on the help from her friends and advisors to help compile her collection, and organize cutting-edge exhibitions of modern art.

In 1938, she decided to establish an art gallery in London, Guggenheim Jeune, as it became known. Showing the art of many young artists, introduced to the world of modern art Wassily Kandinsky with his first solo exhibition. Among others was the French surrealist Yves Tanguy, whose exhibition of contemporary sculpture caused quite a scandal in London at a time. She wanted to promote the ”outsider art” that was considered outrageous and different. This was sort of how Peggy felt about herself. By giving a huge number of shows at her gallery, that alone was a major influence on British perception of modern art. However, the English at that time couldn’t appreciate much of modern art, so Peggy decided to close the Guggenheim Jeune.

How Peggy Guggenheim Rescued Art from The Nazis

After one year of success, Peggy gave up her gallery as there was no more revenue. Although well-received, she made a loss in the first year. Once she decided to leave London, she went to Paris. In spring 1940, the Nazis invaded France. They were also known for attacking ideas of modern art. Hitler controlled the production of the artworks, by taking all those he disapproved of and putting them in an enormous exhibition in Munich called Entartete Kunst or Degenerate Art. In that exhibition, Nazis wanted to demonstrate the supposed moral decay of modernism. Peggy, among a few others, tried to save some of the greatest artworks that still remain today.

With the onset of World War II, Peggy began to collect paintings, buying a painting per day. Given the situation, artists were desperately trying to escape and sell their works. By the end of her shopping spree, she had created a huge collection of modern art, which cost her less than 40,000 $. She collected artworks including paintings by Miro, sculptures by Brancusi, as well as works by Robert Delaunay, Vantongerloo, Piet Mondrian, Georges Braque, Salvador Dalí, and many others.

The Art of Century in New York

In July 1941, Peggy fled Nazi-occupied France and returned to her native New York, together with her children, husband Lawrence Vail, as well as the German surrealist Max Ernst, who was to become her second husband. The collection that Peggy had assembled so far arrived a little later completely intact, which was rather remarkable. At that time, New York became the art center of the world. In October 1942, she opened a museum gallery in New York called the ‘Art of This Century.’ There, she exhibited a collection of cubists, abstract and surrealist art, but also held temporary exhibitions of European and American artists.

Peggy represented one of the links between European and American modernism, as well as surrealism and abstract expressionism. Ernst was received as one of the most celebrated and distinguished representatives of the surrealist movement. His marriage to Peggy Guggenheim further intensified public interest in him. The gallery was one of the first international galleries in New York mixing American and European art. It quickly became the most stimulating venue for contemporary art and a platform for young American abstract expressionists such as Jackson Pollock, Mark Rothko, Clyfford Still, and many more.

At first, Peggy showed the art of European surrealist artists in exile but soon realized it was her duty to support the art of her time too. She promoted and cultivated the work of new artists like Jackson Pollock. It was Peggy Guggenheim who gave Pollock his start in artistic life, by commissioning the painting ‘Mural’ in the summer of 1943. By November that year, Pollock had created what would be the largest work of his entire career, an extraordinary, horizontal mural. This was going to be one of the most important paintings of Abstract Expressionism. Peggy and her collection thus played a vital intermediary role in advancing the careers of several modern artists including Jackson Pollock and Max Ernst.

Despite the success of the Art of This Century in New York, Peggy wanted to return to Europe. In 1947, she closed her gallery and flew to Europe. On her way there, she decided that Venice would be her future home. For the Venice Biennale in 1948, Peggy was invited to exhibit her collection and this had an enormous effect on the future of the Biennale. It was the most comprehensive survey of abstract and surrealist modern art yet to be shown in Italy. American artists like Jackson Pollock, Mark Rothko, Clyfford Still were being exhibited internationally for the very first time. Peggy Guggenheim’s collection introduced European art lovers to the New York school of painters who had come to dominate the art scene in the 1950s.

A year later after the Biennale, Peggy bought the 18th century Venetian Palazzo Venier Dei Leoni, where her collection is housed to this day. Peggy’s personal bonds with artists continued to grow after her return to Europe. By 1951, it was not only her house, but she also opened it to the public. In total, 326 paintings and sculptures were exhibited there, including works by Pablo Picasso, Jackson Pollock, Constantin Brancusi, Joan Miró, Alexander Calder, Salvador Dalí, Willem de Kooning, Mark Rothko, Alberto Giacometti, Wassily Kandinsky, and Marcel Duchamp. Peggy Guggenheim devoted her life and her fortune to collecting and advancing the ideas of modern art and eventually succeeded. One of the world’s greatest collections of modern art, known as the Peggy Guggenheim Collection, was to mark the history of art forever.

Peggy Guggenheim Stands Out in The Art World

In a male-dominated art field, Peggy managed to stand out as a model of the liberated woman. Her life was intertwined with the activity of trying to put together a perfect collection of modern art. She is one of the few women who founded museums in the 20th century. Between 1929 and 1939, other women like Peggy Guggenheim – Gertrude Vanderbilt Whitney, Helen Clay Frick, Lillie Bliss, Abby Aldrich Rockefeller, and Mary Quinn Sullivan, also shaped the history of art, especially in the realm of emerging and modern art. Indeed, many of these women collected art, influenced the art market, and were instrumental in the promotion of modern art.

In a time when collecting art was a men’s occupation, it was more difficult to be a female artist, let alone a female patron. However, Peggy Guggenheim defied the social norms, being the first to introduce numerous artists to the general public. Women were confined to their households, but Peggy took risks long before many others did in the art world. If she had not broken the bourgeois morals, she would never have achieved this level of independence in a world dominated by men. Without women gallerists, it is hard to imagine what the history of modern art would be like today. For many years, women were excluded from traditional leadership roles. As patrons of the arts, women have proved that they deserve an important and equal place next to men.