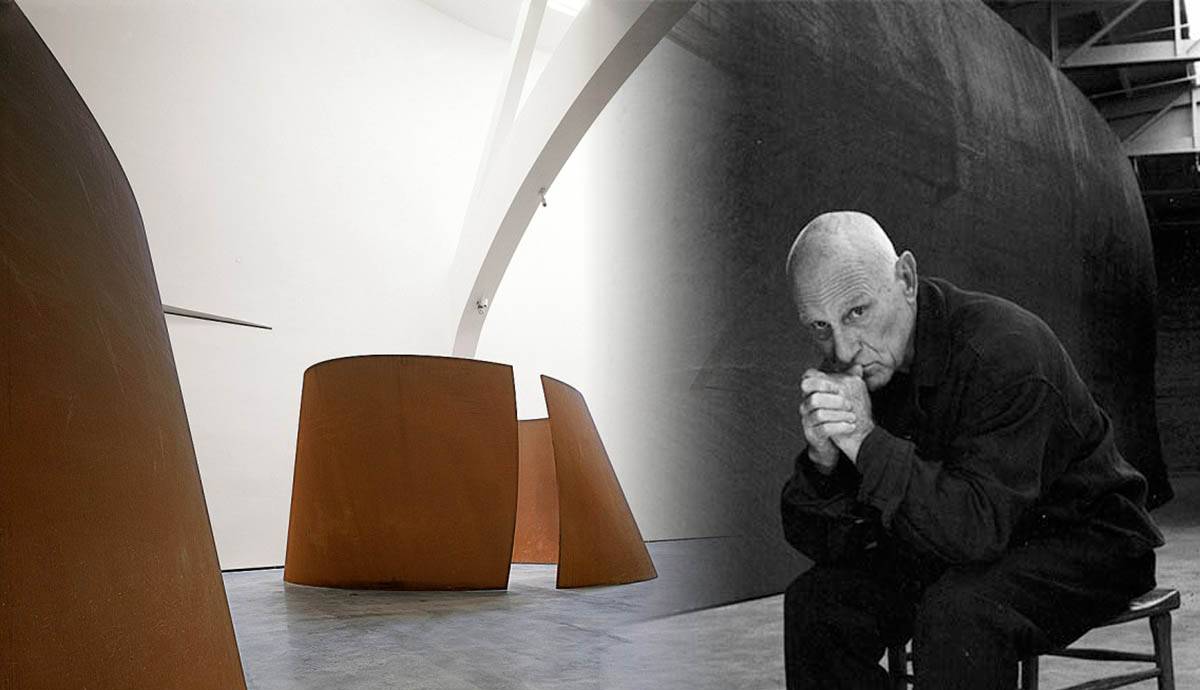 Richard Serra grew up a free spirit in San Francisco during the 1930s. Frolicking among the sand dunes in his own backyard, he had little exposure to fine arts early in life. He spent time with his working-class immigrant father, a pipe-fitter at a local Marine Shipyard. Serra recalls one of his first memories on-base witnessing an oil tanker launch, where he became instantly spellbound by his sizable surroundings. There, he gazed longingly at the ship’s hull, admiring its robust curve while it whizzed in the water. “All the raw material I needed is contained in the reserve of this memory,” Serra claimed in his old age. This adventure ultimately boosted his self-confidence enough to begin drawing, experimenting with his fierce imagination. Later in life, he’d revisit these fascinations through obvious allusions to his days alongside his father at the Marine Shipyard in San Francisco.

California similarly served as home-base throughout his early training in the late 1950s. Serra pursued an English degree from UC Berkeley before transferring to its Santa Barbara campus, where he graduated in 1961. His interest in art particularly heightened while attending Santa Barbara, given his studies under famous sculptors Howard Warshaw and Rico Lebrun. Subsequently, he obtained his M.F.A. from Yale, during which he met contemporaries Chuck Close, Brice Marden, and Nancy Graves. (He notably considered them all much “more advanced” than himself.) At Yale, Serra also took great inspiration from his teachers, mainly the world-renowned abstract painter Josef Albers. In 1963, Albers stimulated Serra’s creativity by requesting he peer-review his Interaction Of Color, a book about teaching color theory. Meanwhile, he also worked tiresomely in steel mills to support himself during his entire educational tenure. This unique occupation would set the foundation for Serra’s prosperous sculptural career.

In 1964, Serra secured a Yale Travelling Fellowship to study abroad in Paris for one year. By keeping in touch with his classmates from home, he also encountered an easy introduction to the city’s contemporary sphere. His future wife Nancy Graves had introduced him to composer Phil Glass, who spent time with conductor Nadia Boulanger. Together, the group frequented Paris’s legendary intellectual watering hole, La Coupole, where Serra first met Swiss sculptor Alberto Giacometti. He soon discovered an even worthier source of influence. At the National Museum of Modern Art, Serra spent hours sketching rough ideas inside late sculptor Constantin Brancusi’s reconstructed studio. He also took prolific life drawing classes at Académie de la Grande Chaumière, however, few relics prevail from this time period. Surrounded by new media, the artist awakened creatively in Paris, learning firsthand how elegantly a sculpture can dictate physical space.

A Fulbright Scholarship took Richard Serra to Florence in 1965. In Italy, he vowed to completely abandon painting, instead turning his attention toward sculpting full-time. Serra traces his exact transformation to when he visited Spain, stumbling upon Golden Age master Diego Velazquez and his iconic Las Meninas. From then on, he resolved to avoid complex symbolism, concerned with materiality, and less so with two-dimensional illusions. His subsequent creations referred to as “assemblages,” comprised wood, live animals, and taxidermy, juxtaposed to elicit extreme emotional reactions. And Serra did precisely that when he exhibited these caged provocations during his first-ever solo-show at Rome gallery La Salita in 1966. Not only did Time pen a scathing review on the horrid debacle, but public outrage from local Italian artists also proved too much for Rome to bear. Local police shut down La Salita quicker than Richard Serra caused his highly publicized commotion.

When He Moved Back To The U.S.

New York met Richard Serra with more enthusiasm later that year. Settling in Manhattan, he quickly warmed up to the city’s avant-garde scene, then dominated by Minimalists who legitimized sculpture as inherently valuable, regardless of its ability to articulate one’s inner woes. In fact, forerunner Robert Morris even invited Serra to participate in a Minimalist group show at The Leo Castelli Gallery; and he propped his work alongside influential voices like Donald Judd and Dan Flavin. What the artist lacked in commensurate glitz he made up for in swashbuckling grit, however. As Serra said himself, his work fundamentally differed from his peers because he wanted to “get down and dirty.” To stand out from the crowd, he subsequently coined a now-legendary litany of intransitive verbs titled Verblist, scrawled with manual actions like “to split,” “to roll,” and “to hook.” This Process Art precursor would also serve as a simple blueprint for Serra’s lucrative career to come.

To test his experimental philosophy, Serra turned to eclectic materials like lead, fiberglass, and rubber. His multimedia milieu had also profoundly affected his view of sculpture, particularly its propensity to push viewers beyond a painting’s visual confines. Between 1968 and 1970, Serra created a new sculpture series, Splash, by pouring molten lead over a corner where his wall and floor collided. Eventually, his “gutters” caught casting devotee Jasper Johns’s attention, who then asked him to recreate his series at John’s Houston Street studio. That same year, Serra also unveiled his famous One Ton Prop, a four-plated lead and alloy structure stacked to resemble an unstable house of cards. “Even though it seemed it might collapse, it was in fact freestanding. You could see through it, look into it, walk around it,” Richard Serra commented on his intended geometric product. “There’s no getting around it. This is a sculpture.”

Richard Serra reached maturity during the 1970s. His first methodological divergence traces back to when he assisted Robert Smithsonian with Spiral Jetty (1970), a swirl constructed from six thousand tons of black rocks. Moving forward, Serra contemplated sculpture as related to site-specificity, pondering how physical space intersects with medium and movement. Provoking a sense of gravity, vitality, and mass, his 1972 sculpture Shift best demonstrates this deviation toward large-scale, outdoor works. Yet most of these early archetypes weren’t created within the U.S. In Canada, Serra installed six concrete slabs throughout art collector Roger Davidson’s farm to accentuate its rugged landscape’s contours and zigzags. Then, in 1973, he installed his asymmetric sculpture Spin Out at the Kroller-Muller Museum in the Netherlands. The steel-plate-trio forced passersby to pause, reflect, and relocate in order to perceive it correctly. From Germany to Pittsburgh, Richard Serra rounded his decade enjoying considerable success around the world.

But controversy beset him in the 1980s. After enjoying a positive reception across the U.S., Serra stirred an uproar in his Manhattan stomping grounds in 1981. Commissioned as part of a U.S. General Services “Art-in-Architecture” initiative, he installed a 12-foot-tall, 15-ton, steel sculpture, Tilted Arc, dissecting New York’s Federal Plaza into two alternate halves. Rather than focus on optical distance, Serra sought to completely alter how pedestrians navigated the plaza, forcibly eliminating inertia to impel activity. Public outcry immediately shunned the intrusion on an already hectic morning commute, however, demanding the sculpture’s removal before Serra even completed construction. Tilted Arc’s international scrutiny inevitably pressured the Manhattan municipal government to hold public hearings deciding its fate in 1985. Richard Serra aplombly testified to the sculpture’s eternal intertwinement with its surroundings, proclaiming his most famous quote to-date: to remove the work is to destroy it.

Unfortunately, not even a compelling axiom could sway New Yorkers out for blood. Despite Serra suing the U.S. General Services, copyright law determined Tilted Arc belonged to the government and thus should be handled accordingly. Warehouse workers consequently dismantled his notorious slab in 1989 to haul into out-of-state storage, never to resurface again. Serra’s debacle nonetheless raised larger questions within public art’s critical discourse, mainly that of viewer participation. Who is the audience for an outdoor sculpture? Critics believed pieces manufactured for public plazas, municipal parks, and memorial sites should assume responsibility to enhance a given community, not interrupt it. Supporters maintained an artwork’s duty to be bold and unapologetic. While reconsidering his audience’s socioeconomic, educational, and ethnic variations, Serra emerged from the incident with a clearer notion of exactly who he should create art for. He then set off to distinguish his new repertoire throughout the following decades.

Building on momentum from his well-received ellipses, Serra’s invigorated instincts shaped his practice during the 2000s. He began his decade with a spin-off series Torqued Spirals, inaugurated through a rolled-steel elliptical sculpture dedicated to Joseph Pulitzer. Contrasting happy blue skies with his medium’s moody color palette, Joe (2000) encapsulated an autonomous realm within the Pulitzer Art Foundation, exposed to the ebb and flow of everyday life. In 2005, Serra returned to his native San Francisco to install his very first public sculpture in the city, Ballast. That same year, Guggenheim Bilbao also commemorated The Matter Of Time, a permanent exhibition showcasing Serra’s seven ellipses. There, snaking passages invoked a lack of security in vulnerable audiences, betraying logic despite a seemingly stable construction. Since then, he’s also actualized sculptures in Qatar, and celebrated rotating exhibitions at blue-chip galleries like Gagosian. His contemporary career endures today even at 80 years old.

What Is Richard Serra’s Cultural Legacy?

Now, Richard Serra is widely regarded as one of America’s greatest 20th-century sculptors. Artists and architects alike cite him as motivation for continually pushing public installation to the avant-garde forefront, ping-ponging its purpose from institutional to utilitarian. Yet despite critical success, some feminist historians believe Serra’s macho bravado to be a patriarchal prototype of Post-War America. Subsequent modernist trailblazers, like Judy Chicago, rejected these masculine ideals as obsolete, repositioning sculpture to seem impressive notwithstanding its use of grand materials. Despite pushback from generations following, Serra’s seminal showpieces remain difficult to ignore, a direct, palpable byproduct of his mighty artistic presence. Viewers worldwide wander these meditative sanctuaries every day in hopes of understanding his complex genius once more, recollecting our corporeality with refreshed insight each instance. Richard Serra towers like a tantalizing testament to art as a societal function, sublime yet never fully static, forever evoking the extraordinary.

By Christina EliaBA Art HistoryChristina Elia is a contributing writer whose work focuses on the intersection between visual culture and language. She was born and raised in New York City, where she currently writes about topics ranging from creative nonfiction to street art, culture, and travel. Christina’s work has been published in online publications such as The Odyssey, Select City, CURA, and has appeared in print in The Tishman Review and UP.

Donald Judd Retrospective at the MoMA