HomeAnswersWhat Is the Difference Between Art Nouveau and Art Deco?

What Is the Difference Between Art Nouveau and Art Deco? 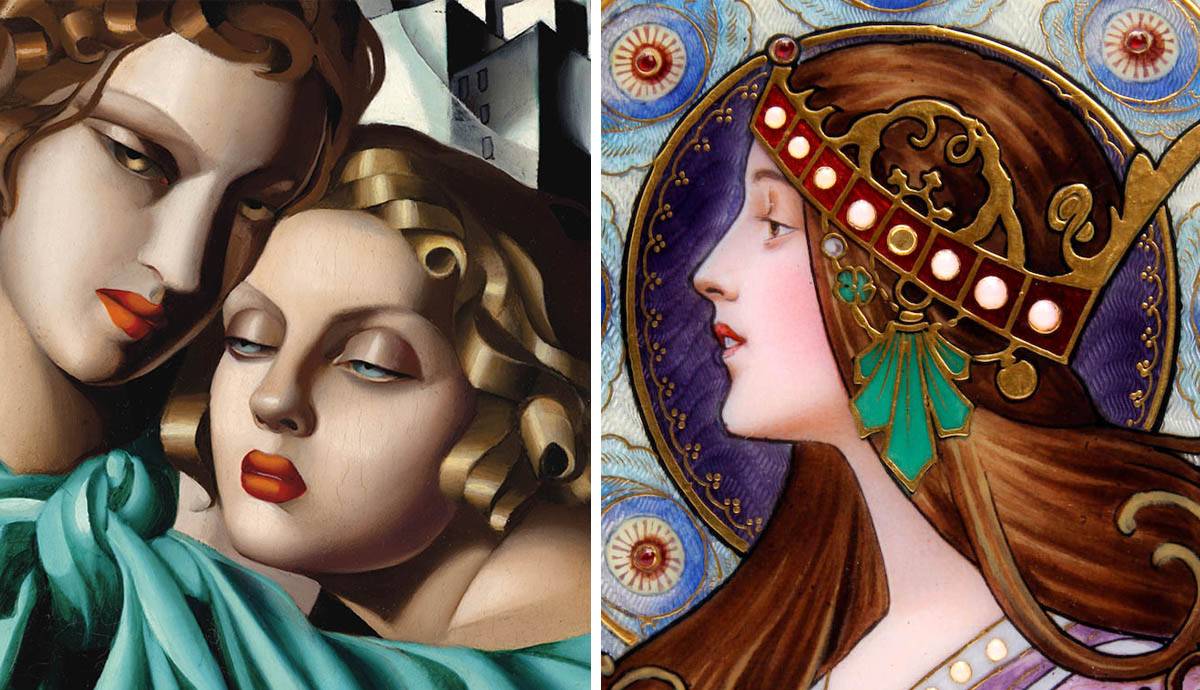 Art Nouveau and Art Deco are two revolutionary art and design movements that took hold during the late 19th and early 20th century. Beyond their similar sounding name, they share many parallels; both movements came from Europe, and each responded in their own ways to the industrial revolution. They both also rose from relatively humble beginnings, eventually spreading throughout the entire world and forever changing the cultural landscape. Both movements also saw the arts as indivisible, and their styles spread across a huge array of different disciplines, from book illustration and painting to architecture, stained glass and jewellery. Because of these overlaps, it can be easy to confuse the two styles. So, with that in mind, let’s look through the main differences that help us clearly distinguish between Art Nouveau and Art Deco.

We can recognise the Art Nouveau style by its ornately organic, flowing shapes and forms. These are usually elongated and exaggerated to heighten their dramatic impact. Nature was a definitive source of inspiration, with many designers imitating the curves and lines of plant and flower forms. Seamlessness and continuity were important Art Nouveau concepts drawn from nature, reflecting Art Nouveau’s wider desire to seamlessly connect all forms of visual and applied arts.

The Whiplash Curl Is a Trademark Art Nouveau Feature

The ‘whiplash’ curl is the number one defining feature of Art Nouveau, and we see it appearing time and time again in the movement’s most famous works of art and design. It is an ornamental ‘S’ shape that suggests sinuous dynamism, and its bold, confident shape marked a radical departure from the conventions of the past.  In fact, it became a symbol for artistic freedom, echoing the liberating spirit of the Art Nouveau movement. Look, for example at late 19th century English artist and illustrator Aubrey Beardley’s ground-breaking illustrations, with their swirling s-shapes, or French architect and designer Hector Guimard’s famous gates for the gates leading into the Paris Metro, designed in 1900.

Art Deco Is Angular and Streamlined

In contrast with Art Nouveau’s decadently flowing lines, Art Deco is typified by an entirely different aesthetic – one of angular shapes and high-polish surfaces. Inspired by technology, it echoed the language of industry, with vertical lines, zig-zags and rectilinear shapes. Art Deco also made use of the latest in high-tech materials, such as stainless steel, aluminium and glass, often polished to a high sheen to emphasise an entirely modern look. Interestingly, Art Deco also looked to much older references, particularly the faceted architecture of Babylon, Assyria, Ancient Egypt, and Aztec Mexico.

Some of the most outstanding examples of Art Deco design can be found in New York City. These include the stunning Chrysler Building, designed by architect William Van Alen, with its polished stainless-steel spire that became an emblem of modernity. The Empire State Building, designed by Shreve, Lamb & Harmon is another emblem of the Art Deco era, built in 1931, with bold, angular shapes and a streamlined simplicity that filled the city of New York with hope and optimism for the post-war future.

Although they are now both recognised as international style trends, Art Nouveau and Art Deco each have roots in different locations. The beginning of Art Nouveau is often traced back to rural England, and the Arts and Crafts movement that placed an emphasis on plant forms and traditional craftsmanship. It later spread into Austria, before spreading across Europe and reaching the United States. Art Deco, by contrast, was founded by Hector Guimard in Paris, and later spread across Europe and the United States, hitting a high point in the Jazz Age era of 1930s New York.

The timings of each movement were also quite distinct. Art Nouveau came first, lasting roughly from 1880-1914. Art Deco came later, after World War I. This distinction is important politically, because Art Nouveau was all about whimsical romance and escapism in a pre-war society, and after the war it no longer seemed to suit the spirit of the times. Art Deco, instead, was a post-war celebration at the end of conflict, a hard-edged style of modernism for a new era, one that was filled with jazz music, flappers and party fever, as captured in Tamara De Lempicka’s indulgent Art Deco paintings.