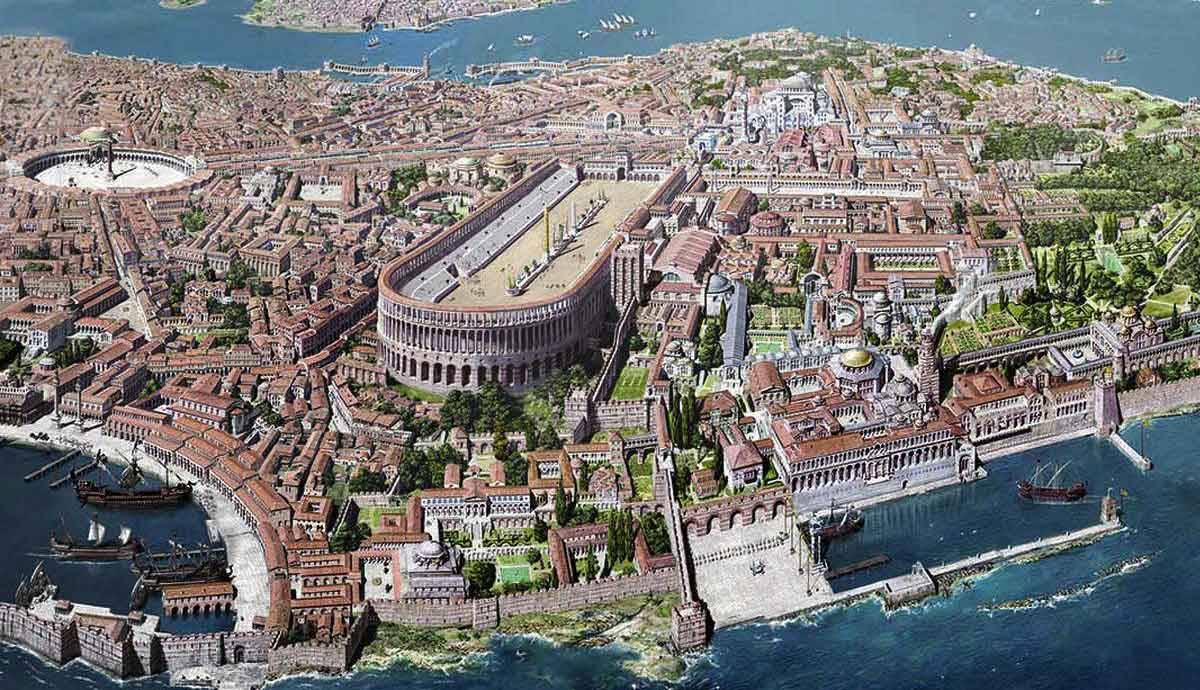 For more than a millennium, Constantinople was the capital of the Roman Empire, better known as the Byzantine Empire. Founded by Emperor Constantine the Great in the fourth century CE, Constantinople soon became a thriving metropolis and one of the largest cities in the world, reaching over half million inhabitants by the sixth century. Although the deadly plague decimated its population, medieval Constantinople remained a city of immense wealth and magnificent architecture.

Thanks to its prime strategic position, and its formidable Theodosian walls, Constantinople was also an impregnable bastion. Throughout its long history, the city endured great fortune and terrible sieges until it finally fell to the Ottoman Turks in 1453. However, even under its new masters, Constantinople remained the imperial capital and retained its importance. Nowadays, the ancient city is known as Istanbul.

The Foundation of Constantinople

After becoming the sole ruler of the Roman Empire, Constantine the Great decided to establish his new capital – Constantinople. The site chosen for Constantine’s “New Rome” was already occupied by a small town of Byzantium. Constantine greatly expanded the ancient site, dividing it into 14 sections and constructing a new land wall. To populate his city, the emperor offered new residents free food rations. Someone had to govern Constantinople’s rapidly growing populace, so emperor Constantine lured wealthy aristocrats, offering lucrative positions at his court and in the newly established Senate.

To embellish his new capital, the emperor transferred monuments and statues from all corners of the Empire and commissioned many new ones. Finally, in 330 CE, Constantinople became the imperial capital, while Rome gradually faded into obscurity, retaining only its symbolic importance.

Constantinople Was Built as the New Imperial Capital

At the moment of its dedication, Constantinople was a huge construction site. The center of the old Byzantion became the city’s main square – Augustaeum. Next to it was the Great Palace, the sprawling palatial complex and the seat of Roman (or Byzantine) emperors. Another important structure was the Hippodrome, a giant arena for chariot races, the Roman favorite pastime. The grand avenue, lined with the colonnades – the Mese – intersected the city, leading to the Forum of Constantine, and several more fora, until reaching the city’s boundary, the Constantinian wall.

Later, after the construction of the massive Theodosian walls in the fifth century, the Mese was extended to the new Golden Gate, the majestic entrance to Constantinople.

Constantinople Was the Center of Christianity

Constantine was not a Christian emperor, but he was the first Roman ruler who promoted this burgeoning religion. A few decades after his death, under Emperor Theodosius the Great, the Roman Empire became the Christian Empire. Unsurprisingly, Constantinople became the Christian capital, a city filled with domes of Orthodox churches. The great cathedral of Hagia Sophia was rebuilt by Emperor Justinian I in the mid-fifth century following the Nika riots, and the great fire that devastated most of the city. Lavishly decorated with golden mosaics, marble floors, and porphyry columns, Justinian’s new cathedral remained the largest domed structure until the Renaissance.

The building was so magnificent that when the emperor entered it for the first time, he exclaimed: “Solomon, I have surpassed thee!” Justinian also oversaw the construction of the Hagia Irene and the Holy Apostles, the imperial mausoleum. In the following centuries, pious Byzantine emperors continued filling the cityscape with domed churches and monasteries, brimming with relics, thus justifying their title of “God’s vicegerents on earth.”

The Impregnable Defenses of Constantinople

Located at the crossroads of East and West, it did not take long for Constantinople to become one of the most important places in the ancient and medieval world. Thanks to its natural harbor – the Golden Horn – Constantinople was a commercial hub, controlling the vital shipping routes and the overland trade as a terminus of the Silk Roads. No wonder many tried (and failed) to conquer the “Queen of the Cities.” Built in the fifth century, under the reign of emperor Theodosius II (thus the name), the mighty Theodosian walls defended the approaches to the city by land.

The unique triple defensive system, composed of open and enclosed spaces, a moat, and outer and inner walls, punctured by a series of well-positioned towers, endured several sieges, keeping the city and the Empire alive. In addition, Constantinople was protected by the Sea Walls, the “wooden wall” – the imperial navy, and by the massive chain that prevented hostile fleet’s entry to the Golden Horn.

The Fall of Constantinople

Only twice in its thousand-year-long history, the invaders managed to take Constantinople. However, the armies of the Fourth Crusade of 1204 entered the city by exploiting the chaos among the defenders, taking the Sea Walls. The famed land ramparts – the Theodosian Walls – were breached only once in its entire history, over a century after their construction – by a new invention on the battlefield – the cannon. After Mehmed II surprised the defenders by transferring the Ottoman fleet by land, bypassing the chain barrier, the sultan ordered the assault on the weakest segment of the Theodosian Walls.

After 52 days of siege, the overwhelming size of the Ottoman forces, and the mighty cannons, breached the walls and crushed the remaining resistance. Finally, on May 29th 1453, Constantinople fell to the Ottomans. The fall signaled the end of the Roman Empire, while the death of emperor Constantine XI marked the end of the long line of Roman emperors. However, Constantinople remained the capital of the new Ottoman Empire and retained its importance as Konstantinye, and later Istanbul.

Arch of Constantine: The Monument With Many Faces