HomeAnswersWhat Was So Shocking About Edouard Manet’s Olympia? 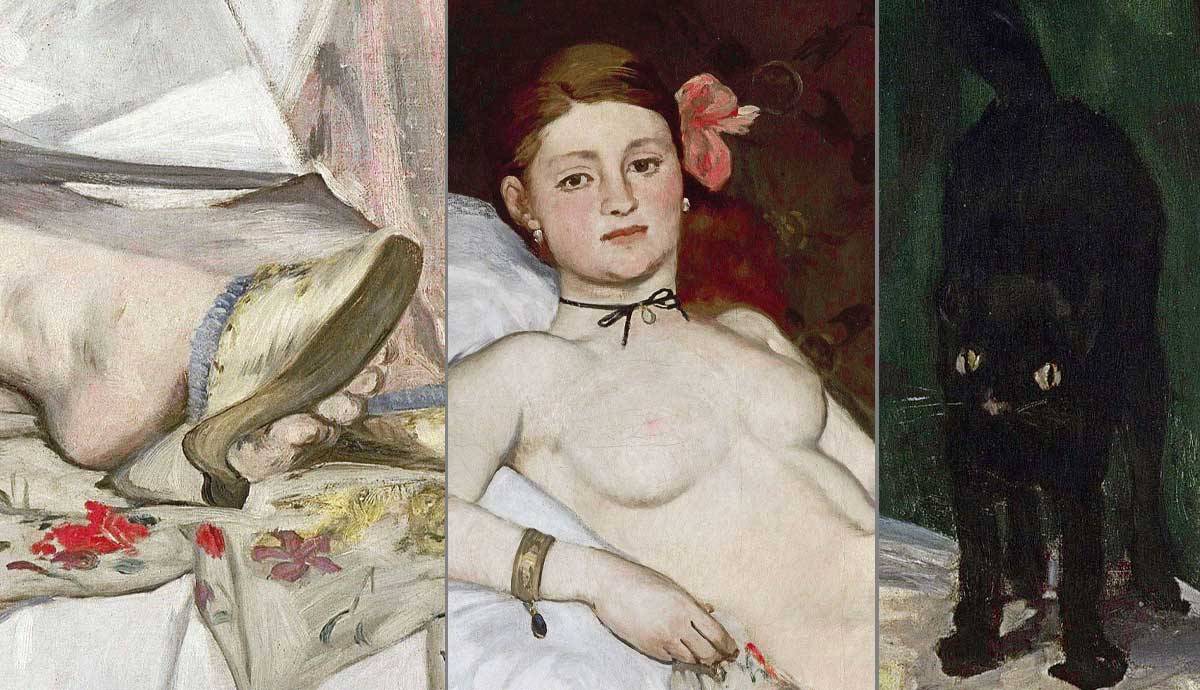 Audiences were horrified when French Realist painter Edouard Manet unveiled his infamous Olympia, 1863, at the Parisian Salon in 1865. But what was it, exactly, that made this artwork such an affront to the Parisian art establishment, and the people who visited it? Manet deliberately broke with artistic convention, painting in a bold, scandalously flagrant new style that signaled the beginning of the modernist era. We look through the main reasons why Manet’s Olympia was such a shock to conservative Paris, and why it is now a timeless icon of art history.

From a quick glance, one might be forgiven for confusing Manet’s Olympia with the more usual paintings that populated the 19th century Parisian Salon. Like the classical history painting favored by the art establishment, Manet also painted a reclining female nude, sprawled out in an interior setting. Manet even borrowed the composition of his Olympia from the layout of Titian’s famous Venus of Urbino, 1538. Titian’s classical, idealized history painting typified the style of art favored by the Salon with its hazy, softly focused world of escapist illusion.

But Manet and his fellow Realists were sick of seeing the same old thing. They wanted art to reflect the truth about modern life, rather than some old-world fantasy. So, Manet’s Olympia made a mockery of Titian’s painting and others like it, by introducing gritty new themes from modern life, and a new style of painting that was flat, stark and direct.

One of the most shocking statements Manet made with his Olympia was the deliberate use of a real-life model, as opposed to a fictional, fantasy female for men to ogle over, as seen in Titian’s Venus. Manet’s model was Victorine Meurent, a muse and artist who frequented the Parisian art circles. She modelled for several of Manet’s paintings, including a bullfighter scene and that other shocking painting titled Dejeuner Sur l’Herbe, 1862-3.

3. She Looked Out with a Confrontational Gaze

Not only was Manet’s model a real-life woman, but her body language and gaze were completely different from the art of earlier generations. Rather than looking out at the viewer with a coy, demure facial expression, (like Titian’s Venus) Olympia is confident and assertive, meeting the eyes of the audience as if to say, “I am not an object.” Olympia sits in a more upright position than was customary for historical nudes, and this added to the model’s air of self-confidence.

4. She Was Clearly a ‘Working Girl’

While the woman who modelled for Manet’s Olympia was a well-known artist and model, Manet deliberately posed her in this painting to look like a ‘demi-mondaine’, or high-class working girl. Manet makes this blatantly clear by highlighting the model’s nudity, and the fact that she lies sprawled out across a bed. The arched black cat in the right was a recognized symbol of sexual promiscuity, while Olympia’s servant in the background is clearly bringing her a bouquet of flowers from a client.

Women working as ‘demi-mondaines’ were rife across 19th century Paris, but they performed a secret practice that no one talked about, and extremely rare for an artist to represent it in such a flagrantly direct way. It was this that made Parisian audiences gasp with horror when they saw Manet’s Olympia hanging on the wall of the Salon for everyone to see.

5. Manet’s Olympia Was Painted in an Abstract Way

It wasn’t just Manet’s subject matter that made Olympia such a radical work of art. Manet also bucked the trend for a softly focused, romanticized finish, painting instead with stark flat shapes and a high contrast color scheme. Both were qualities he admired in the Japanese prints that were flooding the European market. But when combined with such confrontational subject matter, this made Manet’s painting even more outrageous and shocking to look at. Despite its notoriety, the French Government bought Manet’s Olympia in 1890, and it now hangs in the Musee d’Orsay in Paris.

What Are the Differences Between Realism and Impressionism?