HomeAnswersWhat Are the Differences Between Realism and Impressionism?

What Are the Differences Between Realism and Impressionism? 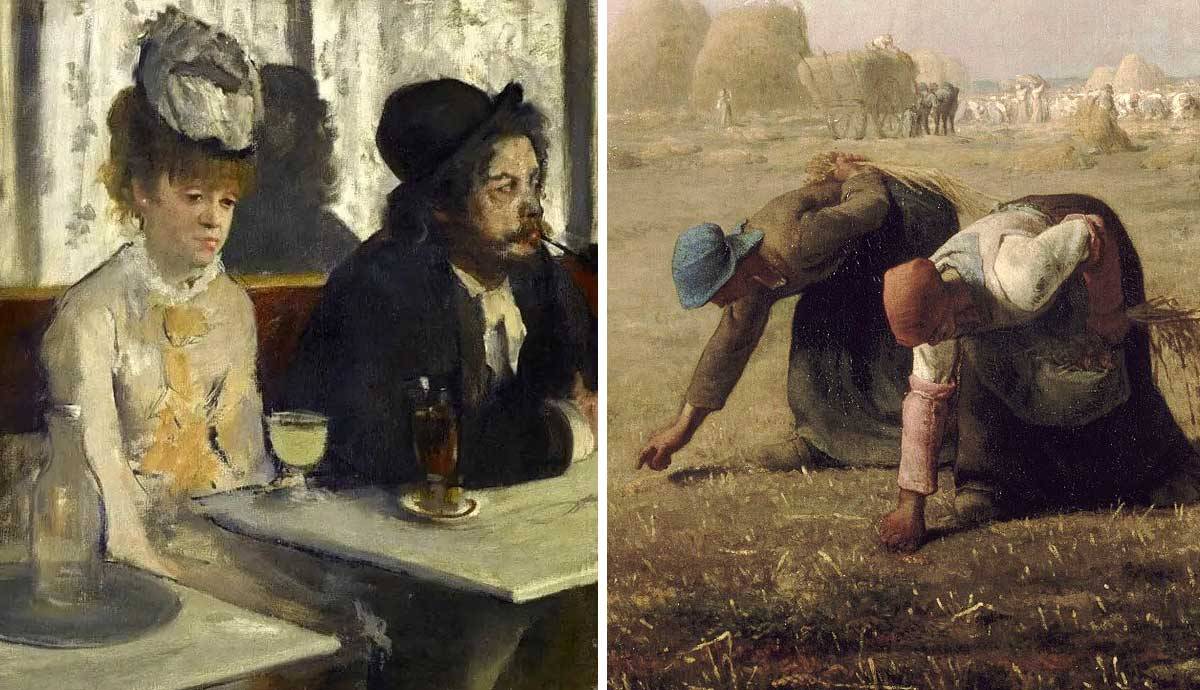 Realism and Impressionism were both radical art movements that emerged out of 19th century Paris. In both movements, artists depicted ordinary, modern life, and both signaled the birth of modernism. As with many historically overlapping art movements, there are also stylistic similarities between them. So, what exactly are the core differences between Realism and Impressionism? Let’s take a closer look at the fundamental concepts that set one apart from the other.

Of the two art movements, Realism emerged first, around the early to mid-19th century in Paris. Realist painters including Gustave Courbet, Jean-Francois Millet and Edouard Manet rejected the idealizing trends of earlier Romanticism, choosing instead to focus on the gritty reality of normal life. So, instead of seeing young nymphs frolicking by a stream, in Realist art we see humble, ordinary subjects such as people working in fields and quarries, or a bunch of mourners standing around at a grim family funeral – as seen in Courbet’s masterwork Burial at Ornans, 1851. There was no sugar coating in Realist art – just the cold, hard truth of the real world.

2. Impressionism Grew Out of Realism

In many ways, Realism laid the foundation for Impressionism. Like the Realists, the Impressionists painted scenes from normal, everyday life, as opposed to some fictional or mythological fantasy. Thus, both movements connected art with real life, making it much more accessible to a wider audience, and ushering in the modernist way of thinking about art. We can see the influence of Realism on the Impressionist painter Edgar Degas, who, although working in an airy, Impressionist style, often painted normal people in ordinary, everyday settings, as seen in his iconic L’Absinthe, 1875-76.

3. Realism Was Dark and Gritty

4. Impressionism Was Light and Airy

Impressionists generally painted lighter, more frivolous subjects, celebrating outdoor leisure pursuits, café culture, the theatre and busy street life. Landscapes and gardens were also popular. The Impressionists took inspiration from the Naturalists and the Barbizon School, painting spontaneously en plein air, or directly from life, to capture the fleeting sensations of light and weather. Women impressionist painters were largely forbidden from wandering public places alone, meaning they spent much of their lives confined to the home. But their paintings offer insight into the quiet, tranquil moments of pleasure that make up normal life, painted with fresh, bright colors, as seen in Mary Cassatt’s tender painting The Child’s Bath, 1893.

5. Realists and Impressionists Painted Differently From One Another

Realists generally painted in a highly detailed style, to emphasize the cold truth of the subjects they depicted. By contrast, Impressionists adopted a highly stylized way of working, with light, feathered brushstrokes that seem to ripple like passages of light. This method meant the Impressionists could work quickly while painting directly from life, in order to capture the essence of a moment in time before it disappears forever.

Realist paintings can be recognized for their distinctive palette of warm, dark and earthy tones, including black, brown, dark green and beige. These colors matched the true shades of nature, and reflected the Realists’ somber, serious subject matter. Meanwhile, the Impressionists rejected darker hues, and many banned black completely from their painting palette. Instead, they worked with pale, luminous and pastel shades, as can be seen in Claude Monet’s sparkling depictions of his water garden at Giverny.