Here are 10 female impressionist artists who rivalled their male counterparts with radical and ground-breaking works of art. 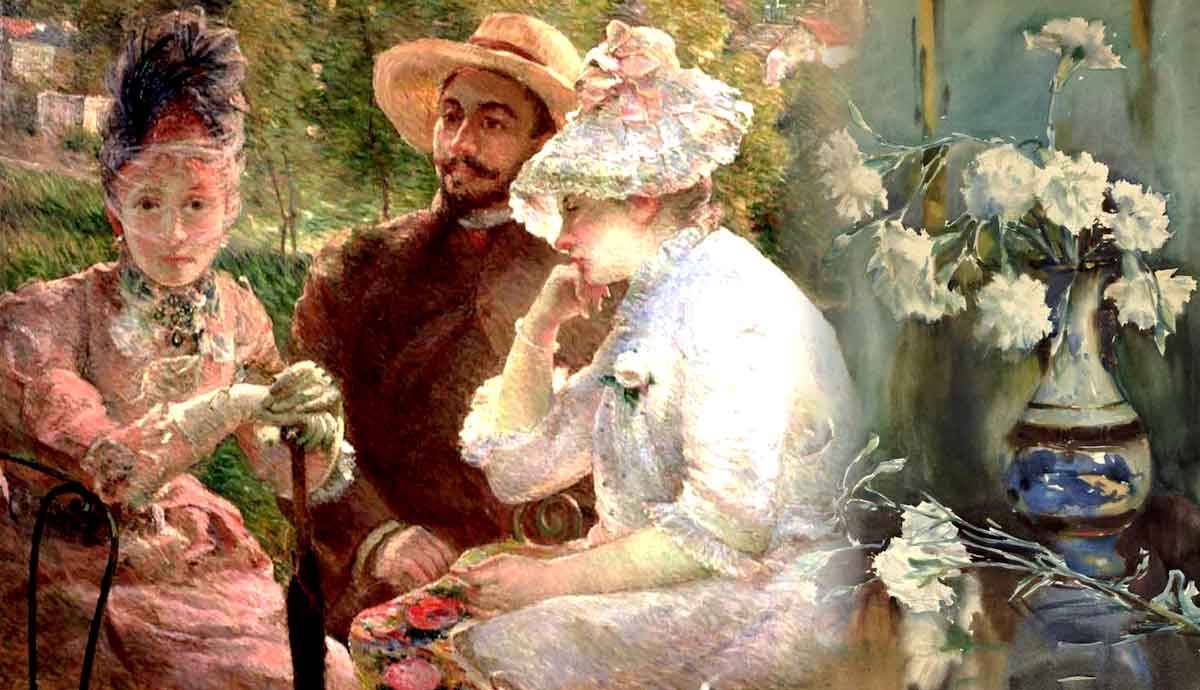 Impressionism is often associated with artists like Claude Monet and Edgar Degas. Their female counterparts, however, are rarely mentioned. Some of them, like Berthe Morisot and Mary Cassatt, are better-known than others like Anna Ancher or Laura Muntz Lyall. Despite the fact that many female impressionist artists created remarkable works, they still get less coverage than male impressionists. Many of them studied in Paris and befriended famous male artists. They were influenced by their works but they often developed their own style. Here are 10 iconic female impressionist artists you must know.

The French painter Berthe Morisot was born in 1841. As the granddaughter of famous Rococo painter Jean-Honoré Fragonard, Berthe Morisot probably had artistic talent in her blood. She took her career as an artist very seriously and at the age of 23, she exhibited her works at the Salon. She met Édouard Manet in 1868 and they became close friends. They both influenced each other. Morisot inspired him to try outdoor painting. She married Manet’s younger brother Eugène in 1874.

Her work often shows moments from the private sphere of the home. Family members like the artist’s sister Edma were often depicted in Morisot’s work. Her delicate use of colors is one of Morisot’s trademarks. The work of Impressionist artists was harshly criticized at the time and Morisot was no exception. She did however sell more works than her male colleagues like Claude Monet, Pierre-Auguste Renoir, and Alfred Sisley.

Mary Cassatt was an American painter and printmaker born in 1844 in Allegheny City, which is now a part of Pittsburgh. Like Morisot, Cassatt concentrated on depictions of private life, especially those showing women caring for their children.

When she was a child, Cassatt lived in Europe for five years. She had a private art tutor and attended the Pennsylvania Academy of the Fine Arts from 1861 to 1865. She traveled to Europe in 1866 and studied with artists like Jean-Léon Gérôme and Thomas Couture. In 1872, she had her first important exhibition at the Salon. Two years after that, she moved to Paris permanently. She was inspired by Gustave Courbet and Edgar Degas, who was a friend of hers.

In the early phases of her artistic career, Cassatt would often portray women coming from the middle and upper class. Her work On a Balcony shows a modern woman reading the newspaper rather than a novel. This points to the fact that even though the woman is shown in a private setting, she still catches up with the contemporary world happening outside of her home.

The French artist Marie Bracquemond was born in 1840. She first started painting as a child and was mostly a self-taught artist. Bracquemond wanted to make a birthday present for her mother and used pigments she extracted from flowers to do so. This creative attempt impressed a member of her family, so they bought her a box of watercolors. Unfortunately, her husband did not approve of her career as an Impressionist artist or the art movement in general. Bracquemond’s works were a part of three Impressionist exhibitions, but unfortunately, the artist stopped painting in 1890 due to her husband’s objections.

Eva Gonzalès was born in Paris in 1849. She came from an artistic family. Her father was a writer, and her mother was a musician. Gonzalès started taking art lessons when she was 16. A few years later, she got to know Édouard Manet and she became his student and model. In 1870, she exhibited her works at the Paris Salon. Her art was sometimes criticized for being too similar to Manet’s work.

Eva Gonzalès’ work was featured in several significant exhibitions, but the artist, unfortunately, died during childbirth when she was only 34. Her family organized a retrospective after her death that included 88 works. Her work The Bouquet of Violets depicts her sister Jeanne who modeled for her and was an artist herself.

Cecilia Beaux was a highly regarded portrait painter. The American artist was born in 1855 in Philadelphia. Just like Eva Gonzalès, Cecilia Beaux took art lessons when she was 16. She opened a studio in Philadelphia in 1883 and her work Last Days of Infancy was included at the Paris Salon in 1886. She traveled through Europe and studied at the Académie Julian in Paris. When she came back to Philadelphia, she was considered one of the finest portrait painters in the city.

Beaux became the first female instructor at the Pennsylvania Academy of Fine Arts. The style of the French Impressionist artists influenced her work, but Beaux maintained a unique way of expression. Her success as a portrait painter was exemplified by the commission she received when she was asked to do a portrait of Mrs. Theodore Roosevelt. After an injury in 1924, she stopped painting as much.

The American artist Lilla Cabot Perry was born in 1848 in Boston, Massachusetts. Her work was inspired by the innovative style of French impressionist artists. She was a significant representative of the style in the US. The artist had three daughters with a literature professor called Thomas Sergeant Perry. Their daughters were often depicted in Lilla Cabot Perry‘s art.

Claude Monet had a significant influence on her works. Her family usually spent their summers near Monet’s home in Giverny, France. Monet became her friend and her teacher. Perry gave lectures and wrote essays on French Impressionist artists.

The artist also lived in Tokyo from 1893 to 1901. Her stay had an immense impact on her art as she painted more than 80 works inspired by Japanese motifs. The influence is also visible in her work Lady with a Bowl of Violets. She created the work upon her return from Tokyo. In the background of the painting, you can see a part of a Japanese woodblock print. Similar to traditional Japanese art, Lilla Cabot Perry cut off the print and the flower arrangement next to it.

Louise-Cathérine Breslau was born in 1856 in Munich, Germany. She suffered from acute asthma and had to spend a lot of time in bed. She was therefore homeschooled by a private tutor. She later attended a convent where she developed an interest in art. Her mother sent her to a private art school in Zurich. Since at the time it was not really possible for a woman to further pursue an art education in Switzerland, Louise-Cathérine Breslau had to leave the country. She went to Paris to study at the Académie Julian. She was an ambitious student dedicated to having a career as an artist. Just two years after studying art, one of her works was accepted by the Paris Salon. Over the next few years, many of her paintings were shown at the prestigious Salon.

The Danish artist Anna Ancher was born in 1859 in Skagen. She was the only member of the artist colony Skagen Painters born in Skagen. Since women were not allowed to attend the Royal Danish Academy of Fine Arts in Copenhagen, Ancher went to a private school in Copenhagen. The artist continued to paint after her daughter Helga was born, which was not often the case at the time. She was part of the Scandinavian modern breakthrough movement, which aimed to depict reality truthfully instead of idealizing the subject. Like many Impressionist artists, Ancher tried to portray the changing nature of light.

She originally wanted to be a teacher, but due to her interest in art, she started to take painting lessons. After that, she went to Paris to study at the Académie Colarossi. During her time in France, she was influenced by the work of Impressionist artists. Laura Muntz Lyall returned to Canada and established a studio in Toronto. She became an Associate of the Royal College of Art and was the first woman artist to gain international popularity outside of Canada. Her works were shown at exhibitions in Chicago and Paris.

10. Nadežda Petrović: One of Serbia’s Most Famous Impressionist Artists

The Serbian painter, critic, and exhibition organizer Nadežda Petrović was born in 1873. Her father was a drawing teacher who exposed her to painting lessons early in life. She went to Munich in 1898 to study in a school led by Anton Ažbé. The school was attended by several Serbian as well as international artists like Wassily Kandinsky, Alexej von Jawlensky, Antonín Hudeček, Edward Okun, Hans Hofmann, David Burliuk, Herman Lipot, and Sándor Ziﬀer. She later studied under Julius Exter. His plein air practice influenced Nadežda Petrović’s early work. Petrović wanted to find a style inspired by her native countryside. Her depictions of the Šumadija region show this tendency. During the Balkan Wars and the First World War, Nadežda Petrović volunteered as a nurse. She contracted typhus and cholera during the Balkan Wars and eventually died from typhus in 1915.