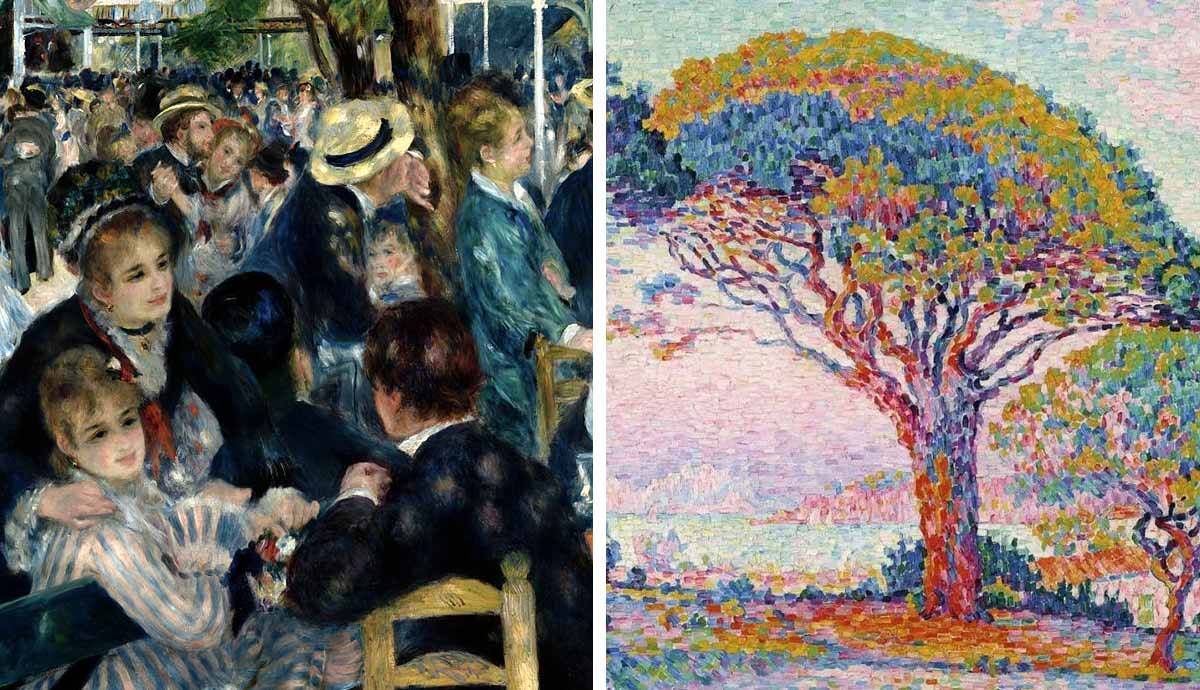 Impressionism and Neo-Impressionism were both important late 19th century art movements which shared many similarities, and there are some overlaps between them. Yet there are a series of distinct differences between the two movements, which are easy to spot once you know how. The Impressionists were a much larger and more widespread school, which eventually spread throughout much of the Western world. Meanwhile, the Neo-Impressionists were a small core group of French artists who came slightly later. They emulated one another’s ideas, and are sometimes called Pointillists, or Divisionists, for their showered dots, points, or tiny marks. Let’s take a closer look at the key differences between the two art movements.

Impressionism began before Neo-Impressionism. The widespread art movement began in Paris in around 1860, with a group of artists including Claude Monet, Pierre-Auguste Renoir, Alfred Sisley and Camille Pissarro. The group were united in their condemnation of the strict Parisian Salon, which favored classical, mythological styles of art. Banding together, they initially called themselves ‘The Cooperative and Anonymous Association of Painters, Sculptors, and Engravers’. In 1874, a disparaging critic named Louis Leroy first called them “the Impressionists”, after Claude Monet’s painting Impression: Sunrise, 1874, and for their sketchy, loose style of painting, made from swift, dappled brushstrokes. The name stuck, and became forever immortalized.

Neo-Impressionism came a little later, founded in 1886 by the pioneering French painter George Seurat. It was the French art critic Felix Feneon who invented the name Neo-Impressionism in relation to Seurat’s art, which he noticed took Impressionist ideas in a new direction. Feneon noted how Seurat was working with much smaller brushstrokes than the Impressionists, applied to create sprinkled showers of color. Feneon also observed how Seurat also took a more rational and scientific approach to color, as influenced by the pioneering color theorist Eugene Chevreul. Seurat deliberately placed small dots of opposing colors, such as orange and blue, or purple and yellow, next to one another, leaving them to blend in the eye. This ‘splitting’ of color into small, almost pixelated fragments is what prompted some historians to call Seurat and his followers the Divisionists, or the Pointillists.

Impressionism began with a small core group of radical painters in Paris, but by the end of the 19th century their ideas had begun to spread far and wide, reaching across Europe and into the United States. The trademark Impressionist tropes of painting en plein air, and observing intimate scenes from ordinary life became popular and widespread, shaping the development of art history across the Western world.

4. Neo-Impressionism Was a Smaller School

The school of Neo-Impressionism, by contrast, was much smaller, and remained largely inside France. Seurat was the movement’s pioneer, and he worked closely alongside his friend Paul Signac. Seurat’s painting Bathers at Asnieres, 1884, demonstrates his early explorations into the Pointillist, Neo-impressionist style, with tiny dots of contrasting color that are only visible when viewed close-up. Other French artists to adopt the Neo-Impressionist style were Henry Edmond Cross, George Lemmen, Théo van Rysselberghe, Jan Toorop, Maximilen Luce and Albert Dubois-Pillet.

A trademark feature in Impressionist art was the artists’ dedication to working out of doors, or directly from life, painting landscapes, or ordinary, everyday scenes. They worked in this way to try and capture the fleeting effects of nature, light and the weather in paint as swiftly as possible, with loose brushstrokes and pale, luminous colors. Some painted the same subject over and over again in different times of day and through the changing seasons, observing how much this could change what they saw before them. Because they were working outside, the Impressionists often worked on small canvases that were easy to transport. While Alfred Sisley was an Impressionist, his small swipes of color paved the way for the more extreme, ‘dotty’ patterns of the later Neo-impressionists, as we see in his painting, The Lane of Poplars, 1890.

6. Neo-Impressionists Worked in the Studio

The Neo-Impressionists painted similar subjects to the Impressionists, such as landscapes, or people enjoying leisure pursuits. But they largely worked in the studio to produce their final paintings, because they were painted in such a detailed, careful way. In contrast with Impressionist painting, Neo-Impressionist art was often painted on a much larger and more ambitious scale, as seen in Seurat’s masterpiece, A Sunday Afternoon on the Island of La Grande Jatte, 1886.