HomeArtistsClaude Monet and Giverny: The Village that Inspired the Water Lilies

Impressionist Claude Monet moved to Giverny, a village in Normandy, in 1883. There, he created the water lily pond that would inspire his most famous paintings. 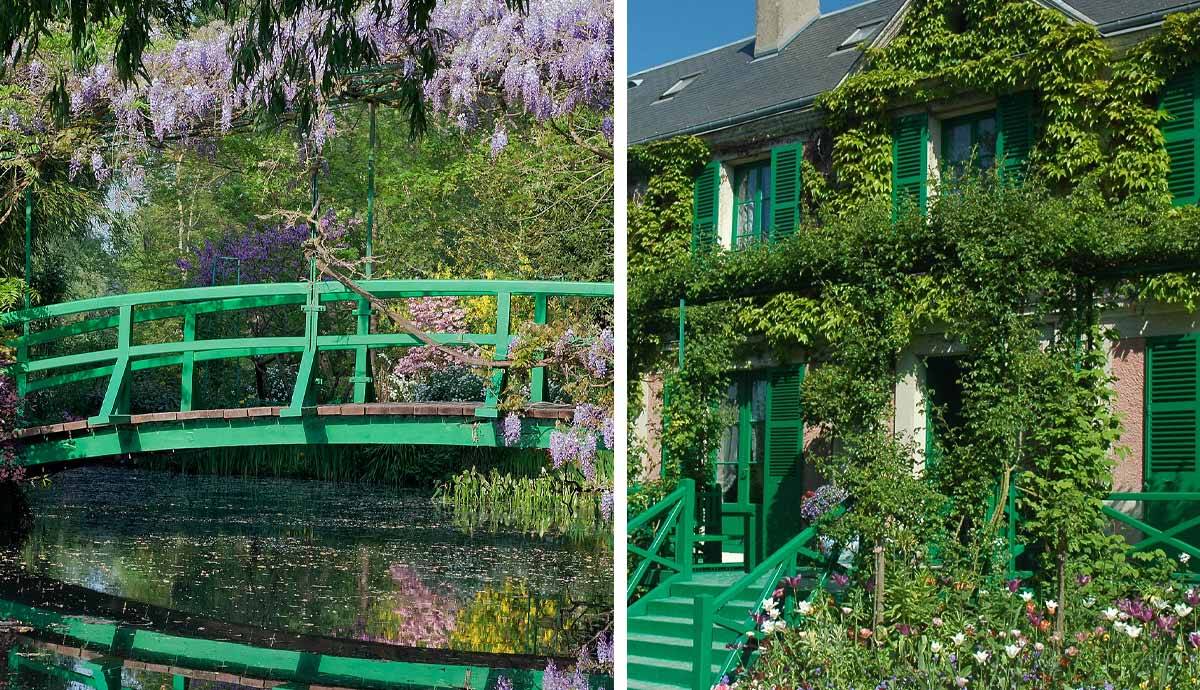 Giverny is a village on the banks of the Seine River in the Normandy region of France, about 40 miles northeast of Paris. It is best known as the place where Impressionist painter Claude Monet had his longtime home, gardens, and studio. Perhaps more importantly, Monet memorialized Giverny in numerous paintings, making it known to people all over the world. Most famous of all is Monet’s artificial pond. Filled with water lilies and covered by an elegant Japanese bridge, it appears in many of his most beloved paintings, particularly those created at the end of his life.

Giverny is located at the meeting place of the Seine River and its tributary, the Epte River. It was a small farming village when Monet settled there in 1883. Monet loved painting rivers, the Seine in particular. He may also have been attracted to the area because of the quality of its lighting situation, similar to that in his former haunts like Argenteuil and Vétheuil. Monet moved to Giverny a few years after the death of his first wife, Camille, in 1879. Accompanying him were his lover, Alice Hoschedé, and eight children between the two of them. Monet and Hoschedé would marry in 1892.

At first, Monet and his family rented a pink house with bright green trim; they would purchase the same house in 1890. Almost immediately upon arrival, Monet set his hand to gardening, as he was a lifelong gardening enthusiast. In the landscaping at Giverny, Monet designed the setting in much the same way he composed a painting, by manipulating the colors, light, shade, and sightlines. For example, Monet created a wide walkway to the front door by cutting down existing trees, lining it with various plants, and installing a row of green metal arches overhead for plants to grow along. It seems that Monet planned his gardens both for his enjoyment and to create subject matter for his paintings.

Claude Monet and His Gardens

Monet’s house at Giverny has two main gardens, a flower garden, and the iconic water lily pond. Monet and his family started the flower garden immediately, but he did not begin the more famous water lily pond until 1893. To create it, he had to receive permission to divert some water from the nearby river. He required permission once again to enlarge the pond a few years later. The water garden idea, especially the iconic, wisteria-draped Japanese bridge, may have been inspired by Monet’s interest in Japanese prints. He collected works by artists like Hokusai and Hiroshige, as well as paintings by his fellow Impressionists.

Monet purchased all his water plants from the Latour-Marliac nursery. Its founder, Joseph Bory Latour-Marliac, had recently created a new hybrid variety of colorful water lilies and introduced them at the 1889 Paris World’s Fair. Previously, Europeans only had white water lilies. Their vibrant pinks, yellows, and red make Monet’s paintings so striking; in turn, his paintings of them helped to popularize the new variety of the plant. Latour-Marliac nursery is still in business today, and surviving receipts make it possible to track which varieties, colors, and quantities Monet ordered in which years. For example, we know that his first order in 1894 included a large number of lotus plants, but he didn’t keep them around for long. In the past few years, the Foundation Claude Monet has worked with the Latour-Marliac nursery to bring the Giverny water lily pond back closer to the way it appeared during Monet’s lifetime. Because water plants are rather high maintenance, Monet employed eight gardeners to help him at Giverny. In addition to the water plants, Monet’s gardens included many Japanese and other exotic plants.

Monet lived in Giverny for more than half his prolific career. Accordingly, there is no identifiable Giverny style, as his art changed and developed during that time. He painted many subjects found at Giverny and the surrounding area, including poppy fields, his two gardens, and scenes on the Seine. To paint on the river, he used a specially fitted-out floating studio boat. However, Monet also traveled extensively during his residency at Giverny, continuing a pattern he had established earlier in his career. It was not until the end of his life, due to old age and the difficulties of failing eyesight and cataract surgeries, that Monet painted primarily near home.

Monet is known for working in series, depicting the same motif over and over in changing conditions of weather, season, time of day, etc. This practice reflected his interest in portraying the passage of time as an aspect of reality. In fact, his first series, depicting haystacks, was painted in the fields near Giverny. Monet would usually work on more than one canvas at a time, painting quickly and then switching from one painting to the next as conditions changed hourly.

Claude Monet is most famous for his water lilies – the several hundred paintings he made of his water lily garden in Giverny. Monet termed these paintings paysages d’eau, which means: water landscapes. Some of these works show the pond, the bridge, and the surrounding weeping willows in varying compositional arrangements. Others, however, became more and more abstracted. By cropping out the bridge, background, and horizon in favor of increasingly close-up views of the water surface, Monet eliminated nearly all depth and perspective. Like all the Impressionists, Monet was fascinated by the science of optics.

Accordingly, he was particularly interested in painting scenes involving water, which acted as a mirror to reflect his motif back at him. In many of Monet’s water lilies paintings, it can be difficult to differentiate the plants from reflections of the sky, clouds, water lilies, and other plants. They also explore how colors appear and change when reflected. Monet’s water lily paintings, particularly the late ones, were his most experimental works, and the Abstract Expressionist painters loved them for it.

The culmination of this process was the series of massive water lilies paintings, called the Nymphéas, installed at the Musée de l’Orangerie in Paris. Monet painted them in the final decades of his life when he remained at Giverny and focused exclusively on water lily imagery. He first considered the idea of panoramic, decorative water lily paintings to fill an entire round room in the 1890s. The Orangerie paintings actually fill multiple round rooms. He began work on the project during World War One and promised the then-incomplete paintings to the French nation just after the Armistice in 1918. However, installation occurred in 1927, the year after his death. Lots of careful planning went into the combined effect of these panels together, which add up to 328 linear feet. French modernist painter André Masson once called Monet’s Orangerie installation the Sistine Chapel of Impressionism.

Monet gave twenty-two of his water lily panoramas to the French nation, but he had also made several others in the same strongly horizontal format. Three other paintings once intended for the Paris installation now live in the Cleveland Museum of Art, St. Louis Museum of Art, and Nelson-Atkins Museum. When lined up together, these three works display one continuous composition. Another water lily triptych is at the Museum of Modern Art in New York, and similar works hang in the National Gallery of London and elsewhere. Some of these other water lily panoramas, in fact, are even more abstracted than those on display in Paris. The Paris works include numerous trees and plants to segment the composition, while examples like those in New York and London show uninterrupted water lilies and reflections all melding together on the water surface.

Monet had to build a special studio on his Giverny property to work on these paintings since they would have been too cumbersome to entirely paint outdoors. In fact, he had a succession of studios at Giverny, three in total. Initially, the first studio merely served as a place for him and others to contemplate his finished works; later, he would retreat there to finish paintings. No longer sticking to the strict en plein air practice that he and his fellow Impressionists are known for, he eventually became willing to complete and touch up works indoors.

Monet would live at Giverny until his death in 1926. His long residency there made the village a sort of pilgrimage destination for artists, art lovers, and tourists. American Impressionists, in particular, made the village of Giverny a sort of artists’ colony, though none actually stayed on Monet’s property. Although he never took on official pupils or apprentices, he did advise the few artists he became friendly with, such as American painter Lilla Cabot Perry. Today, the name Giverny has become synonymous with French Impressionism. Claude Monet’s home, studios, and gardens still exist there today, maintained and opened to the public by the Fondation Claude Monet.