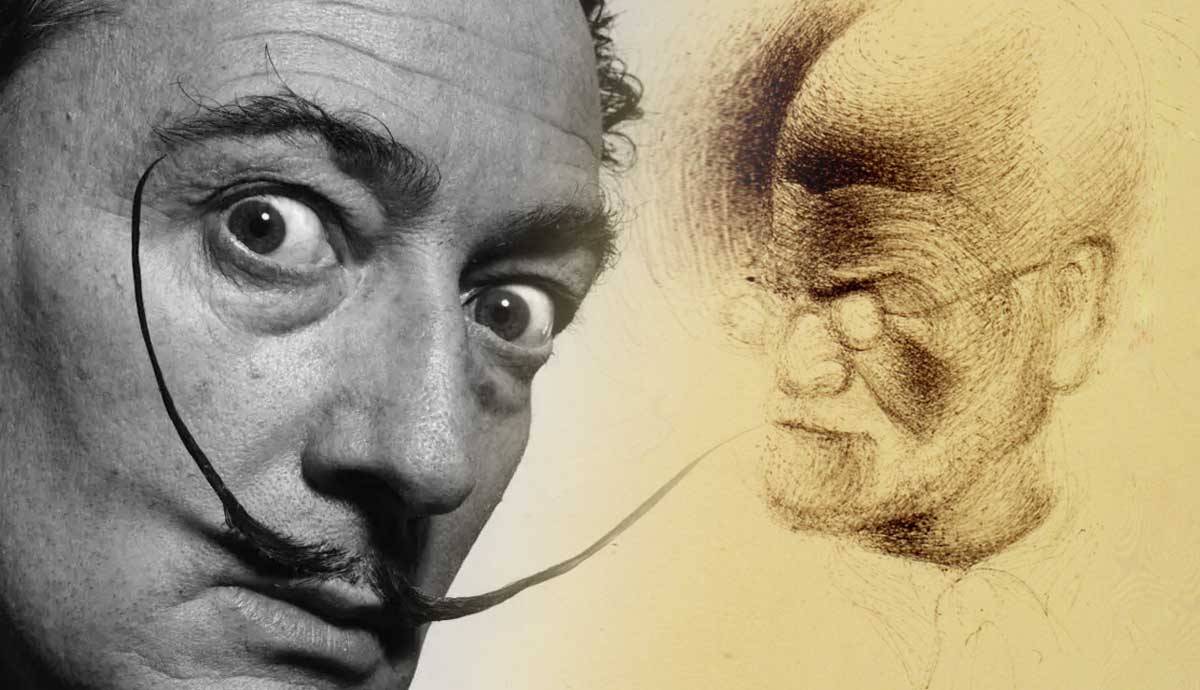 The great Spanish Surrealist artist Salvador Dali had long been an admirer of the psychoanalyst Sigmund Freud. From as early as his student days Dali made extensive research into Freud’s analytical texts on the inner workings of the human mind, dreams, sexuality, and the human subconscious. All this meant Dali had longed for a chance to meet Freud for many years, and in 1938, his dream came true. Dali and Freud met in London for one time only, and their encounter was a bizarre and unexpected experience for both. But what, exactly, happened during this fateful meeting of minds? Keep reading to find out more about this brief but profound moment in history.

Before They Met, Dali Spent Year Fantasizing About It

To say Dali was a fan of Sigmund Freud might be something of an understatement. Since his days as a student in Madrid Dali had spent hours poring over Freud’s psychoanalytic texts. It was Freud’s book The Interpretation of Dreams, 1889, that really fired up Dali’s imagination, and led him to form a deep-rooted fascination with strange, haunting imagery lifted from his own dreams and imaginings. Dali was so obsessed with Freud he even fantasized about meeting him and had imaginary conversations with the psychoanalyst. In one particular daydream, Dali imagined that Freud, “came home with me and stayed all night clinging to the curtains of my room in the Hotel Sacher.”

Prior to their meeting, Dali had unsuccessfully tried several times to meet up with Freud in Vienna. Eventually it was through a mutual friend, the Austrian author Stefan Zweig, that Dali was finally able to meet his hero. Their meeting took place at Freud’s home in London on the 19th of July 1938, where Freud was living in exile to escape Nazi persecution in Austria.

Dali Brought One of His Paintings Along

Dali brought one of his most detailed and intricate paintings – The Metamorphosis of Narcissus, 1937 – to Freud’s home, as an example of his artistic prowess. Although Dali was only 34, and Freud was in his 80s, Dali was already an internationally recognized figure within the Surrealist movement, and he hoped his art and reputation would impress the octogenarian psychoanalyst. Dali also brought along an article he had written on paranoia, hoping Freud would take him seriously as a fellow academic.

Dali Was Disappointed by Their Meeting

Unfortunately, Dali was disappointed by his meeting with Freud, which didn’t go as he had hoped. Perhaps after years of fantasizing about their union, he was bound to be deflated. Dali noted how the psychoanalyst treated him like a scientific specimen, staring at him with objective wonder before telling Zweig, “I have never seen a more complete example of a Spaniard. What a fanatic!” When examining Dali’s painting, Freud commented, “in classic paintings I look for the unconscious, but in your paintings, I look for the conscious.” Dali didn’t know what to make of this cryptic comment, but he took the observation as a personal insult. When he got home, he made sketches of Freud, and wrote alongside one of them, “Freud’s cranium is a snail! His brain is in the form of a spiral—to be extracted with a needle!”

Sigmund Freud Was Impressed with Dali

Despite Dali’s disappointment, Freud was strangely impressed by the young Spanish artist. Prior to meeting Dali, Freud had formed a somewhat negative opinion of the Surrealists, partly due to a dispute with the poet Andre Breton, founder of the Surrealist group. Moreover, Freud’s personal taste in art had tended towards the conservative, so he was largely unimpressed by avant-garde developments. But Freud found Dali surprisingly refreshing and eye-opening, as he explained to their mutual friend Zweig, “Until then, I was inclined to look upon the surrealists… as absolute (let us say 95 percent, like alcohol), cranks. That young Spaniard, however, with his candid and fanatical eyes, and his undeniable technical mastery, has made me reconsider my opinion.”