HomeAnswersWhich Are the Best Examples of Abstract Art?

Which Are the Best Examples of Abstract Art? 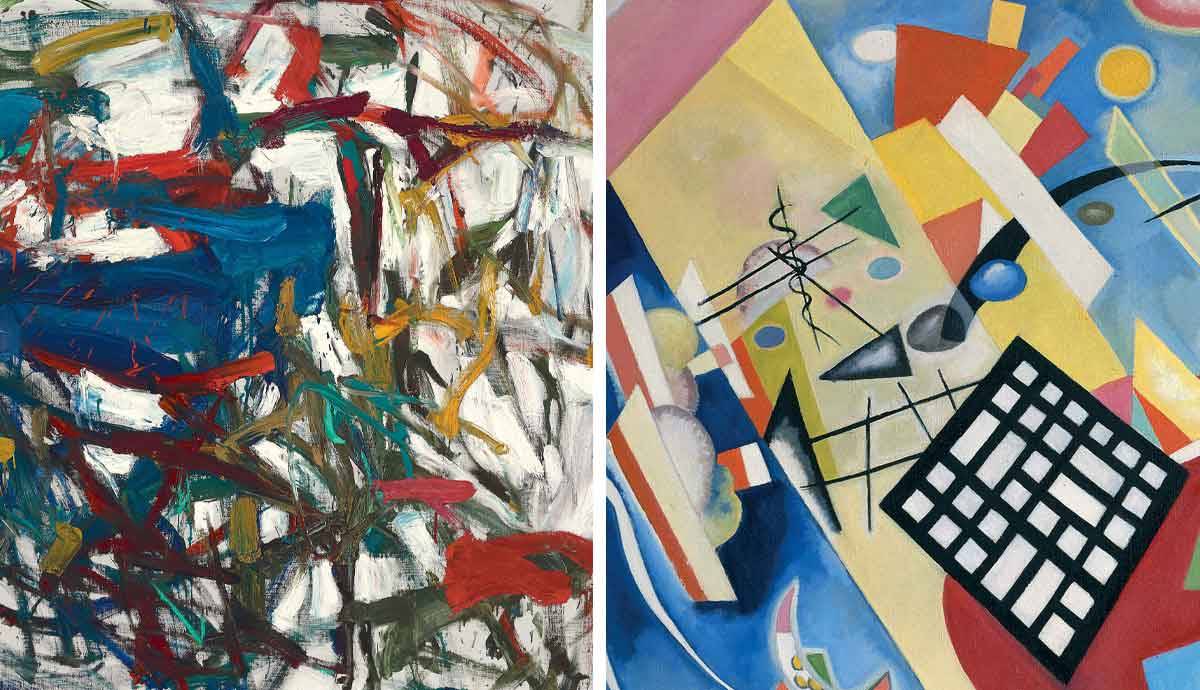 Abstract art is a broad and all-encompassing art term that describes a huge variety of styles, techniques and mediums. This term can cover anything from vast installations to small-scale paintings, weavings, sculptures, or even film and video. From around the early 20th century onwards, abstract art has been an important aspect of art practice. Abstraction has given artists room to experiment freely with forms of expression, without making any direct reference to the real world. We look at just a handful of the best examples of abstract art from the last century, celebrating the vast scope of this art style.

No discussion on the history of abstract art would be complete without a nod towards the great Russian master Wassily Kandinsky. He made some of the first ever truly abstract paintings, prints and drawings. These amazing artworks removed any trace of the real world entirely. Instead, Kandinsky painted geometric shapes, colors and patterns that made reference to a higher spiritual plane beyond the real world. He thereby encouraged us to see art as a space for utopian escapism and transcendental experience. In his iconic painting Black Grid, 1922, Kandinsky pulls us into a dream world, where abstract shapes and forms float freely through space.

Joan Mitchell was a leader in the New York school of Abstract Expressionism throughout the 1950s. She later before relocated to France, where she continued to push further into a radical language of pure abstract art. There, Mitchell made some of the most important paintings of her generation, experimenting freely with richly textured arrangements of expressive paint, build up in complex layers. In her painting Untitled, 1958, she demonstrates her painterly style in full force, applying bold strokes of bright, intense color that seem to swish this way and that across the surface of her canvas.

American artist Carl Andre was a leader in the school of Minimalism. His austere installations pushed the boundaries of acceptability in abstract art. In particular, he demonstrated how ordered, geometric or gridded arrangements of ordinary objects could be constituted as works of art. Andre’s ground breaking artwork titled Equivalent VIII, 1966 was made from a humble pile of bricks, arranged into a painstakingly ordered stack. In its day it caused quite a stir, asking questions about acceptability in art. It also typified the clean, pure simplicity of the Minimalist style. Art critic Jonathan Jones described this artwork as “the most boring controversial artwork of all time.”

Moving into contemporary times, Austrian sculptor Franz West has made some of the most daring and thought-provoking abstract sculptures of recent times. His crude, lumpy and expressive papier mache sculptures are as monstrous as they are fascinating. He takes the languages of European Expressionism and American Abstract Expressionism and pushes them outwards into three-dimensional form. Next, he applies slashes and streaks of iridescent paint across the meteor-like surfaces of his sculptures, creating truly contemporary versions of abstract art. We see this expressive vision demonstrated in Untitled, 2009, which is attached to a metal pole, like a strange scientific specimen in a museum.

German artist Katharina Grosse makes vast, room-sized installations filled with abstract arrangements of color, texture and form. Her wildly ambitious art reveals the great scope of abstract art today. She demonstrates how art can become an engrossing, all-encompassing experience for the art viewer. For example, in the epic installation One Floor Up More Highly, 2011, Grosse incorporates spray painted rocks and soil with vast mounds of Styrofoam. This creates a psychedelic dreamscape that is the stuff of pure imagination.