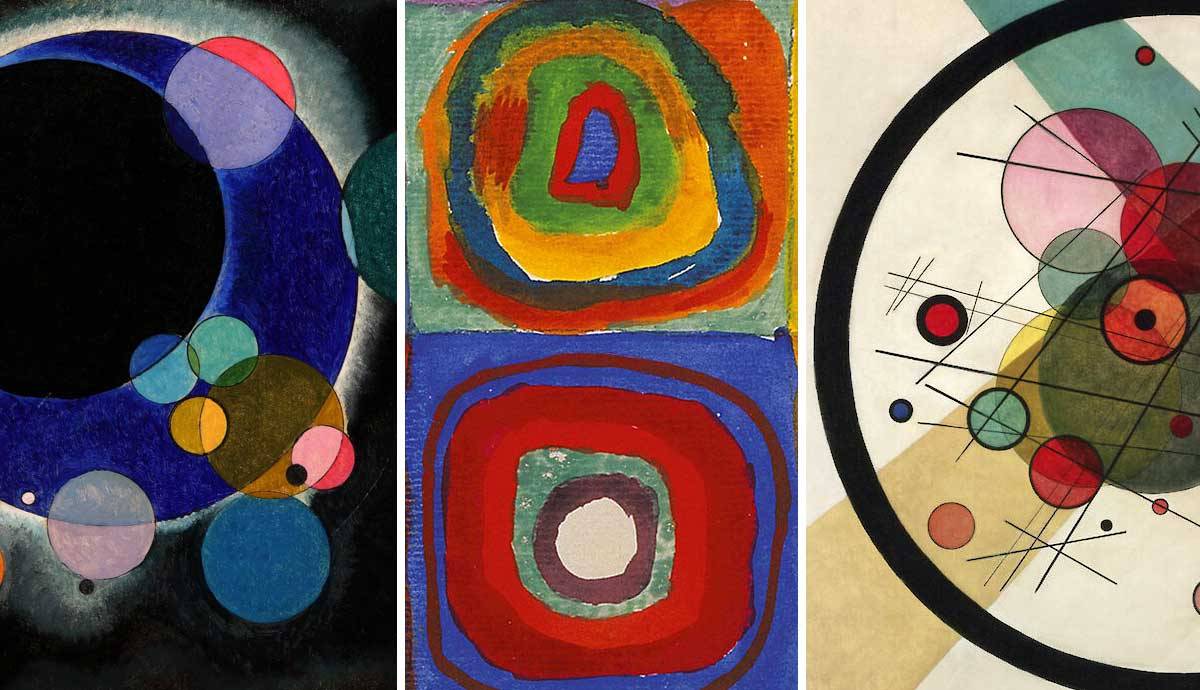 Russian painter Wassily Kandinsky was one of the most important artists of the entire 20th century. He broke away from the real world gradually, moving from expressive landscapes into a series of bold and brilliantly colored abstractions. Circles, in particular, were a recurring feature in his mature, abstract art, and he painted them in a huge range of variations, from planet-like orbs to repetitive concentric designs. But why the circle? Read on to find out more.

Kandinsky Thought Circles Were a Fundamental Building Block in Art

Kandinsky was one of a generation of artists including Robert Delaunay and Josef Albers who painted with bold geometry, distilling their art down into its barest, simplest essence. Squares, circles and triangles featured in the work of many modernists as symbols of life’s core essence, when all the external ephemera had been removed. Kandinsky saw the dot, or point, as a small circle. He argued that this was the most basic, fundamental element of painting, observing “everything starts from a dot.” From this basic dot, Kandinsky argued, one could go on to create any variation of line or shape.

We see Kandinsky exploring how dots can form patterned, circular designs in works such as Color Study, Squares with Concentric Circles, 1913, which lines up rows of concentric, circular patterns in squares within a grid formation. Each circular motif plays with how different colors respond to one another and cause optical effects within the eye of the viewer, an early example of Op Art.

Kandinsky Thought Circles Were a Symbol of Progress and Renewal

Like many modernist artists, Kandinsky thought abstract art should express society’s highest, utopian ideals. Geometric shapes became potent, spiritual symbols expressing higher thought beyond the real world, and they therefore took on a new expressive content. For Kandinsky (and many other modernists) circles represented ideas around progress, regeneration and renewal.

From 1923 to 1929, Kandinsky made a series of ten major paintings, all focused on the circle motif. These include the striking painting Circles within a Circle, 1923, which centers around one large black circle, in which a series of smaller circles seem to float over one another as if caught mid-air. Although circles had often featured in Kandinsky’s earlier art, he said that this particular painting, “is the first picture of mine to bring the theme of circles to the foreground.”

Kandinsky Likened Circles to the Cosmos

In October 1930, Kandinsky wrote a statement in which explained how part of his fascination with circles was their resemblance to the planets floating within the cosmos. This concept, in turn, led Kandinsky to consider how circles could represent any and all aspects of spirituality beyond the real world. He wrote, “Of the three primary forms… the circle points most clearly to the fourth dimension.” We see these ideas come alive in many paintings by Kandinsky throughout the 1920s and 1930s, such as Several Circles, 1926. In this work Kandinsky paints a series of brightly colored circles against a deep dark backdrop, while the largest, darkest circle near the center is surrounded by a ghostly halo of white light, suggesting unseen ethereal forces.

Kandinsky also loved circles because they could create qualities of balance, order and symmetry in his artworks. Formally, he simply enjoyed the visual process of repeating circular motifs in a wide variety of ways, from overlapping forms to dizzying concentric designs. He said, “The circle is the synthesis of the greatest oppositions. It combines the concentric and the eccentric in a single form and equilibrium.”