HomeAnswersMore Than Text Art: Who Is Jenny Holzer?

More Than Text Art: Who Is Jenny Holzer? 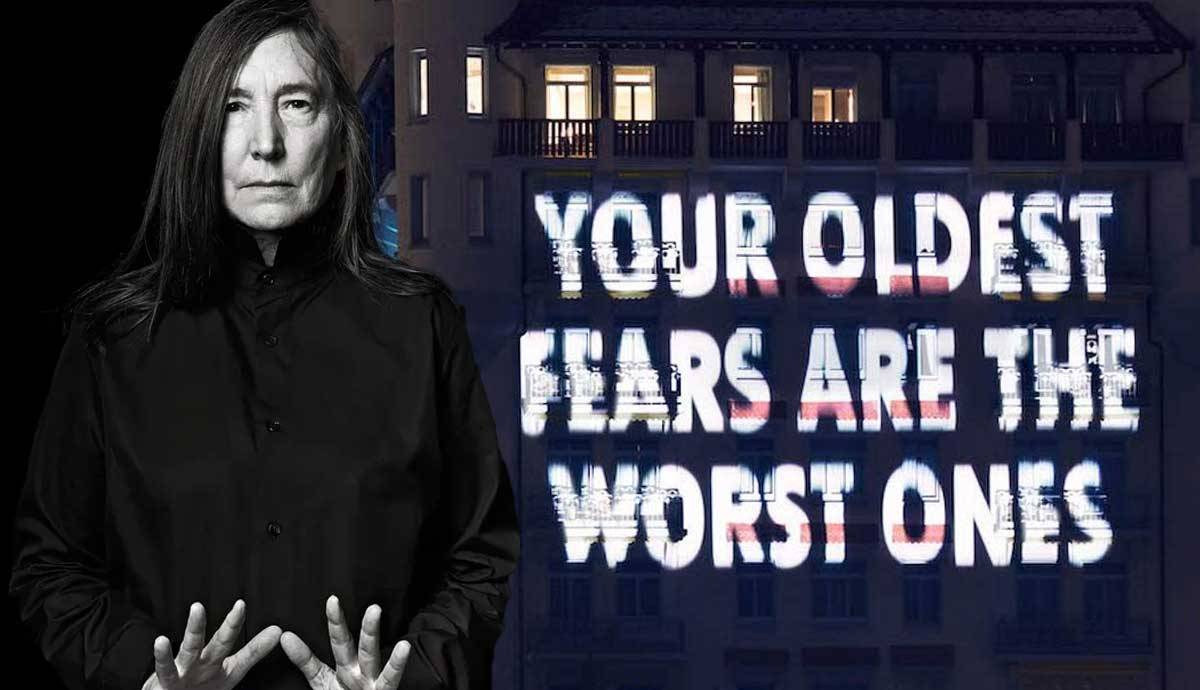 Jenny Holzer is a world-renowned American conceptual and installation artist who has been making art since the late 1970s. Throughout her long and prolific career she has created a huge variety of text-based installation art for public spaces all around the world. These have ranged from city streets to mountainsides and even the surfaces of the ocean. Her short, punchy, and politically engaged statements – like “Protect me from what I want”, or “Private property created crime” – have appeared on billboards, LED signs, carved stone, paintings, t-shirts, light projections and more. They demonstrate just how versatile and varied text art can be. Many of her most powerful artworks have addressed instances of social injustice or inequality, questioning patriarchal and capitalist systems of power. Here is a breakdown of her legacy.

While Jenny Holzer is best known today as a text artist, she originally trained as a painter and printmaker. Born in 1950 in Gallipolis, Ohio, Holzer earned a BFA in printmaking and painting from Ohio University in 1972. From there she studied an MFA in painting at the Rhode Island School of Design, Providence, in 1977. Later Holzer moved to New York, to train in the Independent Study Program at the Whitney Museum of American Art.

Holzer Made Her First Socially Engaged Text Art in 1977

Jenny Holzer made her first text-based art in 1977. This breakthrough work launched an ongoing fascination with the personal and political ramifications of language, and its power to undercut perceived truths about the systems of power that keep society under control. Holzer’s first series of text art was titled Truisms, and made from 1977-79. In the series Holzer produced a series of hand-typed, self-authored short statements. She then distributed them to the public via a series of printed items including stickers, t-shirts, flyers and posters. Statements such as “artificial desires are despoiling the earth,” “abstraction is a type of decadence”, and “boredom makes you do crazy things” were intended, as Holzer put it, to be an antidote to “the usual baloney (we) are fed.”

Holzer followed this series with a body of new work titled Inflammatory Essays. Made between 1979 and 1982, the series was made up of short essays written in a direct and interrogatory manner. She printed the essays onto posters and pasted them anonymously around New York City for viewers to engage with on an intimate level. At the time Jenny Holzer highlighted how important it was for the texts to remain detached and anonymous. She wrote, “The anonymity was critical. I wanted people to consider the ideas but not give more than a passing thought to who produced them.”

Jenny Holzer Has Made Art for Locations All Around the World

Following the success of her early work, Jenny Holzer has gone on to become more ambitious in the scope of her art. She has created public art for many major cities around the world, ranging from Times Square in New York to Piccadilly Circus in London, focusing on high traffic areas where her art can speak to a wide audience.

Holzer Has Produced Art in a Huge Range of Media

Holzer has produced text art in a huge range of media throughout her career. While her early art was generally low-budget and lo-fi, she has since gone on to work with more ambitious materials. In the early 1980s, Holzer produced a series of engraved marble and granite benches and stone sarcophagi featuring her trademark direct, provocative statements. Later in the same decade Holzer began working with LED signage. For her retrospective at the Guggenheim in New York from 1989-90, Holzer designed a site specific LED sign that travelled round the parapet of the building’s rotunda, projecting statements from throughout her career. More recently, Holzer has projected lit up words onto the surface of water, building facades and even mountainsides.