HomeAnswersWhat Are the 5 Most Famous Examples of Contemporary Public Art? 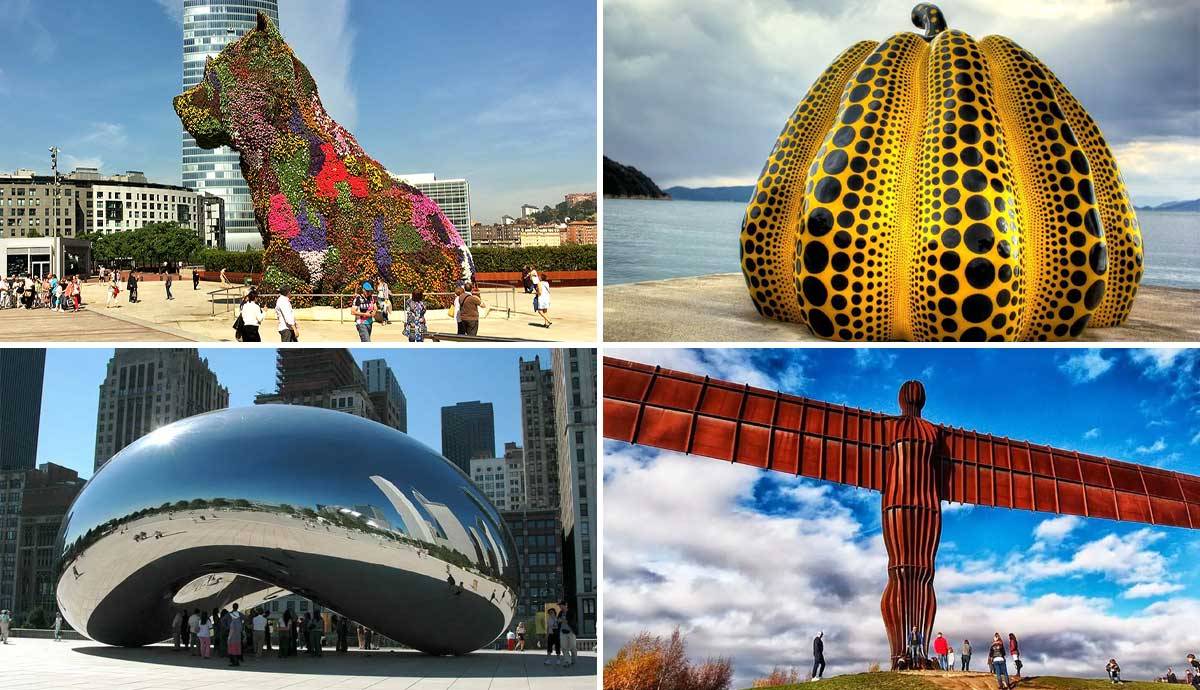 Public art has existed for centuries. We see historical, commemorative monuments to significant people and moments in time in cities all over the world. But contemporary public art, from around the 1970s onwards, is far more diverse and experimental. More than memorials and commemorations, contemporary public art takes a huge variety of forms and sizes, from vast, looming sculptures to small-scale, minimal interventions. It often asks important questions about our place in the world and encourages us to stop and engage with its setting in surprising and unexpected ways. We look through some of the most famous, celebrated and admired examples of contemporary public art from across the globe which are still in situ today.

American Pop artist Jeff Koons created his iconic Puppy near the exterior entrance of the Guggenheim Museum in Bilbao, Spain. A clever combination of temporality and permanence, the puppy’s 40 feet tall form is made from a colossal stainless-steel structure on a concrete base, which is coated with a living garden of flowers. Inside the structure is a complex network of pipes that feed the plants water every 24 hours, as well as a layer of geotextile fabric that nourishes the plants. Based in the shape of a West Highland white terrier, Koons’ Puppy is a powerful example of contemporary public art that spreads a message of exuberance and joy, particularly in the spring and summer when the flowers are in bloom.

No list of contemporary public art would be complete without a reference to Anish Kapoor’s dazzling Cloud Gate, 2006, made for the AT&T Plaza at Millennium Park in Chicago. This immense, mirrored ‘bean’ shape is around 33 feet tall and a whopping 66 feet high. Inspired by liquid mercury, this curved, mirrored form is cleverly designed to reflect the city’s skyline and the clouds above, shining it back to the public in new, distorted ways. Underneath the belly of the sculpture is a 12-foot-high arch, which visitors are welcome to walk under and see themselves reflected in the mirror as they pass through.

Yayoi Kusama’s Yellow Pumpkin is as it sounds – a huge yellow pumpkin around 6 feet tall and 8 feet wide. It is one of the strangest and most popular examples of contemporary public art on our list. In 1994 Kusama installed the bright yellow fiberglass and plastic form on the end of a pier in the Japanese island of Naoshima, known colloquially as an ‘art island’ for its proliferation of art museums and public artworks. In August 2021, Kusama’s much-loved pumpkin, which has attracted visitors from around the world, was swept out to sea during a typhoon. Islanders were able to rescue it from the sea, but it suffered significant damage, making restoration impossible. Instead, Kusama installed a new version of the pumpkin in October 2022, which is more durable and robust than the last.

4. The Angel of the North, 1998, by Antony Gormley, Gateshead, England

British sculptor Antony Gormley’s Angel of the North, opened in 1998 in Gateshead, England, looms over the skyline of northern England, with arms outstretched in a welcoming embrace. At an incredible 66 feet tall and 177 feet wide, it is the largest angel sculpture an artist has ever made. Gormley made the sculpture as a commemoration to the mining industry that once occupied this stretch of land, but it is also a symbol of the area’s burgeoning future as it was entering a new period of industrial upheaval and development.

Tracey Emin’s stirring contemporary public art installation Baby Things, made in 2008, isn’t what you might expect from public art. Eschewing the trend for the large-scale and bombastic, Emin has instead created a scattered array of small-scale bronze casts across the English port town of Folkestone. The casts are of objects relating to early childhood, including small soft toys, children’s shoes, and garments of clothing. From a glace, they look like cast-offs thrown from a child’s pram, but on closer inspection their bronzed permanence becomes clear. These interventions highlight the town’s high rate of teenage pregnancy, and the vulnerability that both the young mothers and their babies inevitably face.