HomeAnswersWhy Was the Angel of the North Built? 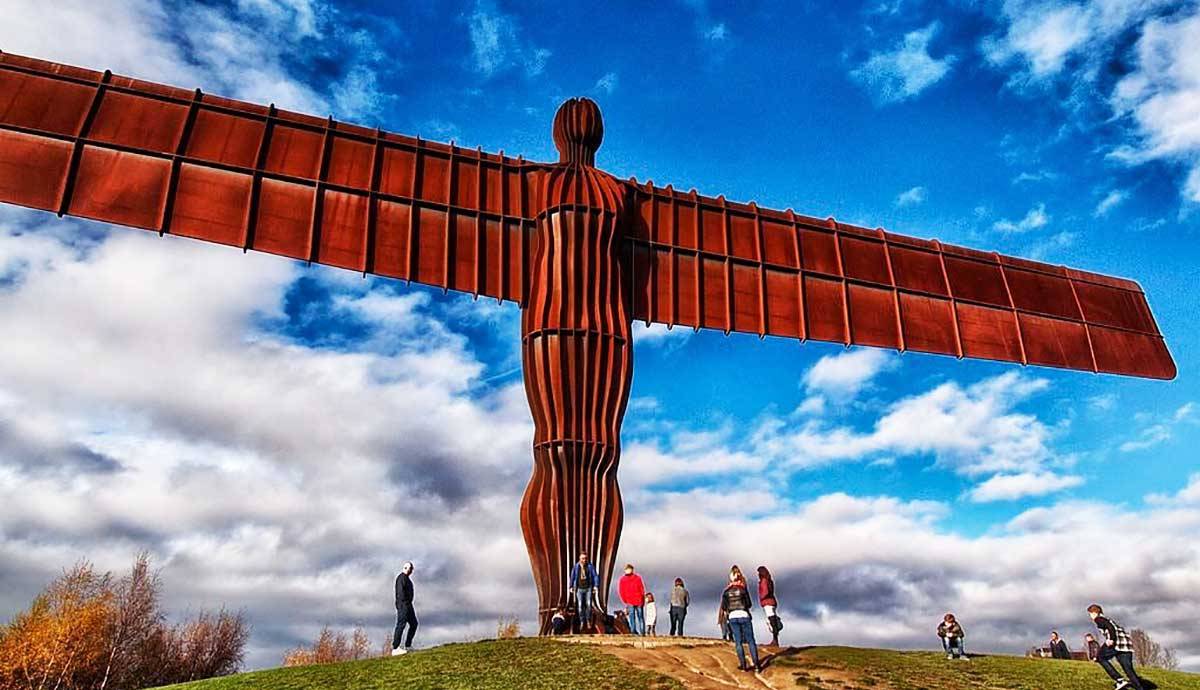 Since its completion in February 1998, the UK’s Angel of the North has become one of the most iconic public artworks in the world. Taller than four double decker buses and wider than the wingspan of a jumbo jet, renowned British artist Antony Gormley made this colossal red-brown steel sculpture for North-East England. It sits near the motorway on the southern approach into Gateshead, and this prominent location means it is seen by thousands of passers-by every day. Many locals have even come to see the Angel of the North as a symbol of home. But why was this giant metal angel built, and what are the meanings behind it?

In 1990, Gateshead Council earmarked the site where the angel now resides for a public artwork. The location of a former colliery pithead baths, this vast stretch of open land was lying unused and in need of modernization. The council opened up a competition for an artist of international stature to design a suitable sculpture that would reflect on the rich history of the site, calling for “a millennial image that would be a marker and a guardian for our town.” In 1994, Gateshead selected British sculptor Antony Gormley for the project. Gormley already had a prominent reputation for making deeply atmospheric and contemplative figurative sculptures in other locations around the UK, but the Angel of the North was by far the largest and most ambitious commission he had ever embarked on.

Throughout the course of its planning and construction, Gormley’s sculpture caused controversy and attracted criticism from many locals. Some objected to its austere design, while others worried it would distract motorway drivers. Nonetheless, Gormley persisted, and today the British public have largely accepted his contemporary sculpture as an iconic landmark for the historic Gateshead area. As well as being clearly visible from the A1 and A167 motorways, and the East Coast Main Line rail route, visitors also flock from around the world to see the Angel of the North up close.

A Guardian and Messenger

Gormley chose to make an angel for the commission because he hoped they would act as a form of guardian, herald or messenger welcoming travelers from near and far. Its outstretched wings become almost like an embrace, a beacon of warmth in an otherwise barren, industrial area. Artists have made angel sculptures throughout history. But Gormley’s Angel of the North, with its Cor-ten steel exterior and ribbed, industrial design, is a modern take on the theme. It is also the largest angel sculpture anyone has ever made.

A Celebration of History

After receiving the commission, Gormley made extensive research into the local area, and his angel sculpture responds intuitively to the unique history of Gateshead and the North of England. He was acutely aware that coal miners used to spend hours and hours toiling away in the dark beneath this site, and he hoped his angel would act as a meaningful reminder of their steadfast endurance, creating what he calls a “poetic resonance.” He says, “The angel resists our post-industrial amnesia and bears witness to the hundreds and thousands of colliery workers who had spent the last three hundred years mining coal beneath the surface.”

Gormley gave the Angel of the North a rust-red exterior in order to tie them in with the earth, and the soil under which the coal mines once existed. The steel itself is also a reference to the manual workforces of steel casting, cutting, welding and construction that once sustained the North of England.

A Symbol of Hope

The artist selected an angel emblem as a symbol of hope, during a time of huge cultural renewal in the Gateshead area, particularly as it transitioned out of its historical associations with industry, and into a new, yet uncertain future. Gormley said, “I wanted to make an object that would be a focus of hope at a painful time of transition for the people of the North-East, abandoned in the gap between the industrial and the information ages.”

How Jaume Plensa’s Sculptures Exist Between Dream and Reality?