Henry Clay Frick was a wealthy businessman with great taste in art and the money to buy it. His collection and mansion are now known as the Frick Collection. 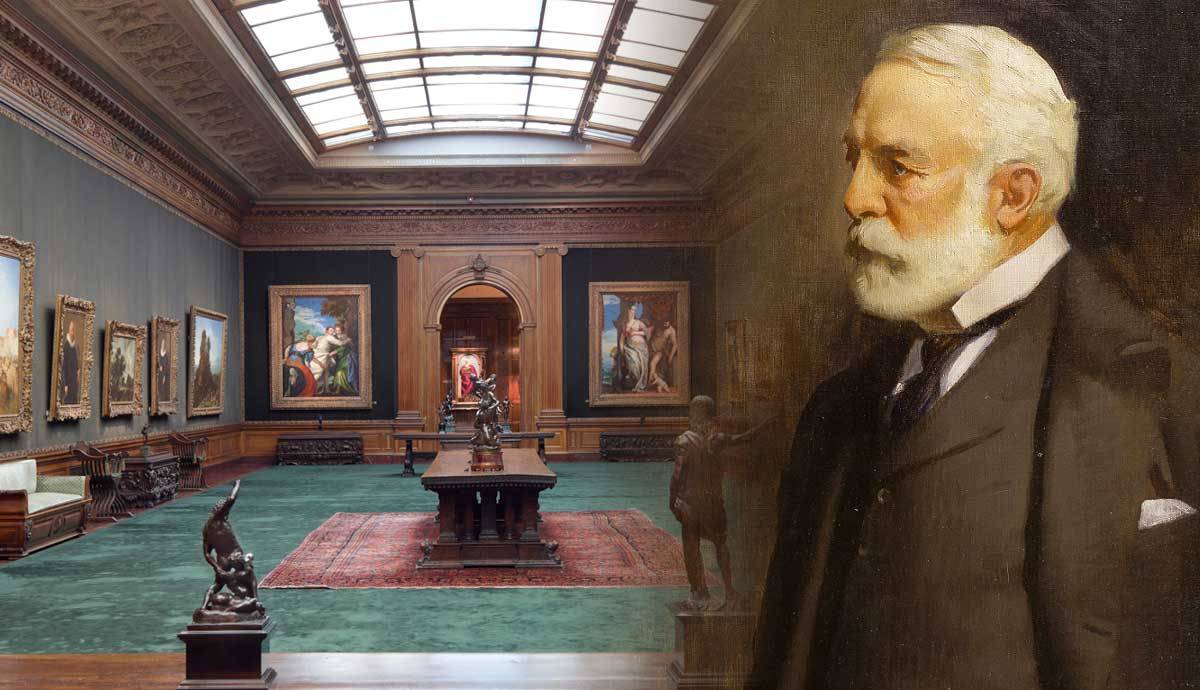 Henry Clay Frick (1849-1919) was a Pennsylvania-born industrialist. Despite coming from an undistinguished background, he rose to become a millionaire in coke production (an ingredient needed for metallurgy), steel, and railroads. He was a business partner of Andrew Carnegie and J.P. Morgan and served as a board member in both their steel corporations as well as several railroad companies.

Like every other Gilded Age robber baron, Henry Frick was no angel, especially in terms of his unforgiving attitude towards unions and strikes. His art collection, however, is evidence of Frick’s gentler and more human side. He started purchasing art early in life and once said that art collecting gave him more real pleasure than anything I have ever engaged in, outside business. As his fortune grew, he graduated from purchasing prints to purchasing major Old Masters. Frick married Adelaide Childs in 1881 and they had four children. Only two survived to adulthood, son Childs Frick and daughter Helen Clay Frick. The family originally lived in Pittsburgh, where their home, called Clayton, is now a museum and gardens. It is not affiliated with the New York museum.

The Frick family moved from Pittsburgh to New York City in 1905, initially renting an elaborate Vanderbilt home with a built-in art gallery. In 1912, they hired Thomas Hastings of the prominent Beaux-Arts architectural firm Carrière and Hastings to design them a restrained, classically-inspired home at the corner of 70th Street and Fifth Avenue. It was completed in 1914. The original structure, which only comprises a portion of the museum we know today, includes a mixture of domestic spaces and purpose-built art galleries, but nearly every room was filled with Frick’s collection.

Following the fashionable taste of the era, Frick purchased primarily European paintings from the Renaissance through the late 19th century. Highlights from his original collection include Giovanni Bellini’s St. Francis in the Desert, Hans Holbein’s Sir Thomas More and Thomas Cromwell, Rembrandt’s Self-Portrait and The Polish Rider, several Vermeers, English portraits from Van Dyck to Gainsborough and Reynolds, Velasquez’s portrait of the King of Spain, a pair of Veroneses, Romantic and Barbizon landscapes, and suites of painted panels by Francois Boucher and Jean-Honoré Fragonard.

Towards the end of his life, he would expand into European decorative arts, enamels, Renaissance bronze sculpture, and Chinese and European porcelain. He owned a few Impressionists and works by Whistler (then a cutting-edge artist), but he did not generally collect Modern or American art. His acquisitions came through major dealers like Knoedler & Company and Joseph Duveen, the latter of whom would have a huge impact on Frick’s artistic taste. Famed interior designer Elsie de Wolfe also influenced his decorative arts acquisitions.

Unlike his contemporary Isabella Stewart Gardner or later counterpart Albert Barnes, Henry Clay Frick had no desire to freeze his art collection at the moment of his death. Unlike those two, Frick doesn’t seem to have bought or displayed art according to any personal aesthetic theory he might want to preserve. Upon establishing his museum in his will, he even left money for further acquisitions. For this reason, not all of the Frick Collection’s major masterpieces were purchased by the founder himself. Some of the museum’s most iconic objects, most notably Ingres’s Comtesse d’Haussonville, did not join the collection until after Frick’s death.

Frick’s art-loving daughter Helen was instrumental in expanding the collection for most of the 20th century. She established the Frick’s strong set of early Italian Renaissance paintings, an area her father had not favored, but otherwise insisted that only objects fitting her father’s taste should be acquired. For this reason, you won’t find any Cubism, abstract art, African art, etc. at the Frick, though the museum does sometimes mount temporary exhibitions of contemporary artists that respond to the permanent collection in some way. The museum continues to regularly announce the acquisition of additional artworks by artists in styles harmonizing with the original collection. Most recently, the museum received a gift of 26 works on paper by major artists such as John Singer Sargent, Francisco de Goya, and Elizabeth Vigée Le Brun.

Making the Home a Museum

Frick did not open his home and collection to the public during his lifetime, but he made plans to do so after his death. It’s unclear exactly when he first decided to turn his collection into a museum, but he may have been inspired by the series of particularly stellar acquisitions he picked up, courtesy of Duveen, from the former collection of J.P. Morgan in the 1910s.

In his will, Frick left the mansion and collection to the public for the purpose of encouraging and developing the study of the fine arts, and of advancing the general knowledge of kindred subjects. The Frick family home and its artistic contents were to become a museum following the death of his wife, who lived in the mansion for the rest of her life. In Frick’s own words, it should become a public gallery to which the entire public shall forever have access.

After Adelaide Frick passed away in 1931, a board of directors that included Helen, Childs, and many of Frick’s art-collecting industrialist peers inaugurated Frick’s desired museum. The Frick Collection opened in 1935 after a major expansion and renovation by architect John Russell Pope. Pope added several key rooms, including the iconic Garden Court (formerly an open-air space) and Oval Room, so seamlessly that few visitors realize they were not part of the original home. The building was further expanded in 1977 and 2011 and is presently being expanded again. The mansion retains its unique fusion of historic house and art gallery, and spaces like the living hall and library remain much the way Frick left them. Despite being under no legal obligation to do so, Frick Collection curators generally stay true to the spirit of Frick’s vision, though not the letter of his original arrangements.

With an equally strong interest in studying the collection as in expanding it, Helen Clay Frick established the Frick Art Reference Library next to the museum. It opened in 1924. It is one of the most significant libraries for art historical research anywhere in the United States. Helen continued to play a major role in the Frick Collection, where she served on the board of trustees, until her death in 1984. She also established the Frick Art Museum in Pittsburgh. Although Helen did not have any children, the descendants of her brother Childs remain involved with the museum.

The Frick Collection temporarily vacated its historic mansion in 2020 to begin another renovation and expansion project. When completed, it will create new exhibition galleries (permitting the display of works now in storage) and also open up the second floor to the public for the first time. If all goes according to plan, this will be achieved without compromising the peaceful and elegant ambiance the museum is famous for. In the meantime, the museum is displaying its collections in the former Whitney Museum building on Madison Avenue – a setting that couldn’t possibly be more different from the usual one.

Despite its relatively small size, the Frick Collection is a thriving institution and a major force in the New York City art scene and art history in general. The Frick produces temporary exhibitions relevant to its permanent collection in concert with other museums and publishes many books for both scholarly and general audiences. In 2020 and 2021, however, the Frick Collection reached a new level of public acclaim when it produced Cocktails with a Curator, a series of sixty-six short videos about artworks in the museum collection. It was originally intended as a way to connect with museum audiences during the COVID-19 shutdown but quickly expanded beyond that to become a weekly highlight for many viewers, including this author.

Cocktails with a Curator ended over a year ago, but all episodes are still available to view on YouTube, and the museum will soon release the same material in book form. The series is a great example of the Frick’s unique combination of sophistication and popular appeal, and it’s highly worth watching. It’s unlikely that Henry Clay Frick, who died in 1919, could ever have dreamed that his museum would achieve worldwide fame for a series of videos that were often based on artworks he never even saw in his lifetime. However, there isn’t much question that the Frick Collection is doing a great job of living up to his stated desires – making his collection available to everyone and advancing the study of the art.