Frederick Law Olmsted is best known as the creator of Central Park, but his final project was equally impressive. At Biltmore Estate, Olmsted inspired America’s first attempt at scientific forestry. 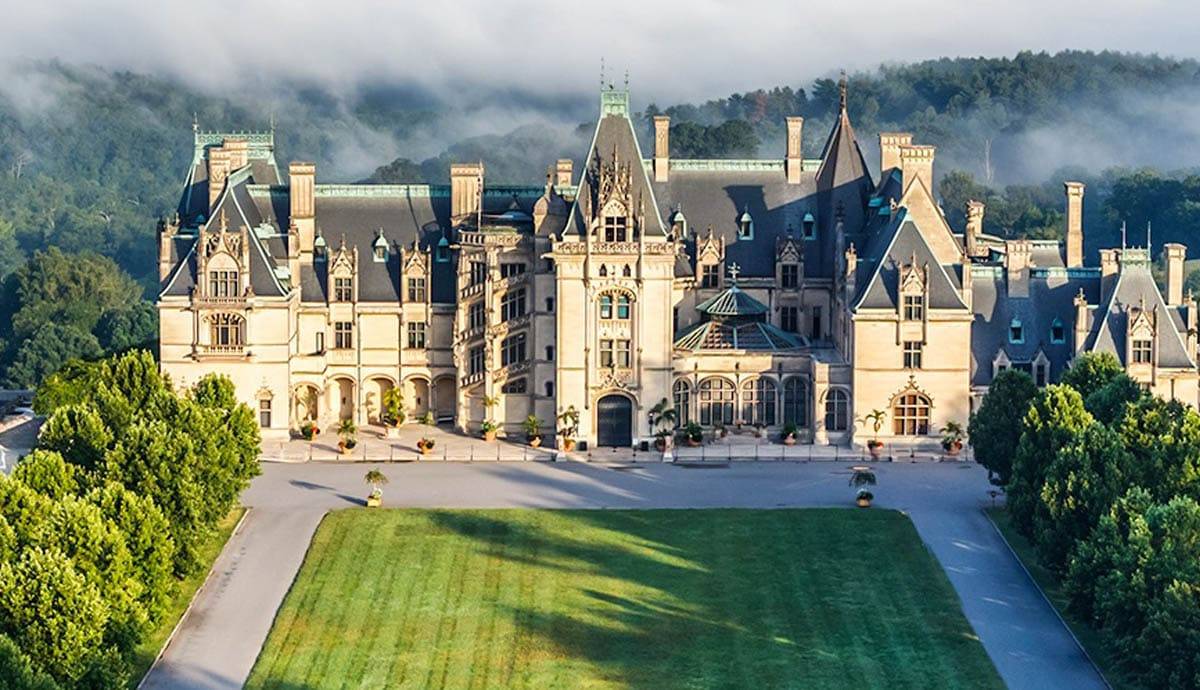 George Washington Vanderbilt III (1862-1914), a grandson of the famous Cornelius Vanderbilt, first visited Asheville, North Carolina in 1888. While there, he fell in love with the mountainous area celebrated for its healing air and water. So, he decided to build himself a home here. Vanderbilt bought 125,000 acres of land in the Blue Ridge Mountains, then hired Richard Morris Hunt to design the house and Frederick Law Olmsted for the landscaping.

Richard Morris Hunt (1827-1895) was the most successful and sought-after American architect of the 19th century. The first American to study architecture at the École des Beaux-Arts in Paris, Hunt primarily worked in historically-inspired styles, especially the classicizing Beaux-Arts aesthetic taught at the École. He is most famous for New York City’s temples of culture, like the Metropolitan Museum of Art, and Gilded Age mansions, like the elite summer homes at Newport, Rhode Island. He had designed for the Vanderbilt family many times before.

Frederic Law Olmsted (1822-1903) is best known as the co-designer of New York City’s Central Park, on which he collaborated with Calvert Vaux. Olmsted was America’s first landscape architect. He worked on a grand scale, designing everything from city parks and park systems to college campuses, early suburban developments, the U.S. Capitol Grounds, and the 1893 World’s Fair. Although willing and able to radically transform nature when necessary, Frederick Law Olmsted disliked formal garden designs, preferring a soft-edged, picturesque aesthetic. A proto-environmentalist, he was also involved in the movement to save Yosemite. Like Hunt, he had designed for the Vanderbilts before.

Biltmore Estate was the final project of both these great artists. Hunt died before Biltmore House was complete, while a sickly and forgetful Olmsted had to delegate the last phases to his sons. In a show of respect quite unusual for such a privileged client, Vanderbilt commissioned renowned portrait painter John Singer Sargent to commemorate Biltmore’s architect and landscape architect in paint. Their portraits still hang on the second floor of Biltmore House today.

With 250 rooms and 175,000 square feet, Biltmore House is the largest private home ever built in the United States. The American equivalent of a castle or palace, its scale and elaborateness surpass even the surviving summer “cottages” of other Vanderbilt family members in Newport, Rhode Island. The construction began in 1889, and Vanderbilt celebrated its opening during Christmas 1895, though many details had yet to be completed.

Biltmore’s architecture is based on French Medieval and Renaissance castles, specifically the Chateaux of Blois, Chenonceau, and Chambord. This style is usually termed Chateauesque or French Renaissance Revival. The house has a steeply-pitched slate roof on a limestone structure, with copious, medieval-style architectural decoration. The façade abounds in tracery, crockets, pointed arches, gargoyles, and grotesques. There are also large architectural statues of Joan of Arc and St. Louis by Karl Bitter. Inside, the cantilevered spiral staircase, with a massive chandelier above it, is specifically based on one at Blois, but much of the interior design is more closely related to English manor houses.

The highlight inside is the 72-foot-long banqueting hall, with an organ, massive stone fireplaces, tapestries, and medieval-style furnishings. The ornate, two-story library has walnut bookcases, carvings, and a Baroque oil painting on the ceiling by Giovanni Pelligrini that was imported from a palazzo in Venice. The glass-roofed Palm Court, a conservatory-like indoor garden, features Karl Bitter’s sculpture Boy Stealing Geese atop a fountain. Other interior highlights include Gustavino tile, a massive indoor swimming pool, 35 bedrooms, and rooms filled with fine art and antique furniture. Hunt and Vanderbilt had taken an extended trip to Europe together to get inspiration and purchase furnishings for the house.

Of the Biltmore Estate’s original 125,000 acres, Frederick Law Olmsted only landscaped 75 of them. The areas closest to the house are most tightly ordered, in the kind of traditional, formal gardens he usually avoided at all costs. The landscaping grows progressively wilder, more picturesque, and more in keeping with Olmsted’s principles, with distance from the mansion.

Frederick Law Olmsted worked with the gardener Chauncey Beadle on the millions of plants that went into the ground on the estate. Recognizing the gaps in his own knowledge, Olmsted always employed skilled gardeners, horticulturalists, and overseers on his projects. He could design the big picture and even plan out the small details, but he needed experienced gardeners to make it all come to life. Some plant and tree specimens were collected from the surrounding area, while others were cultivated in an on-site nursery. Vanderbilt also collected cuttings on his world travels to join them. As was his habit, Frederick Law Olmsted avoided the formality and straight lines as much as possible in Biltmore’s landscape, aside from in the gardens closest to the mansion.

Vanderbilt primarily purchased all the estate’s eventual acreage to preserve his views of the Blue Ridge Mountains and French Broad River and to protect his privacy. Clearly, not all this land was going to be formally landscaped, and Vanderbilt turned to Frederick Law Olmsted for alternative ideas. He initially wanted a park, but Frederick Law Olmsted rejected the idea as unsuitable due to poor soil conditions. Much of the land in Vanderbilt’s initial purchases was in bad condition due to generations of locals stripping it for timber. This was not a promising site for a pleasure park.

However, Frederick Law Olmsted was familiar with the area from his earlier travels, and he knew all about the native forests it had once contained. In fact, such forests still existed not far away, and Vanderbilt ended up purchasing some of that land as well. Therefore, Olmsted suggested that Vanderbilt begin an attempt at forestry on the bulk of the land, after setting aside a smaller chunk for gardens, a farm, and a deer park. If successful, the endeavor might revitalize the land and also yield saleable timber that would help to defray some of the estate’s massive costs. Vanderbilt agreed.

Forestry is the scientific management of forests in order to preserve and perpetuate them, making them sustainable and usable for timber at the same time. It was already important in Europe, where people had been relying on the same forests for centuries. In America, however, citizens still commonly believed their woodlands to be inexhaustible and did not yet understand the need for forest management. However, the environmentally-inclined Frederick Law Olmsted had begun to recognize the need for scientific forestry in America. Olmsted himself did not know very much about forestry, and after an early attempt to do things himself by planting many white pine trees, he quickly realized he was in over his head.

Frederick Law Olmsted recommended that Vanderbilt hire Gifford Pinchot, a Yale graduate who had also studied at the French Forestry School in Nancy. The first educated forester of American origin, Pinchot would eventually become the first Chief of the United States Forest Service and would also co-found the Yale School of Forestry and Society of American Foresters. The German-born Dr. Carl A. Schenck ran Biltmore’s forestry endeavors starting in 1895 after Pinchot left for other projects.

Schenck established the Biltmore Forestry School on the site in order to train the next generation of American practitioners. In this way, Biltmore not only gradually revitalized its own forests but also played a critical role in establishing American forestry, just as Olmsted had hoped it would. The area is considered the Birthplace of American Forestry. Frederick Law Olmsted suggested that Vanderbilt add a research arboretum to the grounds to benefit scientific forestry even further.  To Olmsted’s lasting disappointment, however, such an arboretum was never realized.

After Vanderbilt’s death, his widow Edith sold 87,000 acres of Biltmore’s newly-cultivated forest to the United States Forest Service for a relatively small sum. It became the Pisgah National Forest, named for Mount Pisgah in the Blue Ridge mountains. In total, 100,000 acres of former Biltmore lands now belong to the Pisgah National Forest, while Biltmore Estate still holds 8,000 acres. In 1930, Vanderbilt’s heirs opened Biltmore to the public in order to defray the unbelievable costs of running this massive estate during the Great Depression. Still owned by Vanderbilt’s grandsons, the estate is now a resort and winery, while the house is intact and open as a museum.