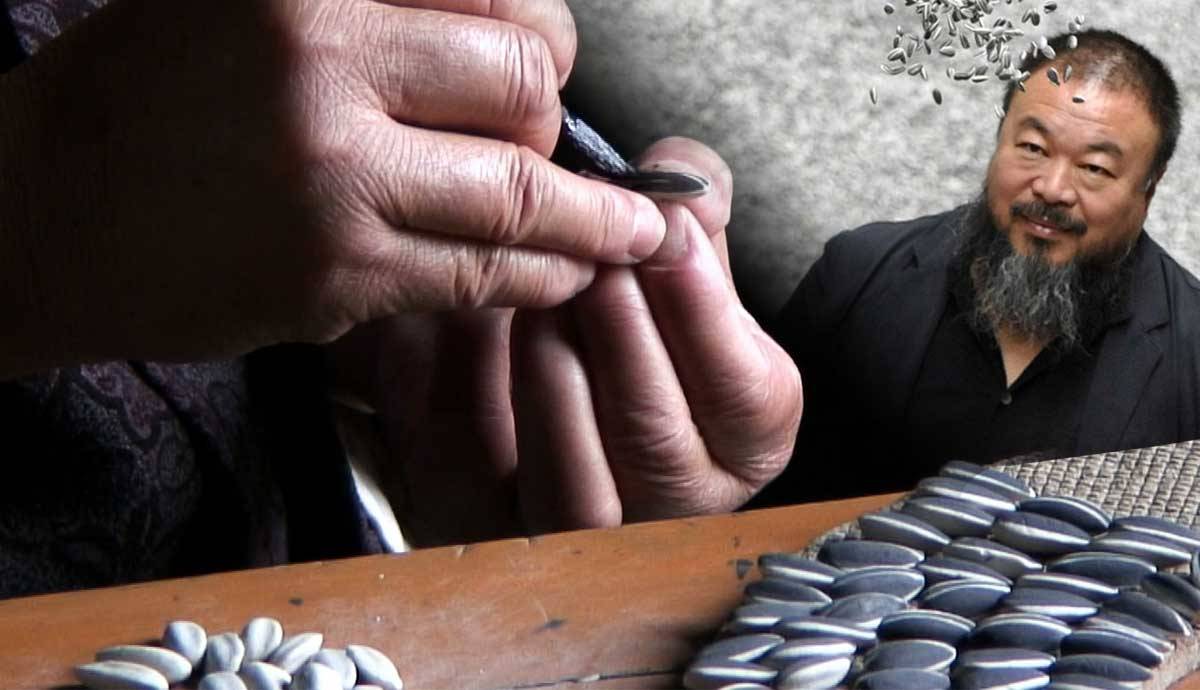 In 2010, the renowned Chinese artist Ai Weiwei filled Tate Modern’s entire Turbine Hall with over 100 million sunflower seeds. But these were no ordinary seeds – each tiny husk was in fact an exquisitely crafted mini-sculpture made from porcelain and hand-painted to resemble the real thing. Ai employed 1600 Chinese artisans to make these precious miniatures, before gathering them together into one vast and all-encompassing work of art, spread out like a carpet across the gallery floor. But why did Ai Weiwei choose the humble sunflower seed, and why on earth did he have so many made? Let’s look into the ideas behind the artwork to find out more.

When Ai Weiwei was a child growing up in a poor district in the northwest of China, he remembers the special significance sunflower seeds came to have. He and his friends would offer one another sunflower seeds as gifts or treats, not just as a snack, but because they hid inside them the potential to grow into something so big and full of joy. When he grew older, Ai Weiwei came to see sunflower seeds as a potent symbol of childhood poverty in China, and also a meaningful metaphor for the power of human connection and sharing during difficult times.

Another reason why Ai Weiwei chose a link to sunflowers was because of their role in Chinese communist propaganda during his childhood. When Ai was growing up, he remembered propaganda posters featuring Mao Zedong, or Chairman Mao, with a face acting as the sun, while sunflowers leaning up towards him represented citizens of the People’s Republic of China. But in this artwork Ai Weiwei subverts this notion by relating sunflower seeds back to the poverty of his childhood.

3. The Individual vs. the Mass

Ai Weiwei relates his Sunflower Seeds to individual people, and the way they can easily become lost when absorbed into a large mass. Although the seeds might all look similar from a distance, highly skilled craftsmen made each one by hand, carefully sculpting and painting them over many hours to look like the real thing. By drawing attention to the individual in amongst the crowd, Ai reflects on the dangers of conformity and censorship in modern China, and the way political bodies can so easily lose sight of the individual’s nuanced needs. As with many of his activist artworks, Ai explores how this seemingly tiny, humble object can reflect on the cost of human suffering brought about by totalitarian regimes.

Ai Weiwei had all his sunflower seeds made by artisans from the Chinese city of Jingdezhen, the ‘porcelain capital’ of China. Highly skilled workers have been making exquisitely crafted Chinese porcelain for thousands of years here, which were once transported into the west via the Silk Road. Ai Weiwei draws our attention to this district of China in order to contrast it with the cheap, mass produced ‘Made in China’ stamp that has become ubiquitous across the west. By emphasizing the rich history of skill that exists in China, Ai asks us to consider the role we have played as consumers buying cheap, mass-produced factory goods as opposed to the individually crafted objects that keep ancient traditions alive.

5. A Sensory and Tactile Experience

Ai Weiwei originally made his Sunflower Seeds to be a participatory work of art, which visitors could physically engage with by walking over the smooth, tactile seeds, touching them, or picking them up. Unfortunately, when Ai’s installation went on display at Tate Modern’s Turbine Hall in 2010, the seeds were becoming damaged by the sheer volume of visitors. The gallery had to rope off the area, but the seeds could still be seen at close view from several angles of the gallery, or viewed from above over the Turbine Hall bridge. When seen from a distance, the sheer mass of these many seeds creates a sublime visual impact, and demonstrates the incredible power of individuals that come together into one.

Since the Tate display in 2010, Ai has arranged the seeds into a variety of cone and carpet shapes for different gallery spaces, adapting these fascinating miniature sculptures to suit the space which they come to inhabit.

The Chinese Revolution of 1911: Failure or Success?