Why Did Caravaggio Paint Medusa? 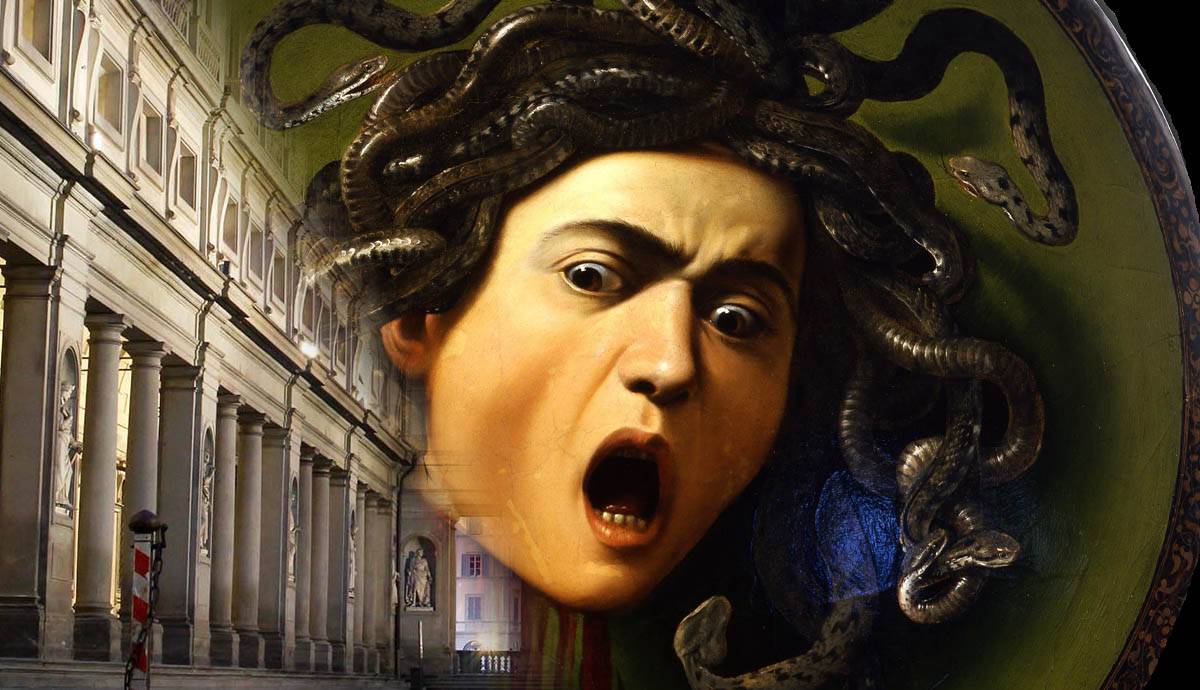 Michelangelo Merisi da Caravaggio was the incredible Italian Baroque painter who dazzled audiences with his breath-taking works of art. He told terrifying biblical and mythological stories with stark, theatrical lighting and startling levels of realism, inducing fear and wonder into the heart of Italy. Today, his paintings continue to shock, terrify and inspire art lovers worldwide. Between 1596 and 1597 Caravaggio made two of his most shockingly gruesome paintings, featuring the Greek Gorgon Medusa with a severed head. Many have asked, why did Caravaggio choose to paint the strange character of Medusa, who could turn men into stone with a single look, and particularly at her moment of destruction? Let’s look into history to find out more.

Cardinal del Monte commissioned Caravaggio to paint two versions of Medusa. Both paintings were gifts to the Grand Duke of Tuscany, Ferdinando I de Medici, who presumably had a taste for all things gruesome. The second version, painted in 1597, is the most famous of the two. The reason for the commission was to rival Leonardo da Vinci’s earlier depiction of Medusa, which the Medici family once also held in their private art collection. Sadly, Da Vinci’s Medusa is lost, so we will never know exactly how Caravaggio’s version compared to that of his predecessor.

Caravaggio Painted Medusa Onto a Shield

Caravaggio painted his Medusa onto a convex wooden shield, and it could still function as a working shield today! He did this for several reasons. One was simply because this was what Da Vinci had done before him, and he was imitating the design of the great Renaissance master. Another reason ties in with the Greek mythological tale of Medusa, and the reflective shield Perseus used to help him find her without looking her in the eye. Caravaggio might also have painted Medusa onto a shield because he had heard a story about how Da Vinci once painted a shield for his father with a realistic array of snakes, lizards and monsters.

He Was Exploring His Range as an Artist

Although Caravaggio took on Medusa as a paid commission, the project must have appealed to him for the creative challenges it presented. Medusa is a terrifying mythological creature filled with imaginative possibilities, and her image is one that has fascinated artists and writers for centuries. Inspired by this rich history, Caravaggio painted his two versions of Medusa with some unusual and surprising characteristics.

Caravaggio’s Medusa Was a Self-Portrait

Caravaggio based the face of Medusa on his own image – yep, that’s right, that gaping mouth and contorted, severed head oozing blood was in fact a self-portrait. This makes Caravaggio’s female character take on an androgynous and asexual quality. But basing Medusa on his own face was mostly practical – it meant Caravaggio could explore the haunting horror of Medusa’s facial expression by contorting some strange grimaces in a mirror, rather than asking a model to do it for him. He often modelled for his own paintings, and seemed to enjoy making himself look ill or horrible, as can be seen in his chilling Young Sick Bacchus, 1592, where his pale lips and clammy face suggest extreme illness.

His Medusa Is Truly Horrible

Rather than showing her head on the ground, Caravaggio’s head hovers in mid-air, and this allows him room to add the gory detail of gushing blood as it falls from the gash below her neck, while slithering snakes swirl and swarm around her hairline. Interestingly, Caravaggio shows Medusa with her gaze averted, as if stripping her of all her former power, leaving her a gory, gaping mess of blood, slime and horror. To make matters even worse, the terrified expression on Medusa’s face reveals her dawning realization that this is how she will be for all of eternity, condemned to a horrendous fate of disembodied powerlessness.

Where Is Caravaggio’s Medusa Today?

Caravaggio’s most famous version of Medusa, from 1957, is in the Uffizi Museum in Florence. This Medusa is displayed in amongst an entire room full of the Baroque master’s art, so you can see how it fits in with the artist’s other gruesome and fearful subjects. Caravaggio’s Medusa from a year earlier, made in 1596, is held in a private collection, though it’s probably not hung on anyone’s bedroom wall.

Where Is Caravaggio’s David and Goliath Painting?