A leader in the Pre-Raphaelite Brotherhood, William Holman Hunt made startlingly lifelike paintings of wild, rugged landscapes, both in Britain and The Holy Land, portraying simmering scenes filled with tragedy, romance and mythology. 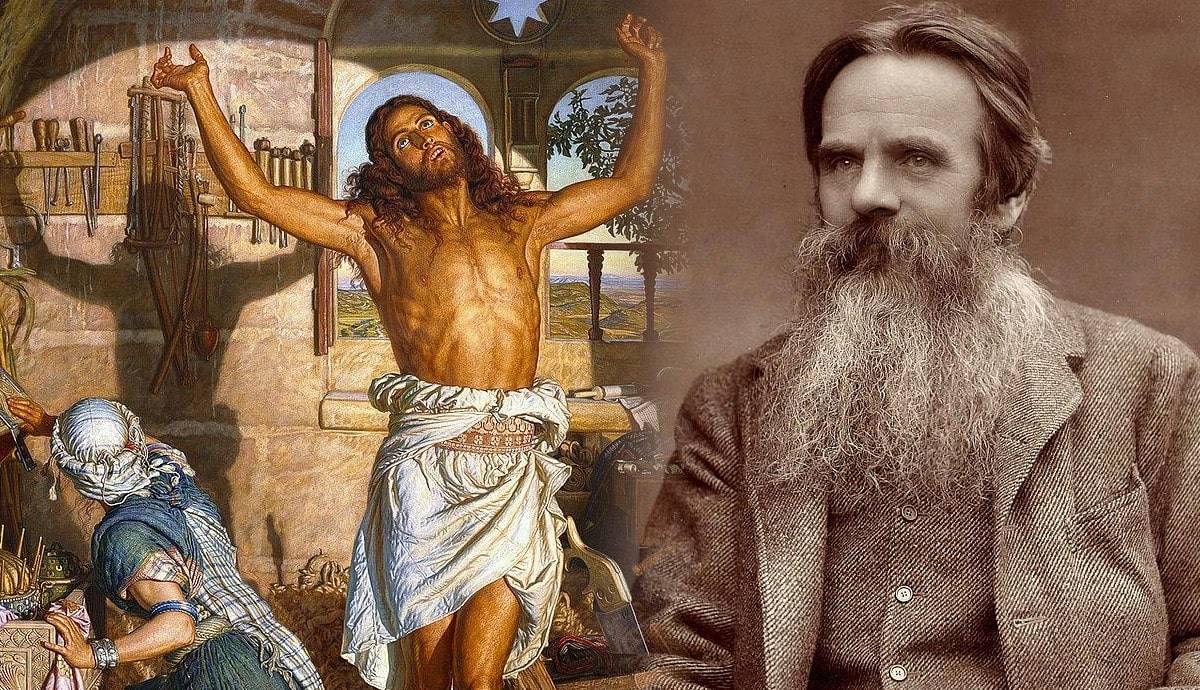 A vital leader of the Pre-Raphaelite Brotherhood, William Holman Hunt radically changed the face of 19th-century British art. Following the ideas of the naturalist and writer John Ruskin, his daring and adventurous art broke away from classical conventions, focussing instead on the innocence, morality, and realism of Medieval art. The melancholy romance of Hunt’s lovelorn, Arthurian heroines, and ethereal Biblical saints set amidst a tangled wilderness, helped define the Arts and Crafts era, with enduring imagery that continues to inspire and influence today.

William Holman Hunt was born in London in 1827 to relatively poor parents; his father was a warehouse manager who often struggled to get by. Hunt’s family were strict Christians, instilling a religious belief in their son that would stay with him for life. As a child, he avidly read Biblical stories which lit up his imagination. When he was just 12 years old, Hunt was instructed by his family to take up work as an office clerk. Five years later, Hunt finally persuaded his parents to allow him to attend art school at London’s Royal Academy in 1845.

At the Royal Academy Hunt met the painters John Everett Millais and Dante Gabriel Rossetti, who would become lifelong friends. The three men shared a disdain for the entrenched, traditional teaching methods of the Academy, which focussed on copying classical ideals and working against heavy, dark backgrounds. Together they founded the Pre-Raphaelite Brotherhood, which revived the pure simplicity and honest morality of Medieval ideas, pre-, or before, Raphael, the Renaissance, and industrialization. They were also greatly influenced by the ideas of John Ruskin, who urged artists to find the real truth of life in nature.

Hunt and his contemporaries developed a way of painting on a white background with clear, sparkling colors, while closely observing and copying nature with minutely accurate attention to detail. Hunt’s subject matter came from various sources including Arthurian legends, Romanticist or Medieval poetry and Biblical texts, or even his own stories, usually with a moralizing message, while he and his fellow Pre-Raphaelites painted muses from life who were tall, dreamy and pale, with long, flowing locks of wild hair.

Such stylized, modern women were in stark contrast to the idealized, classical models of previous generations and initial reactions were deeply negative. It would take several years before the true merit of their art was ready to be accepted; by the 1850s shock had turned to excitement and Hunt was attracting a flock of gallerists and buyers.

Hunt spent much of his life fascinated by Biblical texts, a passion which drove him to travel to The Holy Land. He set off on a pilgrimage to Jerusalem in 1854, visiting and painting various iconic landmarks including the Great Sphynx of Giza and the Egyptian Pyramids. He was also attracted to the harsh, barren nature of the landscape, as seen in his famous painting The Scapegoat, 1854-56, which portrays a desolate, lonely place as a symbol of human endurance.

Following his return to England, Hunt married Fanny Waugh in 1865. Hoping to move to Palestine together, the pair were held back in Florence after an outbreak of malaria. There Fanny gave birth to a son, but both mother and son tragically died of cholera before they could reach their new home. Devastated, Hunt created a memorial in Florence in her honor, while his stirring, tragic portrait Fanny Waugh Hunt, 1866-68 captures her ethereal beauty. In the years that followed, Hunt traveled on to the East alone, producing ever more ambitious works of art.

Five years later, following his return to England, Hunt caused a huge scandal when he struck up a romance with his late wife’s sister, Edith Waugh and married her overseas (it was illegal to wed a wife’s sister in England). He took his new bride to Jerusalem, where they built a home and raised a young daughter.

In his later years Hunt returned to London with his family, but interest in the religious morality of the Pre-Raphaelite Brotherhood was waning in favor of a more honest Realism. While other Pre-Raphaelites abandoned the style, Hunt remained true to the group’s original ideals and became a founding member of the Arts and Crafts Exhibition Society, a precursor to the great Arts and Crafts Movement in Britain.

William Holman Hunt: Did you know?

William Holman Hunt’s nickname from his friends as an adult was “maniac”, because of his loud, ringing laugh. His fellow painter Dante Gabriel Rossetti wrote, “Hunt is jollier than ever, with a laugh which answer’s one’s own like a grotto full of echoes.”

During his ongoing visits to Jerusalem, Hunt was so entranced by Eastern society that he described himself as having an “Oriental mania.”

Before Hunt set off on his first voyage to Jerusalem, his fellow Pre-Raphaelite John Everett Millais gave Hunt a signet ring as a parting gift. Hunt wore the ring for the rest of his life, as a symbol of their enduring friendship.

During his first two-year stay in Jerusalem, Hunt grew a huge, bushy beard – when he returned to England his friends could hardly recognize him.

Both Hunt’s first and second wives, Fanny and Edith Waugh, were great Aunts to the famous writer Evelyn Waugh. Some think Waugh was so angered by Hunt’s scandalous second marriage, that he deliberately published a monograph on Hunt’s friend, Dante Gabriel Rossetti, instead of Hunt.

While living in Jerusalem Hunt made his most famous painting, The Shadow of Death, 1870-3, on which he wrote he was “hoping now or never to prove what my powers as an artist are.” Back in London, The Athenaeum magazine called the work, “not only the noblest and best of Mr Hunt’s pictures, but one of the masterpieces of modern art.”

A firm believer in supernatural forces, Hunt attributed a strange encounter one night with a glowing white ghost as one of the catalysts for the incandescent painting, The Light of the World, 1853-4.

At the height of his career, Hunt sold The Finding of the Saviour in the Temple,1854-60, to art dealer Ernst Gambart for a whopping £5,500 (over £2 million by today’s standards), making it the most expensive painting ever sold by a living artist at the time.

Due to his failing eyesight in his later years, Holman Hunt employed the painter Edward Robert Hughes as an assistant to help maintain his precise detail. Hughes assisted with The Lady of Shalott, 1905, and a larger version of The Light of the World.

In his later years, Hunt wrote the two-volume autobiography, Pre-Raphaelitism and the Pre-Raphaelite Brotherhood, 1905, which remains one of the most comprehensive introductions to the movement.