HomeAncient HistoryRome in Chaos: The Year of the Five Emperors (193 CE)

During the Year of Five Emperors, five men tried to hold the Roman imperial throne. In the end, from the ashes of the civil war, a new and powerful imperial dynasty emerged. 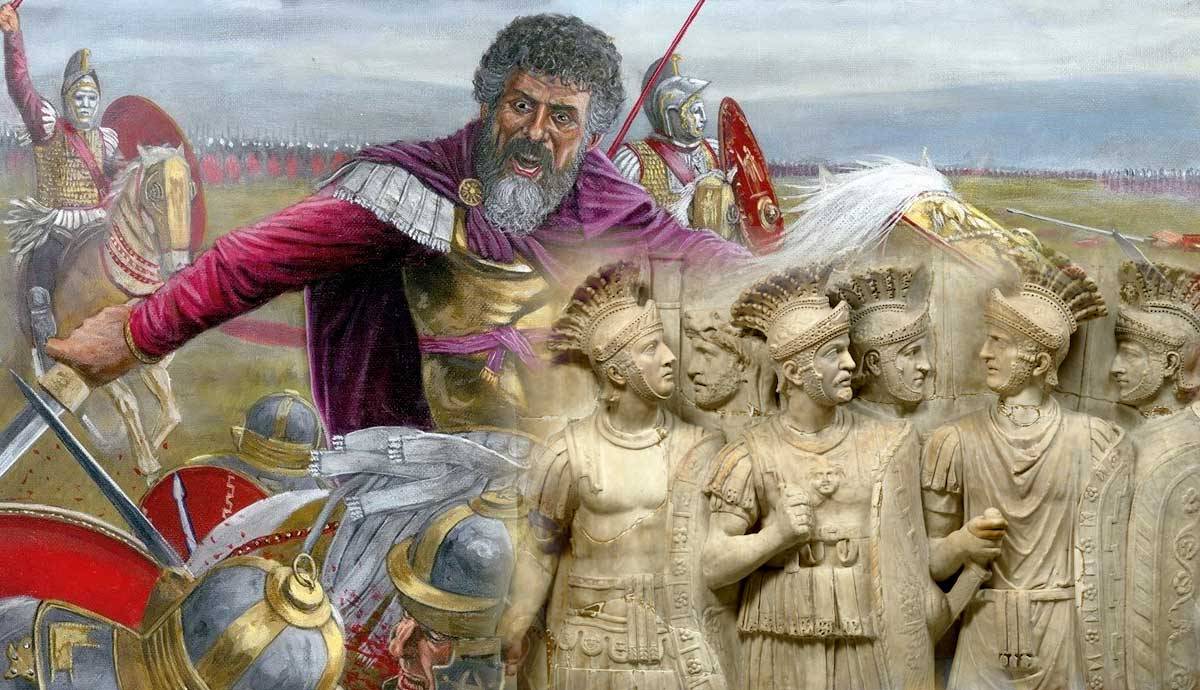 The so-called “Year of the Five Emperors” (193 CE) was not a good year to be a Roman emperor. What began with the murder of Emperor Commodus, the last member of a dynasty known for its “five good Emperors”, soon turned into a civil war that tore the Roman Empire apart.

This event also marked the height of power for the infamous Praetorian Guard, who were transformed from being the emperors’ bodyguards to becoming greedy kingmakers, selling the Empire to the highest bidder in one of the most bizarre auctions in history. In only one year, as many as five men claimed the throne. Most failed to hold it, losing their lives in the process. Yet, the year that plunged Rome into chaos led to the ascension of Emperor Septimius Severus, who established a new and powerful dynasty, signaling a renewal of stability and a new period of prosperity for the Roman Empire.

Year of the Five Emperors: Praetorians Out of Control

The “Year of the Five Emperors” was one of the most chaotic and bloody years in the history of the Roman Empire, beginning appropriately, with a stab in the back. On New Year’s Eve of 192 BCE, Emperor Commodus was assassinated by his bodyguards — the Praetorian Guard. Established by Emperor Augustus, the Praetorians were the only military unit housed within the walls of Rome, and they exploited their proximity to the ruler to increase their power and influence. Their headquarters — the Castra Praetoria — was a veritable bastion and a visible sign of the Praetorians’ high status.

The trouble had already begun back when the Praetorians murdered Emperor Caligula in 41 BCE, installing to the throne his uncle Claudius, and throwing a wrench into the Senate’s plan to remove the imperial family. While the guardsmen had no hand in the demise of Emperor Nero in 68 BCE, they also played a bloody role in the struggle of the “Year of Four Emperors”. Despite abusing their power, the Praetorians remained the emperor’s bodyguards. In addition, during the second century, the Praetorians participated in military campaigns along the Rhine and Danube rivers, in Dacia, and in the East, further increasing their influence.

The Greatest Auction the World Has Ever Seen

Following the removal of Commodus, the Praetorians installed a former military officer named Pertinax on the throne. It is unclear if Pertinax was involved in the coup. Reportedly, he was even unwilling to take the purple. However, he was one of few candidates present in Rome after a purge of potential competitors. Furthermore, the Praetorians believed that Pertinax would reward them generously for their services. However, the greedy kingmakers badly miscalculated.

The new Emperor’s attempt to drastically devalue the Roman currency angered both aristocrats and the military but failed to produce the funds needed to pay the emperor’s “benefactors.” Then Pertinax made another mistake by trying to restore strict discipline among the Praetorians. On the 28th March 193, only three months after making him emperor, the kingmakers killed hapless Pertinax.

What followed was one of the most bizarre and shameful episodes in the history of the Roman Empire. Determined not to repeat their mistake and wishing to get paid in full, the Praetorians organized a public auction, offering the ultimate prize to the highest bidder — the imperial throne!

It was truly a surreal moment in which wealthy aristocrats competed for the purple. Pertinax’s own father-in-law, Sulpicianus, offered 20, 000 sestertii, an enormous sum, to each guardsman. However, senator Didius Julianus won the auction by adding 5,000 more sestertii to his offer at the last moment. If the situation was not bizarre enough, Julianus came late to the auction and had to shout his price from behind the closed doors of the Praetorian camp. Only after the guardsmen accepted his offer could Julianus enter and be proclaimed the emperor.

The Drums of War

From the onset, Didius Julianus’ position was highly precarious. To start with, Julianus had bought the throne, rather than acquiring it traditionally, through succession or conquest. This made him a profoundly unpopular emperor. The populace detested the new ruler, and the Senate, forced by the Praetorians to confirm their choice, was deeply unhappy. The Praetorians could keep the city in check. What they could not control was the distant frontier.

When the news of public anger reached the army, three influential generals — Pescennius Niger in Syria, Clodius Albinus in Britain, and Septimius Severus in Pannonia, openly revolted and declared themselves emperors. Julianus now faced three challengers in three parts of the Empire. His most pressing issue, however, was the army stationed nearest to Rome, the Danubian legions of Septimius Severus. Having the same realization as his unfortunate predecessor, Julianus tried to discipline and drill the pampered Praetorians. But it was too little and too late. The Praetorian Guard were no match for the veteran legions from the frontier. After failed negotiations, on the 2nd of June 193, the man who bought the Empire met his death. Julianus ruled for mere 66 days.

And Then There Were Three

Julianus’ demise left the throne vacant once again. The Senate promptly recognized Septimius Severus’ claim — their decision “facilitated” by the presence of the soldiers in the capital. The role of the legions would only increase during the Severan dynasty, making the soldiers kingmakers in the turbulent period of the third century. The new emperor also punished the Praetorians involved in Pertinax’s murder. Yet, the year of five emperors was far from over. Before marching on Rome, Severus secured an alliance with Clodius Albinus, whom he recognized as “Caesar” — his junior emperor. His flanks secured, Severus could now focus on his last remaining foe — Pescennius Niger.

Niger had the backing of the wealthiest provinces of the Empire, including Egypt, a region crucial for supplying Rome with grain. However, Niger’s Syrian legions were inferior to Severus’ battle-hardened troops, both in numbers and discipline. After a series of battles, Severus defeated Niger in the Battle of Issus, in May 194. The usurper tried to escape to Parthia but was captured by Severus’ troops and executed. However, the civil war continued until the end of 195, when Severus captured the last bastion of resistance — the strategically important city of Byzantium, following a long siege. As a punishment, Severus razed the town before he had it rebuilt.

The victory in the East consolidated Septimius Severus’ position on the throne. Yet, this was not the end of the troubles for Rome. The chaos of the year of the five emperors would last four more years. To establish a new dynasty, Septimius Severus got the Senate to recognize his son Caracalla as heir to the throne. He also declared Clodius Albinus an enemy of the state. Deceived by his former ally, Albinus had no choice but to take the bull by the horns. Initially, Albinus scored several victories taking almost all of Gaul and holding Spain. However, a lack of support from the Rhine legions left Albinus in a weaker position than Severus, who had the full backing of the troops on the Danube and the Rhine.

Finally, in 197, the armies of the two emperors met near Lugundum (present-day Lyon) in the largest battle ever fought by Roman forces. The opposing forces were roughly equal and the outcome hung in the balance until the very end when a cavalry charge swung the battle in Severus’ favor. Clodius Albinus managed to flee the battlefield to the safety of the city walls, where he took his own life. The civil war was finally over, and Septimius Severus became the sole emperor. The founder of the Severan dynasty died a natural death in 211.

Septimius Severus left behind a divided legacy. He managed to establish a strong imperial dynasty and restored the might of Rome. During his reign, the Roman Empire reached its greatest extent. Severus led his legions to the last Roman victory against Parthia, strengthening the eastern frontier. He also secured North Africa, bolstering the southern defenses of the wealthy region. After razing it to the ground, Severus rebuilt and refortified Byzantium, laying the foundations for what would become Constantinople, the future Roman capital and one of the most important cities in the world.

The emperor’s patronage of the soldiers, whom he perceived as the source of imperial power, further consolidated the emerging dynasty. The Praetorian Guard, who once had exclusive access to the throne, lost their influence. The Senate, too, had its power diminished, unable to counter the brute force of the legions.

However, the militarization of the Roman Empire was a double-edged sword. The soldiers were powerful backers, but only for the emperors who proved to be competent commanders. The inability of the last Severan emperor to control the army led to the dynasty’s downfall. It plunged Rome into another bloody struggle, the most chaotic period in its history: the crisis of the third century. The Empire, however, endured, and when Diocletian took the reins at the end of the 3rd century, he established an autocratic and absolutist rule — the dominate — inspired by Severus’ model.