Renaissance architecture marked all of Europe with its straight and sober lines crowned with intricate decorations. It represented the rediscovery of ancient beauty in a medieval setting. 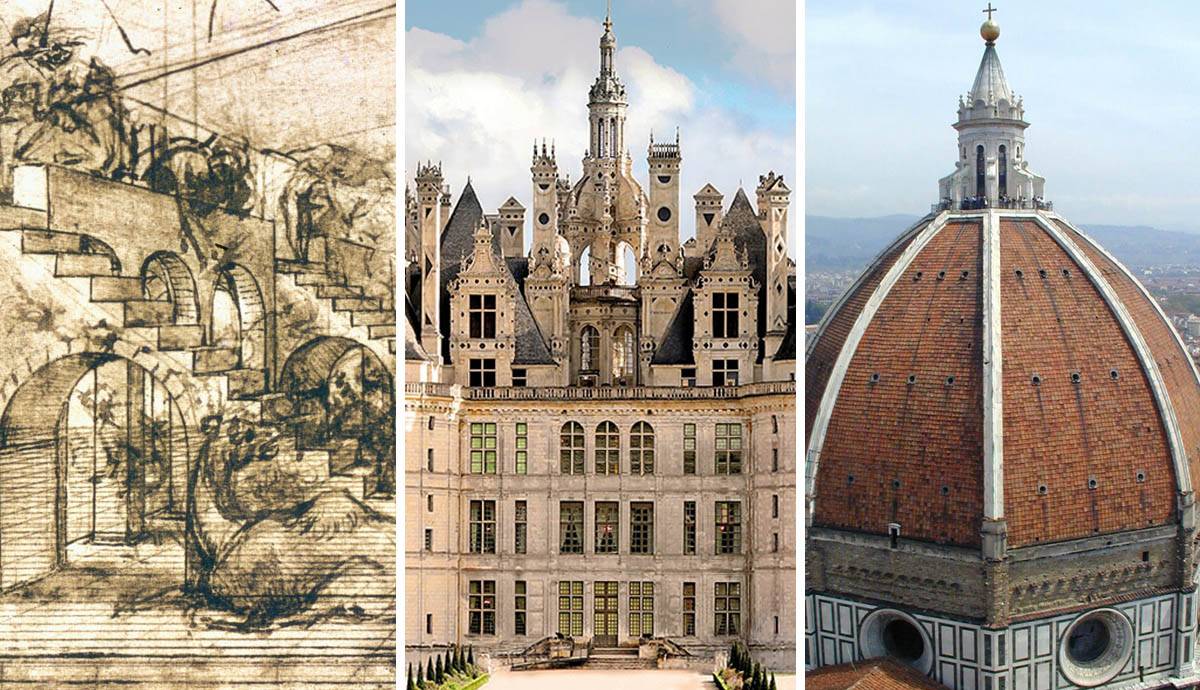 As an architectural style, Renaissance architecture appeared in 15th century Florence, Italy, and from there on spread throughout Europe until the end of the 16th century. The Renaissance style replaced the medieval Gothic style and took its inspiration from Roman ruins present in Italy as well as from books of ancient architects, such as Vitruvius. It is a style that both revives and innovates the techniques of ancient Greeks and Romans. Below are presented the main characteristics that will allow you to recognize this unique style anywhere in Europe.

1. The Key List Of Elements To Look For In Renaissance Architecture

If you keep in mind the following list of elements, you will be able to tell Renaissance buildings apart from others easily. First, only three types of buildings were built: churches, palazzos, and villas. The villa was meant to be a countryside residence and the palazzo as a town residence. These types are still valid in the rest of Europe, with palazzo as palace and villa often transformed as a castle.

Moreover, Renaissance buildings feature flat classicism, meaning that the building’s walls do not have many physical depths in their decorations. To understand this, it is best to look at a Baroque exterior and see that it features a lot of depth in the decoration. Another point of the flatness is the fact that curved lines are never used in buildings. Everything is relatively straight, featuring only a few arches.

The most common decorative elements are the columns, pilasters, pediments, arches, blind or not, and stringcourses. Moreover, the different stories of the façades are often marked with decorations, so one can easily tell if the building is one story high or two stories high just by looking.

2. The Use Of Columns In Renaissance Architecture

Although most people tend to associate columns with ancient Greek or Roman temples, they are also an important characteristic of Renaissance architecture. After the Fall of the Western Roman Empire in 476, the knowledge and techniques developed by the Romans were gradually lost. In the 15th century, the people who lived in Italy did not know the techniques of ancient Romans. They were surrounded by ruins of Roman buildings that they had no idea how to rebuild. However, because the region of Italy became interested in old manuscripts, chance had it that they came across ancient documents purchased from Arabs. Some were treatises on architecture.

Columns seem to be an easy element to build, but that is only apparent. Without any knowledge of the right height, width, and the right rigorous mathematical formula, one will not be very successful in building a column. By finding books that explain these details, Renaissance architects could learn how to do it. They also learned about the three registers of columns: doric, ionic, and corinthian. By learning how to build columns, architects rendered them a key feature of most Renaissance buildings.

3. The Extensive Use Of Geometrical Shapes

While Gothic architecture makes use of some geometrical shapes, it does not have an understanding of them as Renaissance architecture does. Mastery of geometrical shapes in architecture is essential because it can ensure the stability of the building over time and use space in the right way. It also contributes to the height of a building: the more stable a structure is, the taller and grander the end result may be.

Most building plans from the Renaissance make use of the circle and square in their designs. This ensures that the building has a sturdy foundation, but it also plays an aesthetic role, making the plan full of proportion. The use of geometrical shapes in plans is also visible on the façades because most of them are an interplay of circles, squares, and triangles.

The vibrantly painted interiors of most Renaissance buildings are a must on this list, despite not exactly being an architectural characteristic. Due to the betterment of both materials and techniques, frescoes are often highly associated with Renaissance art. The Sistine Chapel is, by far, the most famous example where architecture provides the proper setting for a breathtaking painted interior.

Artists grew in numbers during the flourishing of arts in the 15th and 16th centuries in Europe, and patrons commissioned them more than ever. This increased the interest in interior decoration. The austere ancient look of a Renaissance building exterior gave way to an interior with painted frescoes depicting religious subjects, often with ancient-like painted vegetal decorations.

5. The Return Of Domes In Renaissance Architecture

Domes are familiar architectural elements that are still widely used in contemporary buildings. However, they were not used in medieval architecture and made a comeback only in the Renaissance. Due to ancient authors like Vitruvius, architects were able to figure out the proper method for building a dome.

Why was it so tricky beforehand? A dome does not have a foundation of its own. Instead, it uses the building walls on top of which it is placed as a foundation. Due to this, a wrong mathematical formula may cause the building to collapse under the dome’s weight.

The most well-known Renaissance domes are those made by Brunelleschi in Florence and by Michelangelo in Rome. However, their construction would not have been possible without the theory provided by Vitruvius. In this sense, the recovery of ancient manuscripts again played a significant role in the development of Renaissance architecture.

6. The Importance Of Linear Perspective In Architecture

Another important discovery of the Renaissance was linear perspective. This discovery was made by artists who employed it mainly in painting and drawing. However, it came to play a crucial role in architecture as well. This occurred due to the Renaissance human ideal that encouraged people to have a universal approach to artistic and intellectual activities, thus avoiding a specialization of talents. Because of this, most architects were also artists.

As architects were also draftsmen or painters, they started using linear perspective in architecture as well. The first to do so was Filippo Brunelleschi. The role of linear perspective in Renaissance architecture is the same as in painting: it must guide the eye to a designated place and offer a sense of depth. The sense of space and depth was vital as it gave what we would call today a 3D sensation. Linear perspective was beneficial for façades as it provided the necessary visual guide for the eye. The viewer would follow the long and straight lines of a column and arrive at its decorated capital.

If you ever look at a building and can identify some ancient elements but fail to figure out the origins of all architectural characteristics, you are most likely looking at a Renaissance building. Renaissance architecture borrows many elements from ancient Greek and Roman buildings but it is not an exact replica. Both architects and artists were deeply encouraged to create elements or motifs that would go well with ancient ones. Even Michelangelo would often innovate ancient motifs and advised his colleagues to do the same.

However, this liberty did not mean that anything was possible. The artist had to be inspired by ancient Greek and Roman culture and create new elements that would still seem to be from the same register. To put it in more contemporary terms, the artist had to enter the mood of the Ancients and create accordingly.

Because Renaissance architecture has proportion, harmony, and linearity, symmetry seems to be a natural requirement that completes this picture. For example, the Renaissance artist Leonardo Da Vinci considered that the relationships found between elements were similar to the mathematical relationships found and derived from nature. If nature, God’s creation, is mathematical, proportionate, and symmetrical, then man-made creations ought to be so too. Artists like Da Vinci took to heart this observation and strived to create balanced works in their painting, sculpture, and architecture.

While Renaissance architecture is sure to offer a variety of buildings, symmetry is a common element all over. It is true for buildings from the Netherlands or Germany even if they appear to be very different from their Italian counterparts. This is proved through looking at the buildings and the best-selling architectural books from the 16th century. One such book is the architecture treaty of Vignola, which sold in more than 250 international editions during the Renaissance period. Accompanied by practical instructions and a lot of illustrations, it was the to-go book for any architect. Moreover, this demonstrates the close relationship between theory and practice in the Renaissance.

9. The Philosophy Behind Renaissance Architecture

While the previous points dealt with more practical characteristics, it is also worth mentioning the primary philosophy behind Renaissance buildings. During the Middle Ages, the great and imposing buildings of the Gothic style sought to make use of light: huge stained-glass windows would create a holy atmosphere for the visitor. Thus, in what way did the philosophy change for Renaissance architecture?

For Renaissance architecture, the ideal went a bit beyond traditional and medieval Christianity – it admitted that there were valuable ideas in ancient thought as well. Thus, the Renaissance is a mix of pagan culture and architecture repurposed for Christian traditions. The great minds of Antiquity are no longer banished, but they are accepted and used in the name of God. The image that a building should have is that of a pagan temple now offered to God. This is visible in how exteriors and interiors are constructed. We see stern, pagan-looking exteriors with small hints of Christianity, and painted and decorated interiors that tell Biblical stories, such as episodes from Jesus’ life.

10. Buildings of Renaissance Architecture You Ought To Know

The Renaissance style is extensively showcased in numerous buildings. Here are a few of the most notable examples:

St. Peter’s Basilica in Rome, Italy. It is a grand church that highlights a significant number of the characteristics discussed above.

Additionally, the must-know Italian Renaissance masters are as follows:

Through their incredible works, you can get a glimpse of the classical and canon Renaissance buildings that inspired the entirety of Europe.