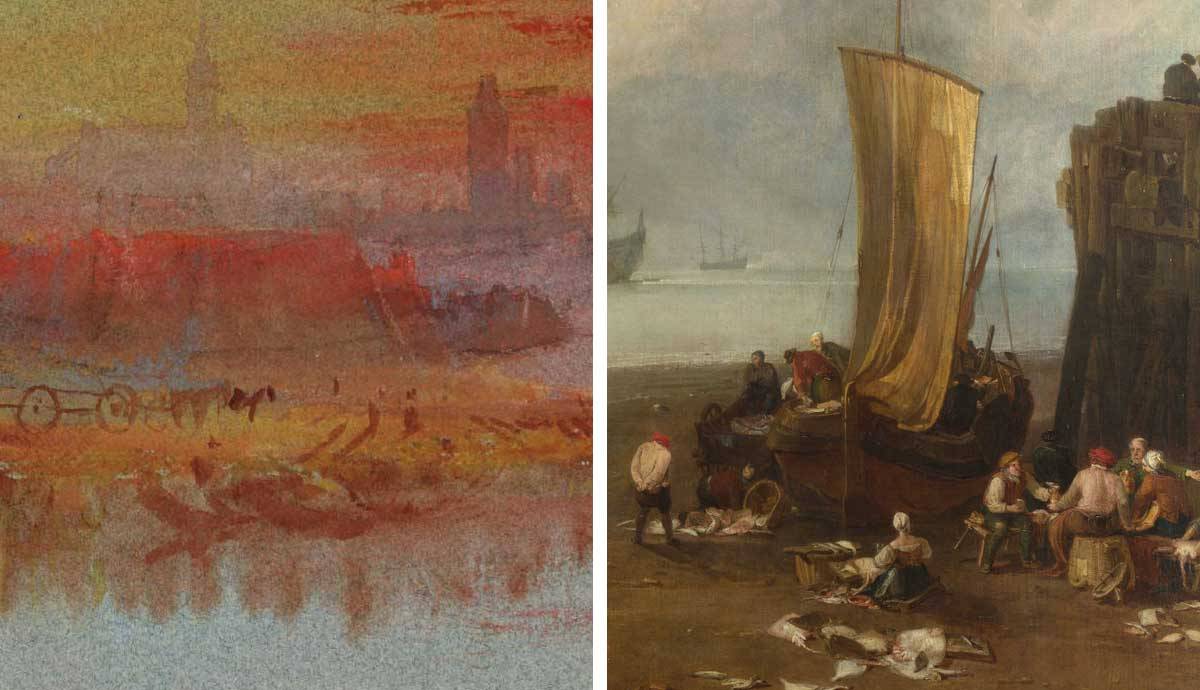 Joseph Mallord William Turner (1775-1851) was an English painter who is celebrated for transforming the rigid traditions of British landscape painting. This famous artist left behind an exceptionally large collection of artworks that include dramatic landscape paintings, watercolors, and sketchbooks. In this article we will guide you through the fascinating life and unusual artistic techniques of the great J. M. W. Turner.

Joseph Mallord William Turner was born in London in 1775, where his father ran a barber shop near Covent Garden. As a child, his talent was obvious. His earliest drawings caught the attention of his father’s barber shop customers, many of whom paid a few shillings apiece for one of the young artist’s artworks. By age fourteen, Turner entered the prestigious Royal Academy of Art to study painting.

Recognizing his potential, Turner’s father retired from his work as a barber and spent the rest of his life supporting the business side of his son’s career. Fisherman at Sea was the first oil painting turner exhibited at the Royal Academy—a moonlit maritime painting depicting a small boat caught in dark, choppy waters. Contemporary critics were impressed with Turner’s work, setting the course for his reputation as the most acclaimed English painter of his generation.

Turner gravitated towards landscape painting from the start. He was always interested in dramatic scenes, but his earliest works demonstrate an adherence to the dominant style of English landscape painting. These late-18th-century and early 19th-century paintings are more classical and calm than his most iconic compositions.

The English landscape tradition was characterized by realistic, illustrative depictions of landscapes, ancient ruins, and charming towns. Landscape painters often attempted to render the scene through the objective lens of a tourist. Soon, Turner would dramatically deviate from this style, exploring more dynamic subjects and a more expressive, emotional painting style.

Thanks to his early success and financial independence, Turner had the resources and freedom to travel extensively through Europe and experiment freely in his artistic practice. He discovered a dramatic variety of landscapes and became interested in bright colors, wide atmospheric brushstrokes, and intense subjects like storms, shipwrecks, and fires. The English painter also became more interested in exploring the aesthetic potential of light and fog as subjects in their own right.

The Sublime Beauty of Destruction

The turbulent drama of J. M. W. Turner’s work was inspired not only by his own wild imagination—it was also inspired in part by real-life natural disasters that the English painter witnessed. In 1816, the eruption of Mount Tambora in Indonesia triggered the notorious “Year Without a Summer” due to extremely high levels of ash in the atmosphere. That year, sunsets were unusually dark and colorful. This inspired Turner’s recurring interest in the subject of sunsets. He used oil paint and watercolor to dramatize and abstract the colors, forms, and textures he observed and imagined.

Later, in 1834, the artist also witnessed the burning of the Palace of Westminster, which was home to the British Parliament in London. The disaster quickly escalated into one of the largest fires London ever experienced. The flames raged all night long, destroying most of the medieval architecture. Turner painted this event as he observed it—with swaths of orange fire and plumes of dark smoke illuminating and obscuring the River Thames by night. This experience, and the resulting series of art it inspired, shaped the English painter’s ongoing interest in the sublime beauty of destruction.

The difficult technical skills required of a great academic artist came naturally to J. M. W. Turner during his time as a student at the Royal Academy of Art. He mastered draftsmanship and watercolor painting, the latter of which was especially difficult for many students. These skills lay a solid foundation for Turner to develop his unique style and aesthetic approaches to art over the course of his long career.

The English painter extensively used sketchbooks, dozens of which are still available for historians to study. Turner used them to record observations and first impressions, make preparatory studies, practice copying works by the Old Masters, and experiment with colors and materials. Thousands of pages of Turner’s sketchbooks remain preserved for historians and museum visitors, providing fascinating insight into the inner workings of J. M. W. Turner’s artistic mind as he developed his signature style.

J. M. W. Turner was widely considered to be the most accomplished watercolorist in England during his lifetime. The English painter believed that watercolor, even more so than oil paint, had the potential to accurately convey emotions and mood above illusionistic details or narrative information. His watercolor skills ensured his financial independence from the start of his career, as coloring the black-and-white drawings of architects was a lucrative job.

Turner was never afraid to experiment with pigments and other materials in his oil painting and watercolor painting. The English painter obstinately remained more interested in formulating paints that looked a certain way when he was using them, and he paid little regard to what happened next. Unfortunately, many of Turner’s experimental formulations did not stand the test of time, causing the original colors of his paintings to quickly fade. In the years since, this has presented an ongoing challenge to conservationists of J. M. W. Turner’s work.

As opposed to the focus on logic, reason, and morality in the Enlightenment and Neoclassical movements, Romanticism prized the power of emotion and the sublime supremacy of nature over humanity. Creators and thinkers in the movement interpreted these values in a wide range of ways. Generally, Romantic artists like J. M. W. Turner were more interested in experimenting with expressive color than they were in perfecting their forms and idealizing their subjects. Turner also embraced the sublimity of nature, relishing in the moments of overwhelm—or even terror—that nature creates. Turner believed those moments were intensely beautiful and worth capturing in paintings.

Turner is also considered to have laid much of the groundwork for abstract painting, which wouldn’t become mainstream until the next century, by favoring the formal details over the representative components. His later works indeed approach total abstraction, with washes of atmospheric colors almost entirely overpowering the actual scene depicted. Turner’s boldness in questioning and transforming tradition is an important part of his lasting legacy.

As J. M. W. Turner grew older, he became increasingly eccentric and reclusive. Towards the end of his life, his father was one of his only close friends, and the two lived and worked together for thirty years. After the death of his father, the English painter experienced depressive episodes, poor health, and professional setbacks until his own death in 1841.

M. W. Turner bequeathed all his finished paintings to the British nation with the intention that a special gallery be built in London to permanently exhibit them all together. Over twenty years after Turner’s death, no agreement upon a site for a new gallery had been reached. Contrary to Turner’s original request, the British Parliament finally authorized the distribution of paintings to other institutions outside of London. The largest collection of Turner paintings, as well as hundreds of unfinished works and sketches by the English painter, are permanently on view in a special wing at the Tate Britain Gallery in London.

According to institutions like the Royal Academy, there was a strict hierarchy of art during J. M. W. Turner’s lifetime. This hierarchy did not value landscape painting very highly in comparison to history painting and portraiture. However, Turner’s illustrious career elevated the tradition of landscape painting to a more prestigious status, inspiring a resurgence of interest among artists and collectors alike in landscape art.

Turner’s later works—where objects are barely discernible and light and color became de facto subjects—influenced avant-garde artists across Britain and beyond. In France, the Impressionist artists, especially Claude Monet, religiously studied Turner’s work and techniques in developing the Impressionist style. Today, the work of J. M. W. Turner still resonates with museum-goers for its approach to landscape that feels as cutting-edge and uniquely emotional as it did nearly two centuries ago.