David Hume was not the first person to study human nature. Nonetheless, his empiricist approach to it has been exceptionally influential. 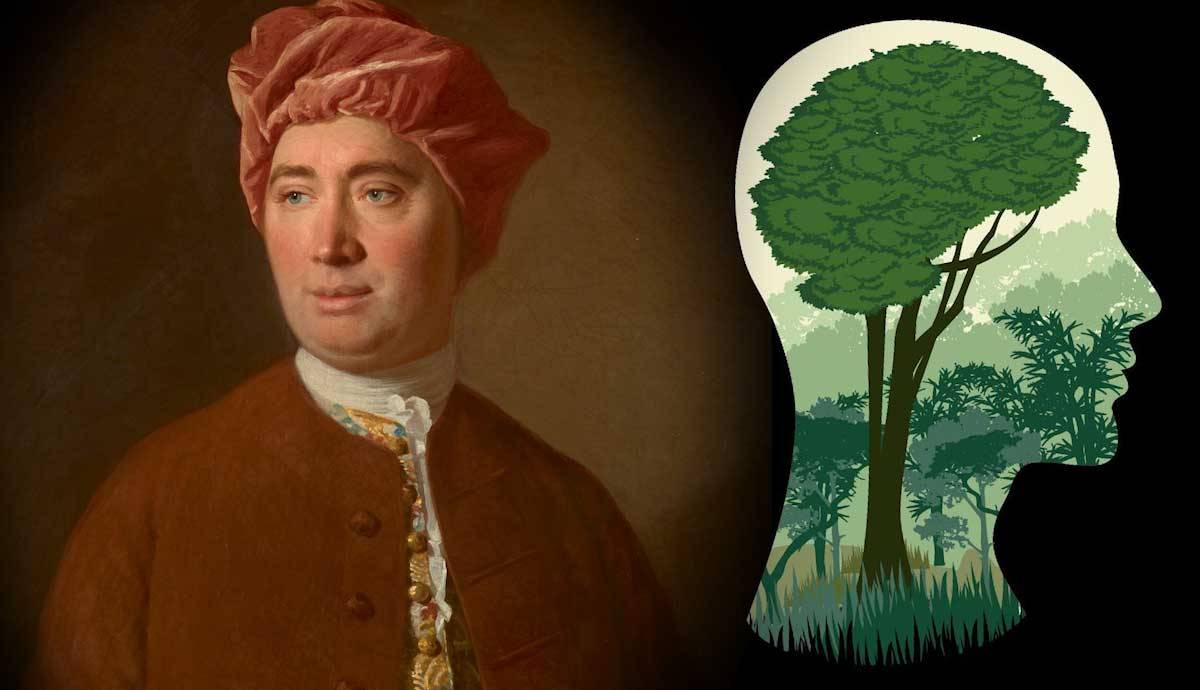 David Hume believed that philosophy – both the philosophy of his day, and philosophy in general – had neglected the study of human nature and neglected to give an account of it adequate both to keeping up with the natural sciences and to make genuine progress, founded on more than the rhetorical or intuitive appeal of unfounded systems. In this article, we will dive into what an empiricist theory of human nature looked like for one of history’s most important philosophers.

Before studying his approach to human nature, it is worth saying something about David Hume’s influence and his biography. Hume’s place in the history of philosophy is assured by his enormous influence on his philosophical successors, most famously and most important Immanuel Kant. But Hume’s influence on later scientists is less well known – Charles Darwin credited him substantially for inspiring the theory of evolution – and it speaks to Hume’s enormous regard for the empirical sciences.

It also, arguably, speaks to a deeper intellectual current in Hume’s work – a tolerance for uncertainty, and even absurdity, when one’s evidence or one’s instruments are limited, and an investigation is not fully complete. These are features of Hume’s work in spite of various changes undergone between his first work, the Treatise of Human Nature, and his later Enquiry Concerning Human Understanding. For a philosopher who has acquired a reputation for the negative, critical emphasis of his thought, this aspect of his work – which is central to understanding his approach to human nature – stands out as a mark of his regard for progress as a necessary component of intellectual activity.

Hume did, nonetheless, take an extremely critical view of the philosophy of his time. This iconoclasm is, in some ways, surprising given his relatively conventional upbringing. He grew up in a reasonably well-off household in the Scottish Lowlands, was identified early on as a precocious youth and was subsequently sent to study at one of the ancient Scottish universities (Edinburgh), where he was by all accounts given an education very much in the classical tradition, with some scientific and mathematical study thrown in.

2. Hume Was Constantly Accused of Heresy

If we are to look for biographical answers for Hume’s dissatisfaction with some of the intellectual currents of his time, it is because they were not especially tolerant of his views. That is, Hume was constantly dogged by suspicions concerning his religious beliefs. Although he substantially altered the published text of the Treatise and was regularly advised by his friends to dampen down publicizing his more controversial views of religion, Hume’s career was regularly harmed by the perception that he was an atheist.

He was removed from a post at the University of Edinburgh – and forced out of academia altogether – due in large part to protests raised by the views expressed in the Treatise, and he was almost removed from his later role as a librarian for requesting ‘indecent’ books. In other words, although Hume today is often taken to exemplify many philosophical intuitions held by English speaking philosophers, at the time in which he wrote he was a self-consciously radical thinker.

All of this gives Hume a vantage point to speak his mind about the state of philosophy. Hume begins his Treatise with the observation that, even to those outside the academy, the amount of disagreement among philosophers was abnormal and striking given the relative speed of progress made by those working in the natural sciences.

3. Hume Believed That Philosophy Should be Modeled After the Natural Sciences

Hume’s main explanation of this is that philosophy remains both speculative and system-oriented, focused “more upon Invention than Experience”, assuming too much and attending to actual experience too little. According to Hume, natural scientists have successfully moved beyond the creation of “hypotheses and systems” as the model for knowledge, and what they have lost in systematicity and completeness they have regained in steady, unyielding progress.

Hume therefore approaches the philosophical environment in which he emerged critically and finds little worth salvaging in the history of philosophy either. As much as Hume dislikes the speculative approach taken by ancient philosophers – and feels modern philosophers have replicated the mistakes of the ancients – this is an approach to prior philosophical work which finds its origins in Greek philosophy.

Most significant Greek philosophers would, towards the outset of their major works, criticize all that came before them not as merely wrong, but preferably also muddled and internally incoherent. What sets Humes standpoint apart is that he has an already existing alternative model for philosophy in mind, namely that of the natural sciences. This is a view which will crop up again and again in an astonishing range of philosophical projects, from Karl Marx’s ‘scientific’ approach to political economy to W.V.O Quine’s famous quip that ‘philosophy of science is philosophy enough’, given Quine felt philosophy at its best was not just like a science but an extension of science.

Hume might seem to deny the role of creativity in philosophical enterprises. The most extreme version of an empiricist skepticism about the role of creativity in philosophy would hold that, whatever knowledge we can gain through experience, we cannot represent that knowledge. One way of putting that claim would be that we cannot say what we know, because knowledge is not a function of language, but a function of our perceptive faculties. Yet, because Hume is not a sceptic about philosophy itself, just the way it has been undertaken so far, he cannot be understood as a sceptic in this sense.

Indeed, Hume is not purporting to shut down philosophical enquiry, but arguing that it needs to take its first tentative steps in a less systematic direction. As Jonathan Rée writes:

“The main lesson of the Treatise was that the dogmatisms of the past are no longer viable and should be ditched in favor of skepticism – not the extreme skepticism associated with certain ancient philosophers, but a diffident skepticism based on ‘Humility, with regard to the operations of our natural faculties”.

This humility is arguably the definitive feature of Hume’s approach to human nature, because it is a consequence of Hume’s empiricism. Hume understands all knowledge to be derived from the senses, our simple ideas are qualitatively the same as such perceptions, and the complicated ideas – which provide the structure of human nature – are developed from those simple ideas.

4. An Empiricist Philosopher Should Start by Studying Human Nature

Because Hume understands the study of human nature to be the essential task for philosophy to undertake, it is arguably the definitive feature of his philosophy in general. For Hume, the fundamental material of our mental life is sensation and ideas which are qualitatively of the same kind as sensation.

For Hume, one of the most relevant things about human nature as constituted by sensation and ideas derived from sensation is that it is always changing. A number of questions arise from this view, many of which have only been raised by some of Hume’s 20th century interlocutors, particularly Gilles Deleuze in his first monograph, Empiricism and Subjectivity. First of all, if the material of our mental life is not formally consistent, how do we come to impose structure on it (isn’t our awareness of it, the kind of abstract categorization that goes into distinguishing impressions or sensations from other aspects of our mental life, the imposition of a surprising degree of structure? Do sensations and impressions relate to one another in a consistent way, and is this what abstract thought maps onto?

5. Some Have Criticized David Hume’s Empiricist Attitude Towards the Mind

One of the major criticisms of empiricism in the philosophy of mind is that it might offer too limited a picture of thought. That is to say, it offers us a reasonable account of how the most basic thought, defined in the widest sense, is a process insofar as you can distinguish something like the raw material of thought from its conclusions – judgments – last analysis – where thought comes to rest.

Reality of thought is not as thought is presented to us and requires analysis. To claim that all knowledge comes through the senses is this – the criterion of judgment is the criteria of the raw materials (sensation) of thought and the processing of that material (relations). If somebody asks me for a reflective judgment – to take time, to turn it over in my mind – and then asks me how I came to such a judgment, what could I say to them? At a bare minimum, we appear to have judgments which appear more secure for being the product of reflection – thought may not rest anywhere in total security, yet certain processes of thought develop in non-trivial ways given the passage of time, the opportunity time presents for thought to undertake certain kinds of organic progression.

Further questions arise about the organization of thought under an empirical model of human nature. One such question is that of second order perceptions, our ability to make internal perceptions. If we model thought as not just a thing which is always changing, but as a thing which is often progressing – even if not towards knowledge, and even if we don’t know exactly why – a second question emerges. Where does thought begin? One answer to this, which is a certain kind of empiricism, holds that the raw material of the process of thought are impressions, or what our senses tell us immediately.

Following through the implications of this might involve a thorough analysis of the recursive dimension of thought – of the ways in which we have impressions of our own thought, and an assessment of how we stand back from ourselves, yet simultaneously cannot escape certain confines of subjectivity. How we describe this relationship seems critical to any philosophy of mind, any metaphysics, and any approach to ethics and politics which expects to stand up to a range of more abstract criticisms.