7 Former Nations That No Longer Exist

Here is a list of 7 former nations that have ceased to exist in the modern era, as well as the fascinating histories of their rise and fall. 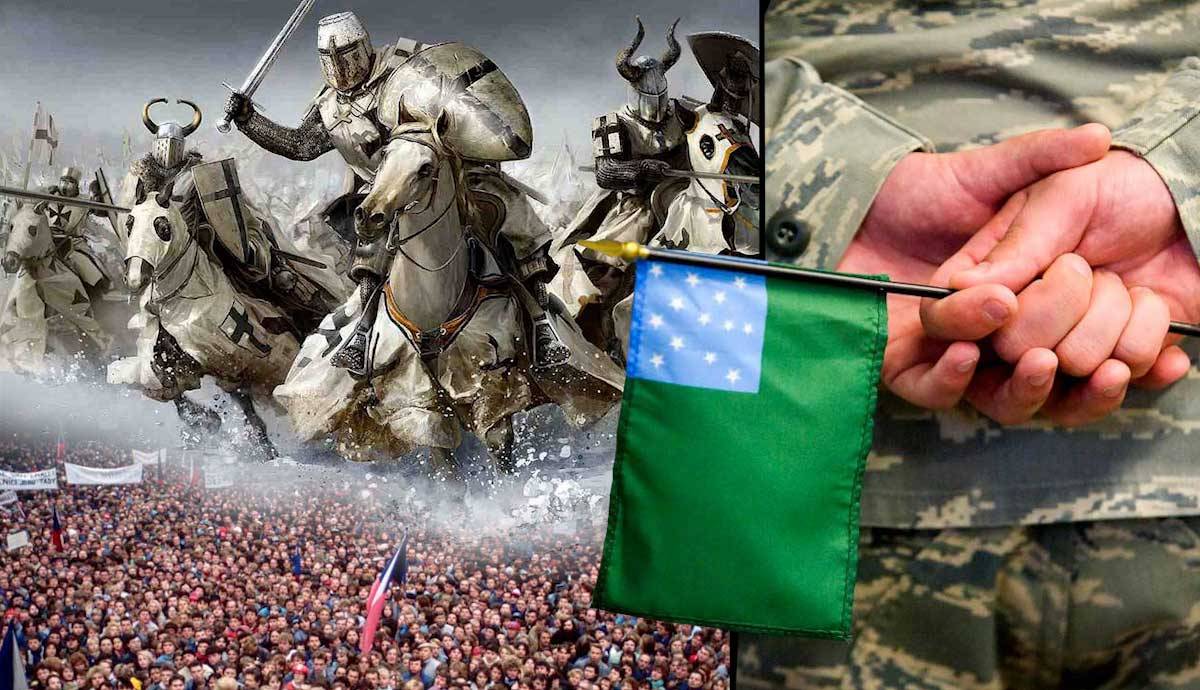 History is a dangerous and fickle place. Small, harmless nations have risen to immense power, commanding military and diplomatic influence over all their neighbors. Empires that once spanned the known world, and the entire globe, once mighty and seemingly invincible, have been reduced to tiny shadows of their former selves. And many nations have disappeared altogether, some being remembered for their significant effect on human civilization, and some are barely a footnote in history books. Here are 7 examples of former nations that once existed as sovereign states but are no more.

1. The Former Country of Prussia

During the 19th century, the Prussian Empire was a powerhouse of military might on the continent of Europe. It is regarded as one of the most influential former countries on the European continent.

The origin of the Prussian state began in the 13th century when the Teutonic Knights, a German order, claimed possession of a significant portion of territory on the Baltic coast in what is present-day Poland. After waging war with and losing to Poland, Prussia became a Duchy and a vassal of Poland.

After its ruler failed to produce heirs, the Duchy of Prussia passed into the hands of Brandenburg, which was a fief of another former nation: the Holy Roman Empire. During this time, Brandenburg and Prussia were ruled as one, and in 1701, Elector Frederick III elevated the Duchy to a kingdom and crowned himself Frederick I. In the 18th century, Prussia underwent massive growth in the economy, population, and military prowess, fighting many wars against Austria and annexing territory.

During the Napoleonic Wars, Prussia suffered a crushing defeat at the Battle of Jena-Auerstedt, and the Kingdom of Prussia was added to the list of French conquests. After the Russians defeated the French, Prussia rebelled against their French overlords and reasserted itself, playing an instrumental part in the final defeat of Napoleon.

In 1871, under the guidance of Otto von Bismarck, Germany was unified, and Prussia was subsumed into the greater German Empire. Until 1945, Prussia existed as a state within Germany. After the defeat of Germany in World War II, most of what was originally Prussia was ceded to Poland, and Prussia ceased to exist altogether.

Although only independent for under a decade, from 1836 to 1846, this former nation represented a sizable geographic chunk of North America and played a significant part in the history of the United States, Mexico, and the Spanish Empire.

Texas began its colonial life as a territory of Spain. During the Mexican War of Independence (1810-1821), Texas managed to inflict a series of defeats on Spain and, deciding to go it alone, declared independence on April 1, 1813. However, independence would not last long, and just four months later, on August 18, the Texans suffered a crushing defeat. Only six years later, however, Texan attempts for independence were renewed, but they were put down by Spain.

In 1821, Mexico, along with its Texan territory, gained its independence from Spain, but issues soon flared up between Texas and the Mexican government over the outlawing of slavery. By 1834, Americans in Texas outnumbered Mexicans, adding fuel to the revolutionary fire, and in 1836, Texas declared independence again. It was during this time that the famous Battle of the Alamo was fought, in which a few hundred Texans fought to the death against an army of thousands of Mexicans.

During its ten years of existence, the country was in a constant state of war not just with Mexico but with Comanche tribes which intensified the rivalry between the two main political factions in the new country. One faction advocated for westward expansion and pacification of the Native Americans, while the other sought more peaceful relations with the Native Americans and unification with the United States. Finally, on December 29, 1845, Texas was annexed by the United States after a popular vote on the matter in Texas found that the majority supported the move.

The former country of Yugoslavia had a short and bloody history.

In the late 17th century, the idea of a single nation uniting all the South Slavic people was born, but it wasn’t until the aftermath of the First World War that this was realized. Serbs, Croats, and Slovenes were united into one nation known as “the Versailles State.” It wasn’t until 1929 that the government officially started using the name “Yugoslavia.”

In 1941, Yugoslavia was invaded by Nazi Germany, and after just 11 days, the country was conquered. The Nazis split it into its component regions and set up Croatia as a fascist satellite state.

In 1945, after the defeat of the Nazis, Yugoslavia was reformed. Under communist Marshal Josip Broz Tito, this former country was modeled on the structure of the Soviet Union. Six Socialist Republics made up the country. Yugoslavia, however, remained independent and outside the Soviet sphere of influence due to the strong leadership of Tito.

After Tito’s death in 1980, the country went into a slow breakup as ethnic tensions rose within the constituent states. By 1991, tensions had reached a boiling point, and the country descended into a decade-long war that saw severe war crimes. Today, the independent regions and countries that made up Yugoslavia are Croatia, Serbia, Bosnia and Herzegovina, Kosovo, Montenegro, and Slovenia.

Unlike the 13 colonies that united to form the beginning of the United States, Vermont existed as a separate entity. This former nation declared its independence in January 1777, but the Continental Congress did not recognize its independence due to conflicting claims over territory with New York. As such, Vermont remained outside of the United States.

Although many of its citizens fought against the British during the Revolutionary War, the Republic tried to rejoin the British Empire by offering to join the Province of Quebec. British terms were generous, but after the defeat of the British at Yorktown in 1781, it was clear that the way forward for Vermont would be as part of the United States. On March 4, 1791, Vermont became the 14th state with overwhelming support from both Vermont and the United States Congress.

Czechoslovakia was a country born out of the disruption of the European order after the surrender of the Central Powers at the end of the First World War. As one of the successor states of the former Austro-Hungarian Empire, the new Czechoslovak Republic contained some of the most industrialized lands of the former nation.

The Czechoslovak Republic lasted in the same form from 1918 to 1938 until the Nazis decided to intervene in the sovereign status of the country. In 1938, Germany annexed the Sudetenland, and the country lost the cohesion binding the regions together. Carpathian Ruthenia and a strip of Southern Slovakia were annexed by Hungary, while Poland annexed the Trans-Olza region. From 1939 to 1945, what was left of Czechoslovakia was split into the Protectorate of Bohemia and Moravia and the Slovak Republic, both under the control of the Third Reich.

After the war, the territory was under Soviet control, and as a member state of the Warsaw Pact, Czechoslovakia became a Socialist republic. This lasted until 1989, and communism collapsed in Czechoslovakia during the Velvet Revolution. The Czech and Slovak Federative Republic was born as one country, but it didn’t last long. The federation was dissolved on December 31, 1992, when the country was peacefully split into the Czech Republic and Slovakia. The split was largely due to nationalist sentiment as the Slovaks and the Czechs both wanted their own countries.

Before this independent former nation was a state of the United States, the Kingdom of Hawai’i existed as a sovereign nation and was recognized by several European countries. Formed in 1795, Hawaii was ruled as an absolute monarchy until 1840 and subsequently as a constitutional monarchy.

The country enjoyed good relations with its main trading partner, the United States, until the latter years of the country’s existence, when anti-monarchist uprisings and economic crises caused problems in governing the country. Despite trying to accept a new constitution demanded by anti-monarchists, Queen Liliʻuokalani was deposed by a group called the “Committee of Safety,” a group made up mostly of American citizens. The country briefly became a republic before being illegally annexed by the United States on July 4, 1898.

The Joint Resolution the United States Public Law 103-150 adopted in 1993 admitted that the annexation of Hawai’i was done illegally and through agents and citizens of the United States. Today, there is a considerable movement in Hawai’i to regain sovereignty.

7. The Former Nation of Gran Colombia

For 12 years, from 1819 to 1831, Gran Colombia existed as an independent state that encompassed large parts of northern South America and parts of Central America. Its total claimed territory was 2,417,270 km2 or 933,310 square miles, making it almost three times the size of modern-day Texas.

From its inception in 1819 to 1830, Gran Colombia was run by President Simón Bolívar, who remains a famous military and political figure with a legacy of independence movements throughout South America. The country was widely regarded as the most powerful nation in South America and served as an inspiration for other independence movements in territories that not only wanted to break from their colonial masters but also wanted to join Gran Colombia.

Bolivar’s dream for Gran Colombia would not live long. The government was heavily centralized, and constituent regions felt they were underrepresented. Venezuela demanded more federalization, which led to violent conflict with the government. To add to this, the country fought a territorial war with Peru from 1828 to 1829. In the end, the vision of unity was not strong enough, and Gran Colombia dissolved. Venezuela, Ecuador, and New Granada (now Colombia) were born as successor states.

The list of former nations is long and goes back to the beginning of human civilization. Some of these countries were tiny, such as Zanzibar (which joined with Tanganyika to form Tanzania), and some were absolutely massive; the Soviet Union stands out as an example of the latter. Borders are malleable, and the march of history is capricious. It is certain that, just as in the past, the future will see the creation of many new states, as well as the destruction and dissolution of many others.

Napoleon’s Downfall: The Battle of Waterloo