The Umayyad Caliphate represents not only the first dynasty of Islamic rulers but also the first patrons of some unique examples of Islamic art. 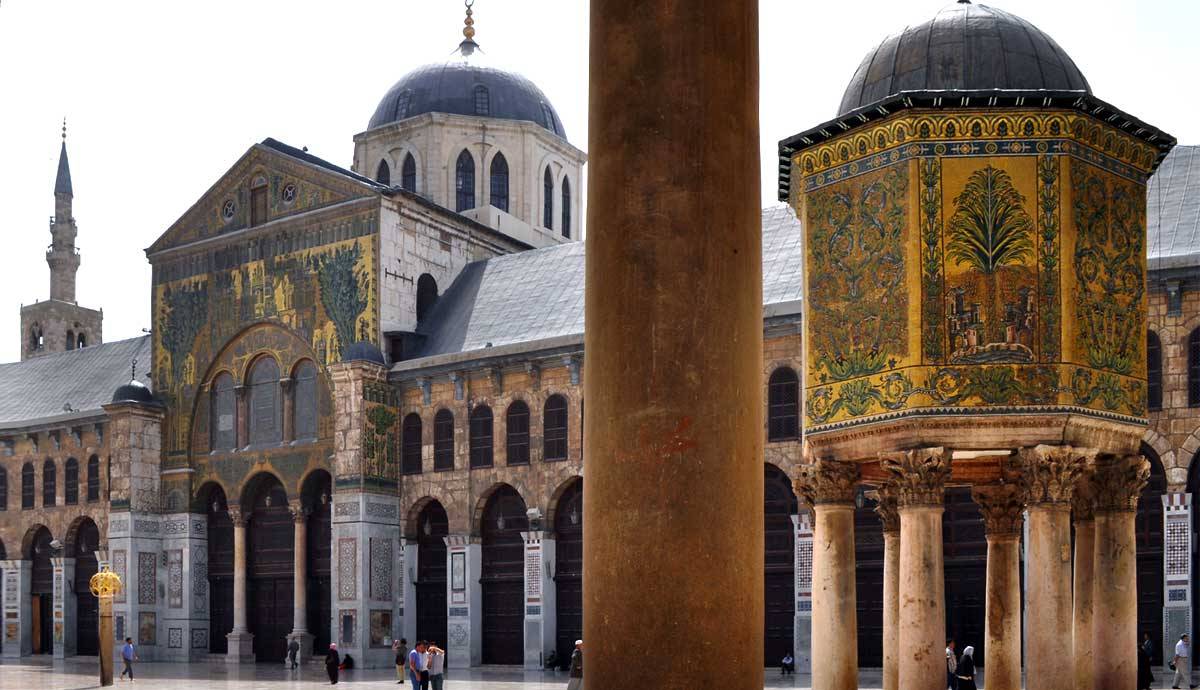 After the death of ‘Ali, the fourth caliph of the Rashidun Caliphate, in 661, Mu’awiya, the governor of Syria, founded the Umayyad Caliphate. The Umayyad dynasty further expanded the territories in the East and West, holding the lands from Spain to the parts of the Indian subcontinent. They stabilized and centralized their realm, led more or less secular lives, and developed a unique Islamic art tradition. Internal divisions and civil wars weakened the Umayyad’s control over the vast Caliphate. In 750, they were overthrown by a rival Arab faction, which established the Abbasid Caliphate. The Abbasids showed no mercy to their predecessors, killing the surviving members and destroying the graves of already dead ones. Abd al-Rahman I, the only survivor, fled to Andalusia in Spain, where he formed the Emirate of Cordoba in 756. Here’s a look at the art and architecture produced during the reign of the Umayyads.

According to tradition, Jerusalem is where the Prophet Muhammad ascended to Heaven mounted on the winged horse al-Boraq. On this nocturnal voyage, Muhammad met Allah. The place of his ascension was on the Temple Mount or the Haram al-Sharif, where the remains of the Second Temple stood and where the Dome of the Rock was later built.

The Dome of the Rock is the third-most important holy place in Islam. It was built by the early caliph Abd al-Malik in 691. The plan of the Dome of the Rock is based around a central dome resting on a circular drum supported by an arcade. This inner arcade is enclosed by an outer octagonal one, and a solid octagonal wall supports the shallow roof around the dome. Several forms of decoration are used on the building, including mosaics, marble, metalwork, and colored glass. The mosaics are particularly important examples of the combination of Sassanian and Byzantine motifs, a characteristic of early Islamic art. Another important feature of the mosaics is that they carry an inscription dating the building to 691.

The other building on the Haram al-Sharif, Al Aqsa, is the principal mosque of Jerusalem. In the time of ‘Umar, a mosque was hastily built on the site and later replaced during the reign of the Umayyad caliph al-Walid. Though the al-Walid mosque was destroyed by an earthquake and later rebuilt by the Abbasids, it recalled the arrangement of Byzantine churches, such as the Church of the Nativity in Bethlehem.

The Great Mosque of Damascus

From Mu’awiya’s rule, the capital of the Umayyad Caliphate was in the city of Damascus, conquered by Muslim Arabs in 636. Since its conquering, Arabs made it one of their first great cities with a growing population of Muslims. The early 8th-century caliph al-Walid built a mosque in the center of the capital with great care for the rights of cities Christian inhabitants (who prayed in the same building).

The Great Mosque of Damascus was constructed on the layers of temples built by preceding religions, including a Roman temple and the Christian church of Saint John the Baptist. The Roman temple wall and spolia of the church were reused in the mosque. It is a typical hypostyle mosque with a prayer hall and a large open courtyard with a fountain for ritual washing before prayer. The courtyard contains a treasury and a structure known as the Dome of the Clock. The mosque’s minarets were built over previous Roman-Byzantine towers and are probably the earliest minarets in Syria. The prayer hall takes its form from Christian basilicas with a dome ending with the qibla wall and a mihrab.

The golden mosaics, with their representations of architecture and plants, have their origins in Mediterranean artistic tradition. Their interpretation is disputed to be either a Quranic description of Heaven or the local landscape.

The Secularization of Islamic Art

The term khalīfah in Arabic means the “successor”; in this case, the successor of the Prophet Muhammad was the highest title one could hold in the Islamic world. Thus, the title of caliph entailed certain responsibilities. Caliphs were expected to carry out the duties of Muhammad, excluding his prophetic work. They were both religious and secular leaders, leading believers in prayer and warriors into battle.

Though officially carrying the title of khalīfat allāh, “the deputy of God,” the rulers of the Umayyad Caliphate, save a few, led more secular lives compared to their predecessors. This change can be seen thanks to the Muslim adaptation to a new kind of urban life. After the middle of the 7th century, Arabians, who were used to a nomadic life in the desert, found themselves in great cities in the lands they conquered. The political and social shifts significantly contributed to new secular Islamic art in the lands conquered by the Umayyad Caliphate. New palace architecture and art arose in Syria and Iraq thanks to the accumulated wealth, workers, and intellectuals. For the first time, caliphs took the initiative in artistic patronage, and their new palaces and residences became the centers of artistic production. The Qusayr ‘Amra in Jordan and Qusayr Hisham in Palestine are counted among the prime examples of secular art in the Umayyad Caliphate.

After the death of al-Walid, his successors’ most ambitious artistic and architectural achievement was the building of the so-called desert castles. These imperial or aristocratic residences, used as hunting lodges, rural residences, and palaces, expressed the authority and status of the rulers Umayyad Caliphate. As such, they are a great example of Islamic and Umayyad secular architecture and art.

Built for al-Walid II, Qusayr ‘Amra in Jordan is a unique example of Islamic building decoration and Umayyad culture. Qusayr ‘Amra is one of the earliest Islamic bathhouses. It comprises three main parts: a hall or undressing room, three heated rooms, and a well-house to the north. Inside the building, the walls and ceilings are decorated with a remarkable series of frescoes, including depictions of bathing women, a series of royal portraits, a hunting scene, and the zodiac. Although the choice of images is certainly Umayyad, the style of painting and the design of the bathhouse is purely Byzantine. The zodiac representation is the earliest surviving example of a domed representation of the stars and is of fundamental importance to the history of science.

Another aspect of Umayyad innovation in Islamic art can be seen through the production of coins during the dynasty’s rule. Through minted coins and beyond grand architecture, Umayyad caliphs showed their own sense of identity or what they saw fit to project publicly as their identity.

The distinctive Islamic aniconic and epigraphic coins were an Umayyad innovation after 696. The image of the ruler, which had been common for all Middle Eastern coinage for centuries, was replaced with the Arabic statement of the faith and citations from the Qur’an. Up to Abd al-Malik’s currency reform in 697–99, mint workers went on producing more or less the same coins they had created for their earlier rulers, whether Sassanid or Roman. A good example is the so-called Arab-Sassanian coin, with designs from earlier Sassanian coinage but with added inscriptions in Arabic.

At the beginning of the 8th century, growing examples of the Islamic epigraphical types represented a clear case of intervention by the Arab ruling elite, probably by the caliph himself. For the first time, caliphs took initiative in a question that concerned, among much else, artistic patronage. From this time, the coins represented what the rulers had specifically requested rather than what they had inherited.

The Umayyad Caliphate in Europe

When ‘Abd al-Rahman III proclaimed himself caliph and the only true successor of the Prophet in 929, al-Andalus became one of the most important artistic and intellectual centers in Europe. Following the artistic and cultural exploits of their ancestors of Damascus, they enriched the already existing Spanish pre-Islamic patrimony and built their own visual and iconographic identity. The Andalusian Umayyad’s identity invoked the authority of the Rashidun caliphs; they modeled themselves as the most learned rulers since Hellenistic times and claimed to be the heir of the Roman and Hispano-Visigoth legacies. They promoted the sciences and the arts, surrounding themselves with scholars and taking care of the future princes’ education. All of this contributed to the masterpieces of al-Andalus, the palace city of Madinat al-Zahra, and the Great Mosque of Cordoba.

The history of the Great Mosque of Cordoba started as a temple to the Roman god Janus, converted into a church by invading Visigoths in 572. After the descendants of the exiled Umayyad Caliphate came to Spain, they completely rebuilt the building and converted it into a mosque. The building was extended over the following two centuries after Prince Abd al-Rahman I, the first ruler of the Umayyad Caliphate in Spain, died in 788. It is comprised of a large hypostyle prayer hall, a courtyard with a fountain in the middle, an orange grove, a covered walkway circling the courtyard, and a minaret that is now encased in a squared, tapered bell tower. The prayer hall seems magnified by its repeated geometry. Above the lavishly decorated mihrab is a dome built of crisscrossing ribs that create pointed arches covered with gold mosaic in a radial pattern.