The medieval artwork of Norman Sicily includes aspects of Romanesque, Byzantine, and Islamic traditions. It reflects the incredible cultural diversity of the island in the 12th century. 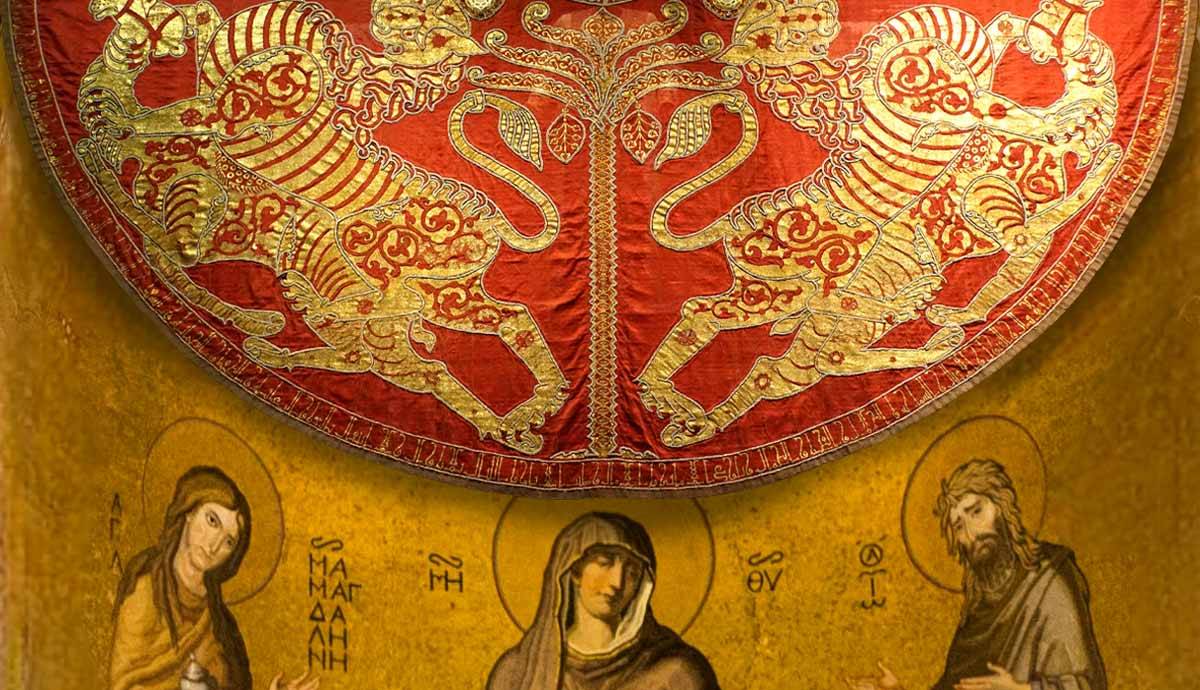 Sicily is a triangle-shaped island in the Mediterranean, just off the southeastern tip of Italy. It had an ever-changing leadership during the Middle Ages, variously in Byzantine and Islamic control before being conquered by the Normans in the late-11th century. For the next millennium, three successive kings of Norman Sicily made the island a remarkable cultural and artistic melting pot, where people from diverse faiths and backgrounds could live together in relative harmony. The medieval artwork of Norman Sicily combined Romanesque, Byzantine, and Islamic attributes into a unique style of art and architecture.

Located in a key position for Mediterranean travel and trade, Sicily fell under Byzantine or Islamic control at various times during the earlier Middle Ages. This made the area culturally rich but politically ripe for the taking. Originally arriving in the area from France as mercenary soldiers for the various powers fighting over this territory, the Normans effectively ruled Sicily by 1091 CE.

They were led by two brothers from a minor branch of the Norman aristocracy. The older brother, Robert, claimed former Lombard territories on the southern Italian peninsula, including Apulia and Calabria, while younger brother Roger ruler Sicily. Roger I’s son, Roger II (r. 1130-1154) became the first Norman King of Sicily, ruling over both island and mainland domains from his island capital at Palermo. His son William I (r. 1154-1166) and grandson William II (r. 1166-1189) succeeded him to the throne. Norman Sicily fell to the Hohenstaufen, a Swabian dynasty from Germany, in 1194, and Sicily became part of the Holy Roman Empire not long afterward.

The Norman rulers of Sicily had the same origins as the Normans who conquered England in 1066. Originally from Scandinavia — their name comes from the term “Northmen”, though we might think of them as Vikings — the Normans settled in modern-day France and lent their name to the Normandy region. From there, they continued their pattern of migration, conquest, and assimilation elsewhere in Europe. However, there was no Sicilian equivalent of the Battle of Hastings. The Norman conquest of Sicily and southern Italy occurred much more gradually, slowly unifying an area that had not been previously held by the same rulers.

Because of its location in the Mediterranean, Sicily was within easy reach of Italy and Tunisia, and it was also accessible from the Byzantine Empire, Fatimid Egypt, and Islamic Spain. Add that to its history of Byzantine and Islamic rule, the latter of which had been tolerant of a diverse populace, and Sicily already had an unusually varied cultural and religious landscape even before the Normans brought their northern traditions into the mix.

The Normans were Latin (Catholic) Christians, but most of their Sicilian subjects were either Greek (Orthodox) Christians or Muslims. The island had established Jewish and Lombard communities as well. As rulers from a cultural and religious minority, the Normans recognized that fitting in would benefit them more than trying to force the existing inhabitants to adapt. This idea of assimilating into an existing society paralleled what the Normans did in France, England, and elsewhere. They also recognized that cultural groups brought different strengths to the mix, employing the greatest scholars and bureaucrats from various backgrounds.

Norman Sicilian society was muti-lingual, with Latin, Greek, Arabic, and French all being used in official business. By doing so, the Normans briefly created a prosperous, relatively harmonious multi-cultural Sicily at a time when the Greek church, Latin church, and Islamic empires were all fighting each other elsewhere.

The remarkable cultural fusion of Norman Sicily was in full display in its medieval artwork. In particular, art and architecture commissioned by the royal family blended the Romanesque style of the Norman north with elements of Byzantine and Islamic art. By employing local aesthetics and using local craftsmen in their artistic commissions, the Kings of Norman Sicily positioned themselves as legitimate rulers rather than foreign invaders. Remember that Byzantine and Islamic medieval artwork were the height of fashion and luxury at this time; importing and emulating it signified high status.

The material culture of the island, exemplified by the luxurious red silk, gold, pearl, and gemstone coronation mantle of Roger II, used copious amounts of Arabic script and Islamic motifs. The Norman court employed artists from diverse ethnic and religious backgrounds to produce such objects in Palermo, but they likely also imported pieces like ivory boxes. Painted or carved with Islamic-style bird and plant motifs, these were luxury objects in the Islamic secular world, and Christians sometimes used them as reliquaries or other sacred containers.

Impressive though these portable medieval artworks undoubtedly are, the real treasures of Norman Sicily are its architectural survivals. Its churches pair Norman Romanesque structures with Byzantine and Islamic features, while its palaces more closely follow their Islamic peers.

Romanesque, sometimes also called Norman, was a style of architecture most popular in 11th and early 12th-century England and France. It was the direct precursor to the better-known Gothic style. Romanesque churches took the basilica form, meaning that they were rectangular, aisled halls with vaulted ceilings and a semicircular projection (apse) for the altar.

Romanesque basilicas tend to be hefty constructions, with thick walls, rounded arches, and relatively small windows high up on the walls. On their exteriors, they have imposing, fortress-like facades with two towers and a trio of arched doorways. Figurative carvings may adorn the doorways and column capitals, while more geometric carvings outline other architectural features. The churches of Norman Sicily generally follow this general plan, but they also include decorative elements you definitely won’t find in the Romanesque churches of England or France.

Inside the great churches of Norman Sicily, the walls and ceilings are covered in Byzantine-style mosaics on glittering gold backgrounds. This was also common in Byzantine-influenced Italian churches in Venice and Ravenna. Churches like the Monreale and Cefalù Cathedrals and La Martorana in Palermo, largely employ Byzantine iconographies, such as the monumental representation of Christ as Pantocrator, as well as the Byzantine aesthetic of stylized figures in flat compositions. As was also commonly seen in Sicilian and Byzantium churches sometimes include mosaics depicting the ruler. For example, Monreale Cathedral includes scenes showing William II, in Byzantine-style imperial garb, interacting with Christ and the Virgin Mary.

Romanesque churches include ample wall and ceiling space for mosaics to appear, though northern European versions do not typically include mosaics. Additionally, a few Norman Sicilian churches, like the Capella Palatina (Palace Chapel) in Palermo, include a dome — a typical site for important Byzantine iconography, though not part of most Romanesque churches. Elegant mosaics of secular subjects also appear in the palaces of Norman Sicily.

Muquarnas vaults are characteristic of Islamic architecture, particularly of mosques, but they also appear in both religious and secular structures of Norman Sicily to great effect. A muquarnas vault is a highly dimensional structure composed of many smaller cells or honeycomb shapes; the overall effect looks like a series of open niches juxtaposed in alternating rows and levels. The cells, which can be made of wood, brick, stone, or stucco, often have bright paint and intricate decoration. In Norman Sicily, that decoration might include abstract motifs and Arabic script, as well as figurative imagery. Muquarnas appears on the vaults, semi-domes, niches, and other architectural features of bother sacred and secular buildings.

Norman Sicilian architecture also makes copious use of opus sectile, or geometric patterns made from colorful inlays of cut stone, and marble revetments, which are colorful, veined-marble panels set into the walls. These techniques were popular in both the Islamic and Byzantine worlds, and they often appear on the lower walls, floors, columns, and exterior facades of Norman Sicily’s churches.

The Palaces of Norman Sicily

La Zisa and La Cuba were two pleasure palaces in Palermo, built for William I and William II respectively. Unlike the situation in church architecture, the palaces of Norman Sicily generally followed Arabic models. This is probably because the Islamic lands in Spain and North Africa already had a tradition of elegant palaces suited to the Mediterranean climate. In the north, a medieval castle would be an imposing structure designed to stay warm and secure from attack. On the arid island of Sicily, by contrast, a palace needed to stay cool but did not require as much fortification.

La Zisa and La Cuba feature much the same types of decoration that adorn nearby churches — muquarnas vaults, mosaics, and decorative marble patterning. On the outside, they appear to be simple and box-like romanesque constructions — the name La Cuba refers to its cube-like shape — but the airy interior rooms, courtyards, and water features are strategically arranged to encourage air flow, creating primitive air-conditioning effects. The Norman kings also had a large palace complex, the Palazzo dei Normanni, in the heart of Palermo.

The Medieval Artwork of Norman Sicily

The legacy of Norman Sicily’s medieval artwork survives best in its architecture today, which provide a window into the unique aesthetic of the island’s 12th-century past. Roger II’s Cappella Palatina, located inside Palermo’s larger Palazzo dei Normanni complex, is perhaps the ultimate example. It is covered in Byzantine-style mosaics on gold backgrounds, including a giant Pantocrator image; it also has colorful, Islamic-style cut marble decorations in geometric patterns, Romanesque-style figurative sculpture, and a muquarnas ceiling. The church contains inscriptions in three languages.

Along with Monreale and Cefalù Cathedrals, La Zisa, and several other churches and sites, the palace complex is a UNESCO World Heritage Site and tourist attraction. Meanwhile, smaller medieval artworks made or found in Norman Sicily appear in both the Medieval European and the Islamic departments of major art museums, reflecting their heterogeneous influences.

The medieval artwork of Norman Sicily offers proof of a cultural harmony that people rarely associate with the Middle Ages. The idea of multiple diverse religions and cultures not only living and working together peacefully but also combining to create unique and vibrant medieval artwork, is something all of us could take some inspiration from today.

The First Crusade: 5 Key Figures You Need To Know About