Islamic architecture is a centuries-old building tradition rooted in the principles of Islam that spread from the Middle East to the rest of the world. 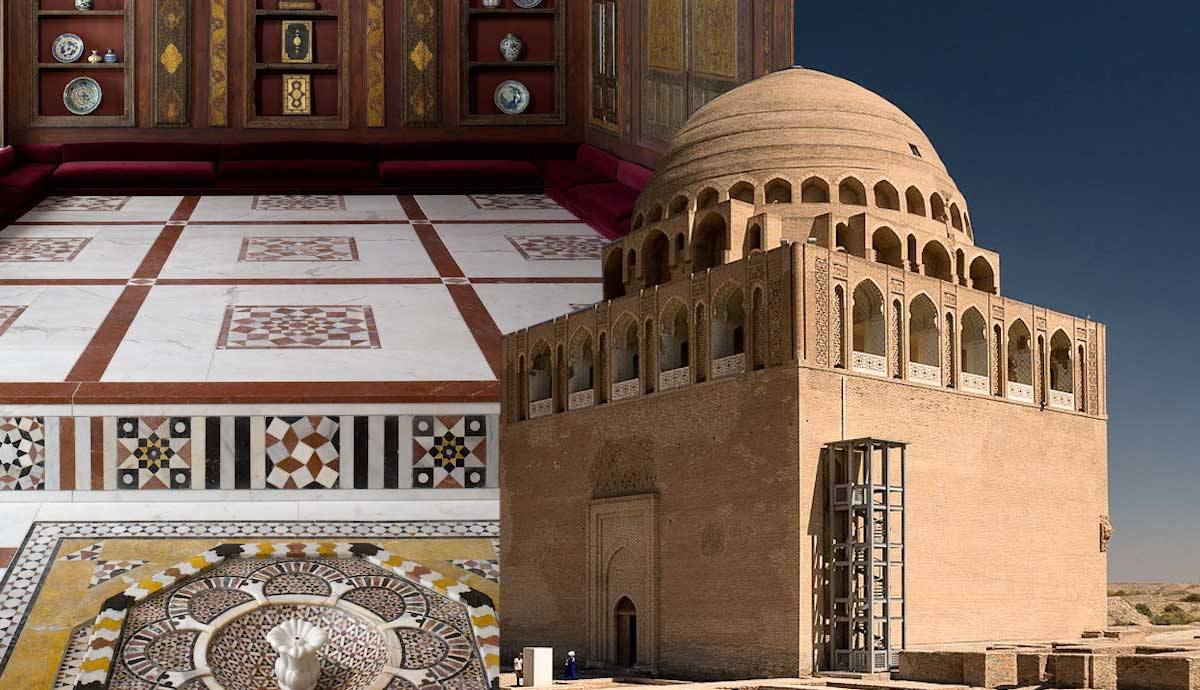 Islamic architecture is a term used for the building traditions of multiple states since the 7th century, where Islam was the main religion or a major cultural influence. Though usually associated with religious buildings, Islamic architecture encompasses fortresses, palaces, tombs, public buildings such as schools, and smaller structures such as fountains, public baths, and domestic architecture. Together with the religion of Islam, it spread from the Arabian Peninsula and the Middle East throughout the world, incorporating and influencing various cultures. With its towering minarets, horseshoe and pointed arches, muqarnas vaulting, and ornamental details, Islamic architecture brought unique contributions to the history of architecture. Following the examples of the Dome of the Rock, Taj Mahal, and Alhambra, its tradition continues today.

Just like Islamic art in general, Islamic architecture encompasses a wide range of styles, designs, and construction of both secular and religious buildings in Islamic societies. The earliest Islamic architecture was taken from existing styles and patterns of other contemporary building traditions, developing them further and contributing new elements to the history of architecture.

Not many buildings were done in the Islamic architectural style in the first generations after the prophet Muhammad’s death. The first caliphs after the death of the Prophet expanded the Islamic State beyond the Arabian Peninsula into the lands of other cultures. The stretching of the Rashidun and Umayyad Caliphates started the process of cultural assimilation, growth, and renewal of existing traditions.

Soon, an Islamic style emerged from localized Egyptian, Byzantine, and Sasanian models. This style is characterized by ordered repetition, radiating structures, and rhythmic patterns. Other significant features include columns, piers, and arches, organized and interwoven with alternating niches and colonnades. Considerable Byzantine influences can be seen in Islamic monuments like the Dome of the Rock and the Qasayr ‘Amrah baths. Sasanian Persia also had a formative influence on Islamic Art, giving legacies like the iwan (one-side open bay) and chahartaqs (domed kiosks).

Islamic temples are called mosques, or masjid in Arabic, and are used as gathering places of prayer, education, and reflection. A common feature of the mosque is an open courtyard, sahn, meant for holding a big population, and a big fountain used for ritual cleansing. One of the most recognizable aspects of mosque architecture is the minaret, a tower from which the call to prayer is announced and a visual reminder of the presence of Islam. Most mosques have one or more domes, called qubba in Arabic. They were adapted from Byzantine architecture and were a symbolic representation of the vault of heaven.

Inside the mosque, the essential element is the mihrab, a niche in the wall that indicates the direction to Mecca, towards which all Muslims pray. In Arabic, the direction towards Mecca is called qibla. Consequently, the mihrab is placed in a qibla wall, which is the most ornately decorated area of a mosque.

Soon, different types of mosques emerged. The oldest style, inspired by the house of Muhammad, was the hypostyle mosque, exemplified best in the Great Mosque of Kairouan. It is a large, rectangular mosque with a great hall supported by columns and a large inner sahn. The forest of columns that characterizes the interior defined the hypostyle type.

The 11th century saw the emergence of the four-iwan mosque. An iwan is a vaulted space that opens on one side to a courtyard. In the Great Mosque of Isfahan, each courtyard wall is punctuated with a monumental vaulted hall, or iwan. Despite still being popular in the 21st century, the four-iwan type was rarely used in the Ottoman Empire. After the Fall of Constantinople in 1453, the Hagia Sophia became a model for centrally-planned mosques. Even though these three types are the most common, there are many diverse regional styles, especially in China, Africa, and Indonesia.

The madrasa is a building that functions as a teaching institution primarily for Islamic sciences. It is assumed that the Seljuk Turks built the earliest madrasas in eleventh-century Iran. The design was derived either from contemporary house plans or Buddhist teaching structures, known as viharas, which survived in Afghanistan and Central Asia.

The oldest extant madrasa is the Gumushtutigin Madrassa in Bosra, constructed in 1136. This is a small structure with a domed courtyard and two lateral iwans. However, the majority of early madrasas are found in Anatolia, where two main types occur based either on an open or a closed courtyard building. The domed madrasas are usually smaller buildings, while those with an open courtyard are generally larger and have central iwans surrounded by arcades.

The first Egyptian madrasas date from after 1160, when Sunni Orthodoxy returned to the country. The significance of the Egyptian madrasas is the four-iwan plan, where each iwan represented one of the four orthodox schools of law. This design later spread to other countries and can be seen in the Mustansriya Madrassa in Baghdad. Another significant development that took place in Egypt is the madrasa becoming the dominant architectural form, with mosques adopting their four-iwan plan. In a later period, madrasas even provided sleeping and working accommodations for students.

One of the five pillars of Islam is the Hajj, the most well-known pilgrimage in Islam. It is considered a duty for all Muslims who are in good health and can afford the journey to Mecca. Taking place during the month of Dhu al-Hijjah, it consists of many rituals which had a hand in shaping the architecture of some of Islam’s most sacred spaces.

The main goal of the Hajj and the holiest shrine in Islam is the Kaaba, meaning “cube” in Arabic: a square building draped in a silk and cotton veil. Pilgrims gather in the courtyard of the Masjid al-Haram around the Kaaba. Then they undertake the ritual of tawaf, circulating around the Kaaba, during which they hope to kiss and touch the Black Stone embedded in the eastern corner of the building. Even though the Kaaba existed in pre-Islamic times, Muslims believe that Abraham and Ismail constructed it.

According to tradition, it was originally a simple roofless rectangular structure. A door was raised above ground level to protect the shrine from intruders and flood waters. The embedded Black Stone is believed to have been given to Abraham by the archangel Gabriel. Throughout history, Kaaba’s surroundings were expanded in order to accommodate the growing number of pilgrims. Soon, colonnades were built around the open plaza where the Kaaba stands, and other important monuments were incorporated into the sanctuary. In the seventh century, the Kaaba was covered with kiswa, a black cloth replaced annually during the Hajj.

Unlike religious architecture, the religion of Islam brought no new developments in secular architecture. On the contrary, the political and social shifts defined the progress of Islamic architecture. Three factors would significantly contribute to new secular architecture in the lands conquered by the early Islamic Caliphates. New palace architecture would rise in Syria and Iraq thanks to the accumulated wealth, workers, and intellectuals. Great importance was given to urban life and trade, so new cities were founded across the Islamic world, from Morocco to China. Finally, the territories from the Mediterranean in the west and India to the east were united under one culture.

Khirbat al-Mafjar, or Hisham’s Palace, is a prime example of this type of Islamic architecture. It consisted of a square building with an elaborate entrance, an enclosed courtyard, and a number of rooms or halls arranged on two floors. Few of those rooms seem to have any identifiable function. However, at Khirbat al-Mafjar, a private oratory, a large meeting hall, and an anteroom leading to an underground pool have been identified. The main throne room was on the second floor above the entrance. Its plan is not known but probably resembled the preserved throne rooms or reception halls at QaṣrʿAmrah and Mshattā, which consisted of a three-aisled hall ending in an apse in the manner of an ancient Roman basilica.

There are various references in the Qur’an about the Islamic funerary rituals, the most important being described in the story of Qabil and Habil (Cain and Abel). Including many rituals, according to shari’ah, Muslims are bound to bury their dead underground. Even though there are some contingencies between different schools of thought in Islam about tomb-building and grave visiting, these primordial traditions continued in Islam.

The building of burials involved architectural demonstrations that evolved a variety of structures, designs, decorations, and a range of arts and crafts applications. Based on significance and ritual practices, people increasingly constructed tomb structures. Islamic funerary architecture provides us with a variety of mausolea. The mausoleum of Imam al-Shafi’i, the funerary complex of a Mameluke Sultan Qaytbay in Cairo, and Fatimah al-Ma’sumah Shrine in Qom in Iran all showcase the typical diversity of Islamic art.

One of the most important places for all Muslims is the tomb of the Prophet Muhammad in Medina. Today, it is located in the Al-Masjid an-Nabawi, or the Prophets Mosque, which used to be Muhammad’s house. Sultan Qalawoon al-Saalihi was the first to build a wooden dome over the chamber in 1279-1280 AD.

6. Influences of Islamic Architecture in Europe

From the earliest points in history, the Mediterranean was the point where different cultures communicated. The most obvious place of Islamic-European interaction and exchange was Moorish Spain, ruled by a remnant of the Umayyad Caliphate. Originally from Damascus in Syria, the Umayyad engineers brought architectural elements to Spain in the 8th century and reused them in their own buildings, such as the Great Mosque of Cordoba. From Spain, the skills and styles passed to the rest of Europe. Some of the main elements of Gothic architecture, such as the pointed and trefoil arch and ribbed vaulting, come from the influence of Islamic architecture. Both the pointed and trefoil arch can be traced back to the earliest Islamic buildings, such as The Dome of the Rock.

In 12th-century Sicily, a multicultural society existed that mixed Greek, Latin, Arabic, and Jewish cultures and peoples under the rule of Norman kings. The most important Norman buildings have shown multicultural characteristics, with elements of Islamic architecture besides other architectural and artistic elements. The church Cappella Palatina in Palermo was decorated with golden Byzantine mosaics in the typical Christian manner, but the ceiling of the nave had been done in muqarnas vaulting, painted with the scenes of feasts, musicians, dancers, and the figure of the ruling king, probably Roger II, as the Islamic caliph.