Banksy is one of the most sought-after artists of the present and a cultural icon. At the same time, the artist is personally unknown. 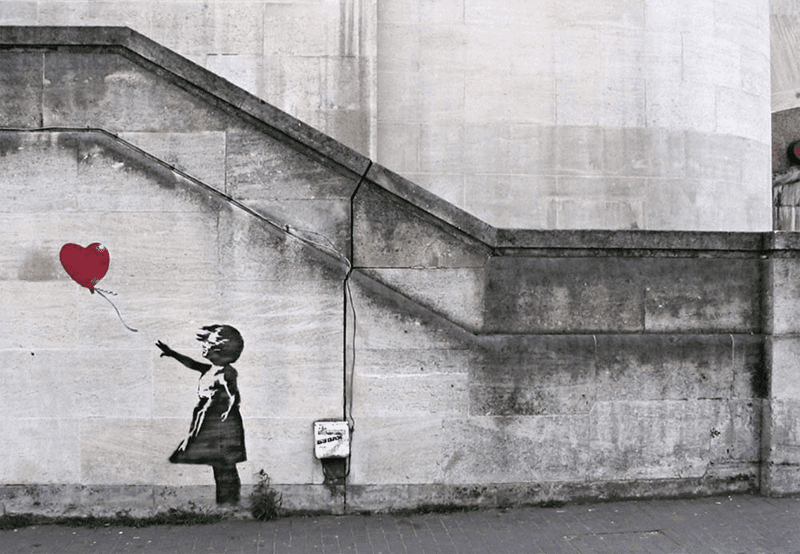 Banksy is one of the most sought-after artists of the present and a cultural icon. At the same time, the artist is personally unknown. Since the 1990s, the street art artist, activist and filmmaker has been hiding his identity successfully. About an artist whose work is famous all over the world while his face is unknown.

The British graffiti artist Banksy is regarded as a master of street art. His satirical and socio-critical artworks regularly achieve the greatest attention and command the highest prices on the art market. Although, no one knows who is hiding behind the pseudonym, Banksy. While his works have been omnipresent for around two decades, the artist has also successfully kept his identity a secret. Beside secretly painted walls and works on boards and canvases, the British artist is admired for his criticism of the advertising industry, the police, the British monarchy, environmental pollution and even of political crises. Banksy’s works of political and social commentary have been featured on streets and bridges throughout the world. The graffiti artist so far worked in countries such as Australia, France, Germany, Great Britain and Canada as well as in Jamaica, Japan, Mali and even in the Palestinian Territories.

However, Banksy is not only criticizing various problems in the world with his art, but he is also not a big fan of the art world itself. The British artist expressed his opinion on the art market with a special art action in 2018 during an auction at Sotheby’s in London. With his action – Banksy was even said to have been personally present – the artist not only shocked the participants of the auction and put the auctioneers in helplessness. He thus gave the entire art market the middle finger for a few seconds – figuratively speaking, of course. Complete destruction of the framed work of art ultimately failed due to the failure of the shredder that was integrated into the golden frame. However, the famous picture ‘Girl with Balloon’ was subsequently sold at a high price. The artist afterward commented on his critical action on Instagram with the words of Pablo Picasso: ‘The urge to destroy is also a creative urge.’

As Banksy’s name and identity remain unconfirmed, talking about his biography is more a subject of speculation. Banksy is believed to be a street artist from Bristol who started spray painting at the age of 14. He is also said to have been expelled from school and has been serving time in prison. Banksy became known as an artist in the 1990s. While everybody is curious about the person behind Banksy since then and a lot of journalists tried to dig his identity, only a few had the chance to meet the artist in person. Simon Hattenstone is one of them. The British journalist of The Guardian described Banksy in a 2003 article as ‘white, 28, scruffy casual – jeans, T-shirt, a silver tooth, silver chain and silver earring.’ Hattenstone explained: ‘He looks like a cross between Jimmy Nail and Mike Skinner of the Streets.’ According to Hattenstone, ‘anonymity is vital to him because graffiti is illegal’.

In July 2019, the British television broadcast ITV has excavated an interview in its archive in which Banksy is to be seen. The interview was also recorded in 2003, ahead of Banksy’s exhibition ‘Turf War’. For the exhibition, the street artist sprayed animals and let them walk through the exhibition as works of art. As a result, an animal rights activist chained herself to the exhibition and was promptly integrated. The two-minute video of the interview was discovered by ITV employee Robert Murphy while researching Banksy. The interview was then conducted by his colleague Haig Gordon, who is now retired. The video, however, does not show Banksy’s whole face either. In it, he wears a baseball cap and a T-shirt over his nose and mouth. The anonymous artist explains: ‘I’m masked because you can’t really be a graffiti artist and then go public. These two things don’t go together.’

While for Banksy being a graffiti artist and going public does not fit, the artist turned street art as an outsider art into the cultural mainstream – a concept that is nowadays called the ‘Banksy effect’. It is due to Banksy that today there is an increased interest in street art and that graffiti is taken seriously as an art form. That is also reflected in the prices and awards Banksy has already won: In January 2011, he was nominated for the Academy Award for Best Documentary for the film Exit via the Gift Shop. In 2014, he was awarded Person of the Year at the 2014 Webby Awards. As of 2014, Banksy was regarded as a British cultural icon, with young adults from abroad naming the artist among a group of people that they most associated with UK culture.

Who is Banksy? Again and again, people have tried to solve the mystery of Banksy’s identity –  without being successful. There are a lot of different theories and speculations, some make more sense others less. But still, there is no final answer.

A video from 2018 entitled ‘Who is Banksy’ summarizes the most important theories about the artist’s identity. One of them seems most plausible so far. It says that Banksy is the comic-strip artist Robert Gunningham. He was born in Yate, near Bristol. Former schoolmates of his have brought this theory up. Besides, in 2016, a study found that the incidence of Banksy’s works correlated with the known movements of Gunningham. Also, in 1994, Banksy checked into a New York hotel and used the name ‘Robin’ for the check-in. And in 2017 DJ Goldie referred to Banksy as ‘Rob’. The artist himself, however, has so far denied any theory about his person.

To maintain his anonymity, Banksy carries out all his work secretly. This means, for all those interested in his art, that one can only speculate about his techniques, just as one can speculate about his personality. Banksy is believed to have started as a regular graffiti sprayer. In his book ‘Wall and Piece’ the artist explains that in the past he always had the problem of either being caught by the police or not being able to complete his work. So he had to think of a new technique. Banksy then devised intricate stencils to work faster and also to avoid overlapping of the colour.

Banksy also uses the tactics of communication guerrilla to offer an alternative perspective on political and economic issues. He therefore often changes and modifies familiar motifs and images, as he did for example with Vermeers painting ‘Girl with a Pearl Earring’. Banksy’s version is entitled ‘The Girl with the Pierced Eardrum’. In addition to the implementation of stencil graffiti, Banksy has also installed his work in museums without authorization. In May 2005, Banksy’s version of a cave painting depicting a hunting man with a shopping cart was found in the British Museum. As an influence behind Banksy’s work, mostly two names are stated: the musician and graffiti artist 3D and the French graffiti artist called Blek le Rat. Banksy is said to be influenced by their use of stencils as well as their style.

The most expensive Banksy ever sold is the painting ‘Keep it Spotless‘. With the highest estimated price set at $ 350,000 and the hammer price of $ 1,700,000, ‘Keep it Spotless’ was sold in 2008 at Sotheby’s in New York. The painting, executed in spray paint and household gloss on canvas, was created in 2007 and is based on a Damien Hirst painting. It depicts a spray-painted Los Angeles hotel maid, Leanne, who is pulling up Hirst’s piece to sweep under the painting.

2 Girl with Balloon / Love is in the bin

Number two of Banksy’s Top Art Sold is not the most expensive painting but it is seen as one of the most surprising. That is because it changed its whole presence exactly at the moment it was presented at an auction. Based on a mural graffiti from 2002, Banksy’s Girl with Balloon depicts a young girl letting go of a red heart-shaped balloon. The image itself was voted Britain’s most popular image in 2017. At the auction in 2018, the buyers and the audience were quite surprised as the piece started to self-destruct through a shredder that was hidden in the frame. It was the moment when ‘Girl with Balloon’ turned into ‘Love is in the bin’. However the painting was almost destroyed, a hammer price of $ 1,135,219 was reached. Before the painting was estimated at $ 395,624.

‘Simple Intelligence Testing’ consists of five pieces of oil on canvas and board that tell one story together. Banksy created these paintings in 2000. The artwork tells the story of a chimpanzee undergoing an intelligence testing and opening safes to find its bananas. The story ends with this especially clever chimpanzee stacking all the safes on top of each other and escaping the laboratory through the ventilation opening on the ceiling. ‘Simple Intelligence Testing’ was sold in 2008 during an auction at Sotheby’s in London at $1,093,400. Before the price was set at $ 300,000.

Executed in 2006, ‘Submerged Phone Boot’ features a quite faithful replica of the world-famous red phone booth used in the UK, emerging from the cement pavement. ‘Submerged Phone Boot’ can be read as a piece that shows the artists’ humor but also it shows a part of Great Britain’s culture dying. The piece was sold at a Philips, De Pury & Luxembourg auction in 2014. The buyer paid a price of $ 960,000.

5 Bacchus At The Seaside

‘Bacchus At The Seaside’ is another example of Banksy’s taking a famous artwork and transferring it into a classic Banksy. The work Bacchus At The Seaside was auctioned by Sotheby’s London during Contemporary Art Evening Auction on March 7th, 2018. It had the highest estimated price of $489,553 but was sold for an impressive $769,298.

Banksy is one of the pioneers of contemporary art and is responsible for ensuring that street art is seriously perceived as art – at least by most of the people. Some, however, also interfere with Banksy’s work. And this is mainly due to his art form. Still, Banksy’s work is sometimes dismissed as vandalism, as a crime or as simple ‘graffiti’.

By Alexandra KargBA Art History & LiteratureHey! I am Alexandra Karg. I am researching, writing and lecturing on topics in the field of art and culture. In my hometown of Berlin I completed my studies in literature and art history. Since then I have been working as a journalist and writer. Besides writing, it is my passion to read, travel and visit museums and galleries. On TheCollector.com you will find articles by me about art and culture, especially about topics referring to the 20th century and the present.