HomeArtistsBarbara Hepworth: The Life and Work of the Modern Sculptor

Barbara Hepworth: The Life and Work of the Modern Sculptor

Barbara Hepworth was one of the most influential modern sculptors of the 20th century. During her lifetime, she created a collection of abstract sculptures characterized by dramatic forms and curves. 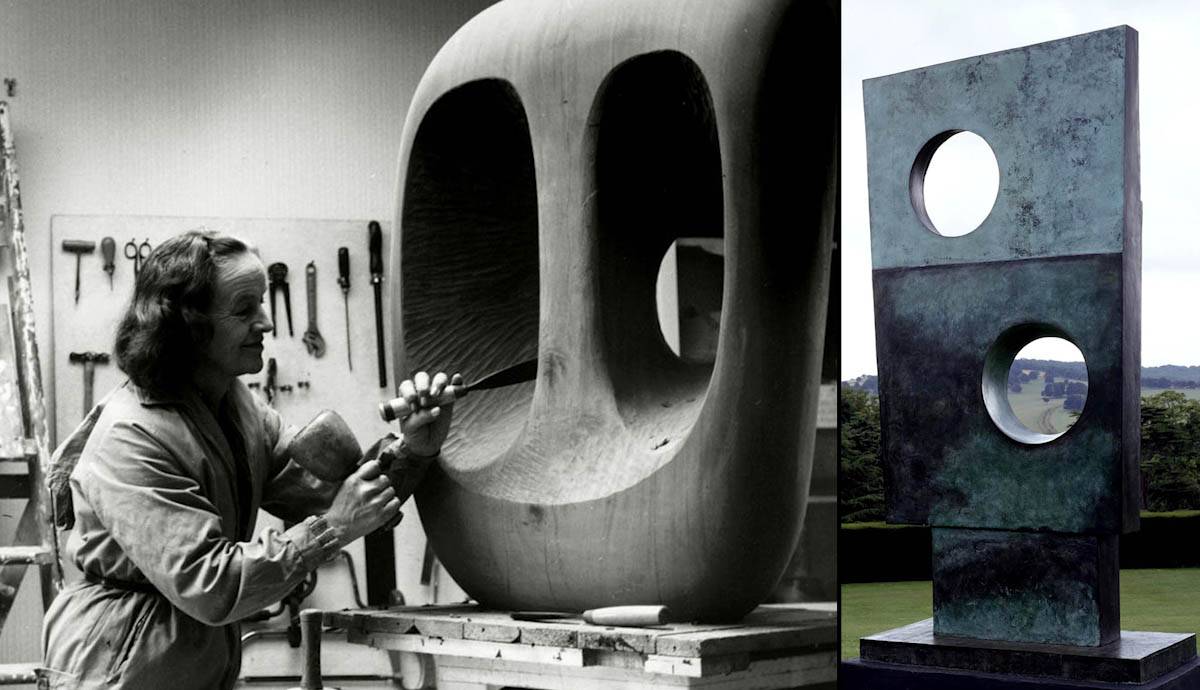 Barbara Hepworth was one of the first artists who created abstract sculptures in England, and her work is still relevant today. The distinctive pieces of the English sculptor influenced the works of several other artists, such as Henry Moore, Rebecca Warren, and Linder Sterling. Hepworth’s work was often shaped by the circumstances in her life, like her experience with nature, her time in the seaside town St Ives, and her relationships. Below is an introduction to the life and work of the impressive sculptor Barbara Hepworth.

Barbara Hepworth was born in 1903 in Wakefield, Yorkshire. She was the eldest child of her mother Gertrude and her father Herbert Hepworth, who was a civil engineer. From 1920 to 1921, Barbara Hepworth studied at Leeds School of Art. There she met Henry Moore who also became a famous British sculptor. She later went on to study at the Royal College of Art in London from 1921 to 1924.

Hepworth received a West Riding Travel Scholarship after she graduated in 1924 and spent the next two years in Florence, Italy. In Florence, Hepworth married fellow artist John Skeaping in 1925. They both returned to England in 1926 where they would exhibit their sculptures in their apartment in London. Hepworth and Skeaping had a son in 1929 but they separated three years after his birth and divorced in 1933.

In 1932, Hepworth began to live with the artist Ben Nicholson. Together, they traveled around Europe where Hepworth had the chance to meet influential artists and sculptors like Pablo Picasso, Constantin Brancusi, Georges Braque, Piet Mondrian, and Wassily Kandinsky. Barbara Hepworth had triplets with Nicholson in 1934 and married him in 1938. They moved to the seaside town St Ives in Cornwall in 1939, shortly before the outbreak of the Second World War.

Since her childhood, Hepworth was intrigued by the textures and forms found in nature. In a movie about her art from 1961, Hepworth said that all her early memories were of forms and shapes and textures. Later in life, the landscapes surrounding her became an important inspiration for her work.

In 1943 she wrote “All my sculpture comes out of landscape” and that she is “sick of sculptures in galleries & photos with flat backgrounds… no sculpture really lives until it goes back to the landscape, the trees, air and clouds.” Barbara Hepworth’s interest in nature influenced her sculptures and the documentation of them. She photographed her artworks in natural environments, which is also how her art was often shown in the media.

The landscape of St Ives had a particularly significant influence on Barbara Hepworth’s art. During the years of the war, which Barbara Hepworth spent in the natural setting of St Ives, the local scenery became an important part of her work. The English Sculptor said that “it was during this time that I gradually discovered the remarkable pagan landscape […] which still has a deep effect on me, developing all my ideas about the relationship of the human figure in the landscape”. After moving to the seaside town in 1939, Hepworth started to create pieces with strings. Her Landscape Sculpture is an example of these stringed artworks. She described how the strings were the tension she felt between herself and the sea.

Considering the smoothly curved forms and even looking surfaces of Barbara Hepworth’s sculptures, it is no surprise that the experience of touch was an important part of her art. For Hepworth, the sensory experience of three-dimensional artworks should not be limited to sight. She thought that direct and tactile contact with the object is equally important for perceiving the sculpture in front of you. Hepworth was also aware of the viewer’s desire to experience her sculptures through touch.

When creating her abstract sculptures, Hepworth was also concerned with the depiction of complex relationships and tensions in her work. This depiction involved social and individual relationships as well as the relationship between humans and nature. For Hepworth, the main sources of inspiration were found in the human figure and landscapes. She was also concerned with relationships and tensions that could arise when working with the materials for her sculptures. This fascination with the tensions between different colors, textures, weights, and forms resulted in her mesmerizing artworks. Her sculptures seem to connect the feeling of dark and bright, heavy and light, and complex and simplistic.

Barbara Hepworth was famous for creating holes in her abstract pieces which is something that was not at all common in British sculpture. The use of negative space through the creation of holes in her sculptures became a characteristic feature of her work. Two years after Barbara Hepworth’s first child was born in 1929, the English sculptor created the first hole in one of her sculptures. The piercing of her works gave Hepworth the possibility to create more balance in her sculptures, such as the balance between mass and space, or between material and the absence of it.

Barbara Hepworth used the method of direct carving to create her sculptures. This was an unusual approach for making sculptures since sculptors of the time would traditionally prepare models of their works with clay which would later be produced in a more durable material by a skilled craftsman. With the technique of direct carving, the artist would sculpt the material, like wood or stone, directly. The outcome of the actual sculpture was therefore determined by every act that the artist carried out on the initial material.

This way, the relationship between the sculptor and the finished artwork can be interpreted as closer than to a piece that is produced according to a model. Barbara Hepworth described the act of carving by saying: “The sculptor carves because he must. He needs the concrete form of stone and wood for the expression of his idea and experience, and when the idea forms the material is found at once.”

The relationship between mother and child is a recurring theme in Barbara Hepworth’s art. The sculpture Mother and Child from 1927 was one of Hepworth’s earliest works. She created the piece only a few months before her first child was born. The sculpture depicts the unified connection between a mother and her child in a more realistic way in contrast to her later works which became more abstract after the year 1934.

Hepworth created another sculpture called Mother and Child in 1934, which was the same year her triplets were born. The later piece exhibits simpler forms and a more abstract depiction of the subject. The sculptures do not only show how Hepworth’s style evolved into a more abstract approach, but they also illustrate how the theme of motherhood remained relevant to her work.

The sculpture Pelagos was inspired by the seaside in St Ives and is fittingly named after the Greek word for sea. The English sculptor described the making of Pelagos and the inspiration she received from the sea, the landscape, and the environment of St Ives by saying “There was a sudden release from what had seemed to be an almost unbearable diminution of space and now I had a studio workroom looking straight towards the horizon of the sea and enfolded […] by the arms of the land to the left and the right of me.“

Due to its sharp and angular lines, the sculpture Squares with Two Circles differs from Hepworth’s other pieces that are characterized by organic shapes and soft curves. The monumental sculpture is intended to be placed outside so that the piece interacts with its surrounding landscape. In 1963, the year the sculpture was made, Barbara Hepworth said that she preferred it if her work was shown outside.

Barbara Hepworth died in 1975, but her legacy lives on. Two museums have been named after and dedicated to the English sculptor. The Hepworth Wakefield is an art gallery in Yorkshire that exhibits modern and contemporary art. It was built in 2011 and named after Barbara Hepworth who was born and raised in Wakefield. The museum shows a collection of her work, and also exhibits artworks from her likeminded artistic friends and contemporaries, including Ben Nicholson and Henry Moore.

Barbara Hepworth’s home and studio in St Ives, where she lived from 1950 until she died in 1975, today functions as The Barbara Hepworth Museum and Sculpture Garden. Her family opened the museum in 1976 according to the artist’s wish; Hepworth wanted her work to be exhibited in the same place where she lived and created her art.

How Much Does Picasso Owe to African Art?
By Lisa Modiano, in Artists
The Controversial Art of Santiago Sierra
By Stefanie Graf, in Artists